Photo: Mike/Flickr
By Amy Stephenson - Published on September 23, 2014.
San FranciscoUpper Haight
Back in June, we met Christian Calinsky and Carlie Leduc, the pair behind the new homeless outreach program Taking It To The Streets. We recently checked back in with the couple and learned that they've been hard at work fundraising, gaining their nonprofit status, and, well, taking food and supplies to the streets.
They've also been working with the city to establish a unique pilot program wherein kids on the street can work to clean up the neighborhood in exchange for housing.
Currently, Taking It To The Streets is set to employ four kids ("ambassadors," in Calinsky's words) living on the street to do jobs like covering up graffiti, cleaning sidewalks, and helping to liaise between business owners and the street population (for instance, if a business owner is having a problem with a particular street kid, they can approach one of the ambassadors to resolve the issue). In exchange for the work, the kids will get housing for a year and food, with the annual budget to house and feed all four set at $25,000.
The exact source of the funding is still being worked out—it'll either come from the city's discretionary fund (according to Vallie Brown of Supervisor Breed's office), from merchant donations, or some combination of both. Calinsky is also considering a neighborhood fundraiser, perhaps in the form of a bar crawl.
We spoke to Calinsky, who's been working with the kids on his block,  to get a feel for what the program might look like. In one example, he noted that about 15 kids helped out at the recent Haight St. Music & Merchants Festival by picking up trash and hauling barriers. According to Calinsky, graffiti and other crimes on the 1400 block (where Mom's Body Shop, the program's home base, is located) are down, and the relationship between merchants, neighbors and the street population seems to be improving. 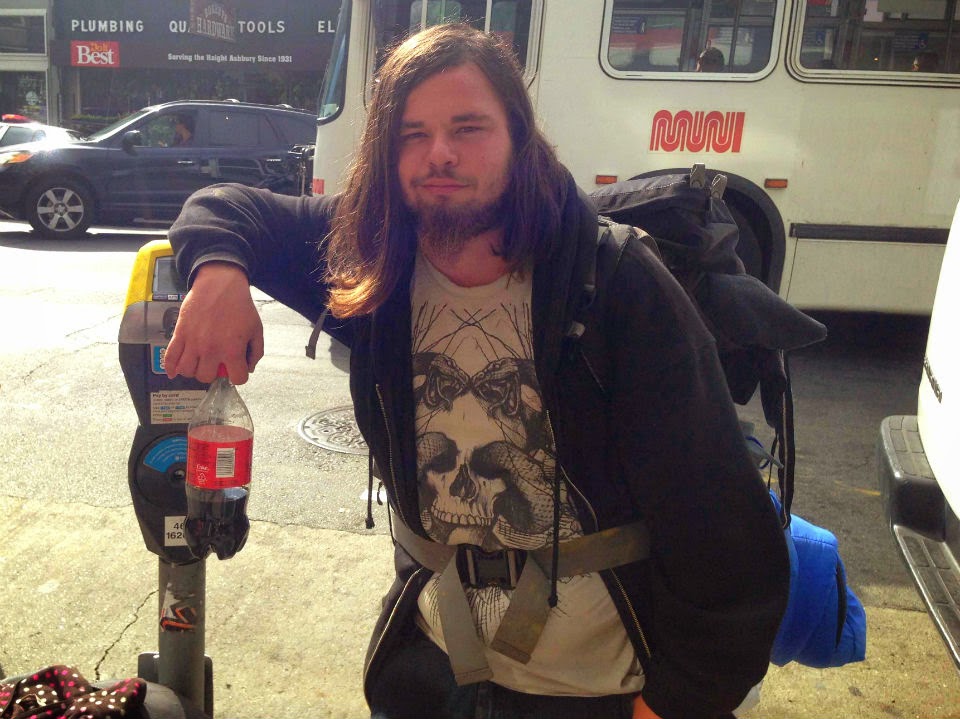 Calinsky also introduced us to two of his ambassadors. Raven (pictured above), 22, hails from Boulder and Santa Fe. Raven explained that he was heavily involved in the Occupy movement a few years back, and through the process of going from city to city, he found himself homeless. Now, he is trying to get his life back on track, and he sees this opportunity as vital to that process.
We also met Thor, 24, who hails from "sort of all over the East coast." He prefers not to be pictured, and says the reason that he's homeless is that he has yet to come out as gay to his parents. He's also looking for a way off the street.
Both Thor and Raven will be training with the Department of Public Works this Friday, with the DPW supplying all the equipment that the ambassadors will need— brooms and dustpans, for instance—and the ambassadors shadowing city employees and learning the ropes.
After that, they'll work Monday through Friday trying to prettify the neighborhood and build positive relationships with merchants and neighbors, so if you see them working around the area, go ahead and say hello.
San FranciscoUpper Haight
About 12 hours ago