Photo: Allison Y.
By Rose Garrett - Published on October 23, 2014.
San FranciscoAlamo SquareCastro
Fender benders and drivers behaving badly are nothing new, but a few brazen incidents of vehicular mayhem caught our attention this week.
First, an anonymous witness uploaded footage taken this past Tuesday of a driver in the Castro trying to evade accountability by driving onto the sidewalk on the east side of Castro Street near 19th.
According to the anonymous source, the driver of a black sedan with Pennsylvania license plates hit three cars in a row—including an Uber with passengers—while driving southbound on Castro Street. The driver then parked a few spaces up on Castro Street near 19th.
According to the witness account, the Uber car drove up beside the car to block it in and call the cops. The black sedan driver allegedly left his car at this point and assaulted the Uber driver, knocking him out and tried to steal his car (or possibly move it) while passengers were still inside. The driver then got back into his car, jumped the curb and drove down the sidewalk to find an escape route back onto the street, as you can see in the video below.
A person in the background of the video can be heard yelling, "Get off the sidewalk. Watch out! He's wasted!"
According to SFPD spokesman Albie Esparza, the incident was the result of a carjacking, and the culprit is still at large.
Last night/this morning, the action moved up to the Alamo Square area, where local resident and prolific tipster Allison Y. reported a dramatic crash at Fillmore and Hayes shortly before 1am. Though she didn't get to the scene until after the incident, she says witnesses reported that a drunk driver drove up Hayes and smashed a grey sedan into the vacant corner store:

"It looks like he might have accelerated when he hit the building and curved back around to smash the car parked on Fillmore. Witnesses said he tried to keep going or back up to get away but I guess the car was toast at that point ... The driver got out and checked his car and then apparently took his front license plate (but not the rear) and took off down Fillmore toward Grove." 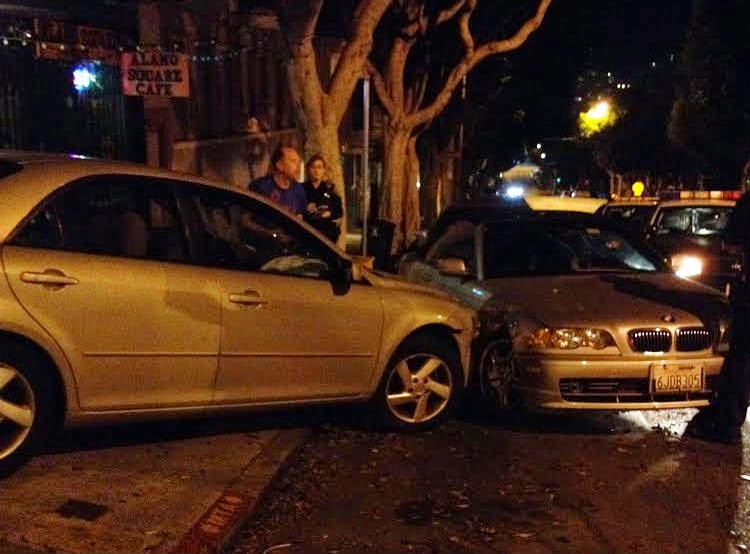 By then, Allison says a group of neighbors had gathered on the corner, and one witness jumped into a police car to chase down the suspect. Two cabs—at least one of which had been hit by the fleeing car—also apparently followed the driver. The account continues:

"Then the neighbor who rode off with the police came back a few minutes later and said they'd found the guy ... and when they went up to him he immediately said, 'It wasn't me!' and the cops were like, 'Yeah, we haven't asked you anything yet...' and cuffed him."

The drunk driving incident came the same night that a 2013 Chevy SUV sped from the scene of a violent robbery on Scott Street between Fulton and McAllister. As the Examiner reports, four men were arrested after a robbery and assault near Alamo Square around 6:20pm last night, which saw one man robbed of his camera and another man struck in the back of the head after trying to help.
According to the SFPD, the four suspects fled to the Tenderloin in the SUV and were arrested at McAllister and Leavenworth streets.
Add last week's nasty collision involving another SUV fleeing the scene of a crime and last month's very strange tale of a DPT officer on the hood of a car to this week's drunk driver, carjacking, and speeding escape vehicle, and you've got the makings of a very bad month on city streets. Be careful out there, folks.
San FranciscoAlamo SquareCastro
Jul 01, 2022