Photo: Camden Avery/Hoodline
By Camden Avery - Published on October 31, 2014.
San FranciscoUpper Haight
This Halloween, we're bringing you a chapter out of the Haight's eerier past: the story of 636 Cole Street, known to some as the Charles Manson house.
The building, built in 1903 and since sold, condoized, and witness to a long life of normal, happy behavior, was for a brief time during the late 1960s home to Charles Manson and his budding 'Family'.
The city of San Francisco has designated 636 Cole a "potential historic resource," and tourists of the macabre come to see the house frequently, but Manson lived in the house for a surprisingly short time. Before the Tate-LaBianca murders, before the move to Spahn Ranch outside Los Angeles and the trials and Helter Skelter, Charles Manson spent between April and November of 1967 in the Haight.
For a few short months, he resided at 636 Cole with early recruits into his Family: his girlfriend Mary Brunner, a librarian in Berkeley; Susan Atkins; Patricia Krenwinkel; and Lynnette "Squeaky" Fromme, who famously went on to attempt an assassination of President Gerald Ford years later.
Here's a snapshot of the Family after the move to Spahn Ranch, from which the group perpetrated their most notorious murders in 1969: 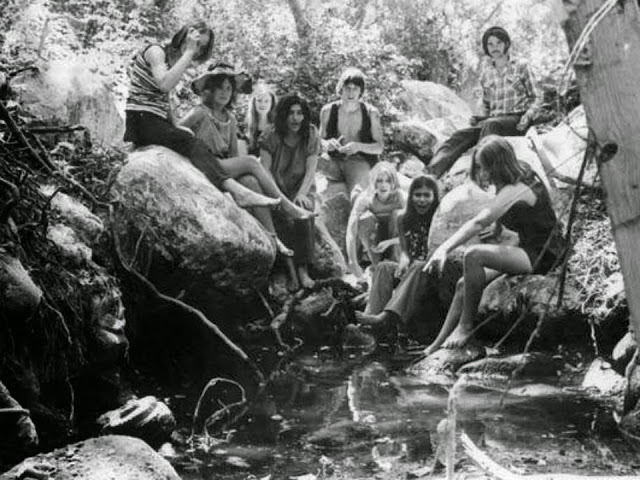 Photo via Murderpedia
The reason Manson's presence in the Haight during the Summer of Love resonates with the historically inclined, though, is that he was in many ways essential to it—the Haight during the Summer of Love was an enormous influence on Manson's life, and his presence in the Haight became representative of the trajectory of the Free Love movement from edenic idealism  into hard drugs, violence and chaos.
As Joan Didion pointed out in Slouching Towards Bethlehem and The White Album, Manson became, like the Haight, one of the defining keystones of the 1960s. 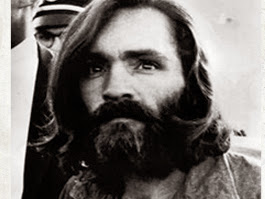 (Photo via Flickr/Mitch Hell)
There are two key books about Manson: the seminal Helter Skelter, by prosecuting attorney Vincent Bugliosi, which chronicles Manson's trials and a brief exposition of his time in the Haight, and Jeff Guinn's recent Manson, a more typical biography that documents the influence of the Haight on Manson's development around the end of the 1960s.
According to Bulgiosi and Guinn, the Haight in the Summer of Love was a perfect setting for Manson: the cultural orphans, the idealists, and the vague dissociation brought on by a barter marijuana economy and $1-a-dose Owsley LSD made a natural magnet for potential followers who were looking for meaning, guidance, or a guru. The communal environment of the Haight (pictured above in an early 1970s photograph by Calvin Welch) was exactly what attracted Manson: it was a perfect vehicle for attracting new followers and growing his family.
The Haight was also host to other countercultural icons at the time, some of whose paths crossed with Manson.
According to Guinn, towards the end of the summer of 1967, a darker tone started taking hold in the Haight. In one case, a Haight theater hosted "The Invocation of My Demon Brother," a screening of an Aleister Crowley project put together by occult filmmaker Kenneth Anger, who was directing Lucifer Rising at the time.
And Family member Susan Atkins came to Manson by way of Anton LaVey (later the founder of the Church of Satan), who hired her to be a topless female vampire in his Witches' Sabbath.
Both Kenneth Anger and Anton LaVey also spent time at the historic Westerfeld House on Alamo Square, along with future Manson follower Bobby Beausoleil.
According to Guinn, Manson wasn't much into LSD or competing cults in the neighborhood: he was mostly serious about recruiting followers and trying to get his career as a musician off the ground, which was ultimately the reason he packed up in November of 1967 and headed south to set up camp in Topanga Canyon, and thence to begin his group's more gruesome phase.
With that, Manson's tenure in San Francisco ended, and with it another bizarre chapter in the life of our neighborhood.
Happy Halloween, everyone.
San FranciscoUpper Haight
About 19 hours ago