Photos: Wes Rowe
By Stephen Jackson - Published on October 21, 2014.
San FranciscoCastro
Hungry? Thirsty? Starting tomorrow (Wednesday October 22nd) you can enjoy a newly revamped food and drink menu at Lookout. Excited about the recent signing of a new 10-year lease, owner Chris Hastings is ready to bring some fresh flavors to dedicated regulars and newer patrons alike. Brought to you by Wes Rowe of Wes Burger and Lookout mainstay Michael Breshears, the bar's entirely new set of offerings seeks to speak to the city's expanded tastes in food and cocktails.
First, the food. The new menu consists of a variety snacks, including the Dirty Balls ($8), which is their take on risotto arancini with beef and a “NOLA twist”. You get four per order, and it’s served with remoulade. They will also offer chicken wings ($12) in three different varieties (classic buffalo, sticky sweet, salt and pepper). According to Wes, they are prepared in a "dry fry" style akin to those found at the famed San Tung of the Inner Sunset.
Also on the menu is Tex-Mex Style Queso ($8), a creamy cheese dip with housemade tortilla chips. "It’s my favorite thing and it was mandatory for me," Wes told us. "I told them that they needed to include that on the menu, or I wasn’t going to take the job." For an extra three bucks, you can add spiced ground beef to the dish.
Those in search of even heartier fare should note that Lookout now serves “Castro’s Best Burger” ($11), served on a Pinkie’s challah bun and with your choice of tots, mixed greens or fries. If you’re already familiar with Wes’ burger pop-up over at Divisadero’s Mojo Café on Wednesday nights, then you’ll be pleased to know that it’s prepared in the same way, using ground brisket and cooked on a cast-iron skillet. Here, the burger comes with fried onion, American cheese, pickles and mustard (add bacon for $2).
Not in the mood for a burger? Try a pizza, served with Zoe’s Meats. They have a variety of pies, including Italian Stallion ($18), which comes with pepperoni, sausage, caramelized onions, provolone cheese, and marinara, and the Bacon and Blue ($16), served with bacon, bleu cheese, cherry tomatoes, and caramelized onions. You can also head down south of the border-way and try a pair of tacos in four choices, including fried chicken (two for $8), and veggie (two for $6).
Finally, if you’re still hungry, and need to pick up your buzz a bit, go for a basket of Deep Fried tequila Shots ($8). Intrigued? You should be. Basically, they’re boozy squares of cake, deep fried, and served with a strawberry dipping sauce. You can also try the bourbon version, served with a bacon caramel dipping sauce. And yes, they are in fact chock-full of alcohol, so watch out.
Now, for the cocktails. Interestingly enough, this is the first time in four years that they’ve had a drink list of this sort, the reason being that they often experience too high a volume of customers to send out mixologist-caliber drinks in a reasonable timeframe.
Seeking to remedy that, Breshears sought to create a drink menu that kept up with San Francisco drink standards but could also be prepared in a hurry. "We had to do something we could be consistent with," he told us. "We can be high volume, but we can be loungey too…It’s kind of a relief because San Francisco can be so artisanal, right, so it’s nice to be simple."
If you’re in the mood for a refreshing cocktail, go for a Glamorous Life ($8) with Hendrick’s gin, elderflower liqueur, sparkling wine and fresh lemon. If you feel like partying, grab a Como La Flor, made with Altos tequila, hibiscus syrup, pomegranate juice, triple sec, and served with a Tajin-rimmed glass. Finally, if whiskey is your vice of choice, try a Kentucky Tea Dance ($10), with Angel’s Envy bourbon, Earl Grey syrup, lemon juice, and Bergamot orange bitters.
Also in celebration of their decade-long new lease, Hastings and the Lookout team did some other "general sprucing up". They bought some new furniture, installed a fancyFunktion-One sound system, and plan to install a new countertop in the main bar.
"I’m really proud of us," Hastings said in regards to reaching this milestone. "It hasn’t been the easiest seven years to be in business, and to only get by, but to thrive is something I’m proud of…recently more and more people have been referring to Lookout as an institution, which is what we set out to do seven years ago."
If you like what you're reading, check out the new menu below and head over to the Lookout tomorrow to try out the brand-new menu. 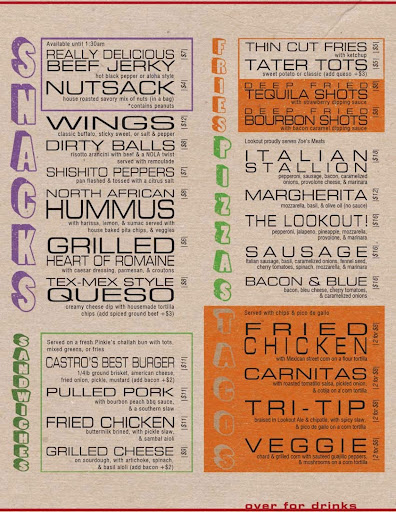 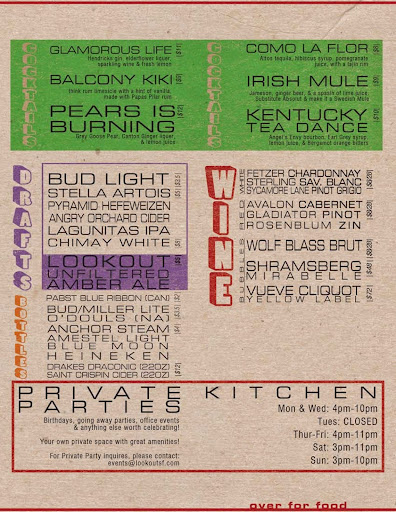