Photo: Andrew Dudley / Hoodline
By Andrew Dudley - Published on November 25, 2014.
San FranciscoLower Haight
Though he lives in North Beach, artist Jeremy Fish and his work should be more than familiar to residents of the Lower Haight. After all, the man has been adorning the neighborhood with his designs for years, creating pieces like the current Upper Playground mural, the former Vapor Room signage, and the once and future bunny sculptures at Haight and Laguna. Not to mention the fact that he used to be a Lower Haight resident himself.
Earlier this month, Fish's creative output took a backseat to a much more serious challenge: a large brain aneurysm, the treatment of which required six hours of surgery.
Today he's on the mend, but not quite out of the woods. Fish took a few minutes recently to tell us about his ordeal, his upcoming projects, and the things he's feeling especially thankful for these days.
Hoodline: Regarding the aneurysm, how and when did you first learn that something was wrong?
Jeremy Fish: I have had really bad migraines since I was a kid. I started having new strange headaches, blurry vision, and memory issues. My wife and my close friend Martin [Olive, of the Vapor Room] took me to get it checked out, and they found a big-ass aneurysm. I named him Biggie Smalls. 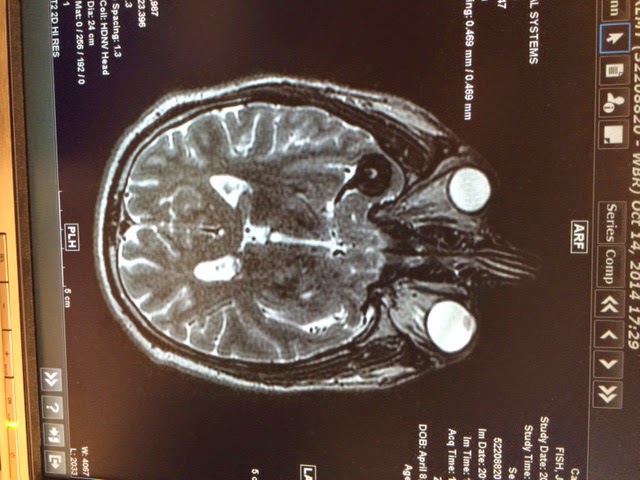 Image courtesy of Jeremy Fish
H: Do you know what caused it?
JF: They aren't sure exactly. Stress, tension and anger can affect blood flow, and are possible causes of brain injury. There is no real proof that is what caused mine. However, as a self-employed dude with a staff of just me, I deal with a shitload of all three, and I know that my levels were unhealthy. I'm Italian, stressed out, a workaholic, and hot-tempered. I'm glad I discovered it before I had a stroke, or worse.
H: Where did you have the surgery performed, and how long did it take?
JF: My surgery was at the CPMC, and was performed by Dr. Kim and Dr. English. The surgery was six hours long, and I was only in the hospital a few days.
H: What were you thinking and feeling going into it?
JF: I was bummed to have to take so much time off. I was also upset I had to change my lifestyle and habits so dramatically. I was afraid it would affect my artwork, and creativity levels. Overall bummed, upset, and afraid. Not just of the procedure, but of the results, and effects on my life and my job. Massive thanks to Martin, Dr. Kim and Dr. English and the whole staff at CPMC. 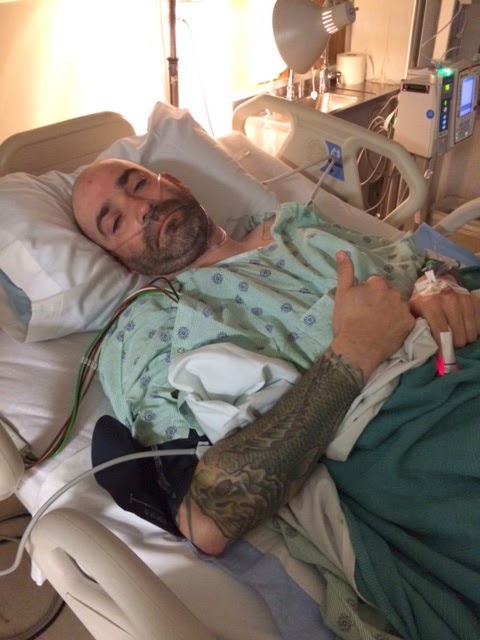 Photo courtesy of Jeremy Fish
H: How has your daily life changed now, post-surgery? Do you have to limit or change certain activities?
JF: It's only been two and a half weeks. I just started drawing again this week slowly. I still have really bad headaches, blurred vision, and memory loss still. My main goal has been to learn to relax a bit more, and try not to overload myself with projects anymore. I bought a La-Z-Boy chair, because we don't have any furniture that isn't work-oriented except our bed. I am also going to see an anger management specialist to help me learn how to be less pissed off all the time.
H: Are you totally out of the woods now, or is this something that could recur?
JF: No. I have to have the same surgery in six months to be sure the aneurysm has clotted and isn't pumping blood or growing anymore. I am not looking forward to it.
H: Has it affected your perspective on life at all?
JF: Yes. It made me appreciate my wife, my real friends, and my fan base much more. I am lucky to have this job, and I need to appreciate where I'm at, and be less pissed off about shit that doesn't matter. The world is full of assholes, and I need to learn not to care so much.
H: Any advice for people going through the same thing, or advice on how people can avoid it?
JF: Life is short, try to enjoy it, and not let stress or anger control you. If you have been diagnosed with an aneurysm, and are afraid to get the surgery, don't be. It wasn't too bad overall. I was scared it would be much worse. It can lead to a stroke or worse, and the surgery is nothing in comparison to that. 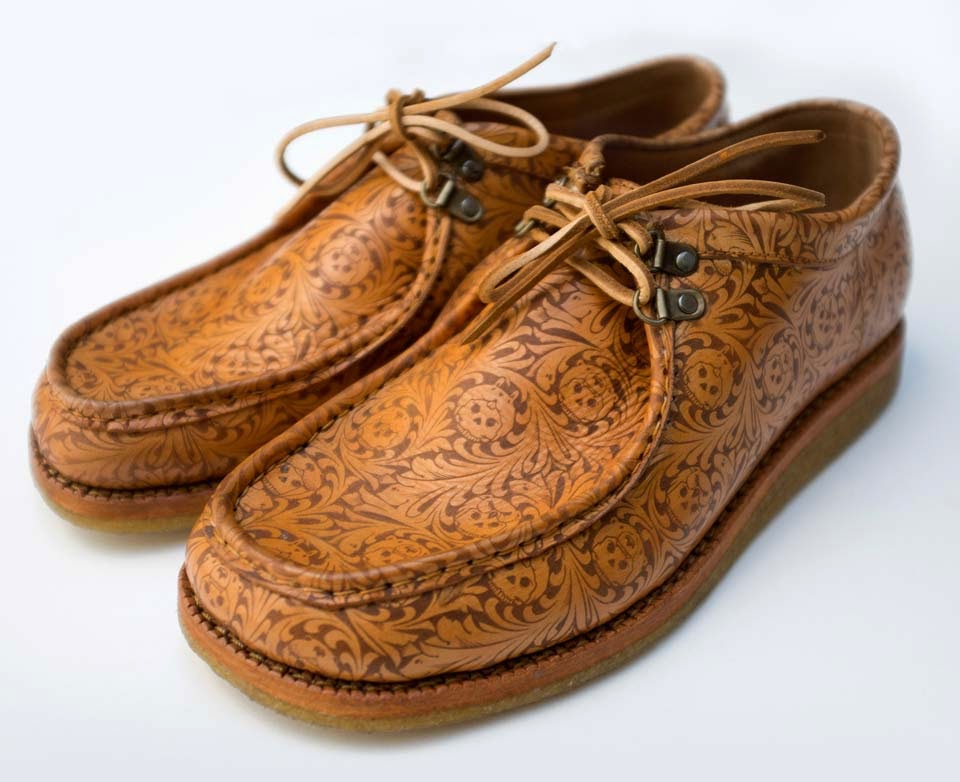 Upper Playground
Though Fish is resigned to work less, that doesn't mean he's not working. In fact, he just designed a custom pair of shoes in collaboration with his friend and neighbor Al Ribaya of Al's Attire in North Beach. They went on sale at Upper Playground last week, and quickly sold out.
"[Al] and I have been working on these for a while," Fish tells us. "Upper Playground is known mainly for art-driven t-shirts, and I wanted to make something more substantial. We sourced special leather, had my design laser etched, and Al is custom-making each pair by hand. We sold 30 pairs in the three days they were available, and I am really stoked for the folks who were able to get a pair. We plan to make some hats and wallets from the additional leather which will be available through Upper Playground very soon."
Other projects on the calendar include the aforementioned bronze bunny, which Fish says is still coming to the new housing development at 55 Laguna, though not imminently.
"We have to work slowly, as the property where he will live won't be finished for a while. I am working with sculptor Brin Berliner, and the Artworks Foundry in Berkeley to make the bronze bunny as big and bad-ass as possible. Thanks again to everyone who contributed to make that happen. Very excited to make my first bronze project 10 feet tall."
Otherwise, Fish says he is taking a break from art shows to let his brain heal. In fact, his next show, which will take place in Denver, isn't scheduled until the summer of 2015, well after his follow-up surgery. In the meantime, "I am designing a concept for a custom car, some fancy urban bicycles, and a concert poster for my favorite rapper," he says.
Despite all those projects, Fish insists he's trying to take it easy.
"Not painting or drawing too much this month, so I can spend more time napping in my La-Z-Boy, chilling with my wife Jayde, and fattening up for the winter."
San FranciscoLower Haight
About 17 hours ago