Yesterday, a public hearing was held at City Hall to discuss the ever-controversial issue of residential parking permits being proposed for the region around Alamo Square dubbed "Area Q."

Turnout at the hearing was noticeably smaller than at the November 10th meeting at San Francisco Day School. At that meeting, the auditorium was filled with 160+ attendees. About 50 or so people spoke at that meeting, offering a variety of opinions. As a result, the SFMTA revisited the plan and made significant changes based on feedback.

Yesterday's hearing, on the other hand, was held at City Hall — well outside the area being discussed — and took place at 10am on a workday, which likely presented a challenge for those with day jobs or other commitments. All in all, about 70 people filled the hearing room yesterday, and of the 35 or so people who spoke, the vast majority expressed strong opposition to the parking permit proposal. 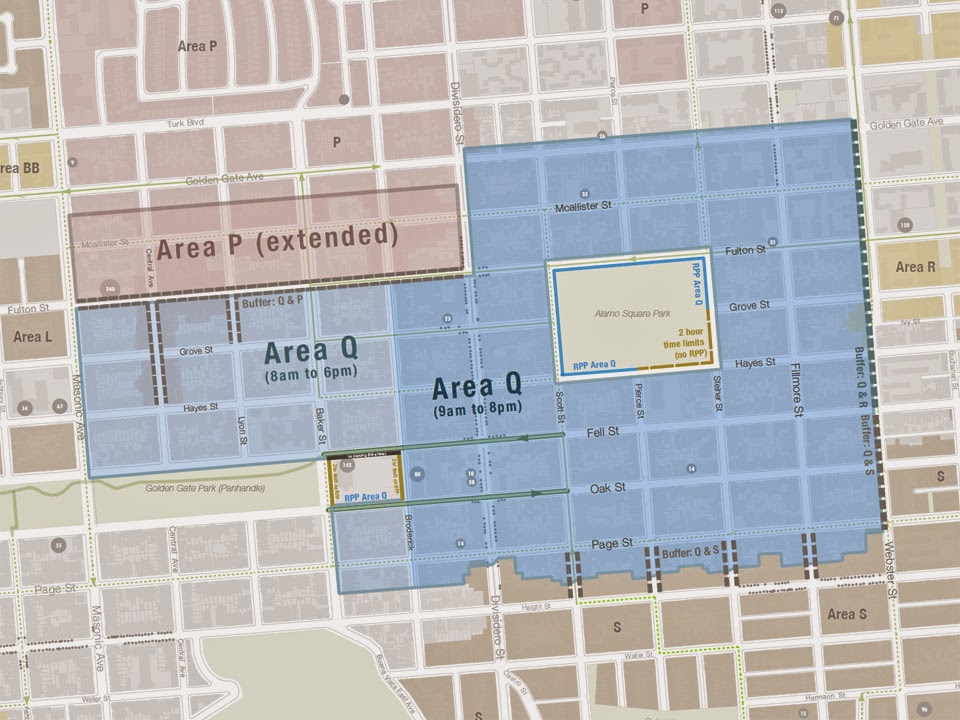 Many of the issues raised had to do with the existence of parking permits in general, though there were some specific concerns about the plan itself. Some felt that the proposed enforcement hours of 9am to 8pm from Broderick east to Webster, between Golden Gate Avenue and Page were much too long. Others voiced concerns about caregivers and nannies who would be forced to move their cars every 2 hours.

Speakers also expressed skepticism about the accuracy of the data collected by the SFMTA that is being used to justify the parking permit zone. 80% of parking spots have to be regularly occupied in order for a neighborhood to receive approval for a residential parking program, and Area Q showed a 91% occupation rate.

In addition, based on a license plate scan, SFMTA determined that 60% of the vehicles in Area Q were registered to a different zip code, which is being interpreted as meaning 60% of the cars in the area are not owned by people living there. Many neighbors pointed out that people often don't switch the registration of their vehicles, and that the data could be interpreted in more than one way. "When you are renting a room, re-registering your car is not something you do," pointed out one resident.

Unlike the November 10th meeting, yesterday's hearing also included a large number of representatives from local churches. Reverends and constituents spoke passionately about the issue, raising concerns that it would affect their communities' ability to attend church services.

Lee Evans from the Second Union Missionary Baptist Church on Page and Pierce spoke on the issue.

"We deserve some consideration," Evans said. "Our building was constructed in 1906. There's no parking there, all we have is what's on the street."

Finally, many residents raised the issue of how the permit proposal originated. The city requires an initial petition of 250 signatures to begin a residential permit parking process; 331 were submitted. However, as many pointed out, this is a large geographical area with thousands of residents, so it's debatable whether 250 people represent a significant portion of the population. Others bemoaned a lack of clarity on how many signatures would be required to oppose the permits, and what that process would look like.

"I've lived in San Francisco for over 25 years," one resident stated. "I've had free parking, for 25 years. This regulation of a right, to pay to have access to what was once free, now charging and threatening tickets, is unconscionable."

All in all, it appears to be a divisive issue amongst residents, a fact that did not go unmentioned. Many seemed upset and angry that an issue was forcing residents to choose sides, essentially pitting neighbor against neighbor. Although the discourse during the two hour meeting was civil, residents' voices were often raised, and applause was frequent when someone got especially fired up.

This was likely one of the last opportunities for public input on the program. The SFMTA Board of Directors is likely to take up the issue at a meeting on either February 17th or March 3rd. If approved, permits could start being sold as early as April, with enforcement beginning in June.

For more information on the proposed Area Q, visit SFMTA.com.