Under One Roof: A Modern San Francisco Church Story

The former sunny yellow facade of Jerusalem Church Of God In Christ at 1660 McAllister St. has undergone a transformation. In the past year, the building has been painted a rich brown, and the sign has been removed. People still come and go, but for any curious onlooker it's unclear what the building is being used for.

In fact, the church is still in operation there, but in an unorthodox arrangement, it's picked up another congregation to share its space. Now, Redemption Church and Jerusalem Church of God in Christ share the same building, but hold separate services for their respective—and very different—communities.

Jerusalem Church of God in Christ is a historic Pentecostal African American church, headed by Pastor Scott Galbraith. The neighborhood church used to include hundreds of congregants, and in the 1970s it grew out of its former space at Oasis Cafe. In the mid-'80s, Jerusalem Church of God in Christ purchased a two-story parking garage at 1660 McAllister, and turned the bottom floor into its church. 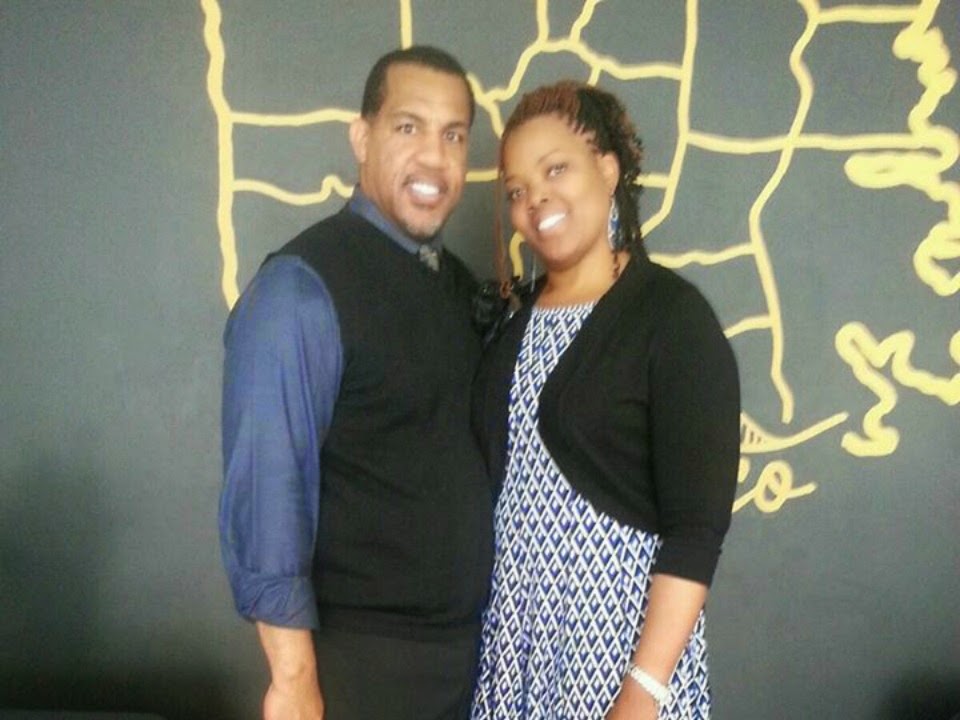 But the neighborhood was changing, fast. "There's been a total gentrification, this area used to be all African American," said Pastor Scott. The church's congregation dwindled, and the space was only being used a couple times a week. Pastor Scott was called in from Detroit by his father, Bishop Albert Galbraith, to bring life back into the space. But times were hard, and the Pastor spent much of his time running a restaurant in Burlingame.

Pastor Justin Anderson of Redemption Church was looking for a congregational home. While driving down McAllister Street one day, he came across Jerusalem Church of God in Christ, and had the divine inspiration that this is where his church should be. He knocked on the door and banged on the windows, but with only one service held a week in the space, no one was there. Eventually, with the help of Facebook, he tracked down Pastor Scott and paid him a visit in Burlingame.

"He walked in, a super-duper hipster with tight jeans on, and told me he was a church planner," said Pastor Scott. "And that's when God moment number one happened. I reached in my pocket and threw him the keys. What black guy throws a white guy who claims to be something a key to his church?"

From the get-go, Pastor Scott refused to charge Pastor Justin and his church rent. The space wasn't being used very much anyway, and he believed in God's message to Pastor Justin that the space should be his church. But it quickly became clear that renovations were in dire need, including a full earthquake retrofitting. Redemption Church offered to pay for the makeover, and Jerusalem Church of God in Christ sold a property across the street to contribute to the fund.

Construction on the new church began in 2013, with a full interior demolition. The whole space "looked like something out the 1970s, with red carpeting," said Dan Birch from Redemption Church. 2013 was spent repairing and rebuilding the space, under the guidance of architect Jack Debartolo, much of whose work focuses on sacred spaces.

On Easter of 2014, both churches were able to hold their first services in the renovated main room of the church. Two different congregations, and two different services, under one roof.

The renovations are still in progress, but should be completed this year. "I think we've got a foundation, when we get it all done it'll be a really cool grassroots church," said Pastor Scott. 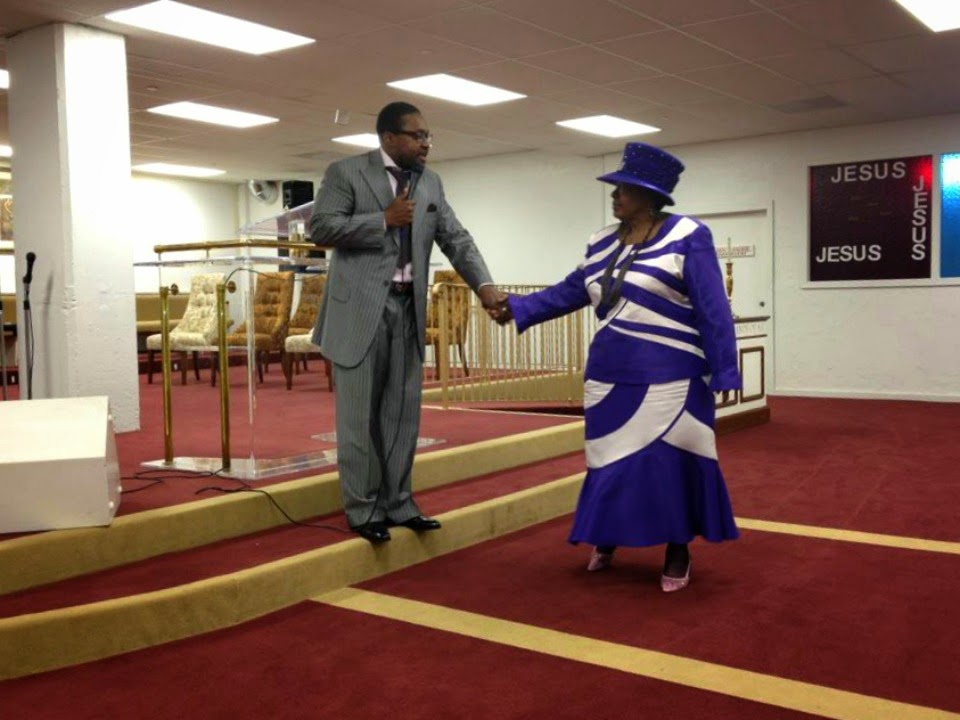 Before the renovations. (Photo: Jerusalem Church Of God In Christ) 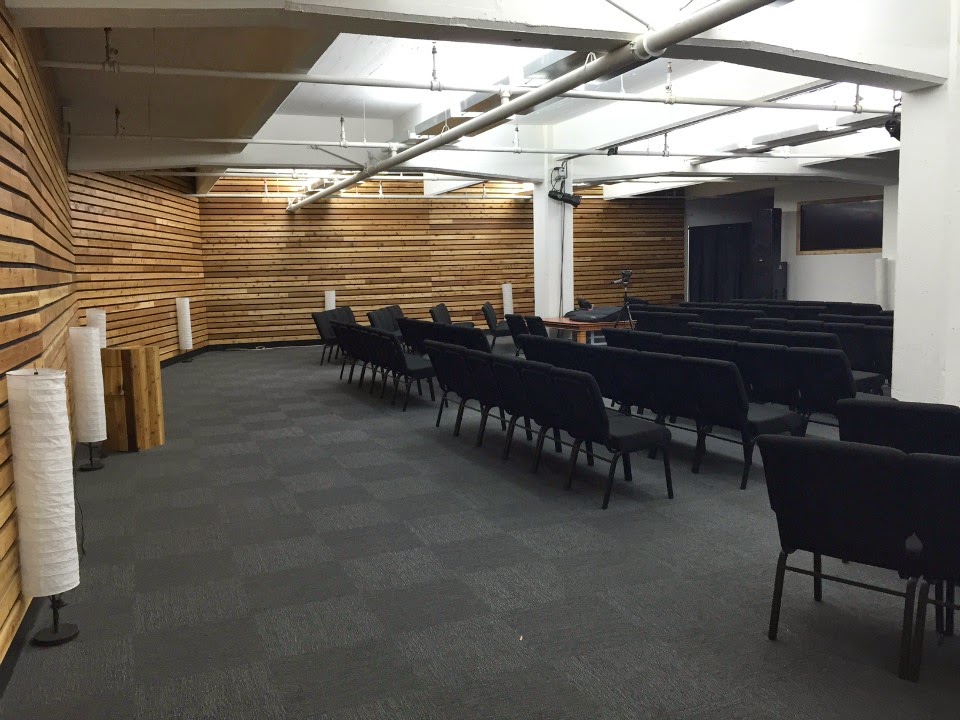 Redemption differs from many of the other churches in the neighborhood. The staff is young—the head pastor under 40. Their youthful enthusiasm for the church renovation project shows, and the large San Francisco map on the wall once you enter is reminiscent more of a tech company than a neighborhood church.

According to Birch, many of the church's constituents work in the tech scene. They have attendees from Google and LinkedIn, and Birch even used the word "launched" to describe the day the church opened its doors.

In keeping with its tech-savvy constituents, Redemption Church has an online forum and community that it calls The City. Members can share prayer requests, photos, and ask questions about faith. At the moment, Redemption has around a hundred congregants, almost all of whom found the place via word of mouth. Sunday services start at 9:30am, and is described as “folk liturgical.”

The church explains that this means honoring the past and its traditions in a less-formal way, in an attempt to "capture some of the aesthetic of the folk-indie bands of the '60s and today." The drum set on stage supports this. As for the Hammond B3 organ it sits next to, that is still only used by the Jerusalem Church Of God In Christ. Their Sunday service starts at 11am, after Redemption's ends.

The concept may seem simple: one building, two congregations, but as Pastor Scott points out, it's an important time for this type of connection.

"In a time when we're picketing and rioting, in a time when there's been a return to civil rights movement, when black people are being shot in the street like dogs, you have black and white people worshipping together. You've got white and black people that care more about how you feel about God than the color of your skin," he said.

"Every day I wake up and can't believe this is happening."

San FranciscoDivisaderoNoPa
About 18 hours ago