Starting at 3am each morning, officers assigned to Park District's Homeless Outreach Team head into Golden Gate Park and other isolated spots to interact with the area's transient population.

One of them is Officer Ryan Crockett, who has a holiday tradition of distributing clothes and water to the people he encounters on his beat. Yesterday, we tagged along to watch him continue the tradition. 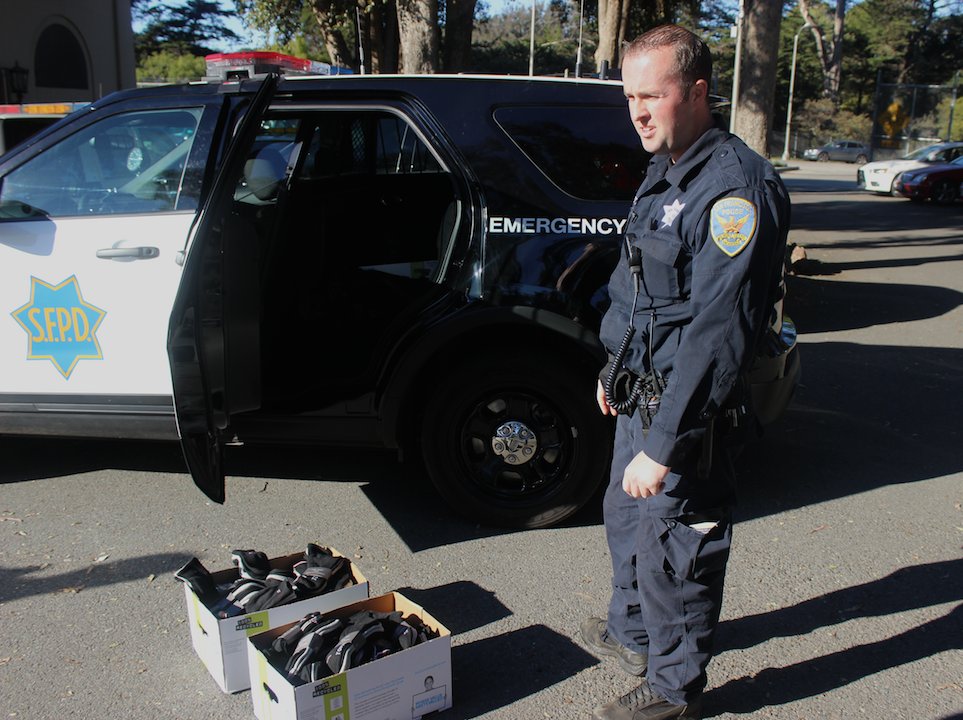 "The first year, I handed out food, and it went okay," said Crockett. "The second year, I gave out socks. The third year, everyone asked me if I was going to give out socks again, so this will be my fourth year doing it." Crockett pays for the socks, blankets and bottled water out of his own pocket, stowing the supplies in the cargo space of his SFPD SUV.

"Socks are a huge hit," he added. "There's a guy that I'll usually help out with a cheeseburger in the morning. I gave him a pair of socks today, and I got a 'Woo hoo!' Usually, I just get a 'thank you.'" 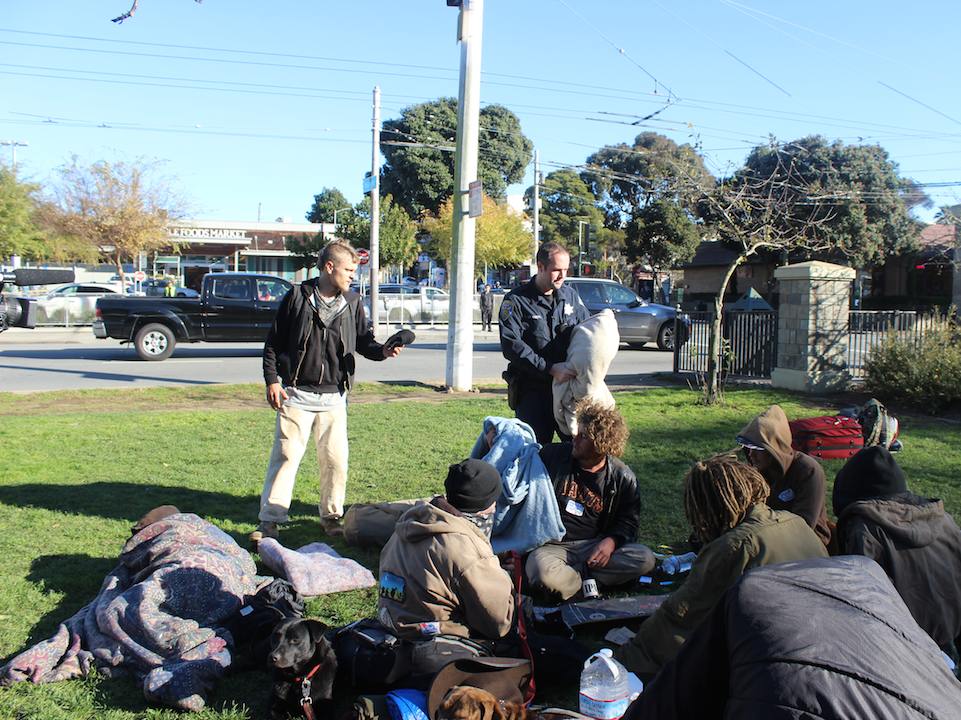 "I buy [the socks] overseas; I have family that travel back and forth," Crockett said. His father lives in Shanghai, where he works in textiles, and his brother returned from a recent trip to China with four suitcases filled with socks. "There were about 500 pairs. I love seeing that many."

"Last year, I wasn't able to bring them back [from China], so I was buying them, and they're pretty expensive here as compared to there," said Crockett. He doesn't know how much he's spent to date: "I haven't really totaled it, but probably hundreds of dollars." 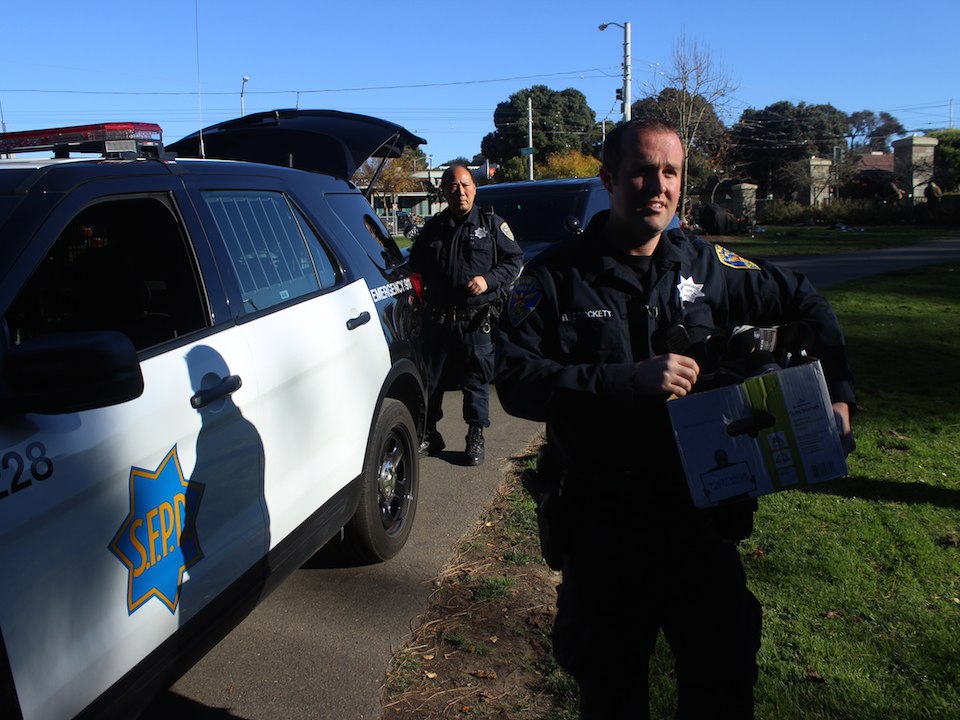 Over the years, Crockett said he's gotten to know many homeless people and Travelers personally. Many of the people we encountered yesterday in Golden Gate Park pass through a few times each year, traveling a circuit that takes them up and down the West Coast. Years ago, Crockett said he was greeted by several familar faces while vacationing in San Diego. 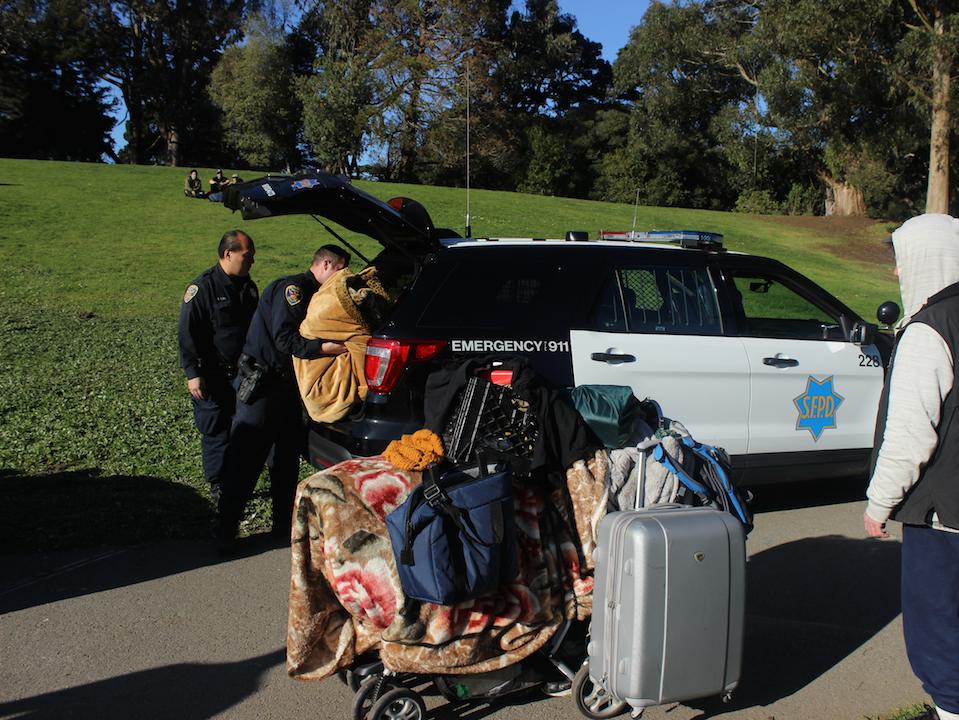 Giving away supplies is outside his job description, but "it's just what's instilled in me," said Crockett. "I'm just doing a good deed daily; it's what I like to do. If I can't do a good deed daily, I've failed at that day." Next year, he hopes to accept donations, so he can distribute socks and blankets in other SFPD districts.

Crockett, who patrols with partner Jeff Sung, said he was pleased to be assigned to the HOT. "Meeting everyone from different aspects of life, especially in the Haight, has been pretty cool," he said. 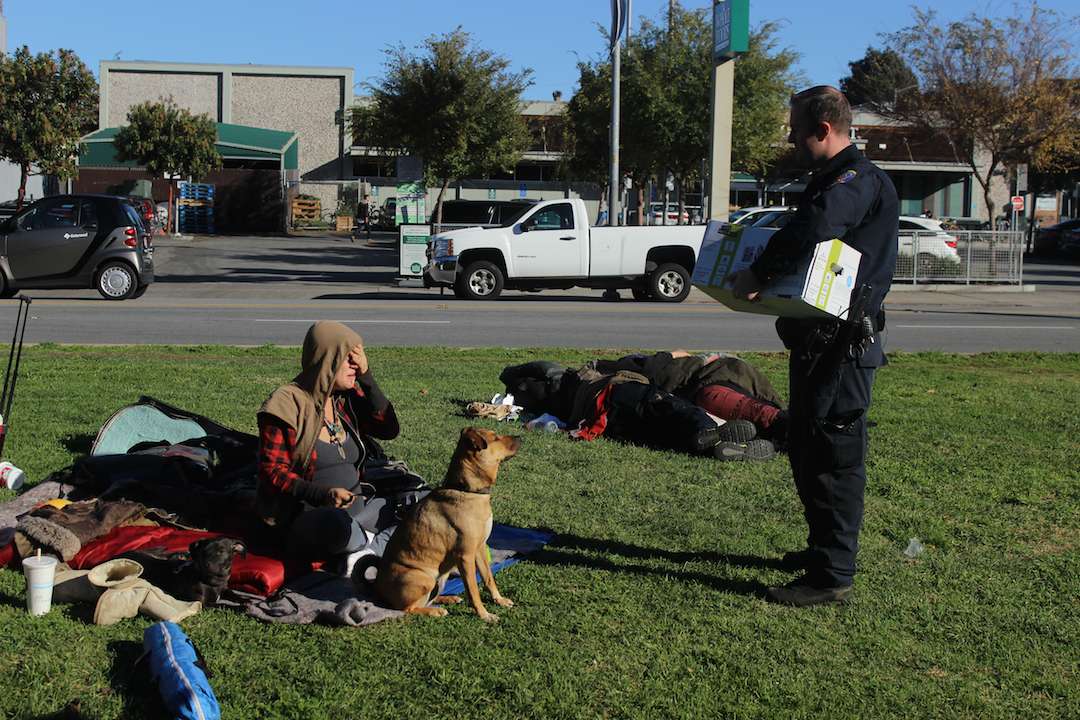 Some of Crockett's giftees had mixed reactions; in more than one case, people expressed suspicion about his motives, or refused help because reporters were present. "You'll get pushback because they don't like cameras, but it's part of the job," said Crockett. "They'll just miss out on a clean, fresh pair of socks today."

A woman who gave her name as Lamp said she appreciated the gesture. "One of the main necessities you need out here is a good, fresh pair of socks," she said, tucking Crockett's gift into her backpack. "We have our shoes on all the time, so boot rot can be a pretty nasty thing. It's always good to keep dry socks with you, so when your feet get wet, you can at least have two pairs."