From Coit Tower to the Beach Chalet, San Francisco boasts some of the best examples of New Deal, WPA-era art. But the largest set of egg tempera murals in the West sits, mostly-forgotten, in the shuttered Mother’s Building at the SF Zoo. Damaged by water, the art has disappeared from public view, and the building itself is in much need of a seismic retrofit to withstand the next major earthquake.

San Francisco resident Richard Rothman is fighting to change that. A City Guides tour guide for Coit Tower and District 1 representative for the Parks & Open Spaces Advisory Committee, he is passionate about WPA-era art. For years, he’s been working with an alphabet of city departments—including the San Francisco Recreation and Parks Department, the Arts Commission, and the San Francisco Zoological Society—to restore the Mother’s Building to its former glory. 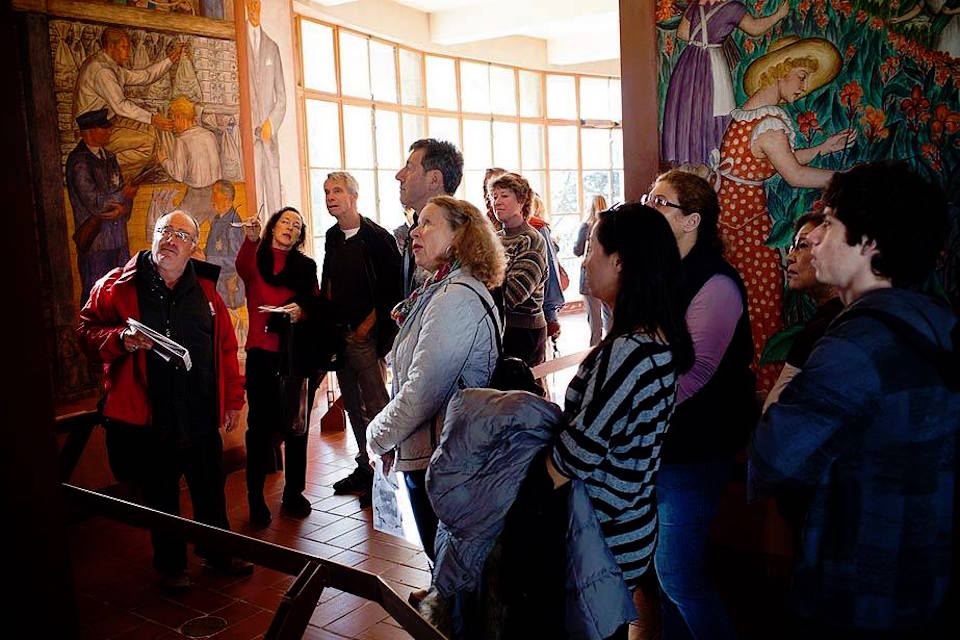 First opened in 1925, the Mother’s Building was originally part of the Fleishhacker Pool complex, then the world’s largest heated saltwater pool. It was designed by noted San Francisco architect George W. Kelham, who also worked on the rebuilding of the Palace Hotel in 1906, the Federal Reserve Bank, and the main branch of the San Francisco Public Library (now the Asian Art Museum).

Now owned by SF Recreation and Parks, the Italian Renaissance building was donated to the city by then Parks Commissioner Herbert Fleishhacker, who also donated the land that became the San Francisco Zoo. Together with his brother, Mortimer Fleishhacker, the building was meant to honor their late mother’s memory and serve as a spot to rest for mothers and small children. For practical purposes, the building also offered refreshments and medical advice. All of these features made it a rare find in San Francisco, and in fact, it was said to be one of the only such structures in the West that focused on the needs of mothers and small children in a recreational space.

The Mother’s Building saw other uses in later years. After a restoration in 1975, the building served as its gift shop between 1978 and 2002. It was closed in 2002, as the building deteriorated.

The striking murals and mosaics that grace the Mother’s Building were completed in 1938. Two San Francisco artists, Helen Forbes and Dorothy Puccinelli, painted the work from inspiration found while sketching animals at the zoo. 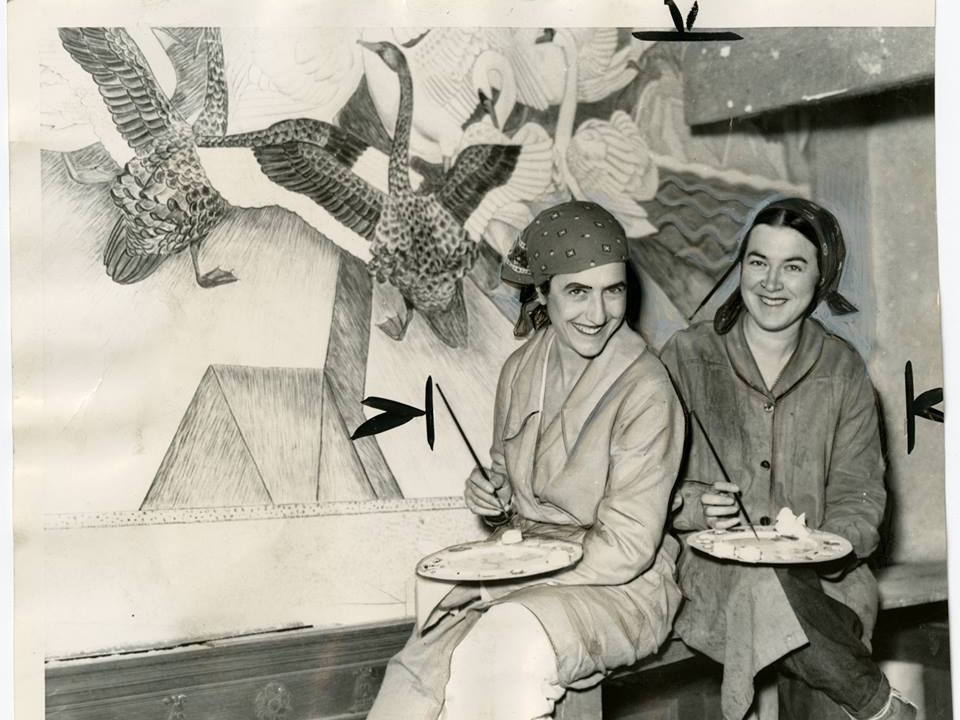 Over four and a half years, the two used egg tempera to depict scenes from the story of Noah’s Ark, after the flood, over an expanse of 1,200 feet. The theme is of renewal, which resonated with audiences facing tough times during the Depression and for the zoo itself, with its conservation mission. The artwork shows elephants, white pelicans and donkeys making their way around after the receding of flood waters, while Noah himself is surrounded by deer.

That the Mother’s Building featured two female artists from the WPA era was something that drew Rothman to support its restoration. “Most of the artists during this time were men,” he explains. “At Coit Tower, there were 23 artists, and only five were women. At the Mother’s Building, they were all done by women.”

Time—and water from the fog and sea—have taken their toll on the Mother’s Building. “The building ... is at a critical point in time. While it has retained much original fabric, significant problems such as water intrusion threaten its integrity,” wrote the Architectural Restoration Group in its assessment of the Mother’s Building. ”If conditions are left untreated, they will continue to deteriorate at an accelerated rate, resulting in costly damage—both financial and historic. If properly addressed now, repairs and upgrades can prolong the future of Mother's Building and ensure its continued use and enjoyment for generations to come.” 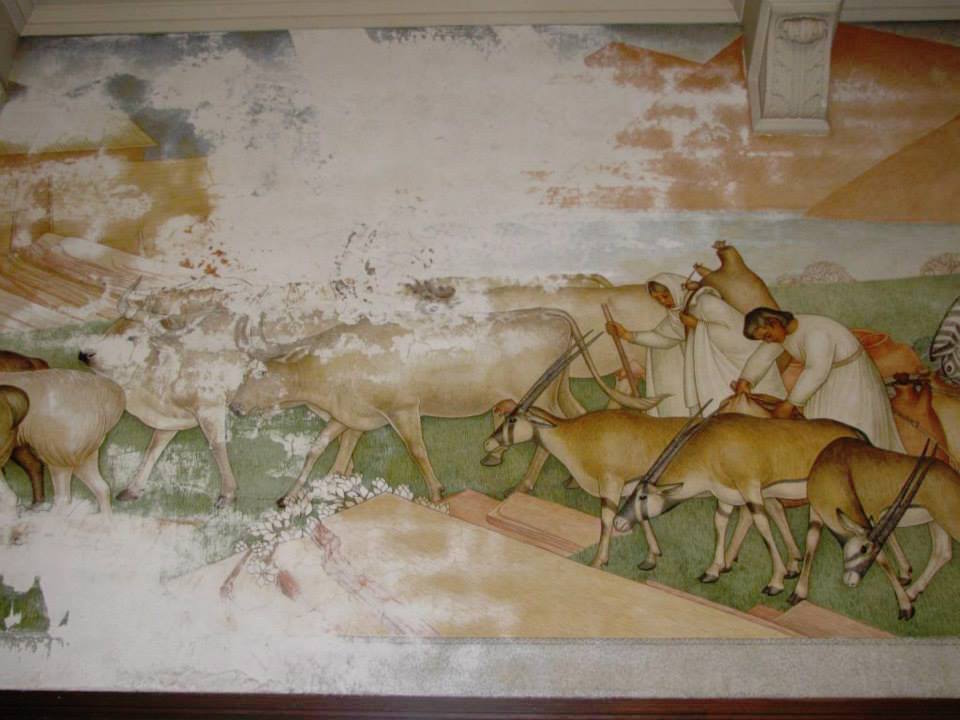 Water has damaged the murals of the west wall. (Photo: Friends of the Mother's Building)

Separate from the building itself, the murals themselves face distinct problems. “Beach Chalet, Coit Tower, the Mother’s Building—none of these buildings were designed for [art],” says Rothman. Artists themselves had to find spaces for the murals before funding ran out for the Public Works of Art Project—a period which only lasted for six months.

Because art was added on as an afterthought long after the construction of the buildings, all three of the structures have faced considerable challenges, and costs, in restoration and preservation.

In particular, the murals on the west wall of the Mother's Building have been significantly damaged by water, while the building itself faces threats from steel corrosion, cracks in the walls, and even overgrown vegetation that could damage the foundation.

But progress is being made. Rothman first found out about the Mother’s Building as a young child in San Francisco visiting the Zoo. As an adult, he heard a radio program about the need for preservation and decided to get involved.

Back in 2013, Rothman worked with the SF Recreation and Parks, San Francisco Zoological Society, the Arts Commission, and the Historic Preservation Fund Committee to fund a study that assessed the damage to the Mother’s Building. The study alone, cited above, cost over $100,000 to undertake, and will be presented to the Historic Preservation Commission this Wednesday. 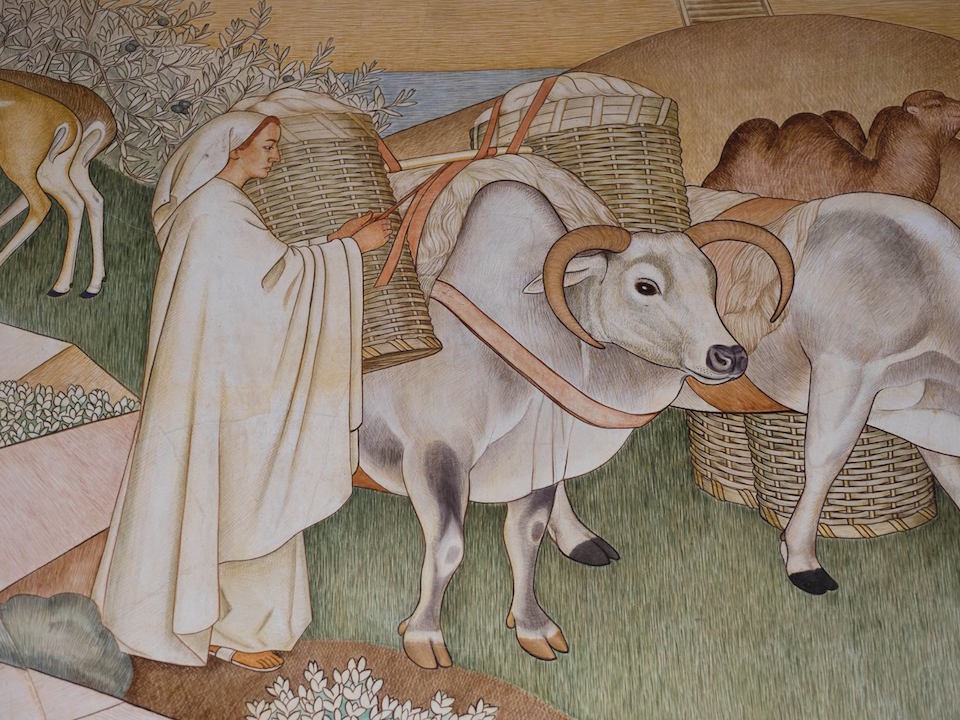 A woman and water buffalo make their way off the Ark in this detail from one of the murals. (Photo: Friends of the Mother's Building)

The restoration work and seismic refitting will likely cost $4 million, a sum that Rothman says he is “still wrapping his head around.” Despite the daunting costs, he believes that the murals and the building will one day be open to the public again. In fact, the Zoo may turn it into an educational building and hold events there once it's restored.

“I think [the murals] play an important part of our history,” he says. “They deserve to be preserved.”