Off-Leash Dogs At Ocean Beach Could Be Deadly For Endangered Birds, Experts Warn

Signs along Ocean Beach may proclaim that the beach is protected land for the threatened Western snowy plover, but many San Francisco residents are unaware of the small brown-and-white shorebird, which makes its home there and at Crissy Field in the winter months.

Protecting the federally endangered bird is one of the reasons that the National Park Service (NPS) is aiming to restrict off-leash dogs along the Golden Gate National Recreation Area (GGNRA), which includes Ocean Beach, Crissy Field, Fort Funston, and Baker Beach in San Francisco.

Surrounded by a major city, the GGNRA has 35 endangered and threatened species on its lands, more than any other national park in the continental United States. That's “more than Yosemite, Yellowstone, Sequoia, and Kings Canyon National Parks combined,” the Parks Conservancy website states.

But despite the risk to those species, the GGNRA is the only national park in the United States that allows off-leash dog walking, a status that dog lovers in San Francisco are eager to keep. 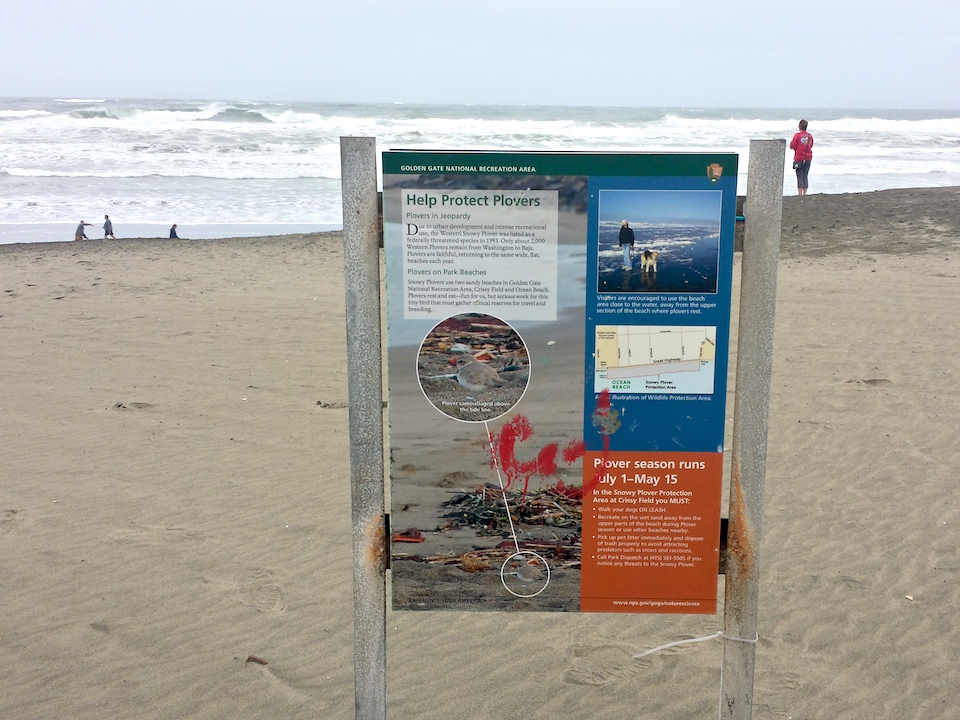 The proposed dog management rules have been controversial with many locals, with groups like Save Our Recreation springing up to maintain off-leash access for dogs. Earlier last week, the Board of Supervisors, led by District 4's Katy Tang, passed a resolution opposing the GGNRA restrictions.

Currently, dog management laws are in place from July to May, restricting off-leash dogs on Ocean Beach to a roughly 2.5 mile stretch from Stairwell 21 (near the Beach Chalet) to Sloat Boulevard. The proposed NPS regulations would ban dogs from Stairwell 21 to Fort Funston [update: not the full beach as we'd previously written].

Even as it stands now, the dog management law is rarely enforced. On any given day along Ocean Beach, beachgoers and off-leash dogs can be found roaming around the base of the sand dunes, where the snowy plover makes its home. 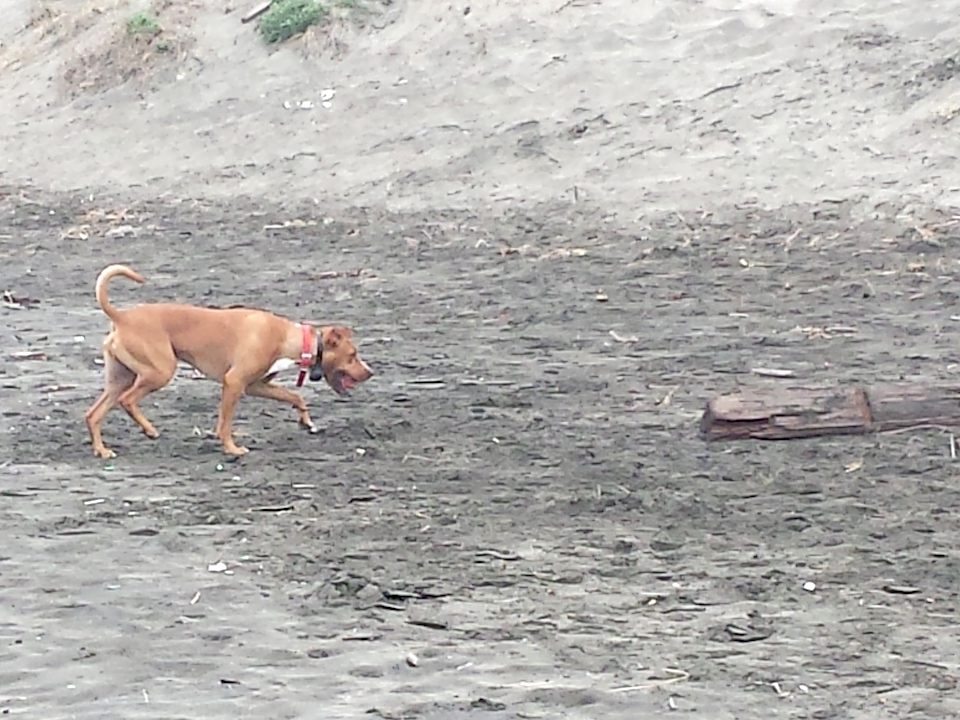 A dog wanders on a restricted area of Ocean Beach at Noriega, near an area where snowy plovers were recently seen. (Photo: Fiona Lee/Hoodline)

“We don’t get very good compliance on our leash law,” said Dr. Bill Merkle, a wildlife ecologist with the NPS. “We have monitoring data that actually shows that 60-70 percent of people are non-compliant with the leash law.”

The snowy plover also suffers from a case of mistaken identity. Sanderlings, shorebirds which look very similar to the plover, are found in much larger groups along Ocean Beach. The two types of birds can often be seen together, adding to confusion for the everyday beachgoer, who may wonder just how many snowy plovers are on the beach. 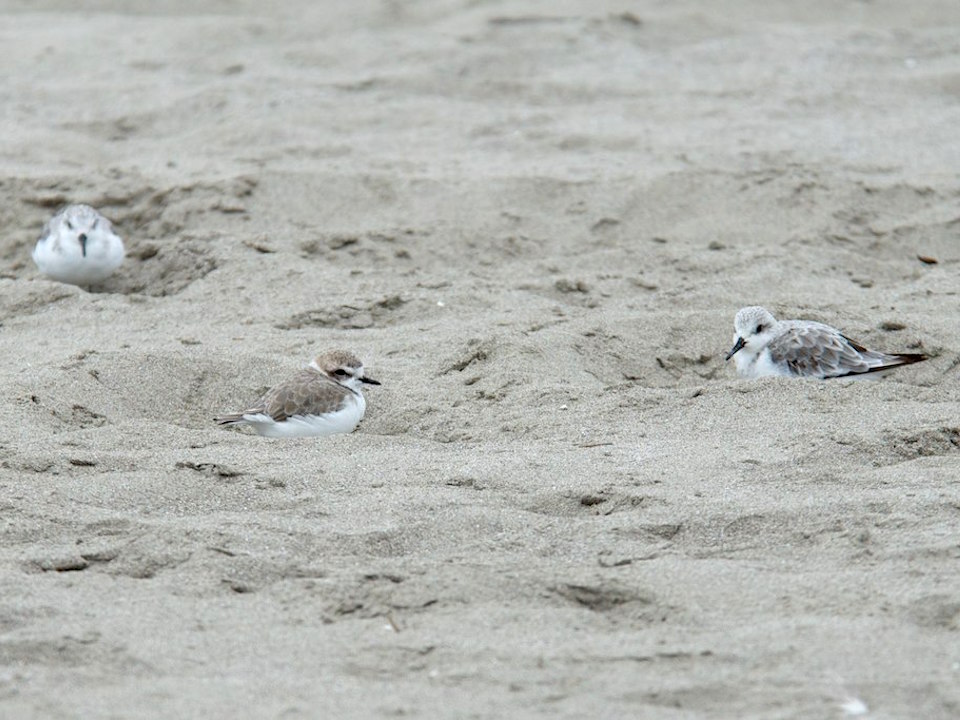 A snowy plover (center) nestles in the sand between two sanderlings. (Photo: HarmonyonPlanetEarth/Flickr)

There are only 2,100 western snowy plovers, but in January, the Parks Conservancy observed more than 100 of the birds along Ocean Beach, a “record high” for the area.

“We did get a report in Oregon a few years ago that breeding has been pretty good,” he observed. “Because of the drought, winters have been a lot milder, and we have better survivorship. That may be why we are getting more coming back here year after year.”

Although the snowy plover appears to be doing well, even with humans and dogs romping around off-leash, that doesn’t mean that they would continue to do so if San Francisco’s dog lovers succeed in blocking passage of the dog management proposals from the GGNRA.

Dan Murphy, who recently led a snowy plover walk with the Wild Equity Institute, believes the shorebird is under stress not just from dogs, but from humans and high tides as well. A Parkside resident and Golden Gate Audubon Society conservation member, he has been observing the snowy plover since 2007, and has participated in counts.

“You can tell how stressed these birds are because they like to flock,” he observed on the walk. “But on Ocean Beach, you can only see one or two here and there.”

When a dog disturbs a snowy plover—or any shorebird—it flies away. That doesn’t seem like a big deal, but for a migratory bird, it is. Repeated disturbances stress and tire out the birds, wasting needed energy for their lengthy migrations up and down the West Coast. 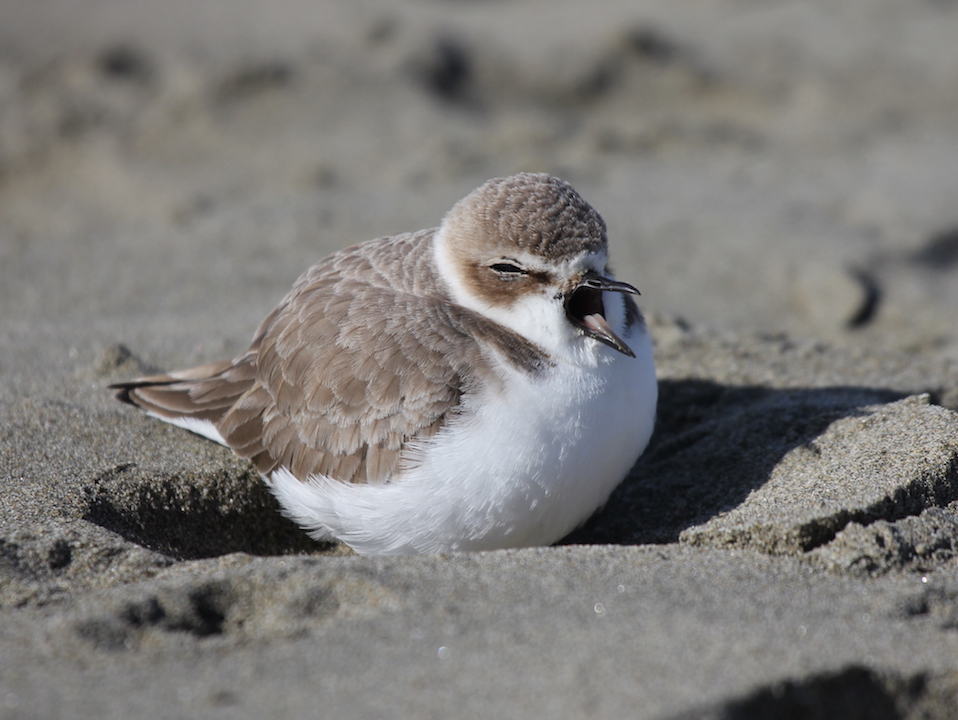 This can be an even bigger issue for shorebirds with longer migrations. For instance, the sanderling’s migration route can take it from Chile to Alaska.

“This is a really significant stretch of beach for not only for snowy plovers, but for all kinds of shorebirds: gulls, elegant terns, and sanderlings,” Murphy observed. “Sometimes we’ll have 800 sanderlings on that beach, and they are far more vulnerable to dogs than the plovers, because they are right at the water’s edge. The dogs go crazy and chase them out.”

Dr. Merkle agrees. Unlike humans, “the shorebirds and the plovers view the dog as a predator. The birds will react to a dog from a much greater distance than people.”

The wildlife ecologist also points out that the snowy plover is not the only species that could potentially benefit from a restriction on off-leash dogs.

“What we don’t want to lose is that a big part of the plan is balancing recreational opportunities for people who are seeking non-dog experiences,” he says. “We have big parts of the area where people have had encounters with dogs, [including] dog fights [and] dog bites."

Murphy also supports the National Park Service’s proposed regulations. “I’m all for it,” he says emphatically. “As nice as some dogs are, to a plover, a dog is a carnivorous monster.”

The National Park Service has extended comments on the GGNRA proposal to May 25th, 2016. To see details on upcoming public meetings and more information on the proposed dog management rules, visit their website.
San FranciscoOcean BeachOuter SunsetOuter Richmond
Aug 12, 2022