New Mission Cafe 'The Temporarium' Serves Up Coffee And Philosophy

There’s a new little spot at 22nd and Guerrero where you can go for a cup of coffee, a pastry, and a bit of thoughtful conversation with the proprietor, who just happens to be graduate student of philosophy. Yep, it’s O.G. San Francisco, just like Avery Burke himself. A fifth-generation San Franciscan, Burke wanted his coffee shop to reflect that modus operandi in the name, which is why he dubbed it The Temporarium.

“It’s a small little place, almost like a terrarium, where people are here temporarily, and then they go," he explained. "It’s a little terrarium full of temporary things."

Since he opened two months ago, Burke says the name has caused a bit of confusion, with many customers asking if he is there only temporarily. His response is philosophical: “Only as temporary as anything else!”

Though Burke was pursuing a master’s in philosophy from San Jose State University when he got the chance to open the Temporarium, he got his start in the coffee field 13 years ago, working at Barefoot Coffee Roasters in San Jose, one of the original third-wave coffee roasters in the Bay Area.

From there, Burke moved on to manage The Creamery and Contraband Coffee, an Emeryville-based roaster that sources the coffee he serves at the Temporarium. (He eventually plans to add another featured roaster as well.) “I’ve been in coffee for an embarrassingly long amount of time,” he says.

The “flicker of an idea” for opening his own shop became a reality when he found the turn-key former Sweetmue space on Craigslist. Burke, who's also a folk musician, got to work making the space his own: the bar was made by a friend who creates art installations, while Burke covered the walls with wood veneer he stained himself.

Owning his own coffee shop has been a lifelong dream for Burke. “There is always something to be surprised about in the flavor of coffee," he says. "It hits a very particular range of tastes, and there is no really good, acceptable substitute.”

But he's not giving up on his academic career, either. His long-term plan is to hire another employee, so he can lecture in philosophy at San Jose State when he's not running the coffee shop. His area of study explores what it truly means to know something, rather than just believe something. "Super nerdy stuff,” he jokes. 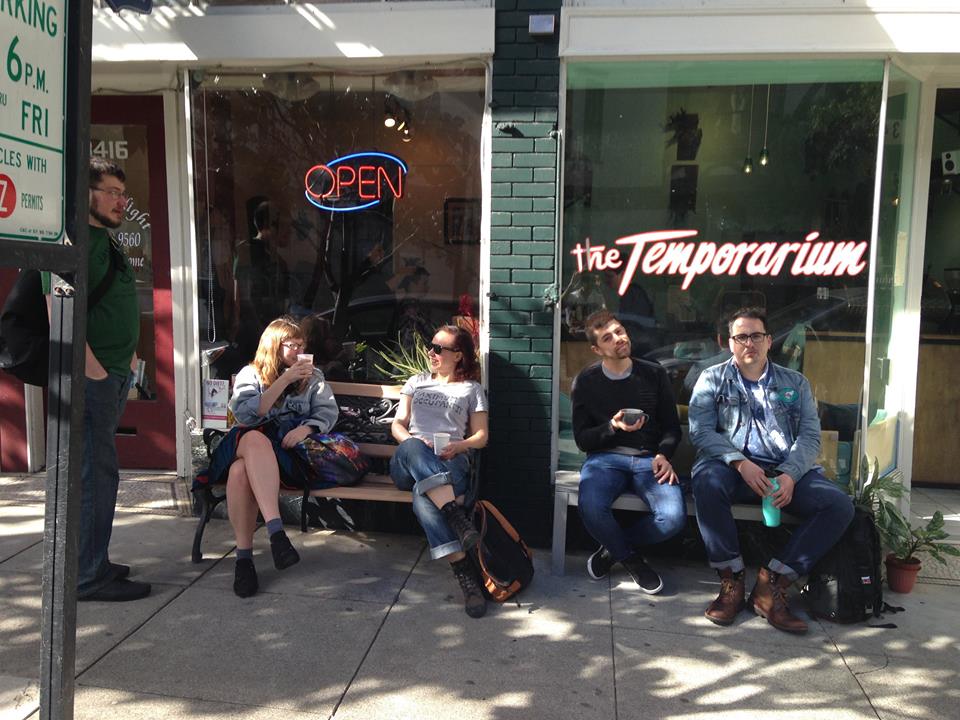 The Temporarium's selection of coffee rotates once a month; on the day we stopped by, Burke was featuring three pour-overs: Guatemalan, Ugandan, and Ethiopian. “I select coffee based on the tastiness of the bean," he says. "It’s a high-quality bean, and they roast it so you can taste the flavor of the bean, not the roastiness."

His pride and joy is his manual espresso machine, which he says is one of only a few in the Bay Area. Pull on one of the large levers at the top of the machine, and it forces down a column of water that slowly saturates the espresso, giving it a sweeter taste. The tradeoff is that the machine is less forgiving for the barista. "An automatic machine is kind of like driving an automatic car," he explains. “There’s a smaller margin of error if your grind isn't right or your tamping isn't right, and it shows up in the shot."

Going on automatic isn't something that comes naturally to Burke, as he juggles his driving passions of coffee, music, and philosophy. But like any good philosopher, he can express how they all relate.

“Your livelihood is part of your self-expression. A musician or creative person is putting themselves out into the world. Philosophers do a similar thing ... Owning a shop is like that. You see something that you want, and you forge a path out of nothing. That is the connection: They’re all relentlessly after something.”

Thanks to tipsters Sasha L. and Sophia.

San FranciscoMission
About 2 hours ago