Two Jack's: The Best Restaurant You've Probably Never Been To

For Nikki Cooper, it's all about positivity.

Her restaurant, Two Jack's, sits on the corner of Haight and Webster, which is about as far eastward as businesses get in this neighborhood.

As such, Two Jack's doesn't get the foot traffic that more centrally-located Haight Street eateries enjoy. And it's at an intersection that, while safer than it used to be, still grapples with issues of drugs and crime -- an atmosphere that doesn't exactly attract new diners.

But Nikki is undaunted. With Two Jack's, she's determined to transcend the troubles of the neighborhood by creating a place where folks of all races, backgrounds, and lifestyles can come in, enjoy some comfort food, and stay for a while. She's also striving to set a positive example for local African American youths, showing them that with hard work and the support of family and neighbors, a better life is possible. 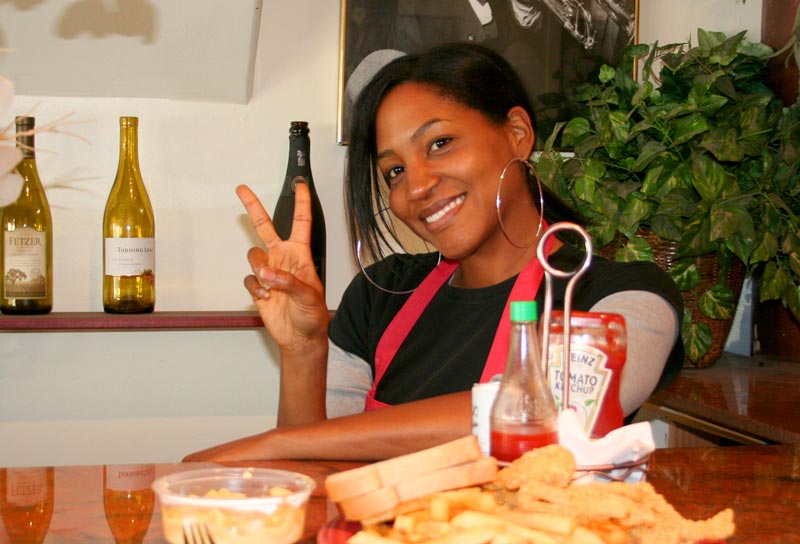 Nikki's parents Stephen and Almeta first opened Two Jack's way back in 1977. They already owned a liquor store across the street called Two Jack's, and decided to carry the name over to the restaurant. (The curious apostrophe placement, however, remains a mystery!) 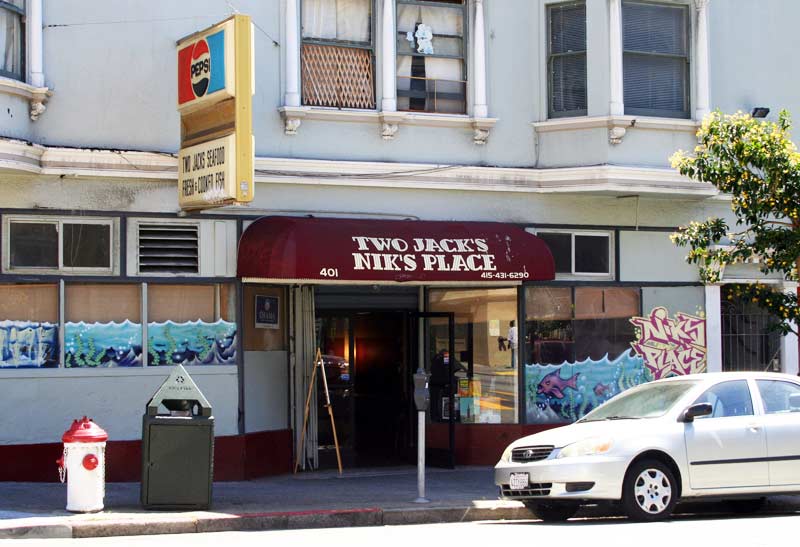 As a child, Nikki would spend afternoons at the restaurant, watching her parents as they worked and learning the ropes of the food industry. But she never expected to make it her career.

Instead, after high school she attended UC Davis, then worked as an afterschool coordinator for the San Francisco Unified School District and at an educational non-profit called Making Waves, before finally enrolling in a Masters program at SF State. She also got married -- her husband is an engineer -- and had a daughter.

But she couldn't shake the entrepreneurial bug that her parents had passed onto her.

"At some point I realized I wasn't going to be happy working for someone else," she says.At the same time (around 2006), Nikki's father was preparing to close Two Jack's. He had already opened two other locations in the city, and the Haight Street location, which was take-out only at the time, wasn't a financial success.

So, her father asked Nikki if she'd like to take it over. The timing was right. He offered to lease the restaurant to her, but Nikki refused. Instead, she insisted on buying it outright.

It was a big step, and Nikki knew it would be a lot of work, but she was confident that she was ready for the challenge.

Then, on the day she signed the contract to buy Two Jack's, she discovered that she was pregnant with her 2nd child.

And then her manager broke her arm. And her husband was busy working on a project for the Port of Oakland. So, Nikki was effectively left alone to turn the space, which she describes as "industrial" and "in shambles," into the comfortable neighborhood restaurant that she envisioned. And she had to do this with a young child at home and another one on the way.

Nikki didn't complain. She got to work. 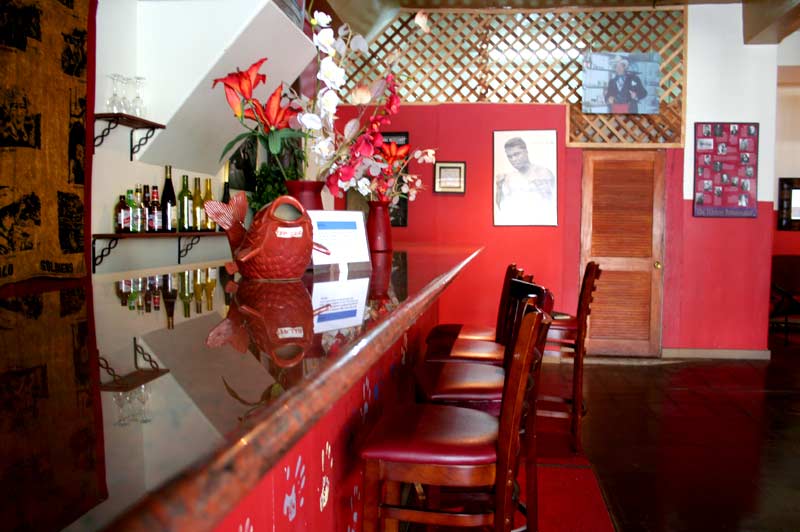 The remodeling was extensive. She added plenty of touches like flowers, warm lighting, and artwork to replace the industrial vibe with a homier, inviting atmosphere. 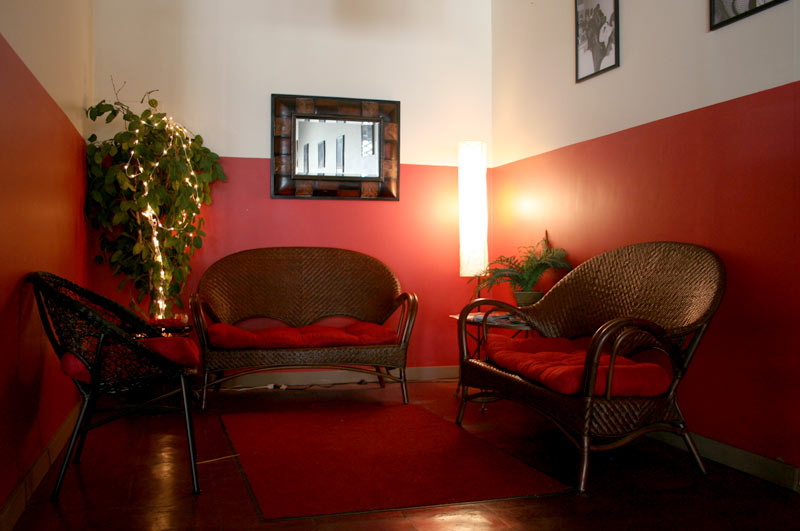 She tore out a deep freezer that once occupied a space in the back of the restaurant, and replaced it with comfortable seating and magazines.

"Not a lot of African American businesses have seating areas," she says. It's exactly this climate of distrust that she wants to break with Two Jacks, and the lounge area is her way of letting patrons know that they are appreciated -- and welcome to linger. 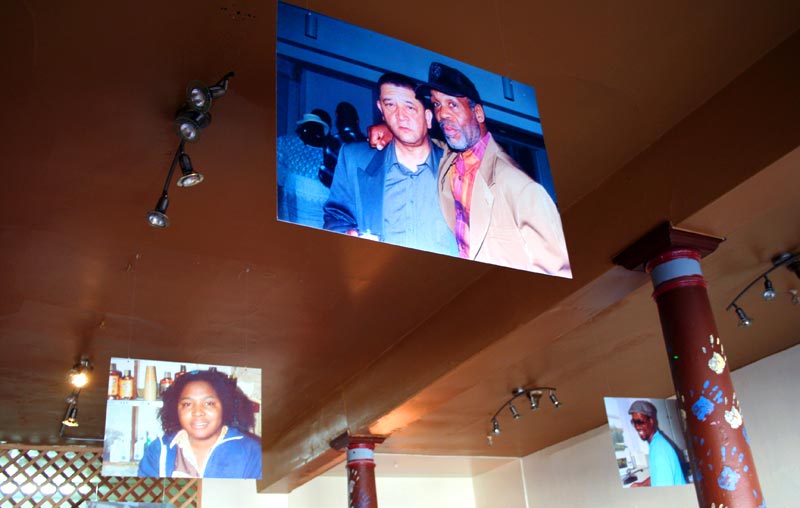 Nikki also filled the space with personal elements. Dozens of family photos adorn the walls and hang from the ceiling. Pictured above are photos of Nikki's mom (bottom left), and her father with his friend Danny Glover (top). Her family has deep ties to San Francisco and to this neighborhood, and honoring that history was clearly a priority for Nikki. 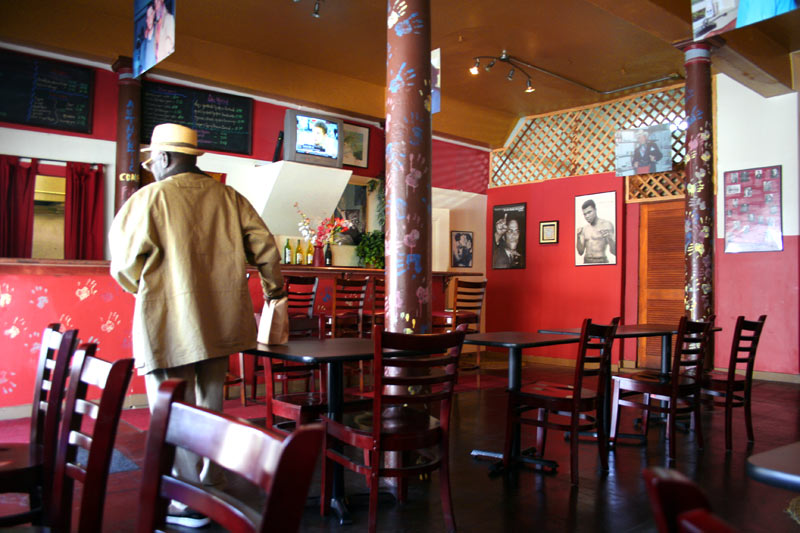 Finally, what was once a take-out joint is now a sit-down, stay-a-while restaurant (though you can take out too if you're in a hurry, of course).

Speaking of which, let's talk about the food, shall we?

There's plenty of seafood, for one thing. Catfish, oysters, prawns, snapper, sole... So many options. We tried the fried catfish filet with fries and some mac and cheese. It was insane. Many items are based on old family recipes, and pretty much everything is homemade.

There are also burgers, chicken sandwiches, and wings, and southern staples like greens and peach cobbler.

If all that sounds a little heavy to you, fear not. Mindful that times have changed, Nikki has added healthier options like salads and grilled items to the menu.

And did we mention the prices? $6 for a double cheeseburger with fries? $2.50 for a beer? You'd be hard-pressed to find better bang for your buck in the Lower Haight, that's for sure.

With the new menu and the remodeling done, Nikki is finally able to relax — a little. While business is good, it could always be better. She recently created a Facebook page for the restaurant, and is trying to reach out to new customers.

So if you're hankering for some good food and haven't tried Two Jack's yet, get yourself on over to Haight and Webster ASAP. Meet Nikki and try the catfish. You'll be happy you did both.