If you think of natural water formations flowing along the contours of the land, it's not a stretch to picture San Francisco as a land of streams, ponds, and lakes. But with streets paved over and waterways diverted to culverts and storm drains, the natural landscape of the city's land can be hard to discern.

One such channel that's not so obvious today is a stream that once started right near Duboce Park. If you've ever stopped by the Safeway parking lot and noticed the signs for "Reservoir Street," you already have a hint.

Reservoir Street connects Market Street, immediately across from the Whole Foods, with Church Street, where it passes the St. Francis Lutheran Church (aka, “Our Lady of Safeway”). The street seems like nothing more than the driveway access to Safeway's parking lot to the casual eye, but it is in fact a real street. So, what's behind the street's name? 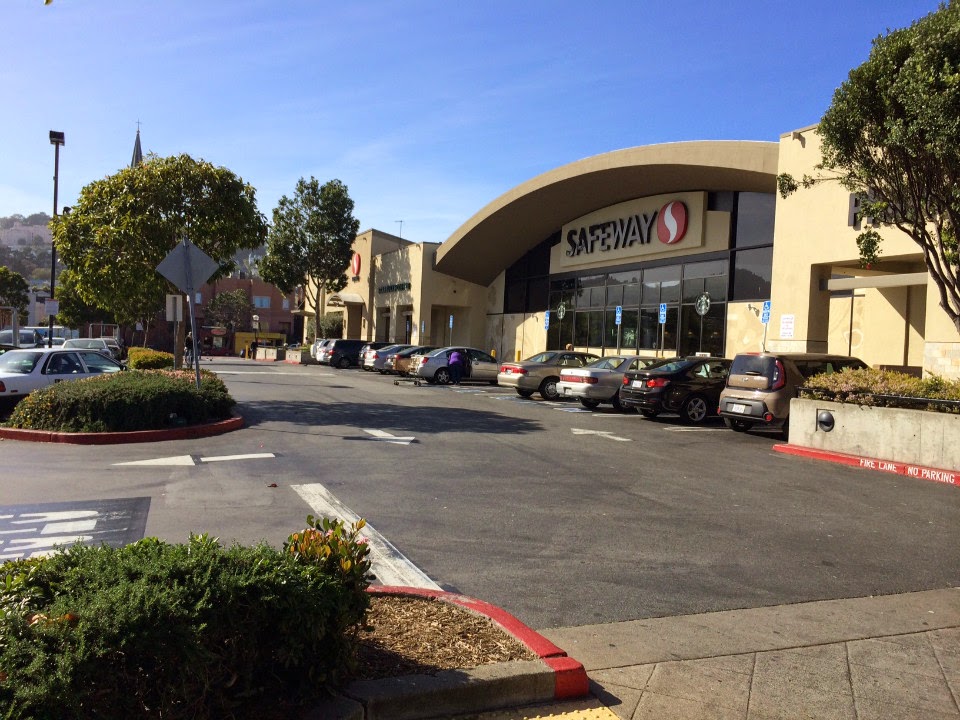 A few of the streets in the area have had name changes over the years (Duboce was previously Ridley, and was even 13th before that), and there doesn't appear to be a definitive history for the street's name. Instead, we have to look to the historical neighborhood to glean how this street got its name.

It's common that when quarries fall into disuse they will tend to fill with rainwater. If you notice that the hill on which the U.S. Mint sits, perched on cliffs above Safeway, it seems reasonable to extrapolate that perhaps a quarry had once been on the site and that the resulting pooling of water could be the reason for the name.

However, there's no historical record of a quarry on that site. In fact, the hillside had been blasted away in the late 1800s for the sake of extending Market Street as the city grew. Some longtime SF residents have shared first-hand accounts of the parking lot there actually being a huge basin filled with water in the 1950s, but in historical photographs there are very clearly buildings on the lot's location in the 1940s, and Safeway itself existed in its current location in the 1960s. 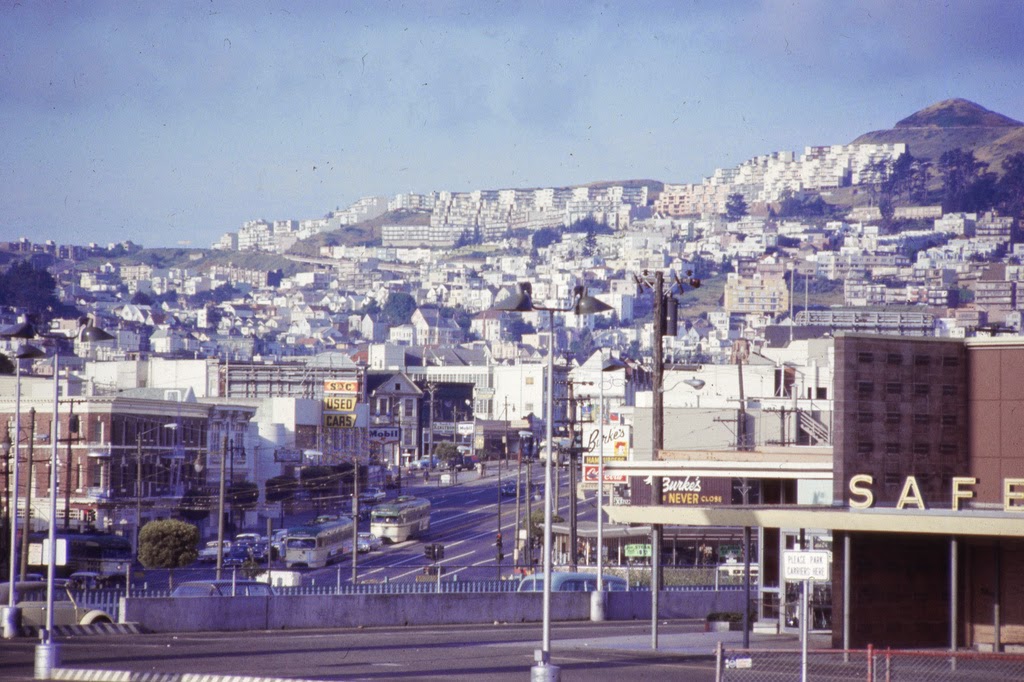 This big basin of water, then, was clearly the result of building demolition and the natural water flow along that part of the city's landscape. The SF Public Library photo archives have a photo and news clip showing, in 1951, the “four-foot-deep rainwater lake being drained by gasoline-powered pumps,” with the Mint looming overhead in the background. The newscopy of the day reads:

"Heavy-duty gasoline pump drains the last of a half million gallons of water from a potential drowning hole on a large vacant lot at Market St. and Duboce Ave. Strangely enough, the water was pumped for three days from the four-foot deep 'lake' into the sewer on Reservoir St. Mr. Fixit of The San Francisco News brought the dangerous situation to the attention of the Owl-Rexall Drug Co., owners of a 50-year lease on the property, after children began boating on the rainwater lake. The gray stone pit, formerly the site of the Farmers Market, is accessible to children as it is only partially fenced in. The company plans to fix the fence, too." That still doesn't explain the Reservoir Street name, though. In fact, the article mentions that the lake “took three days to empty into the Reservoir Street sewers,” so obviously the name (and street itself) preexisted the vacant lots. In fact, one 1865 photo in the library's collection shows the view “looking east from Reservoir Hill,” and the view is taken from the vantage point of what we call Mint Hill today.

Further research in the SF PUC and Water District maps shows a natural spring just a few paces uphill, roughly across the street from the fire station on Sanchez near Duboce. The spring fed a stream that meandered down an arroyo between 14th and 15th streets before eventually joining in with another fork to form Mission Creek, and ultimately spilling into Mission Bay (back when it was actually a bay). The creek still flows under the streets today, and can even be visited where it flows openly in the basement of the Armory, and meets the bay at McCovey Cove below the ballpark. 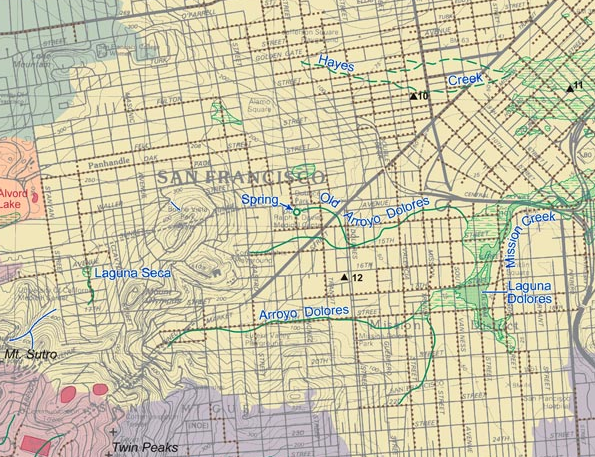 A view of the local watershed as it existed before the city, via the Oakland Museum of California.

The reservoir itself, however, goes back even further than that 1865 photo. Before the Gold Rush, the Mission Dolores overlooked a large lake or lagoon. Some maps label it as Laguna de Manantial, or lagoon fed from a spring. The lagoon was more commonly called Lake Dolores, and, being a lagoon, it was typically too salty to be used as drinking water.

Two main streams flowed into the lagoon. Arroyo de los Dolores started up in the hills, and various springs fed into the stream as it picked up volume and flowed almost in a straight line down today's current 18th Street. The grassy landscape along the stream was great for grazing, and the stream was the watering hole for the cattle and livestock that supported the Mission grounds.

The other creek, which flowed along 14th Street from today's Duboce Triangle, was used for human drinking water and for irrigating the farmland within the Mission's land. The land along the lower portion of the stream was marshy and difficult to traverse, so the missionaries had built this little reservoir upstream. By reshaping the dunes, a small kidney-shaped reservoir was formed, held in place in part by the contours of Reservoir Hill, and the path across the hill roughly followed what has today been labeled Reservoir Street.

In the years immediately after the 1865 photo was taken, the city began its earnest expansion past Van Ness. Reservoir Hill was blasted away for a Market Street pass, the water was diverted, and the reservoir became a memory. 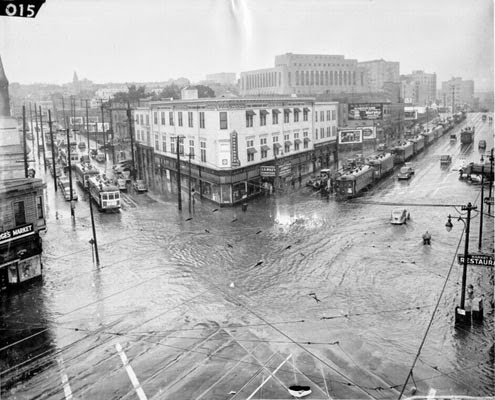 During heavy rains, however, the intersection of Market/Church/14th was (and remains) a common spot for localized flooding. As seen in the 1944 photo above, the storm drains that already carry the stream can be further overwhelmed by runoff during rainstorms.

It's a telling sign of the neighborhood's past, and reveals a hidden truth about the name of Reservoir Street, which is still with us today.