The collision of eclectic architectural styles at the corner of Polk and California streets was a major concern for the Planning Commission this week, as it debated whether to approve a modern mixed-use development for the southeast corner of the intersection, where Out of The Closet and a surface parking lot currently stand.

After a brief discussion of design concerns and alternatives, the Planning Commission ultimately voted 5-1 in favor of approving developer Presidio Bay Ventures' redevelopment plans for 1567 California St. However, the approval came with the condition that the developer continue working with Planning staff and community groups to refine the design, blending it more into the context of the neighborhood.

Ahead of the vote, Presidio Bay principal Cyrus Sanandaji explained that plans for this “severely underutilized” lot have evolved considerably over the past three years, as the company engaged with the community.

While the developer originally proposed fewer units that averaged 1,110 square feet in size, the neighborhood's feedback was that more units would be preferable in the face of the current housing crisis. As a result, unit size was decreased to an average of 900 square feet. The current unit mix is three studios, 36 one-bedrooms, 15 two-bedrooms and nine three-bedrooms.

Another last-minute change that was well-received by public commenters: Presidio Bay now plans to locate all eight of its required affordable units (based on the city's 12 percent regulation) in the building, rather than locating two onsite and paying the city a fee to cover the rest.  All eight affordable units will be located onsite, which has always been the plan, Sanandaji says, despite an error in the report sent to the commission ahead of the hearing stating otherwise.

Sanandaji also assured the commission that the shift in residential plans will not reduce the amount of retail space the building will offer. The 8,000 square feet of retail will be broken into several retail spaces, wrapping around Polk and California. 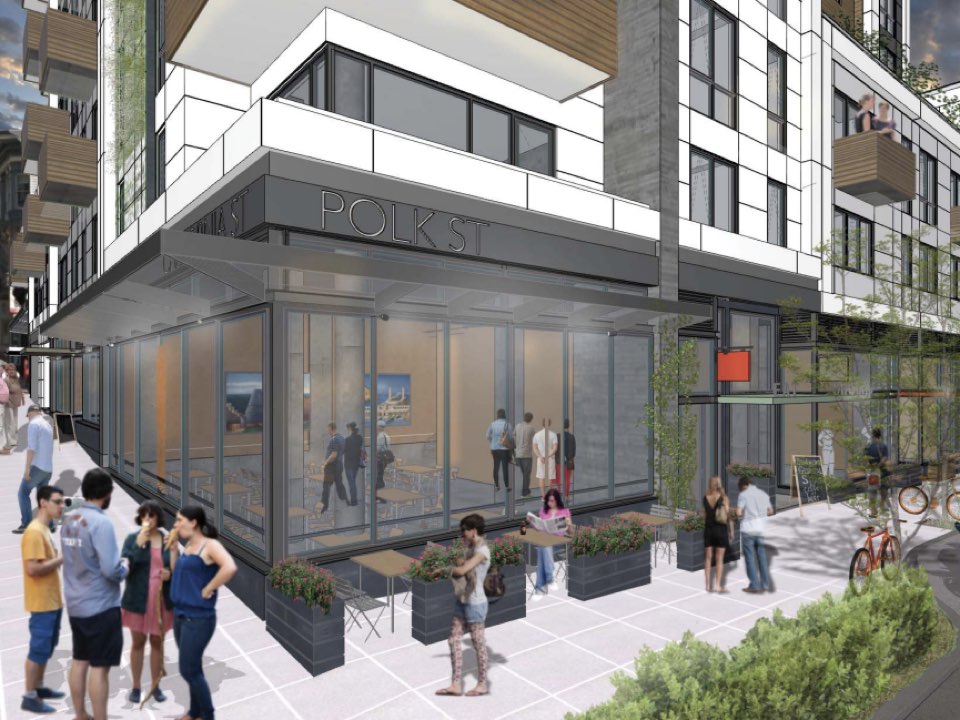 While reaction to the project was positive overall, the existing architectural character of the neighborhood—and the new development's role—was a concern. One 18-year resident of the neighborhood shared photographs of the “cacophony" of architectural styles on this corner, including the historic Royal Theater (which has since been converted into housing), the Greek Revival building at 1500 Polk that houses Chase bank, and the "concrete mini mall" on Polk across from Out of The Closet.

He then requested that the developer replace the proposed building's private balconies with bay windows, arguing that they're destined to become extra storage closets, rather than private retreats. To prove his point, he shared photos of similar developments in the area where residents are already doing this, due to the small square footage of their spaces and the balcony noise from dense vehicular traffic.

He believes the developer should request a variance, permitting less private open space onsite. (The building is planned to provide 4,959 square feet of open space through common decks on the roof and the fifth floor, in addition to the private balconies, satisfying Planning Code.) 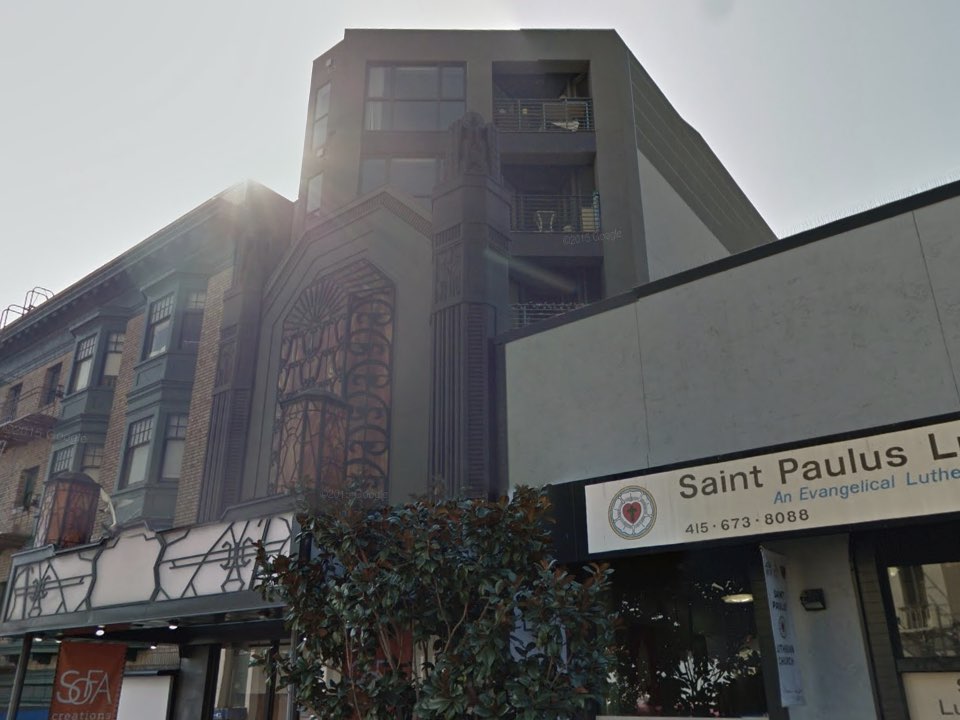 Balconies at the Royal Theater, which one neighbor argues are being used as storage closets, not private open space retreats. (Photo: Google Maps)

Commissioner Kathrin Moore, who said she lives steps from the property and walks by every day, agreed that the existing architecture at the corner of Polk and California is "exceptionally bad." While this development underscores that something needs to be done, it's also an opportunity to subtly lead the way for future developments at the intersection, she said.

Moore's suggestions for design changes included keeping the balconies on Polk Street, but not wrapping them around on California. Given the different characters of Polk and California streets, she wanted to see more variation on the design of each facade.

She also questioned whether a living wall on Polk is the right solution, noting that there's only one living wall in the city—located at Drew School in Lower Pacific Heights—that's been done well, and that most have proven to be maintenance nightmares. 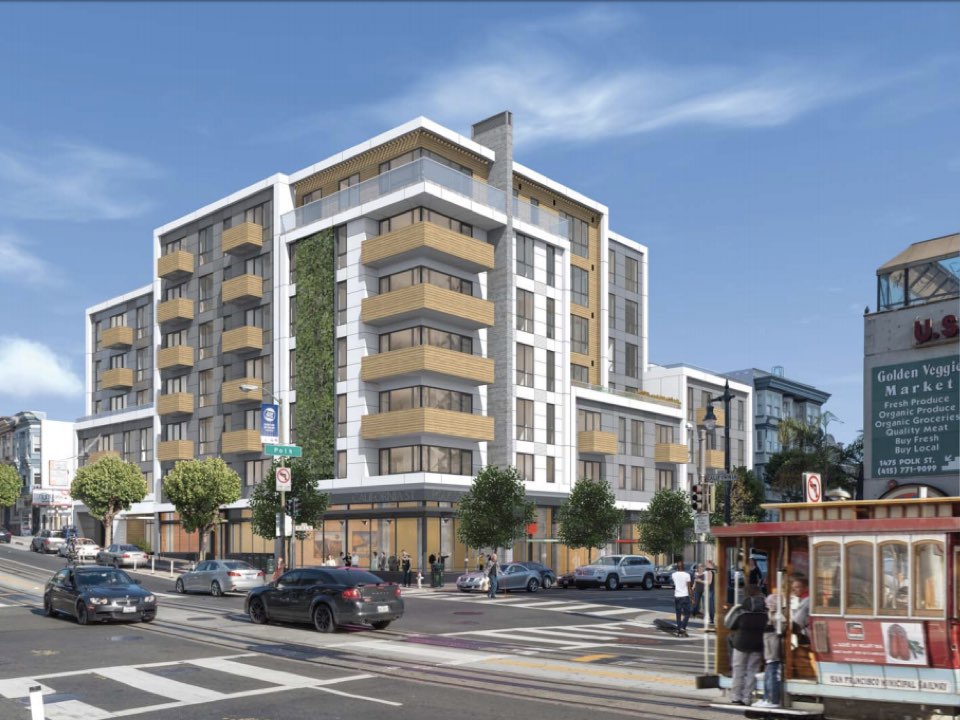 Despite these concerns, public comment surrounding the development was primarily positive. Representatives of Middle Polk Neighbors, Lower Polk Neighbors, the San Francisco Housing Action Coalition and two local labor unions praised the developer on how the design steps down as it meets neighboring buildings, its community outreach, its placement of all affordable units on-site and its use of 100 percent union labor.

A specific timeline for demolition and how this development will affect the two retailers currently operating on the property, Out of The Closet and Fashion Exchange, was not discussed. We'll share details on their plans, and how the design is refined, as construction nears.

San FranciscoPolkRussian Hill
About 8 hours ago