The Bay Area Tigray Community is hosting a virtual event this afternoon to raise awareness of the ongoing conflict and humanitarian crisis in Ethiopia.

The Tigray Teach-In is co-sponsored by Supervisor Dean Preston, who joined the organization to issue a resolution yesterday condemning ongoing human rights violations in the northern Ethiopian region that borders Eritrea and Sudan. The Bay Area’s Tigray community has gathered to create a support network across the Bay since the 1980s, Bay Area Tigray Community representative Henock told us. Note: throughout this article we will only use first names from the Bay Area Tigray Community network to ensure their families' safety. 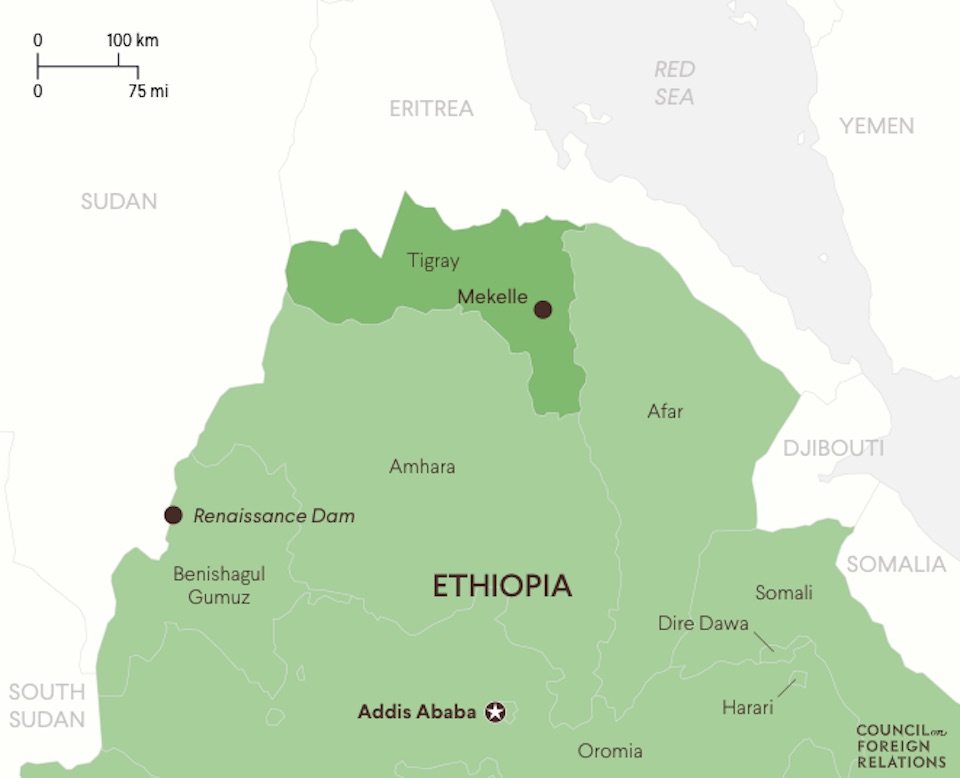 Map of the Tigray Region via the Council on Foreign Relations

“Back then, the broader Ethiopian and Eritrean communities bonded together because there were so few people,” Woldu said. But as more immigrants moved into the region, the political and cultural bonds that exist in their homeland were more evident even in the diaspora. The 1997 war between Ethiopia and Eritrea further separated some of the immigrant communities, Henock said. He came to the area in 2000 and since then different regional groups have been pushed a little further apart as each group grew larger. There are more than 80 different indigenous languages in Ethiopia, which “makes it much harder to communicate with others that don’t speak your language,” Henock said.

The Tigray community started congregating for barbecues to introduce their kids, and for family and national celebrations including weddings, birthdays, baptisms, and Tigray holidays. Starting in April 2018, the community knew that trouble was brewing in Tigray, Henock said.

The conflict is related to a shift in national power away from the Tigrayan People’s Liberation Front (TPLF) following the 2018 election of Prime Minister Abiy Ahmend, of the Oromo Democratic Party.

Ahmend entered a peace treaty with Eritrea "seemingly out of nowhere," Henock said. “We knew then something was going to happen.”

Tigrayans, which make up about 6% of Ethiopia’s population, declined to join the new government and decided to hold their own regional elections in September 2020, even after national elections were postponed in response to the COVID-19 crisis. On November 4, 2020, a major civil war broke out, reportedly against the Tigray regional government for its refusal to cooperate with the new regime.

According to the World Food Programme, 2.5 to 3 million people need emergency food assistance in the Tigray region. Representatives of international media and humanitarian aide organizations were withdrawn from the region after bombing and military fighting began, and have struggled to regain access to Tigray. Militia from neighboring Eritrea have been accused of sexually assaulting residents, destroying property, and looting from Tigray businesses and homes.

“It’s not against the regional government,” Henock said. “It’s against the whole region.” Since then Tigray has seen growing ethnic violence, with political leaders being arrested and detained for alleged events that occurred many years ago.

Since then, the youth of the Bay Area Tigray Community has started organizing in earnest. On February 4, they held a protest in San Francisco and one of them, Giday, contacted Preston’s office to invite him to speak.

District 5, which Preston represents, is home to a large population of Ethiopian residents and many of the city’s best-known Ethiopian businesses, including Axum Cafe, Club Waziema, Bruno’s, and Fillmore Street Cafe. Preston’s staff engaged in the February 4 event and that sparked a new relationship and led to the resolution adopted yesterday and the collaboration on this afternoon’s event, Woldu said.

“Our large and vibrant San Francisco Ethiopian community has family suffering back home and it's time to shed some light on it,” Preston chief of staff Jen Snyder said. She has partnered with a large group of largely young organizers to develop today’s teach-in to highlight the ongoing humanitarian crisis.

Today, I joined with the Bay Area Tigray Community to introduce a resolution condemning human rights violations against the people of Tigray and urging Congressional action. Join our teach-in Thursday 2pm to learn more and get involved. pic.twitter.com/iH3pvQGlHC

“It’s all been the young folks,” Henock added. “It’s been a few individuals taking lots of time just within the last couple of weeks.”

“We aim to be a voice for people who don’t have a voice in this moment,” Woldu said. “It’s about us trying to reach our family members and working to achieve a cease-fire as soon as possible.” Henock and Giday will be joined by other Bay Area Tigray Community members, Remhai and Kiros, along with Preston during today’s teach-in, which is intended to inform, and provide information about what people are experiencing in Tigray from those that have lived through it, and have families affected by it.

You can register for the Zoom event in advance here.