New in the Neighborhood: Rickybobby

By Andrew Dudley - Published on December 11, 2012.
San FranciscoLower Haight
Say hello to the newest addition to the Lower Haight: Rickybobby, which opens at 5:30pm tomorrow at the corner of Haight and Webster.

The Backstory
Rickybobby is the brainchild of chefs James Moisey and Shane LaValley, most recently the team behind the menu at Excelsior's Broken Record. When the duo's lease was up earlier this year, they opted not to renew, and instead decided the timing was right to start a restaurant of their own. They took Broken Record's entire kitchen staff with them. James and Shane considered other locations, including one at 6th and Minna, before finding the space at 400 Haight Street. They were particularly impressed with the site's landlord, Mark Rutherford, and felt that Rickybobby could fill a void in the neighborhood's existing culinary landscape. James was also a long-time fan of the Lower Haight, having made countless pilgrimages to Toronado all the way from Berkeley when he was a student there. So, the location seemed like a great choice.
The Space
Over the past two months or so, they've transformed the former Rotee space. Filament bulbs hang from the ceiling, and the walls are now dark green, adorned with enlarged travel photographs taken by James's brother Andrew. The space has roughly half the dining capacity of Broken Record (44 patrons versus about 95), and as such, James and Shane have chosen to replace Rotee's small tables with large, communal-style versions. That means when you dine at Rickybobby, you may find yourself sitting next to, or across from, a stranger. It's a detail that James and Shane hope diners will appreciate (or at least not dislike). Unlike at Broken Record, you won't order at the counter. Instead, a pair of servers will work the room, taking orders and delivering dishes. Like at Broken Record, though, you'll select your items from a large blackboard menu that hangs above the kitchen. (And above that menu hang the heads of a two-headed cow, lest you start taking yourself or your meal too seriously.) 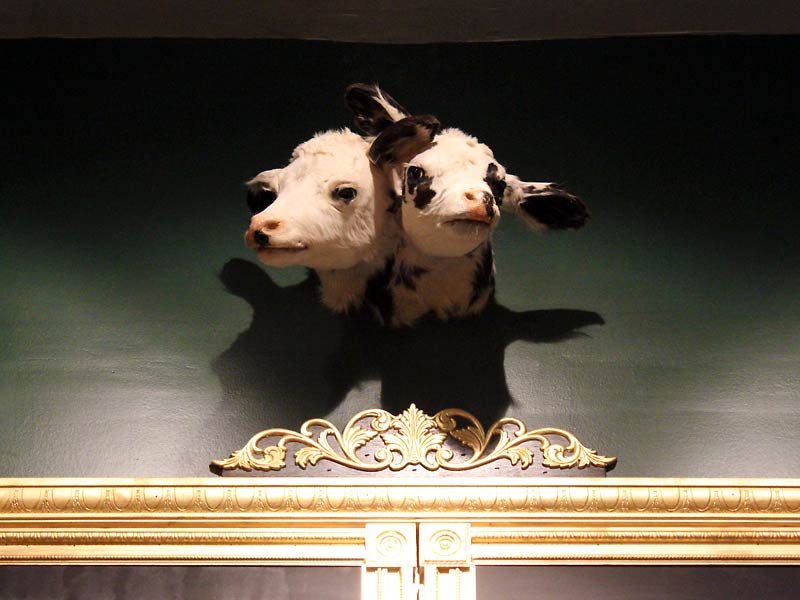 The Menu
If you're familiar with the menu at Broken Record, you're familiar with the menu at Rickybobby. They've brought many of the most popular items with them, like the bacon burger (with bacon and beef ground together in the patty), lobster mac and cheese, and the pulled pork sandwich. They'll also have a few salad and soup options, chicken drumsticks, fries, and desserts. In addition to the regular options, they expect to have 3 or 4 specials that will change every couple of weeks. And here's a unique section on their menu: Baller's Corner. Once or twice a week, they'll offer one "fine dining" menu item, like a ribeye steak. The portions will be smaller than you might find at your favorite fancy restaurant, so you can enjoy your baller ribeye at a non-baller price. The beer and wine license for Rickybobby should arrive within the next two weeks, which means at launch they'll just have a selection of sodas and iced tea. But when things are up and running, expect 4 beers (mostly local, like Anchor and Speakeasy) and two wines on tap. Yes, wines on tap -- one red and one white. There will also be wines available by the bottle, if that's your thing.
The Name
Finally, the name. When trying to think of a name, they went through lots of ideas, but everything seemed too "cutesy," or didn't register well with their friends and family. Then one day, during one of their brainstorming sessions at Broken Record, the bar was projecting the movie Talladega Nights: The Ballad of Ricky Bobby. Shane was inspired, and announced that Rickybobby would be the name. It's all-American, it has two guys' names in it, which seemed appropriate for the venture, and it's playful. As James put it, "Instead of giving the restaurant a name, we gave it a nickname." They tested it on some friends, whose immediate response was to laugh -- a better reaction than any of the runners-up had garnered. And they spoke to a lawyer, who indicated that as long as they didn't make the restaurant NASCAR-themed, or use the movie's full title, they would probably be safe from any legal issues. And thus, Rickybobby was born.
The Launch
Starting Wednesday, Rickybobby will be open 7 days a week from 5:30pm to some time around midnight -- the exact hours aren't finalized yet. They're still waiting to receive their sign (a giant pig with American flags on its eyes, which sounds worth the wait), and a few stools, and of course the beer and wine license -- but all of that should be arriving in the next few weeks. For now, they're just hoping that customers will be patient as they iron out the opening kinks and get things up and running. More than anything, James and Shane seem thrilled to get back in the kitchen after spending two months building out the restaurant. Cooking is clearly what they love to do. And having met dozens of locals who have poked their heads in over the past few weeks, they're more than excited about doing business in the Lower Haight. So, that's Rickybobby. Head on down to 400 Haight Street later this week and welcome these newest Lower Haighters to the 'hood. And if you get a chance to dine there, let us know what you think!
San FranciscoLower Haight
About 16 hours ago