A couple days ago we wrote about the etymology of our neighborhood’s street names, prompting some interesting discussion amongst readers. Unbeknownst to us (thanks Eli for the tip!) Divisadero was not always called Divisadero. Up until 1909, Divisadero Street used to be Devisadero Street.

If that spelling gives you the same shudder we get seeing someone spell Dolores Park or Street "Delores," then you're not alone. San Francisco is big on spelling things a certain way, even if they make little phonetic sense (like Gough). So how did the Devisadero street name change even happen?

According to the SFMTA, prior to 1909 there was no formal planning for San Francisco's street names. Duplicates were rampant, and the US Postal Service estimated that they mishandled around 500 letters per day. Mayor Edward Taylor eventually put together a commission to remove duplicate street names and correct those that were misspelled. At the time there were four Church Streets and three sets of numbered streets—one set in the Sunset, one in the Mission, and one in Bayview. Street names would also change block by block, despite being continuous (Castro and Divisadero, anyone?). If you're as geeky about SF history as we are, check out this sweet article on the "farcical comic opera" that was the renaming of San Francisco Streets.

Divisadero, as we've mentioned before,  appears to have come from the Spanish word "divisar", reflecting its former position as a boundary between the Presidio and the rest of the city of San Francisco. According to one popular theory, someone misspelled the word once as “Devisadero” and it stuck, until the street naming commission caught the supposed mistake and remedied it.

The fix was not without its fair share of drama. The residents of the neighborhood rose up in arms at the changes, particularly those who had businesses whose names and cards would need to be altered. A November 1910 edition of the SF Chronicle stated that the residents:

"Are not wedded to inaccuracy, but they say that as they have gotten along so many years with an e in the first syllable, they can see no reason why it should now be changed to an i. They point to a lot of corruptions of French names which have been endured by Londoners for many years, and think that if the Britons can endure "Marylebone", San Francisco ought to be able to put up with Devisadero, even if it is an improper spelling of a Spanish word."

The city denied the neighborhood's request and moved forward with the name change. There was no budget set aside to change street signs or any other incorrectly spelled markers. Therefore Devisadero remained allegedly misspelled on the streets, though residents were required to change their mailing addresses. 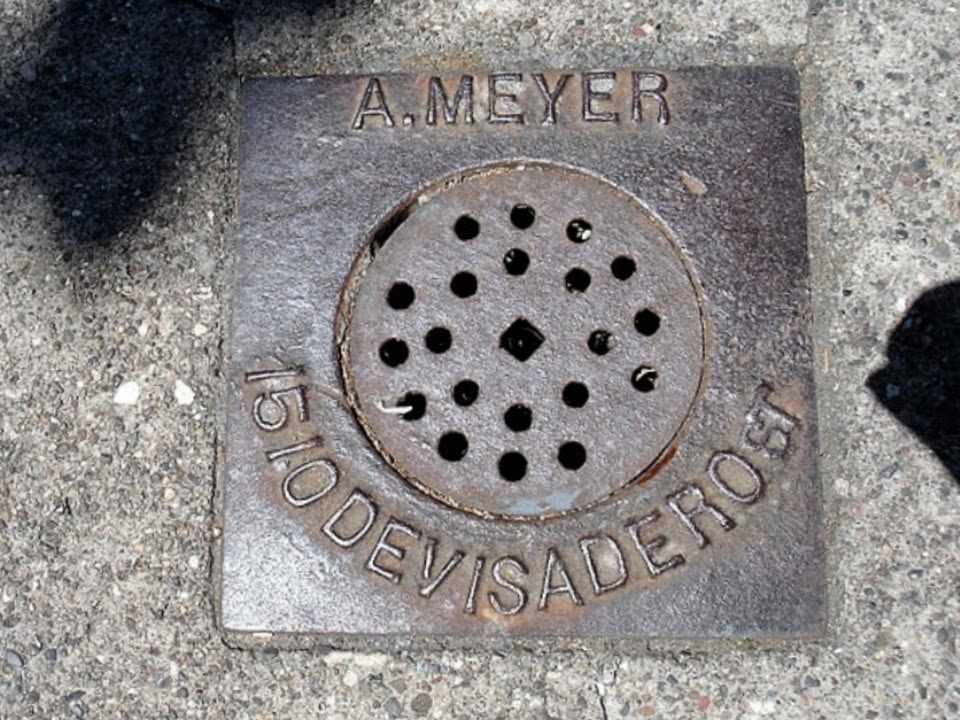 (Photo: Tyler Sterkel)
Over time, these remnants of the former street have slowly disappeared, and now very few people know about Divisadero's past spelling.
But there's a surprise twist: the original spelling may have been correct. According to a Chronicle letter to the editor from 1918 we found via the San Francisco Public Library, the name was actually meant to be "devisadero" -- a Spanish word loosely meaning "guard tower." The term referenced "lookouts located on the northern coast of the San Francisco peninsula," the letter says. One of these towers was located between Cliff House and Baker Street on the ocean, another was on Telegraph Hill, and the third was in the Presidio. We haven't been able to confirm this via other sources, so until we do, you can rationalize using the spelling you prefer.
San FranciscoDivisadero
May 13, 2022