Inside The Neptune Society Columbarium

Photos: Stephen Jackson / Hoodline
By Stephen Jackson - Published on June 20, 2014.
San FranciscoNoPaInner Richmond
The Neptune Society Columbarium is one of San Francisco’s secret gems, a shining specimen of Neoclassical Architecture hidden in plain sight off of Stanyan and Geary.
Originally constructed by Bernard J.S. Cahill in 1898 as part of the Oddfellows Cemetery, The Columbarium (which contains the ashes of the cremated deceased) was the only part of the “big four” that were permitted to remain after the mass graveyard relocation project was completed at the end of the 1930s. 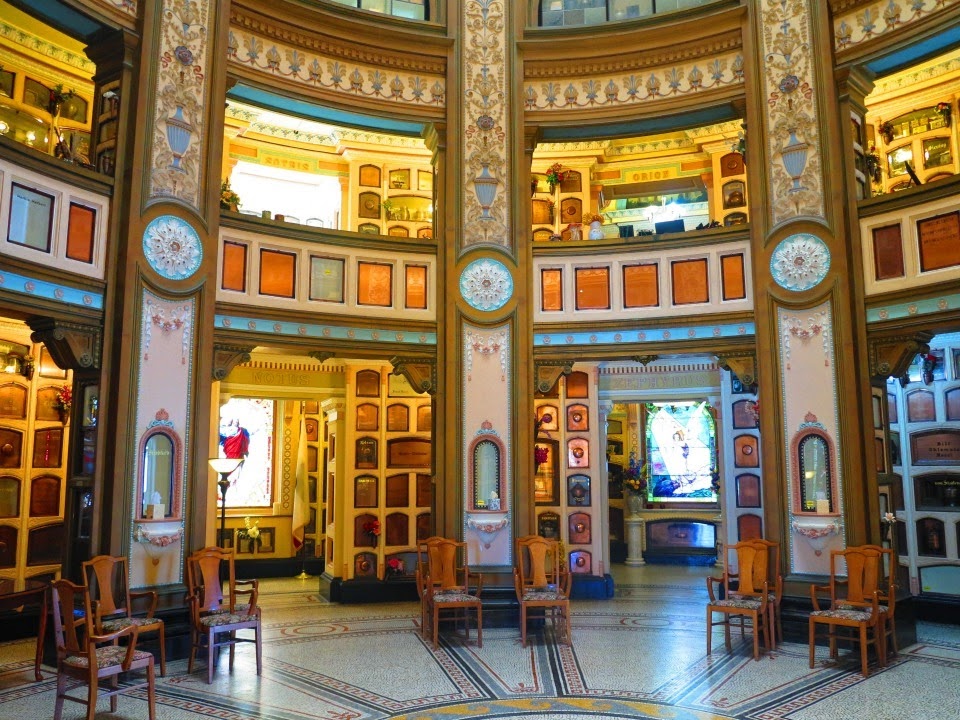 The place changed hands several times in the 20th century, but ultimately fell into a state of disrepair and relative abandonment until The Neptune Society, a company that specializes in cremation services, purchased it in 1980. It then began a long process of restoration, and that’s where Emmitt Watson comes in.
Originally hired to clean and paint the interior of the building, Watson’s role has expanded during his 27-year tenure to include historian, steward, teacher, gardener and all things in between. In fact, he’s risen to a place of local celebrity over the years and has even received the Mayor’s Certificate of Honor for his accomplishments in preserving city history. 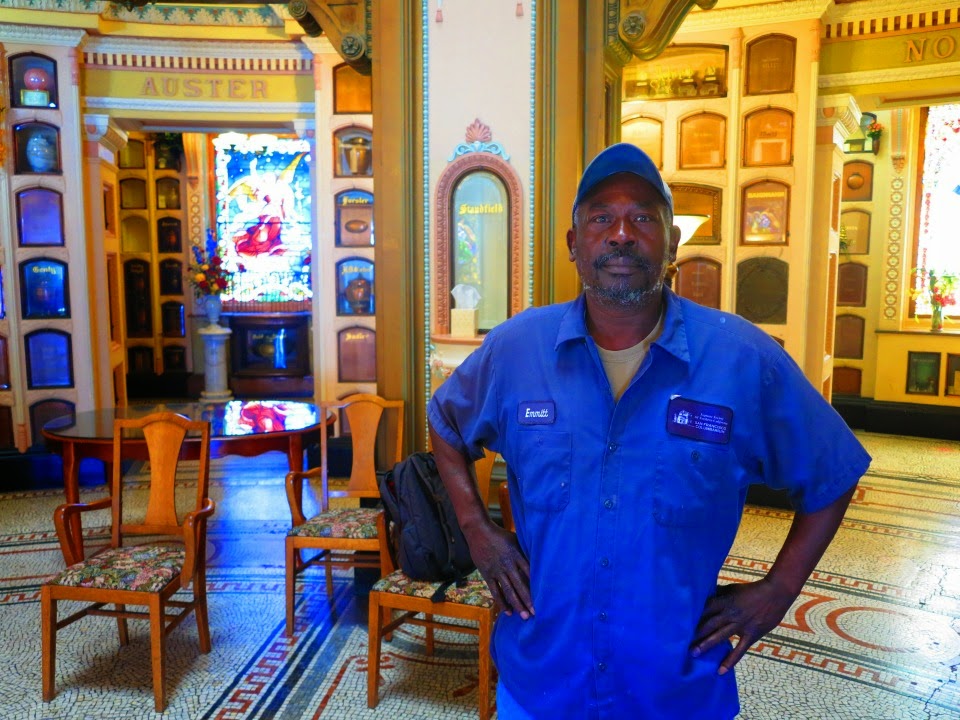 We caught up with Emmitt to chat a little bit about life, death, and being the caretaker of thousands of people’s ashes.
Who are you, where are you from, and how long have you been here?
“My name is Emmit Watson. I’m from Hammond, Lousiana and I moved to the Bay when I was 14 or 15 years old. If you know anything about the way The South was back then, you understand why I left. I’ve been working here for 27 years, since 1988. Back then, it was still considered abandoned. Over the years, some people had removed their family members. But when they heard we were cleaning it up, they brought them back. I heard that before I got here people were coming in and cleaning spots up with Windex.”
What is your specific role here?
“I do everything. Painting, gardening, I do all the internments. I also do parking. I repainted everything in the building from the first floor down. I wanted to bring life to the place and chose colors that would represent life. No point in doing the top part because you can’t see the ugliness up there. You don’t see it, so why waste your energy on that?”
Who is kept in The Columbarium?
A lot of the old San Francisco pioneers are here. The people who built up SF: Haight, Steiner, Eddy, the Shattucks, the Folgers, they’re all here. You also have the Bacons and the Boggs. They started the California Stageline, now Wells Fargo Bank. They are kept right over there in an old money box from a stagecoach.” 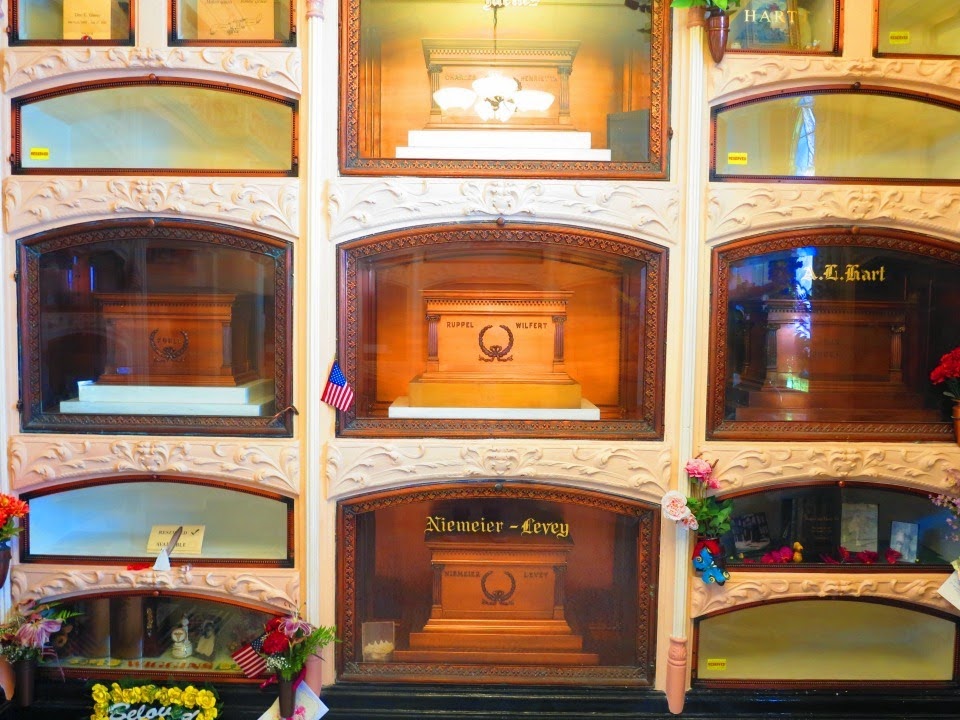 What’s the most unusual or out of the ordinary thing you’ve seen here?
"As far as unusual things go, I’ve seen people put ashes in a martini shaker, a bottle of Johnnie Walker, an Elvis Presley head. In fact, that person has two because their partner isn’t there yet. They’re actually piggy banks. I also put a lady in a big baseball—it was really just a big cookie jar.
"My idea is to see the humor in things. It makes me not trip on the sadness. I don’t like calling these things [spaces for ashes] ‘niches’ because it defeats my purpose. It sounds too morbid and sad. Humor is the key, so I call the small ones ‘apartments,’ the next size are ‘condos,’ and the largest are called ‘villages.’ I also once put a man in a rabbit. That was a cookie jar too.”
What’s your philosophy on life and death, and how has working here affected that?
"You live and you die, but what matters is what happens in between. All of these are just moments ... but I have learned one thing from working here and that’s to live every day like yesterday was your last day."
Why yesterday?
"Because I could have been dead yesterday, but I’m still alive, and if I die tomorrow, so be it."
Do you want your ashes kept here?
"Yup. In a paint bucket."
At the end of the day, what makes this place so special? Why have you devoted your adult life to taking care of people’s ashes?
"Survival, for number one. I like to eat and it’s cold outside. Number two, I consider myself a heart collector. What this place really taught me to do was this: as soon as I walk into my house, I sit back and give myself five minutes to think about the best thing that happened to me that day. In fact, you might be the best thing that happened to me today!”
Emmitt is available for tours of the facility. If you are interested in taking a tour, or would like to know more about the columbarium’s services, you can contact them at (415) 221-0794.
San FranciscoNoPaInner Richmond
Sep 30, 2022