121 Haight in 1921. (Magnes Museum/Flickr)
By Rose Garrett - Published on September 28, 2014.
San FranciscoHayes ValleyLower Haight
From time to time, we like to geek out on the history of a particular local address, and we have a pretty good idea that you do too.
But if you're not into a tale of turn-of-last-century Japanese social clubs, Jewish gymnastics classes, angry anti-Communist mobs and more, just stop reading here.
The is the story of a building at 121 Haight Street, near Octavia.
The Seminary years
121 Haight was a vacant lot of land until 1877, when it was purchased by the San Francisco Theological Seminary (SFTS) for $12,000. The seminary built itself a new temporary home on the site, a handsome three-story wood-framed building boasting twenty rooms. The structure cost $7,000 to build and $1,000 to furnish, according to a report at the time in the Chronicle:

"On the first floor there are a parlor and a lecture-room, each handsomely furnished, and a commodious library, containing some 3,500 volumes of carefully selected theological and historical works. Up stairs are the bedrooms for students, 17 in number, fitted up in a neat and comfortable manner. Students received in the Seminary are charged a moderate price for their rooms, and are given instruction gratis, together with the privilege of the library and the lecture-room."

Upon the building's opening, a special address was given by former governor Henry Huntley Haight, nephew of the man for whom Haight Street is named.
The building would remain occupied by the SFTS until 1891, when, as noted in Robert L. Welsh's The Presbytery of Seattle, the organization outgrew the space and moved its activities to San Anselmo.
The Japanese years
The next year, in 1892, the Japanese Presbyterian Church moved in after purchasing the building for $20,000, according to an article in the San Francisco Call. The organization used the ample space to establish a cultural and religious hub for Japanese immigrants. As the Call described it, "The foreigners enjoy here a reading room, day and night schools, literary societies, club life, a boarding house, and sleep in tasty hall rooms upstairs." (Could they have meant "toasty," or "tasteful"? We may never know.) 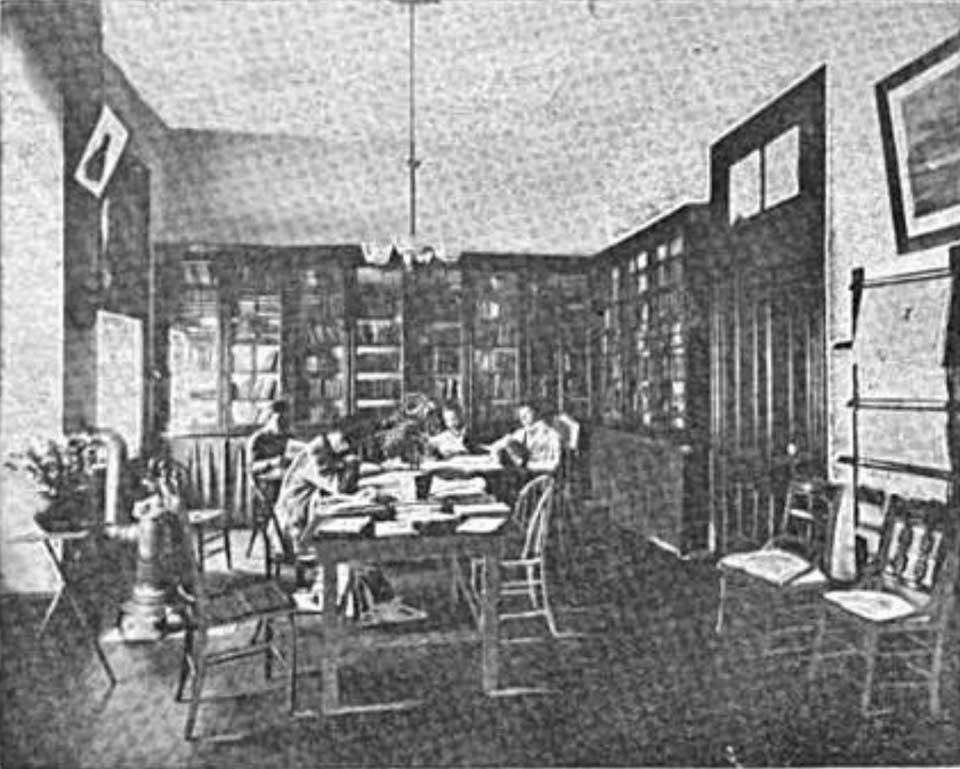 San Francisco Call, September 2, 1892.
The space also hosted one of the first iterations of a Japanese YMCA. Back then, branches of the Young Men’s Christian Association (YMCAs) were racially segregated, according to a history, and in 1875 San Francisco became the first place in the United States where YMCAs were established specifically to serve Asian minorities.
In August of 1886, San Francisco's Japanese YMCA was established by Dr. Ernest A. Sturge, who would oversee 121 Haight's Japanese Presbyterian Church as well as other churches around the city. As Dr. Sturge wrote in 1896:

"The Japanese in California now number about six thousand... The Japanese who do not come under Christian influence, though they doubtless derive some benefit from coming in close contact with western civilization, receive on the whole more injury than good from their sojourn among us, as unfortunately the example set them by the majority of Californians is far from helpful... If we can be the means of giving them that knowledge which is able to make them wise unto salvation, their influence upon Japan must be great and far-reaching." 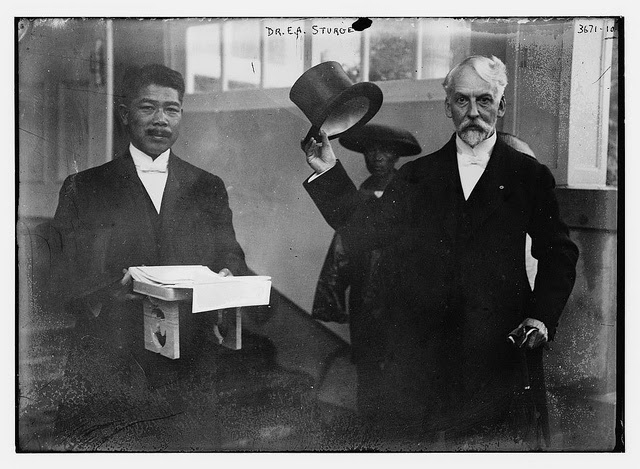 Dr. Sturge (right) in Japan, 1910-1915 (Library of Congress/Flickr)
The church's cultural hub at 121 Haight stayed in action until 1916, when it shut down "due to waning religious enthusiasm during World War I." The Japanese YMCA would bounce around for the next two decades, eventually finding a permanent home at 1530 Buchanan Street, where it still exists today.
The Jewish years
After the Japanese church and YMCA moved out, 121 Haight was quickly snapped up in 1917 by the Young Men's Hebrew Association (YMHA), yet another youth organization eager to put down roots (and get fit).
According to Jewish Community Center records, a small full-time staff was hired, and the organization began to provide "educational, cultural, social, and recreational programs" to its members — and to its sister group, the Young Women's Hebrew Association (YWHA).
One example? This not-at-all-awkward YWHA gymnastics class in 1919: 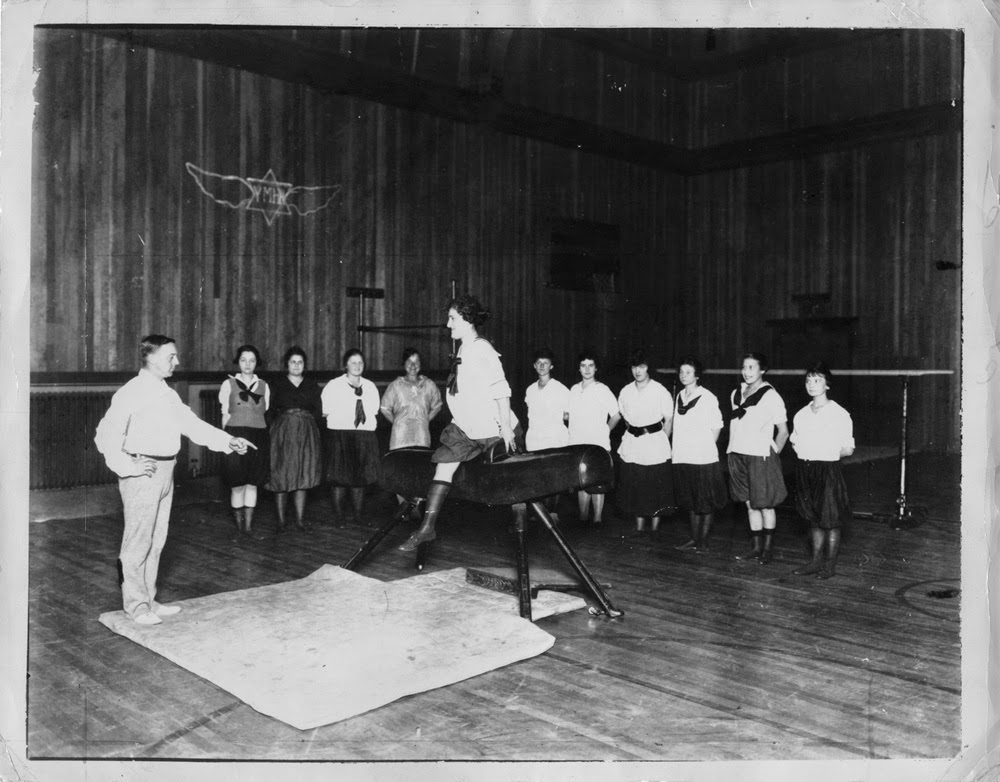 (Magnes Museum/Flickr)
During World War I, the house was used as a Red Cross Auxiliary, with rooms converted to multi-person dormitories and services offered free of charge to military personnel. This is according to Edward Zerin's Jewish San Francisco, which contains this photo of the 121 Haight Street nurses looking unsure whether to smile or not: 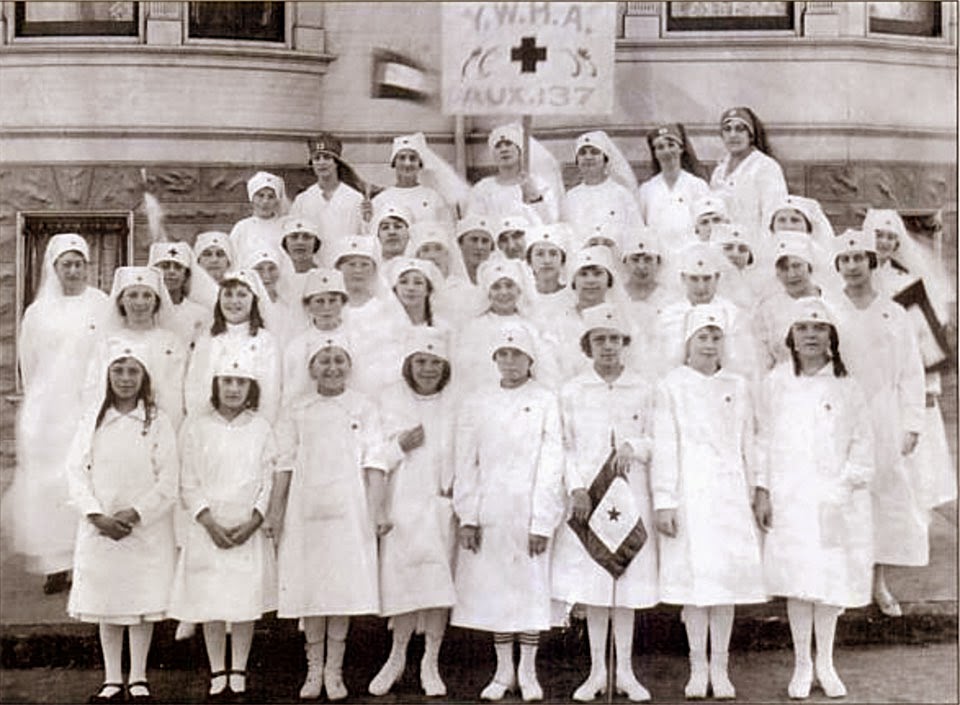 After offering succor to soldiers, the YMHA merged with the YWHA, and was given the catchy acronym "YM-YWHA." The new organization shared the 121 Haight Street house with the Jewish Welfare Board, and the whole thing looked something like this: 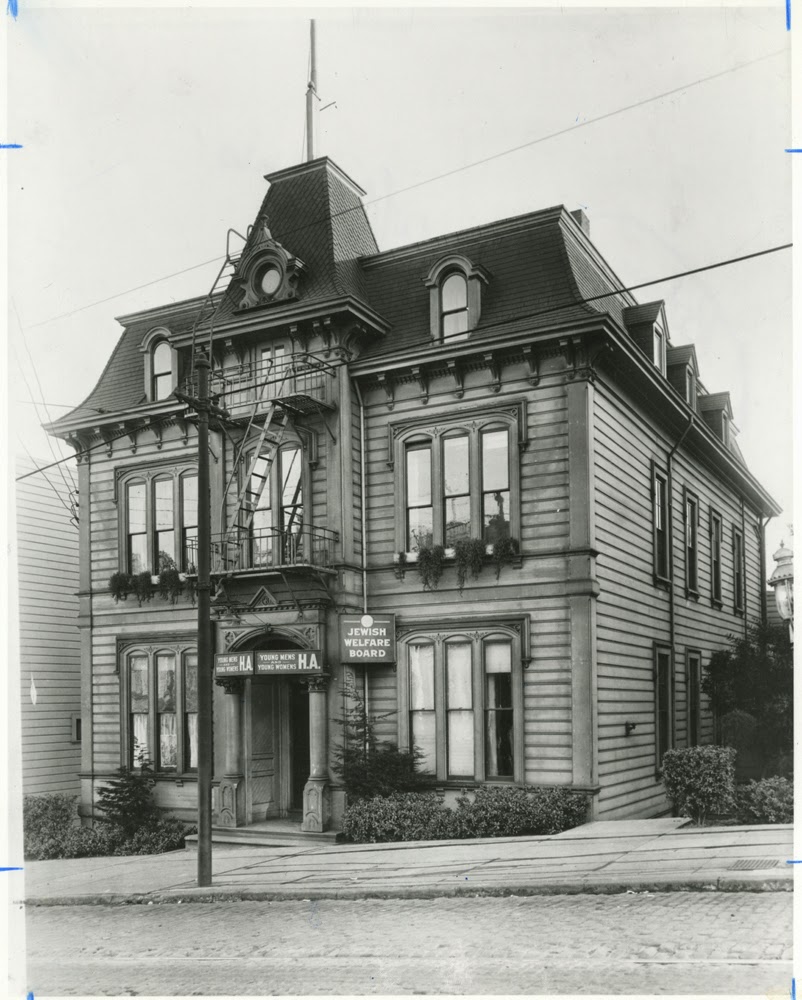 121 Haight in 1921. (Magnes Museum/Flickr)
In 1923, the Federation of Jewish Charities conducted a survey and concluded that a larger, more comprehensive facility was needed, and the organization spent the following years planning and fundraising for a new space. Ground was broken at 3200 California Street in 1932, and the new location opened in 1933, with the Jewish Community Center still operating there today.
The Communist year
After originating two of San Francisco's modern-day YMCAs, the story behind 121 Haight Street got a little crazier, with the YM-YWHA renting its newly vacated space out to Worker's International Relief, an organization centered around supporting Communist ideology.
In the interest of space, we won't get into the incredibly complex and potent cocktail of the Depression-era union organizing action, rabble-rousing, police action and political and social undercurrents that characterized the San Francisco of 1934 and lead up to the great West Coast waterfront strike in the summer of that year.
But needless to say, it was a heady time over at 121 Haight, which had also come to be known as the Ruthenberg House, and now housed a Communist "Workers' Cultural Center" complete with a school, library, showers, restaurant, ballroom, stage and Foto & Film League school and darkroom.
According to an advertisement in the December 1933 issue of the Western Worker, the space now offered evening classes costing $1 per course ($.50 "if unemployed"). Sample classes listed included Dialectical Materialism, Workers Self Defense, Marxian Economics, Trade Union Strategies and Tactics, and Revolutionary Theater, among others: 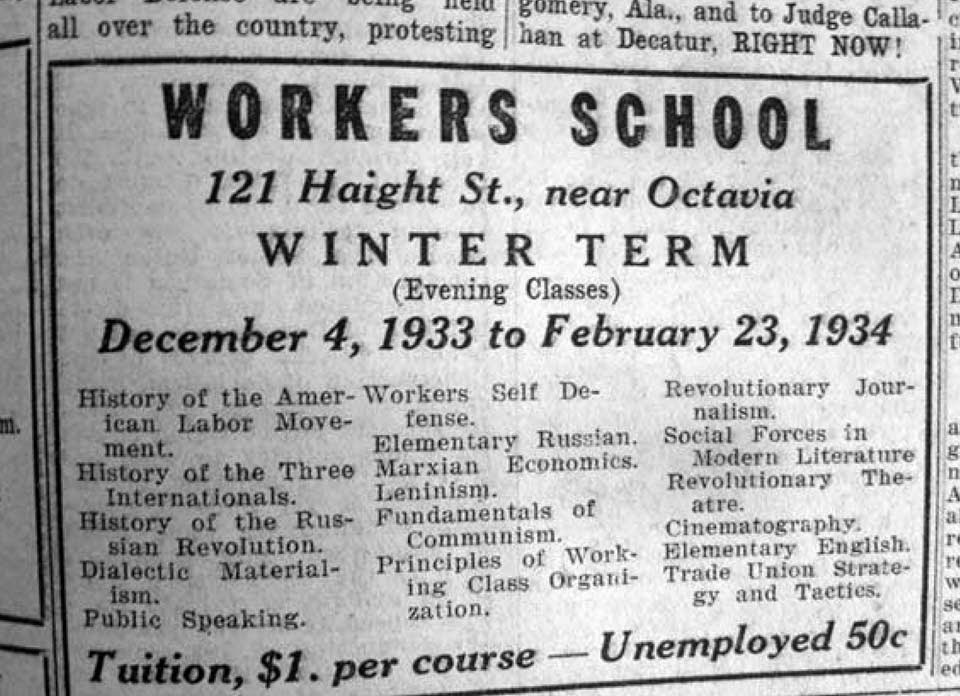 In the summer of 1934, a general strike in sympathy with the International Longshoreman's Association had gotten underway, and the city was gripped with tension. On July 17th, some of that tension boiled over into mass police arrests of suspected agitators and Communists, as well as coordinated vigilante attacks on Communist hangouts around the city.
Here's the account from that day, as published in the Daily News:

"Gangs of roughly dressed men, armed with rocks, clubs and heavy gloves, were raiding radical centers this afternoon. Operating swiftly and mysteriously, the men invaded and wrecked the offices of the Western Worker, Communist newspaper headquarters at 37 Grove st., then sped in autos to the Workers' School, distribution center for Communist literature, at 121 Haight st. Windows and furnishings in both places were battered to pieces."

As the Chronicle reported, vigilantes broke windows and threw typewriters, furniture and Communist literature out of the window, with several occupants escaping attack by leaping from the second floor. The next day's Daily News reported that three men had been arrested at 121 Haight, questioned by the Capt. O'Meara of the police Anti-Radical and Crime Prevention Bureau, and charged with vagrancy, though one man "claimed to have routed the attackers with an old sword" (in other accounts, there was also a bayonet involved). 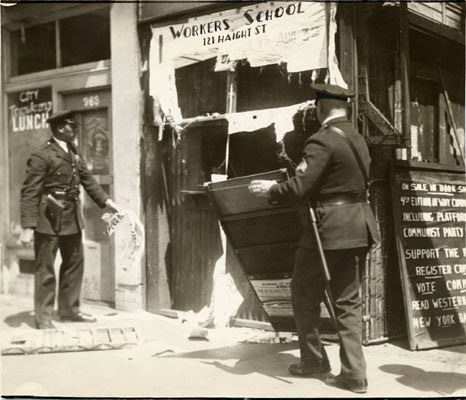 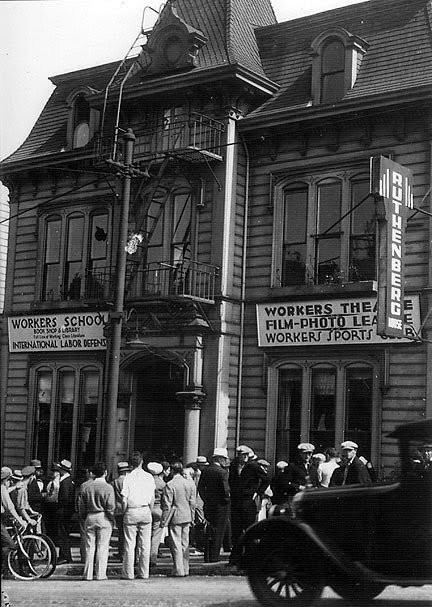 July, 1934 (Roger Photo Collection, Labor Archives and Research Center, SFSU via Found SF)
The waterfront strike, which had lasted 83 days, ended on that day in July, and so, it seems, did the Workers' Cultural Center at 121 Haight. "These Communist hangouts raided today and yesterday must not be reopened," Capt. O'Meara is quoted as saying. "Anyone attempting to reopen them will be jailed."
The end of 121 Haight
The next decade in the history of 121 Haight is foggy, but we pick the trail back up in February of 1945, when The First Baptist Church began preparations to buy the property on Haight. The church had opened its iconic Octavia Blvd. outpost in 1909, and the 121 Haight property more or less abutted the rear of the church, making it a handy spinoff space. 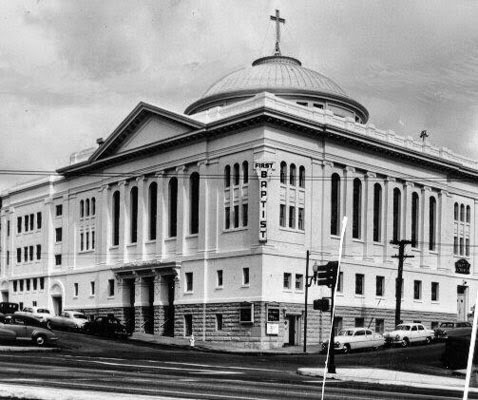 The First Baptist Church, 1953 (via San Francisco Public LIbrary)
In 1958, the building at 121 Haight was demolished by the church and part of the land paved over for a parking lot, which was enlarged with the 1983 addition of the address formerly known as 145 Haight. It has remained a parking lot to this day — and now likely looks only slightly different than it did before 1877, when its colorful modern history began. 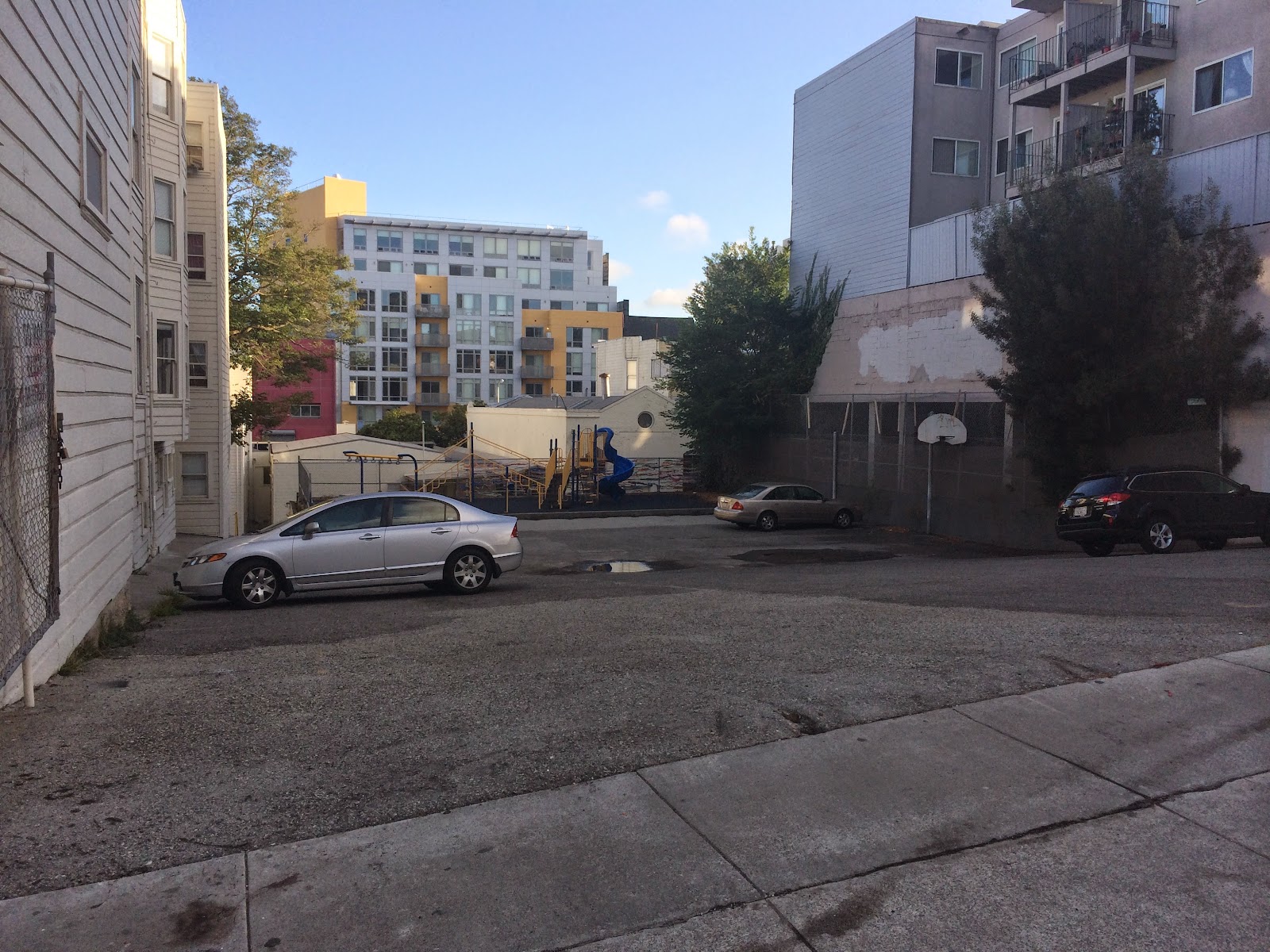 Rose Garrett/Hoodline
If you've made it this far, you've just learned a whole lot more than you (or we) expected could be found digging deep into just one neighborhood address. From the humble beginnings of both the Japanese YMCA and the Jewish Community Center to a pivotal day in the history of San Francisco labor disputes, the building certainly saw a lot of history while it lasted.
Rest in peace, 121 Haight Street, and thanks for all the memories.
San FranciscoHayes ValleyLower Haight
Dec 08, 2022