If you happened to walk by the Stand Theater on Market Street this weekend, you may have noticed that the plywood construction barrier has finally given way to a completely renewed lobby that looks just about for theatergoers. The American Conservatory Theater is in fact cutting the ribbon on its new home at 11am this Thursday and draws the curtain for the first time June 3rd.

It was amazing to see the walls around the building finally come down, said Artistic Director Carey Perloff on a recent tour of the nearly-complete Strand Theater. The venue was built in 1917 as a silent film house. It changed hands and names multiple times throughout its long history, but always remained a theater. Its final act, before being raided and boarded up by the SFPD in 2003, was as a porn theater plagued by prostitution and drug dealing. While the Strand was in ruin when they first walked through in 2012, Perloff said the space was exactly what A.C.T. had been looking for — an intimate yet expansive theater.

Once inside the lobby doors, it's easy to see what she means by expansive. Visitors are surrounded by stark white walls climbing two stories high, and greeted by an enormous, brightly-lit LED screen that flashes "experimental content". (The theater's large windows allow passersby to see the screen from as far as Civic Center Plaza across the street.) 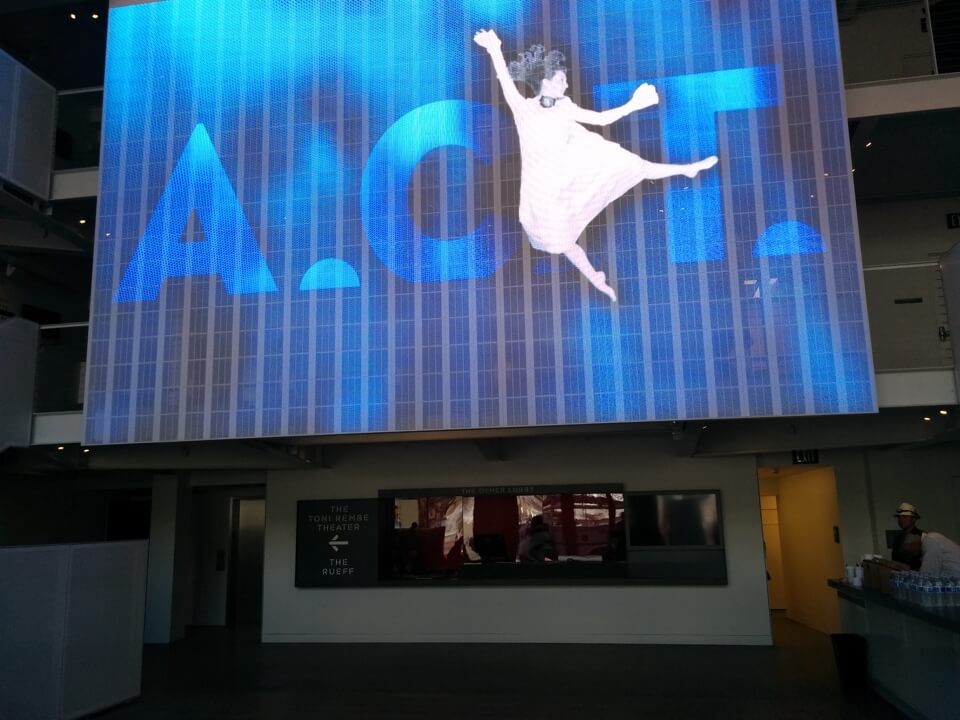 The transparent screen allows viewers to see movement behind the screen.

A.C.T. wants the new Strand Theater to be "used in multiple ways all the time", Perloff said, and designed the lobby to serve as a "gathering space" for both theater patrons and neighbors. Performances will be held in the space regularly, and the Strand Cafe, with Wi-Fi and ample seating, will serve the community from 7am to 3pm daily — hopefully ahead of the June 3rd curtain call. 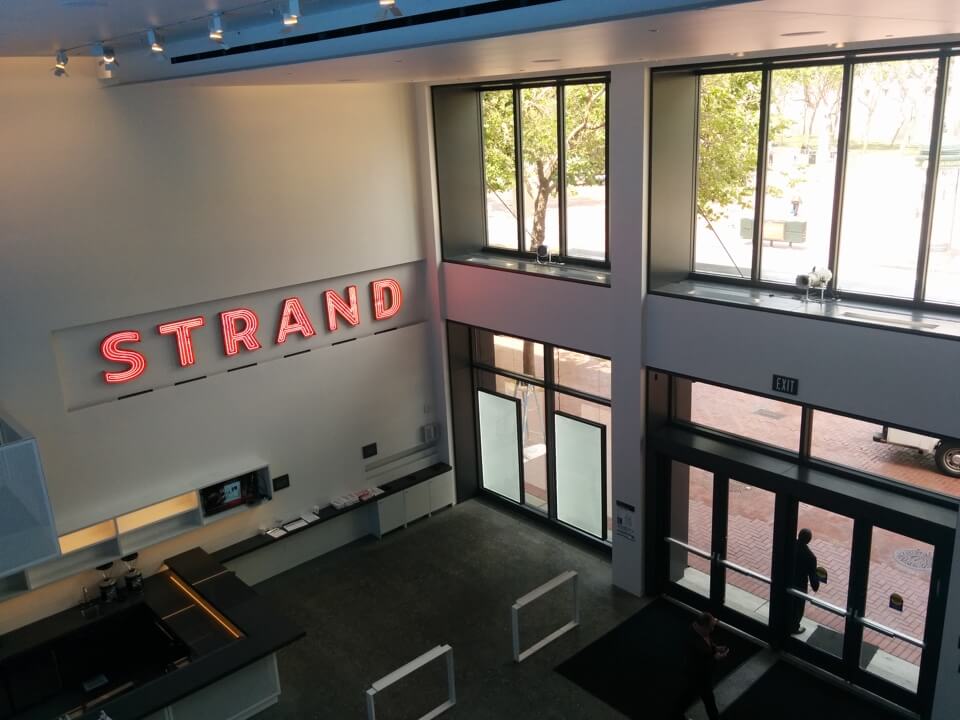 Looking down on the lobby cafe, which features the refurbished Strand Theater sign.

Moving past the lobby, the 283-seat main stage theater is where the venue's intimacy comes in. The original stage has been expanded and not a single seat in the house is more than 55 feet from it, Perloff said, making it feel like you really are in the same room as the actors no matter where you sit. The orchestra section can also be quickly transformed into cabaret seating with table service when performances like live music or spoken-word are on the bill. 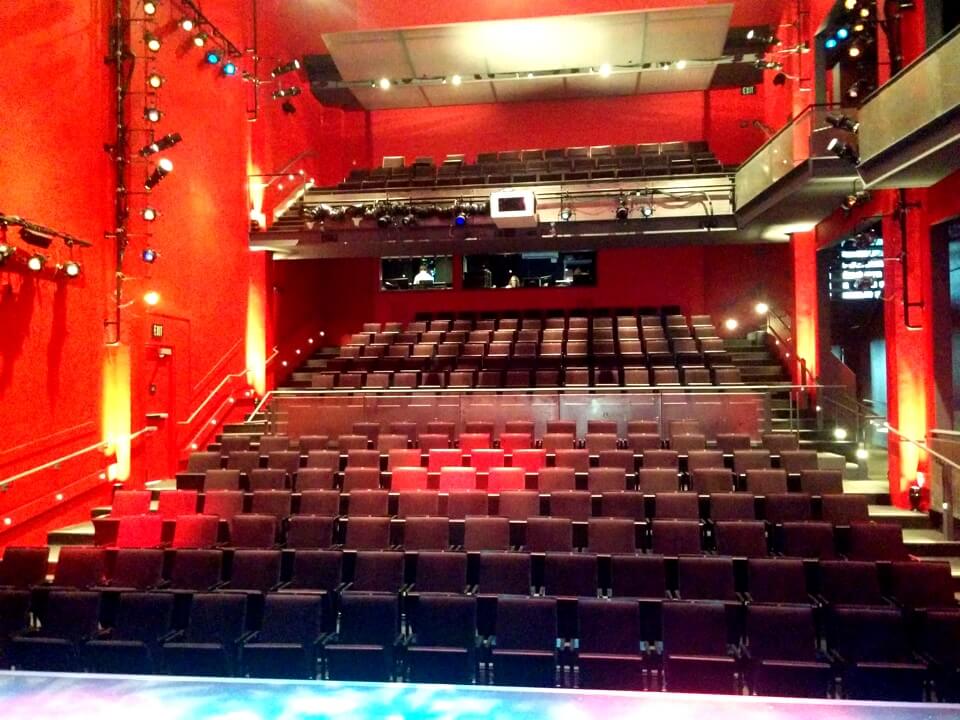 The new Strand Theater's third performance space is located above the lobby, looking out onto Market Street. The 140-seat space will host A.C.T.'s education programs and new works, as well as visiting companies like The Magic Theater and San Francisco Playhouse Theater. 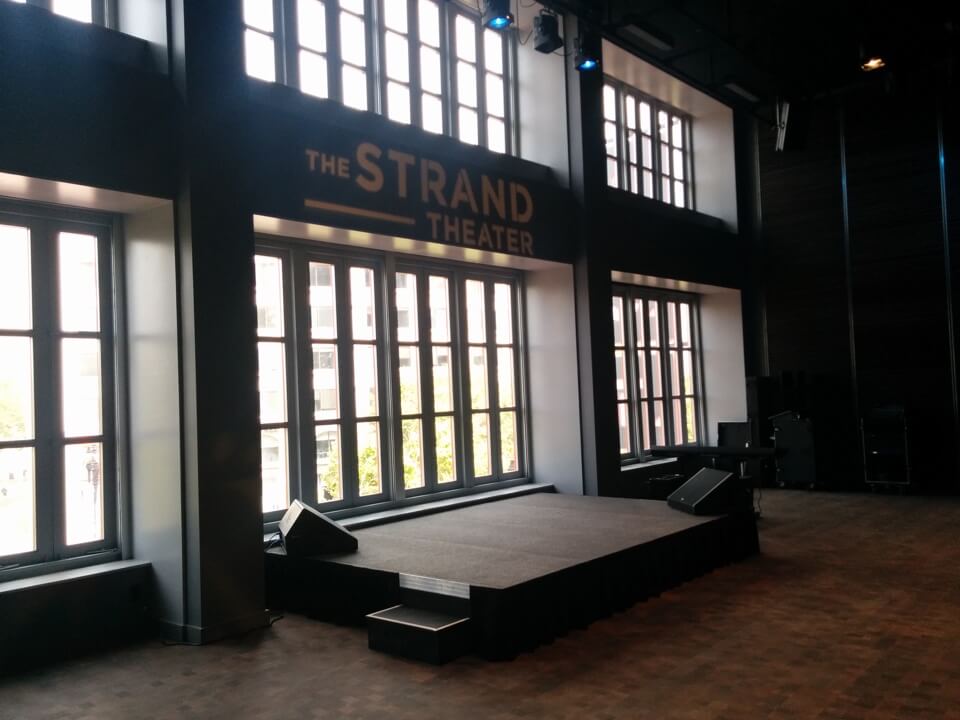 With its Mid-Market location, it's no wonder that the first performance on the refurbished main stage will focus on technology. By iconoclast playwright Caryl Churchill, Love and Information features 57 brief scenes that create "a world where data inspires obsession, and FaceTime conversations and celebrity selfies threaten to replace human contact IRL", and it "reminds us that no matter what the latest gadgets and hottest Internet memes are, the primary currency of choice will always be connection." The play will run from June 3rd through August 9th, and tickets range from $45 to $100.

Still, A.C.T. is committed to making the space "useful and fun for the neighborhood in every way," Perloff said. A free open house is scheduled from 9am to 12pm Saturday, June 13th, giving anyone who stops by the opportunity to tour the space.

From ushers to bartenders and baristas, there are also jobs to be filled, Perloff said. "It's not just acting; there are plenty of ways to be employed at the theater." In the future, she dreams of teaching technical theater classes at the Strand, which would bring even more employment opportunities to the neighborhood.

To dive even deeper into the Strand Theater's color history and go behind-the-scenes of the renovation process, have a look at the video below by Stark Insider.