Pride weekend, held this year on June 27-28, will mark the 20th Pink Triangle installation on Twin Peaks. For every Pride since 1996, the Pink Triangle has appeared as if by magic to overlook the celebration; juxtaposed against the weekend's revelry, some may not know that the symbol—200 feet across and visible from over 20 miles away—was used to label homosexual prisoners under Nazi Germany before becoming a mark of local LGBTQ pride.

The triangle was founded by Thomas Tremblay, Michael Brown, and Patrick Carney. Carney tells Hoodline that the triangle started as an attempt to add a little extra color—pink, it turned out—to the 1996 Pride Parade. 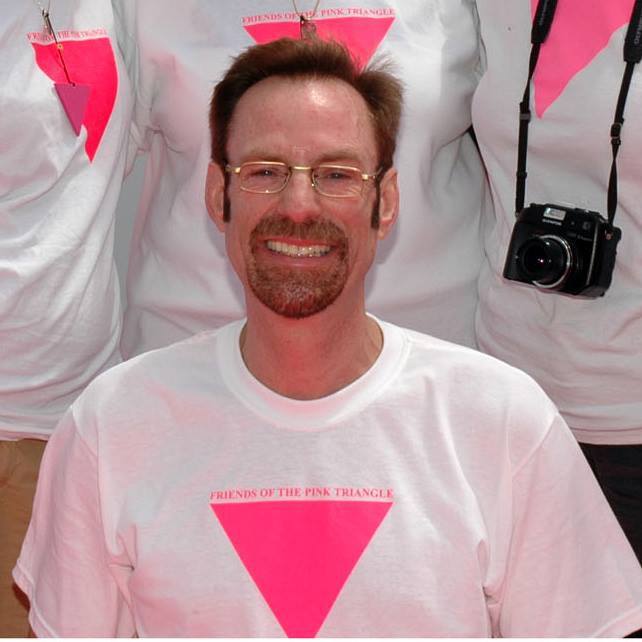 "My friends and I were sitting in a restaurant on Market Street, wondering how we could spread the weekend's festivities to other parts of the city," recalls Carney, an architect and San Francisco resident of 35 years. "We noticed a huge blank canvas right outside the window: Twin Peaks. Just a few weeks later the Pink Triangle of Twin Peaks was born."

In working on the project, Carney realized how many people were unaware of the symbol's use in Nazi Germany. "To many people, the pink triangle is a brightly colored graphic image which has come to represent the LGBT movement, and there is often no connection to the tragic history of how the symbol came about," he explains. "In the 1930s and '40s, the pink triangle was used by Nazis in concentration camps to identify and shame homosexual prisoners and differentiate one 'undesirable' group from another." Carney realized that in using the symbol, he could spread knowledge about its history while appropriating it for good. 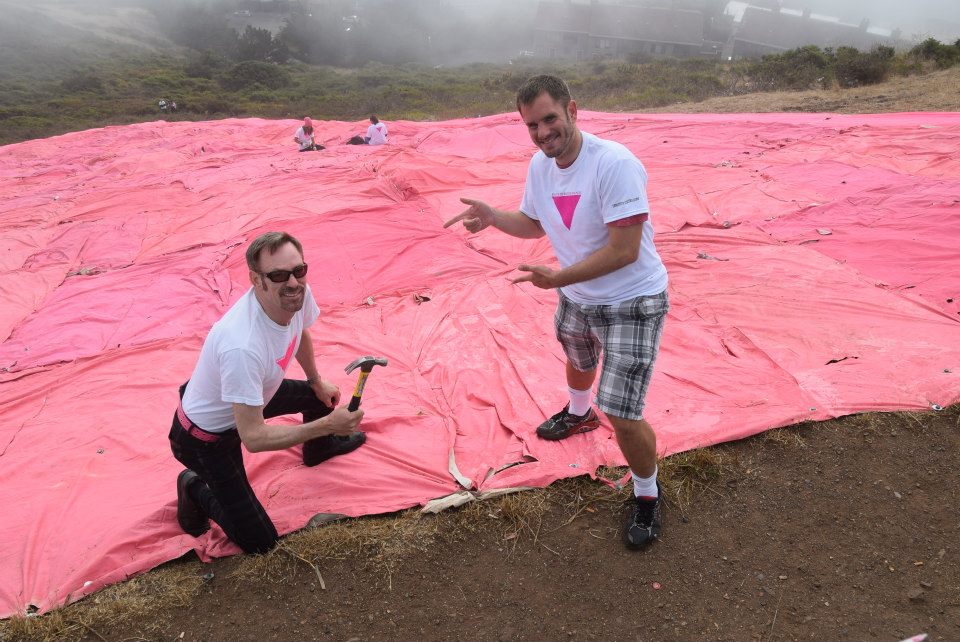 The Pink Triangle is made up of 175 bright pink tarps and two pieces of 200-foot by four-foot pink sail cloth. It has grown in size many times, requiring more and more hands with each expansion, and now takes up nearly an acre of hillside on Twin Peaks. The intense wind on the hill shreds the tarps over time, though 12-inch spikes and washers help to hold it all down.

"When the Triangle was first installed back in 1996, it was aligned more directly with Market Street," Carney tells Hoodline. "After doubling in size the first time, it was moved north into what was then a meadow." Carney notes that there's been a bit of an issue with non-native plants taking over the area. "In order to take care of this, The Mayor's office asked DPW last year to send up some goats to eat some of the weeds and poison oak. You might be able to catch a glimpse of the goat in a few days when they are sent back up there to clear out the area again."

"Although The Pink Triangle is now large, perhaps the most gigantic aspect of the display is not its size, but how many people it has hopefully educated and inspired," Carney says. "We install numerous placards along the edge of the tourist overlook, which is a few feet above the top edge of the triangle.  We like to stay back and observe people reading the signs which describe the project and hear how they all universally seem to say, 'I didn’t know that.'  It means the education process is working." 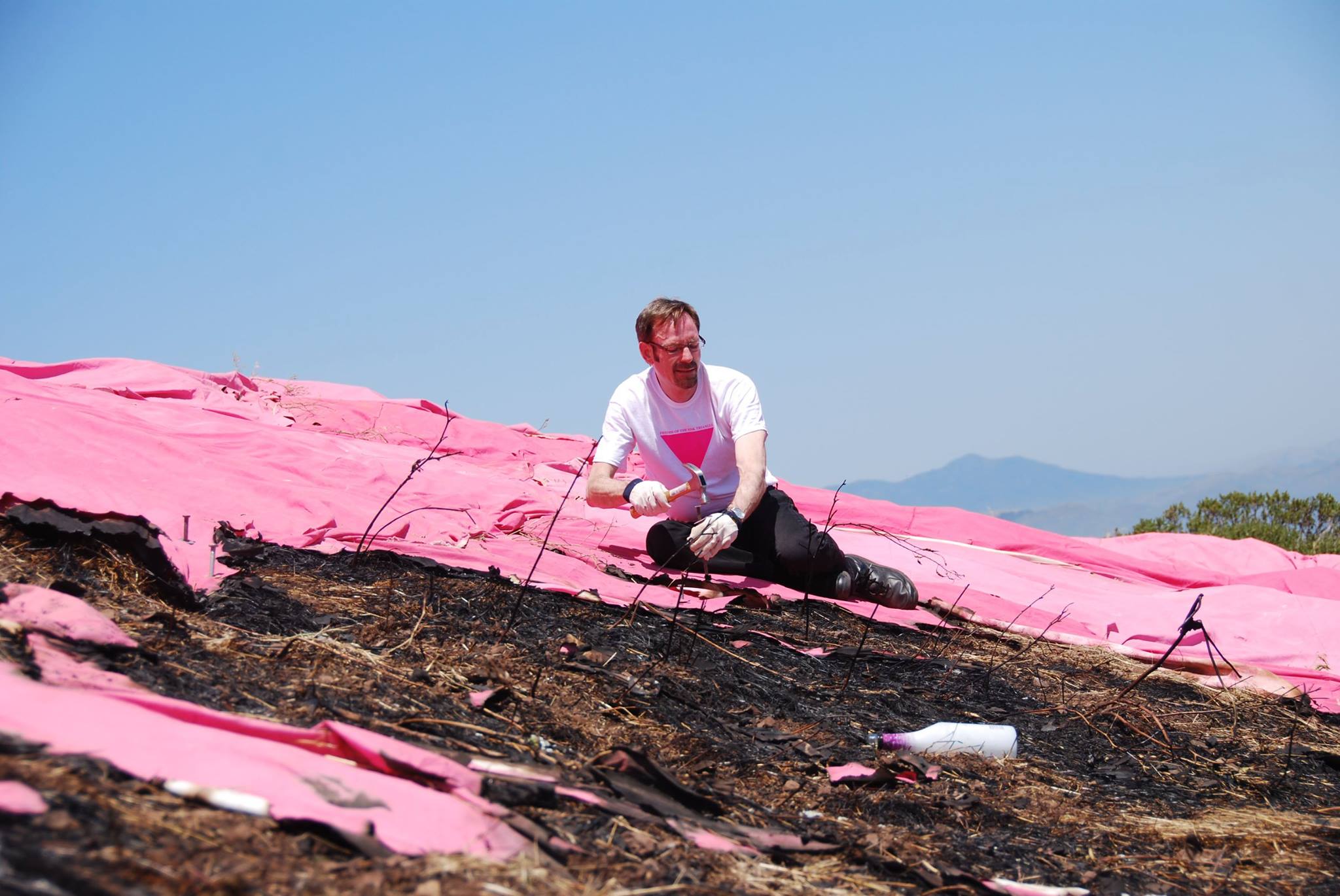 In 2009, the Pink Triangle was struck by an arsonist who burned approximately 20-30 feet of tarp in the middle of night. The placards explaining the triangle's significance were also vandalized. "It was particularly disheartening because it happened during the 40th anniversary of New York's Stonewall Riots, which are generally regarded as the beginning of the modern LGBT rights movement," Carney recalls.

After 20 years of installing the triangle, we asked Carney what keeps him motivated. "A big motivation and inspiration for keeping the annual San Francisco Pink Triangle display going was learning that after the [concentration] camps were liberated, and all of the other prisoners were let go, the gays were then put back in prison," he explains.

"I was abhorred by the fact that the discrimination and dehumanization continued simply because they were homosexual. It was amazing to me that after all of the carnage and horror of the camps was revealed to the world via newsreels, and people around the globe were unified in shock and disbelief, somehow it was still okay to throw the gays back in prison. It's important that people realize that this kind of hatred and discrimination doesn’t exist here, but there are plenty of places in the world where it is still very common to discriminate against homosexuals." 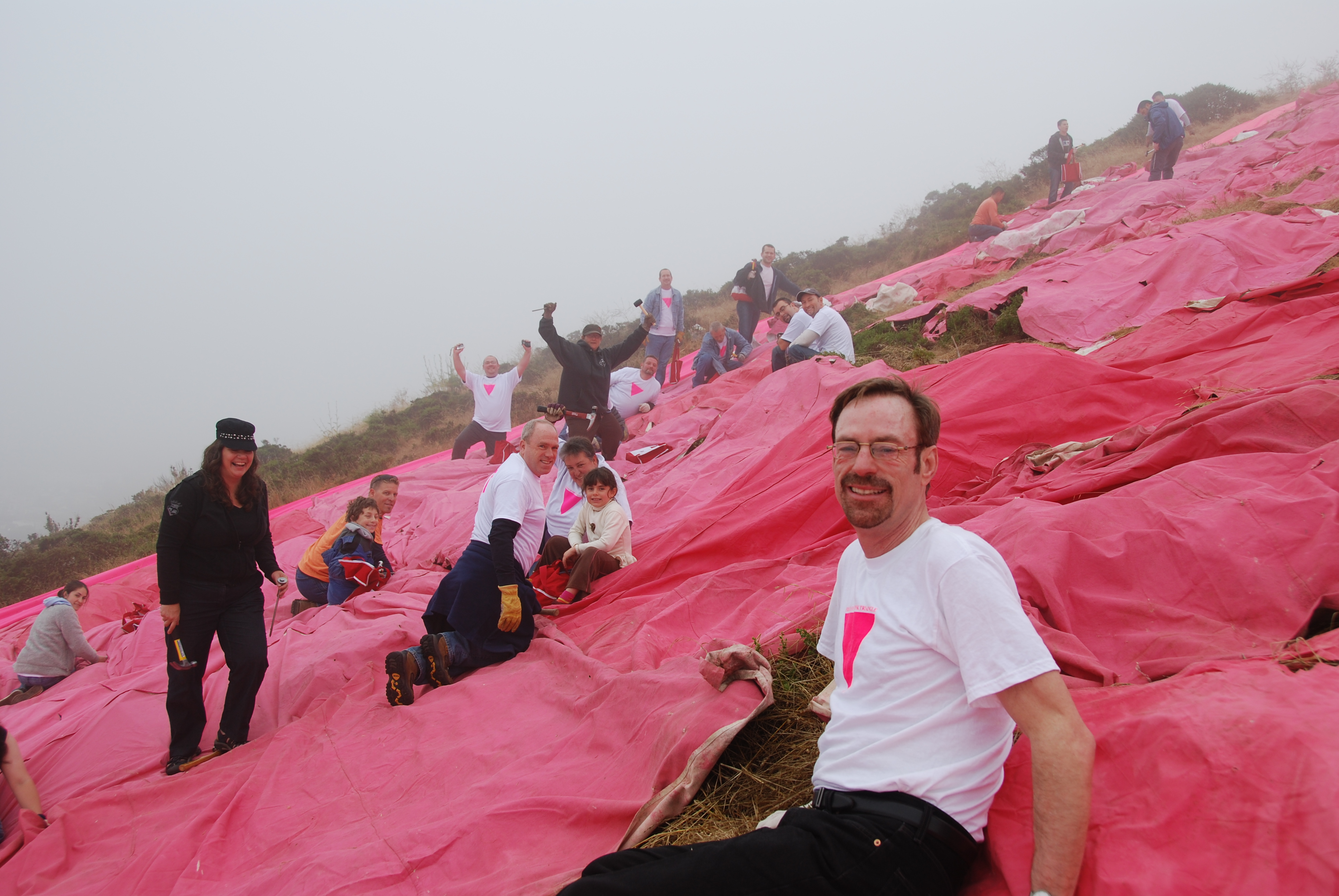 As part of Pride and the Pride Parade this year, Carney is being honored with the 2015 Gilbert Baker Pride Founder's Award, which "honors those who have made a significant and historical impact on the LGBTQ community and the movement for LGBTQ rights." He will be in the parade, riding in a pink-wrapped BMV convertible. "I tried to locate a 1959 Pink Cadillac Coupe de Ville convertible with huge tails fins but was unable to find one for hire in Northern California," Carney tells Hoodline.

Joining Carney will be his 91-year-old mother, along with friends who will be marching on both sides of the car, wearing pink triangle shirts and carrying pink balloons. Following behind the convertible will be a large pink arch and more pink outfits, include pink balloon wings. In short, there will be a lot of pink. 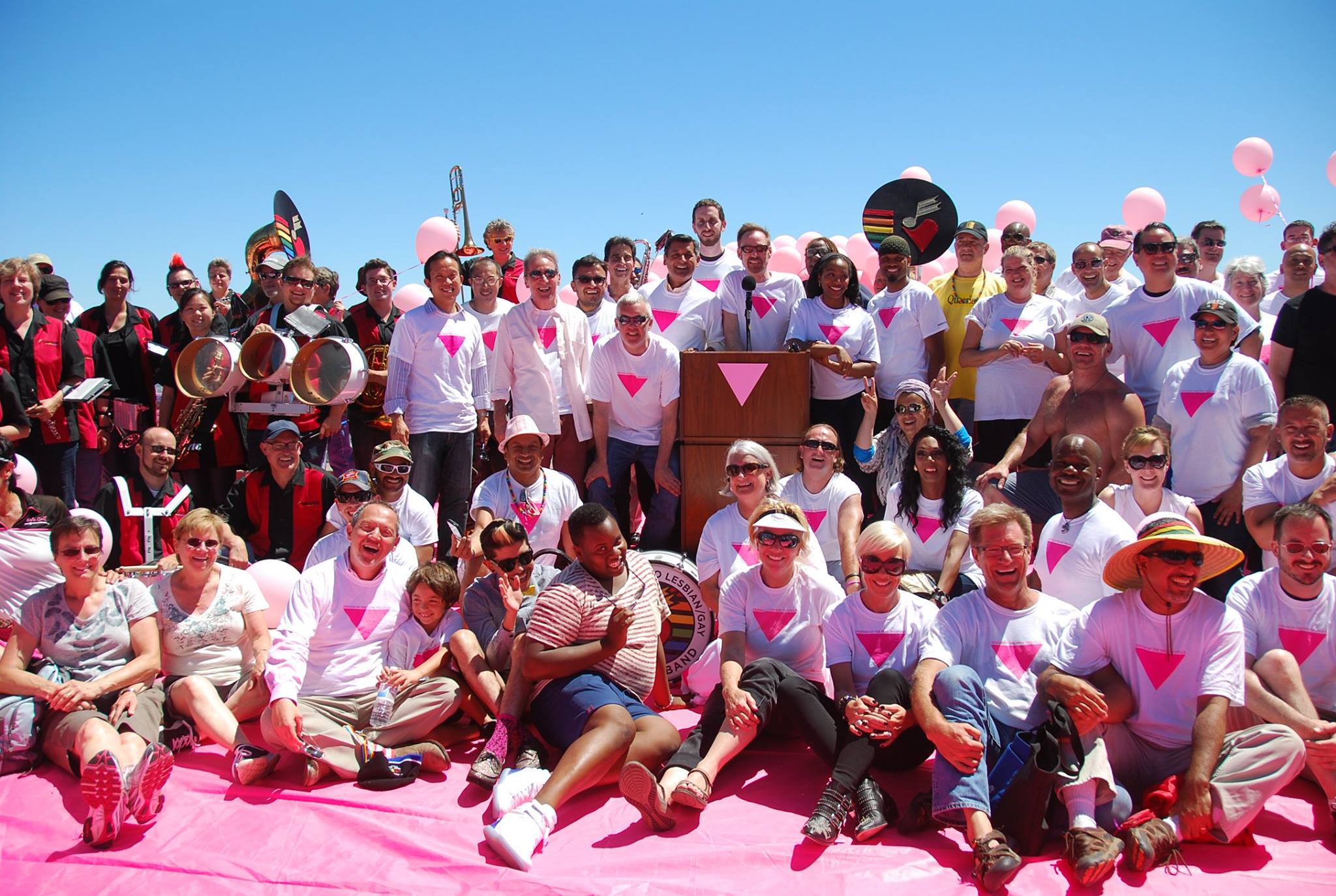 To fund the triangle, Carney has put in a lot of money over the years, but lately—as the economy has improved—he's seen a wave of consistent donors. This year alone, Carney has raised more money than ever through speeches and presentations to local groups, organizations, and business owners. If you'd still like to help in the fundraising initiative you can join the Haus of StarFish, which will be hosting its 2nd Annual Pink Triangle Beer Bust Fundraiser on Sunday (June 14th) at The Eagle.

If you'd like to get more involved, Carney reminds us that the Pink Triangle cannot be installed without the help of many volunteers. It'll take about 125 people to install it on the morning of Saturday, June 27th and 50 to take it down on Sunday evening. On the day before the installation, Carney outlines the triangle with husband Hossein Sepas Carney and sister Colleen Hodgkins. "We load up tons of tarps, steel spikes, and other equipment in to a rental truck and then install the outline," Carney explains. "Having the outline makes it much easier the next day once the volunteers arrive. When they get there they will fill in between the pink lines with 175 bright pink tarps and over 4,000  steel spikes."

Those interested in helping out can learn more here. If you've never helped install the Pink Triangle before, it's a great way to start out Pride weekend. To get a better sense of what installation looks like, check out the 2011 video below: