Friends Of The Urban Forest Heads To The Inner Sunset

Photo by Friends of the Urban Forest/Flickr
By Caitlin Harrington - Published on June 13, 2015.
San FranciscoInner Sunset

Live in the Inner Sunset and want a tree? Nonprofit group Friends of the Urban Forest is coming to the neighborhood (as well as to West Portal) to do a planting on August 1st. Applications are due June 24th, so if you’ve been wanting to add a little green to your home or business, you’ve still got about a week and a half to get one in.

Ben Carlson, who handles FUF's public relations, said the city still has a lot of untapped urban forest potential. “We think about half of [the] eligible spots in San Francisco have yet to be planted,” he said. To be eligible, a sidewalk needs to have four feet of unobstructed space after a tree is planted, to comply with the Americans with Disabilities Act. Trees must also steer clear of underground utilities, "but there are plenty of unplanted spots that meet this criterion,” noted Carlson.

Currently, 13.7 percent of San Francisco is covered by trees. That places the city near the bottom in a ranking of major U.S. cities’ canopy coverage (it's currently 17th; Atlanta is first). To make matters worse, dying trees are outpacing new plantings. “Trees, like people, die,” Carlson said. “And trees are being planted right now, but they’re not replacing trees that are dying. So not only is our urban forest small, but it’s shrinking.” 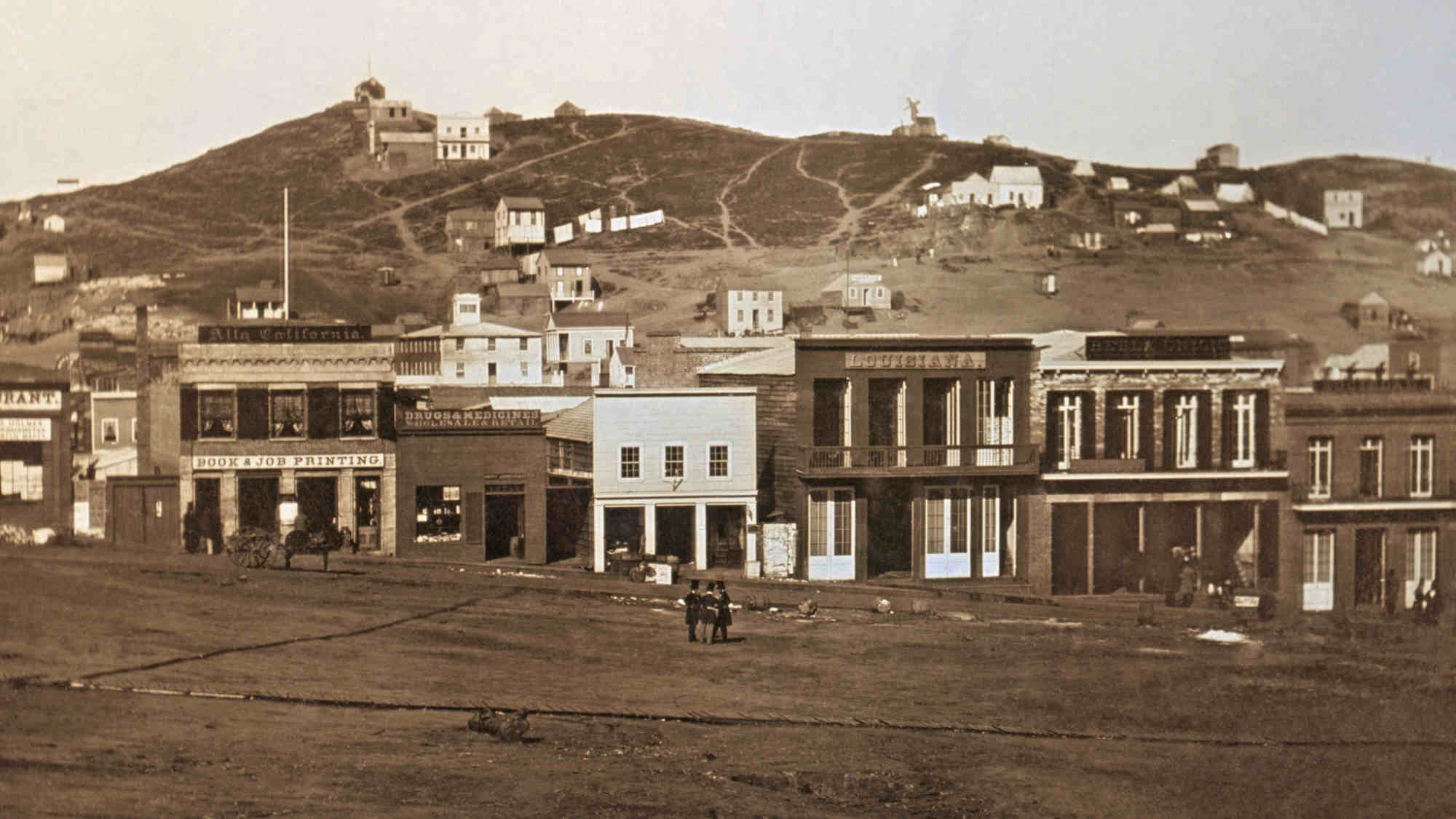 San Francisco without (many) trees. Photo: Friends of the Urban Forest/Flickr

As we’ve reported, thanks to decades of funding cuts, the Department of Public Works embarked in 2011 on a seven-year plan to transfer responsibility for most trees to property owners. FUF is working to reverse this, collaborating with city agencies to devise an Urban Forest Plan to grow and fund the city’s trees. It may include a ballot measure in 2016. “One of the things we’re working hard to do—and we want property owners to know this—is to get the city to take over responsibility for maintenance,” Carlson said.

Carlson said that while the drought hasn’t affected FUF’s planting frequency, it has affected tree mortality. “Trees have been suffering because they’re not getting enough water, and young trees have been suffering because the property owners aren't providing the recommended care. So we’re really trying to frequently remind our tree recipients about the importance of watering.” FUF's suggestions for water-wise tree care include evening watering to reduce evaporation, spreading water-retaining mulch, and using gator bags—green vinyl bags that can be installed at the base of a tree to slowly release water into the soil. 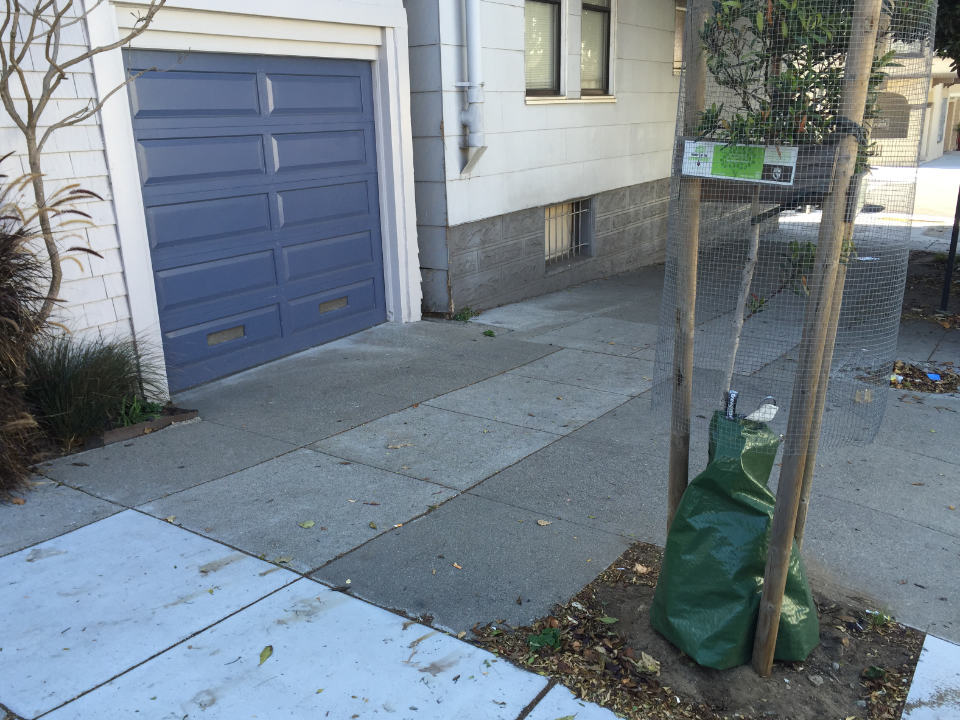 A gator bag on a FUF tree on 4th Avenue. Photo: Caitlin Harrington/Hoodline

Cheryl Switzer, who lives at 12th and Irving, had two FUF trees planted in front of her home in 1987, and has since participated in other neighborhood plantings. "It really softens the neighborhood," she said. "We don't really have the most beautiful architecture in this area. It’s hit-and-miss. And the trees just make it look more inviting. There are a lot more birds outside of my window because of the trees, which is pleasing.”

FUF collects applications until they reach critical mass for a planting session in a neighborhood, usually at around 30 trees. If you sign up for a FUF tree, they’ll take care of the preparation, which includes assessing and cutting the sidewalk, planting, and assisting with the follow-up care for the first three years, when trees need the most TLC. They also make tree species recommendations based on the neighborhood's climate and soil. Property owners pay a co-pay (typically $135) that covers about 25-30 percent of the tree's cost, and FUF picks up the rest. 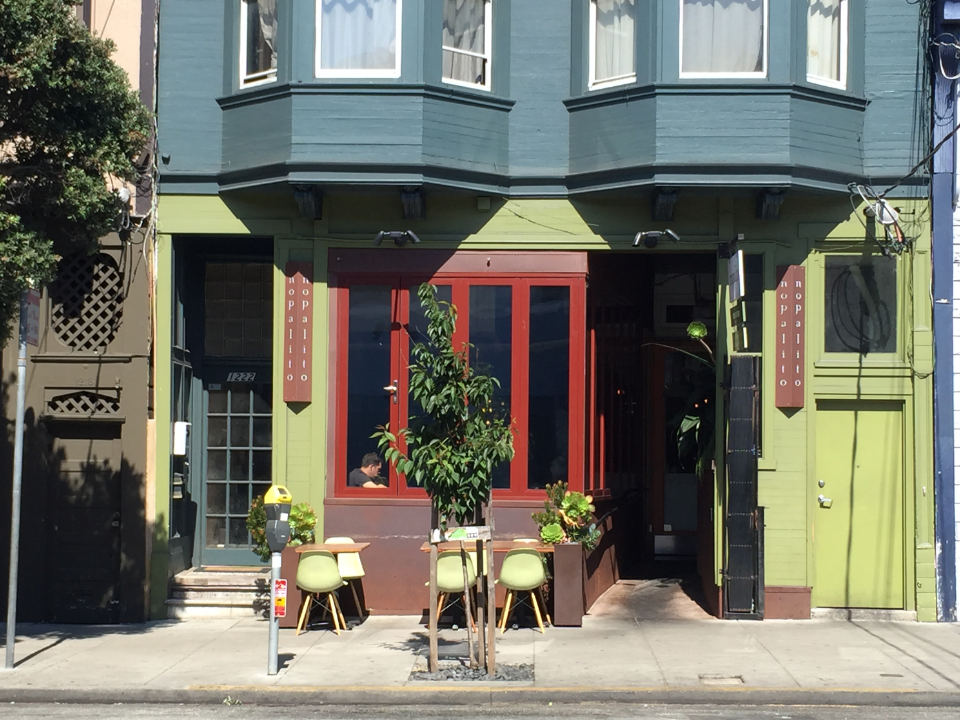 Switzer thinks the co-pay helps create a responsible mindset. “I've found that when people pay [$135], which doesn’t even cover [the tree's] cost, then they feel like they have a little ownership in it.”

If you’re a renter who wants a tree, you can identify yourself as the tree's caretaker and fill out the downloadable forms—but you’ll also have to get your building’s owner to sign them. Owners can also fill out and sign forms electronically.

The Inner Sunset ranks fairly high on canopy coverage relative to other neighborhoods, at 20.5 percent.  (The highest, after Golden Gate Park and the Presidio, is Seacliff, with 29.3 percent coverage.) Still, lots of eligible space remains. Carlson mentioned the nearby Outer Sunset is among the least-covered neighborhoods, at 5 percent. He attributes the lack of trees to the more challenging climate and soil, a preference for parking spots, and cultural resistance from much of the neighborhood's sizable Asian population, due to the perception that trees can be bad feng shui.

The volunteer list for FUF's August 1st Inner Sunset planting is already full, but alternatives abound if you want to get your hands dirty.  Volunteer opportunities around the city include plantings, tree-care outings, advocacy, and neighborhood outreach. 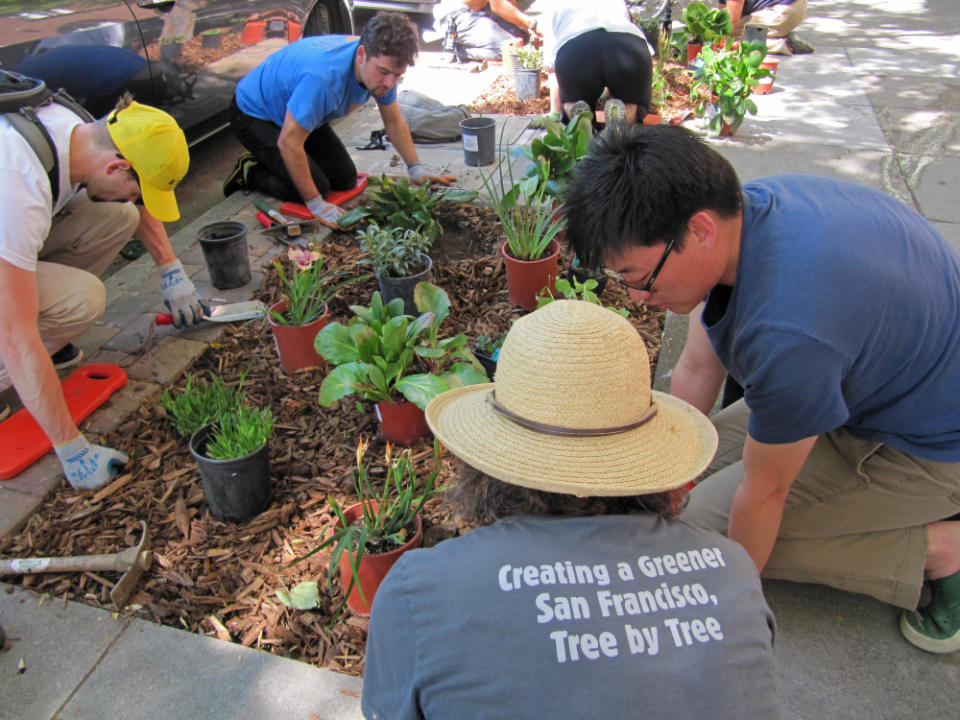 Photo: Friends of the Urban Forest/Flickr

After each planting, volunteers and FUF staff meet for a picnic, often at one of the property owners' homes. “We make a tree planting easy, we make it affordable, and we make it fun,” Carlson said. “We talk about how important it is to having a sense of community, when you meet up with your neighbors and plant trees in your neighborhood."