[Editor's note: An app called Link-SF launched in February of 2014 to help homeless people more easily find nearby services. It was an unusual collaboration between a nonprofit and a tech company.  Tenderloin-based St. Anthony Foundation came up with the concept, the content, and the outreach, while customer support software maker Zendesk provided the engineering.

Tenderloin newspaper Central City Extra checks in to see how the app is going, in this article below republished with permission from its August issue (PDF).]

Zendesk has created a mobile app for homeless and the low income to find shelter, food, medical care, a shower and public access to a computer—234 services in all, from multiples like Glide’s food, rehab and housing programs to a weekly food pantry for Tenderloin residents administered by Korean American Senior Service.

The app even gives them distance and directions how to get to what they need from wherever they are in the city. And they don’t need an iPhone. Any under-$50 smartphone will do.

The app — Link-SF — connects more people to more help than ever. It could even increase the cost-effectiveness of resources like shelters because the app tells which location has how many beds available,achieving a more even distribution of services. People can know where they can get a bed without trudging from place to place and to find out ahead of time how to register and apply for waitlists. 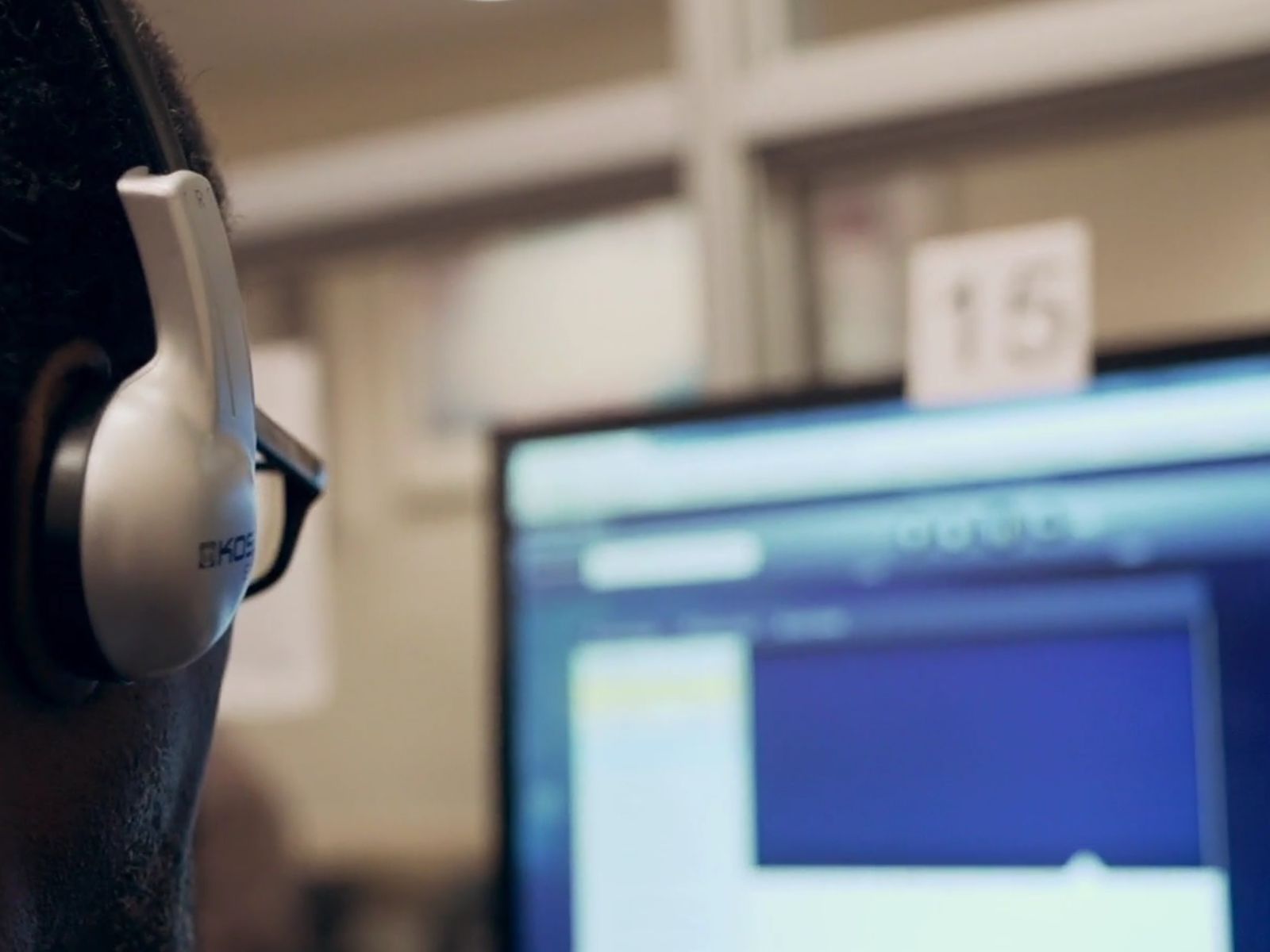 The success of the app— 2,700 site visits each month and growing — is also seen in the increasing demand for St. Anthony Foundation’s Tech Lab services. Last year, 100 people a day visited the lab — 36,000 visits — and that number is expected to reach 50,000 this year, according to Jessie Brierley, the Foundation’s communications associate. Along with increased visits, the lab is seeing changes in how people access the Internet.

St. Anthony’s recognized that with such changes, its clients would benefit from having city agencies, nonprofits and charities’ human services online in one all-inclusive site.

Zendesk engineers stepped up. They could build a Website to do that, they said,but better yet, why not also make it mobile-friendly — an app — so people could access service information directly from their hand-helds? If the need is critical and the resources potentially life-saving, access shouldn’t be limited only to the hours when publicly owned computers are available.

Before tackling the mobile app, Zendesk software engineers, led by Kenshiro Nakagawa, canvassed the Metro PCS store at Mason and Market streets to check out the neighborhood’s hottest-selling handhelds,not the most sophisticated and expensive. 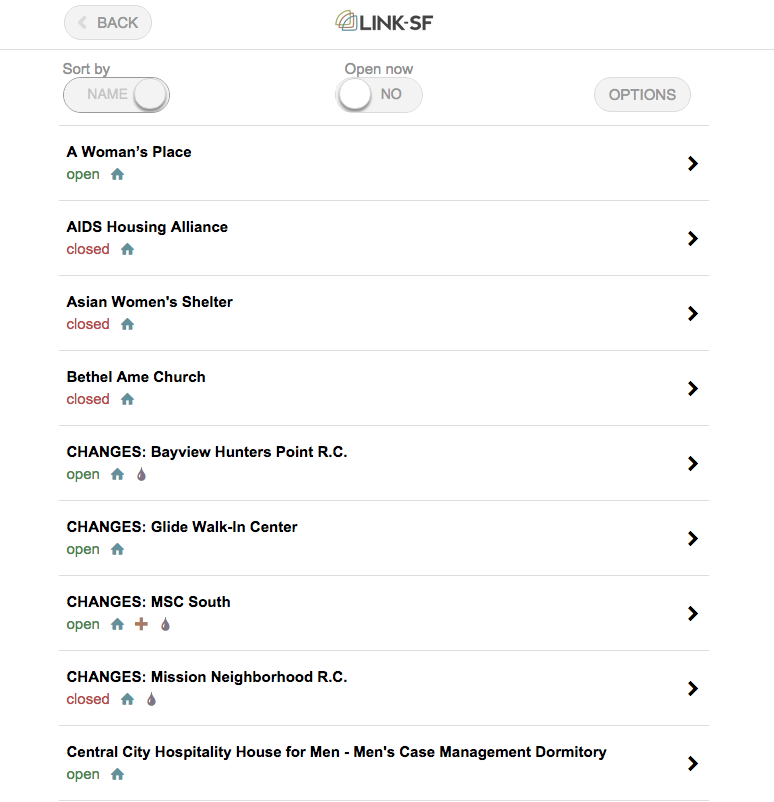 The engineers worked a year to create the app’s underpinnings — the open-source code — so that it would work with most new smartphones, the basic under-$50 models that lack elaborate bells and whistles but still provide Web access. Sprint Tribute, Nokia X3-02 and Blackberry Curve fit the bill, as do various Cricket, T-Mobile and Metro PCS models. Score a used smartphone and you’re mobile for next to nothing.

For the data about shelters, addresses,hours and bed counts, and the other uncounted bits of information, the minutiae that harbor the nuts and bolts of every service available through the app,Zendesk and St. Anthony turned to the Homeless Advocacy Project, which long has published a manual of services for homeless and low-income people.

HAP, funded by the San Francisco Bar Association, offers the homeless and low-income legal advice, advocacy and services information, and for 25 years has published a now-$15 manual of essential services citywide. St. Anthony’s used the manual to build the basic information for Link-SF, paring the print material to create a clear, user-friendly site complete with Google maps and adding features that allow quick links to service providers.

If you need to shower at Lava Mae, for instance, link through to its website to find the daily schedule and whereabouts of the shower bus.

“The work that the engineers at Zendesk put into the creation of Link-SF would have cost us hundreds of thousands of dollars,” said Karl Robillard, senior manager of St. Anthony Foundation.Instead, Zendesk provided the expertise without charge as part of the community benefit agreement it negotiated with the city in exchange for the Twitter payroll tax breaks.

In giving back to the neighborhood, Zendesk has led the way, showing other tech firms how to do it right, including having a healthy respect for people they are supposed to help. 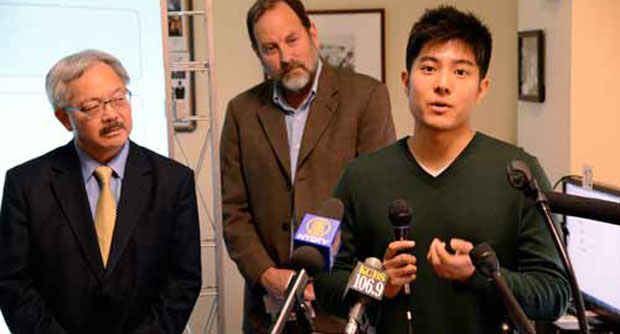 Zendesk's Nagakawa discussing the app at the launch press conference in 2014. Photo via St. Anthony's Foundation.

Kimberly McCollister, an independent website designer and UX (user experience expert) worked on Link-SF for nine months during its development, mostly as a volunteer. Testing a handful of Tenderloin residents at the Tech Lab, she told The Extra, she found that changing colors, enlarging fonts and fashioning link “buttons” made things much easier for less experienced and elderly computer users.And so they were incorporated into Link-SF.

A Link-SF search for medical care quickly directs users to 134 facilities from S.F. General to St. James Infirmary with full descriptions of available services and hours of operation. Navigating the site is easy and the links to providers are direct and fast.

“Link-SF is a great contribution to people,” McCollister said. “I hope more caregivers and service providers become aware of it. They could use the site to help their clients.”

The open source code that Link-SF uses is available for any tech entrepreneur. Impressed with Link-SF’s quality and technical sophistication, the Queens Public Library adopted the code and put up a Website of social services in the New York City neighborhoods served by its 68 branches.

“We’re only interested in how many people visit the site, what type of device they use to access the site, and how long they stay on site,” said Megan Trotter, Tenderloin Tech Lab program manager for three years, now Zendesk community program manager. The data will be crucial in creating future versions of Link-SF, Trotter said.

Of Link-SF’s 2,700 visitors a month, nearly 25% are from outside San Francisco, according to Trotter. More than 350 are repeats. Last January’s biennial count pegged the city’s homeless population at 6,686. 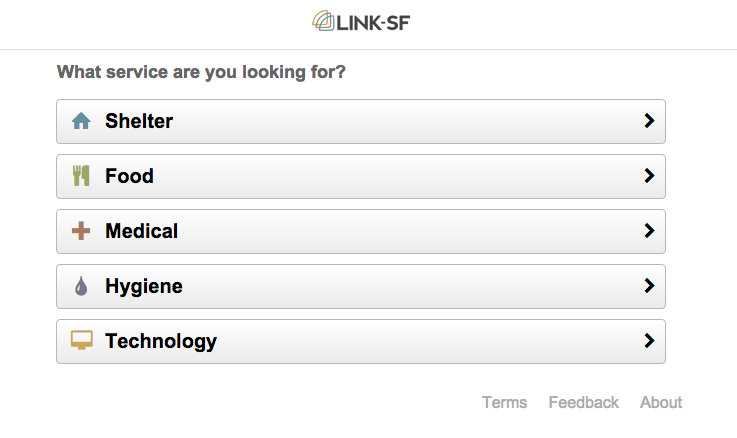 St. Anthony’s is finding that the cost to maintain Link-SF and conduct scheduled updates on its own is still within the agency’s means.

Julie Berlin, the Lab’s manager, handles the site’s upgrades and corrections, often brought to her attention by site users and St. Anthony staff, as well as the service providers themselves. She credits Zendesk with building an “extremely user-friendly database update platform.”

“I am able to do it now. Zendesk is a remarkable, constant partner. I know I can call on them, if problems arise,” Berlin said. According to Trotter, Zendesk engineers who developed Link-SF meet weekly and they’ll step in, if technical glitches pop up that St. Anthony’s can’t handle.

HAP tries to update its resource manual every two years, according to Julie Rosenthal, director of services at the S.F. Bar’s Justice & Diversity Center,which oversees HAP. When major overhaul of Link-SF is needed, St. Anthony’s will have to return to the Zendesk experts to build a bigger, faster and more complete site and to make access to the information available for a new wave of hand-helds and computers.

“We’ve shown what’s possible to achieve, what can happen when people work together,” Robillard said. “When the next generation of new equipment comes into wider use, we’ll be inviting our tech neighbors to help us again.”

Aside from the mechanical aspects of equipment and the need for compatible portals and platforms, Berlin notes the larger question lies in how society recognizes and uses tech-based responses to poverty.

“I go to community meetings and I tout Link-SF.,” Berlin said. “It is the default opening website on all the Lab’s computers and prominently mentioned in our Lab brochures. Case managers and service providers need to be aware of how the site can help people and how it can market their services. In the future,as we all get more tech-savvy, site navigation will be more sophisticated and open referral networks and individual portals will be answering people’s needs.”

San FranciscoTenderloinMid-Market
About 2 hours ago