On Monday night, the Sunset Heights Association of Responsible Persons (SHARP) hosted a forum on the planned Kirkham Heights redevelopment project, near Fifth Avenue and Kirkham. Representatives of the site's owners gave a detailed presentation to the standing-room-only crowd, addressing audience questions and concerns about the project's potential impact on the community.

Westlake Urban has owned the 6.35-acre rental property for 40 years, and hopes to redevelop the site to boost density and potentially create a mix of rental and privately-owned housing. As they gather data for the environmental review process, the site's owners have hired project-development management firm Transform Urban to reach out to neighbors and share information about their plans. 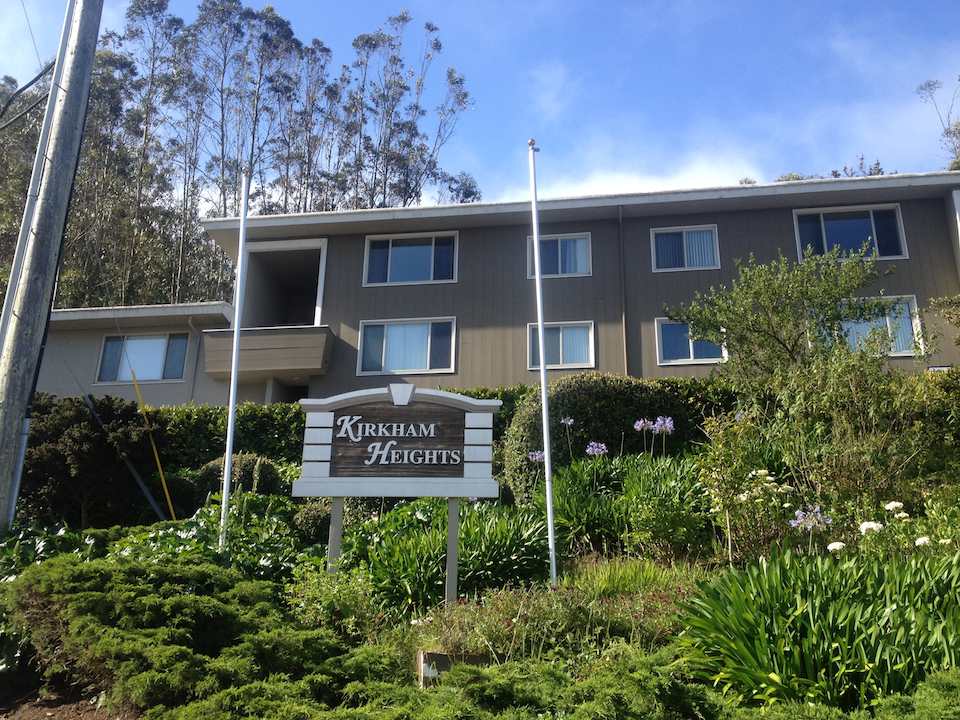 Built on a steep slope on the western edge of Mt. Sutro, Kirkham Heights currently has 86 units of housing. If the plan is approved, that will increase to 460 units, with 86 held over as rent-controlled for existing tenants. As they move out, their units will be offered at market rate; developers will also set aside 12 percent of units for below-market-rate housing.

When it was built in 1950, Kirkham Heights was zoned for as many as 690 units, but developers have no plans to max that number out. If the Board of Supervisors approves a pending proposal to boost density by relaxing height limits, Naomi Porat of Transform Urban said developers might seek to build up to six stories, instead of four.

"We’ve received significant positive feedback from neighbors during our community-wide meet and greets, through our project website, and in social media," Porat told Hoodline. "We have also heard positive feedback from Kirkham Heights residents about our intent to provide new rent-controlled units for all current tenants, at rates comparable to their current rents as of the time of relocation." 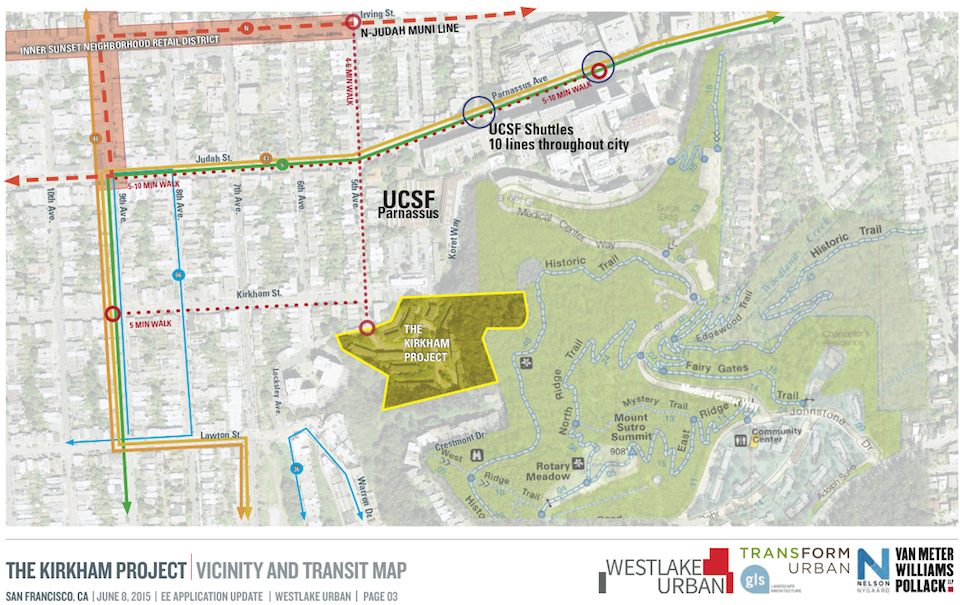 But there's also some opposition. To register their concerns about the project, several Kirkham Heights residents and neighbors have joined the Inner Sunset Neighbors Association. ISNA member Maria Wabl said that redeveloping the site at the proposed scale will create too much density, as well as a massive, long-term construction site in the middle of a quiet neighborhood.

"They're taking out 80,000 cubic yards of soil," said Wabl. "Without removing building material, that's about 8,000 trips made by dump trucks." (ISNA estimates that developers would excavate enough material to cover the length of a football field 60 feet deep, but Porat said the number is lower.) "Then there's air pollution, construction time, the vibration of rods they'll pound for new foundations ... the cumulative impact will be enormous."

If the infill project is approved, it will be one of several initiatives to boost housing density in the Inner Sunset. Over the next few years, UCSF will construct new buildings and student/faculty housing, and in April 2016, crews will break ground on SF Overlook, 29 new townhomes set on the hillside above Kirkham Heights. "We're losing a neighborhood," said Wabl. "The green side of Mt. Sutro has been a landmark; why not refurbish these buildings? It'd be much more environmentally friendly if they just built more in between."

To shorten construction time and reduce costs, Porat said developers may truck in pre-fabricated pieces that will be assembled on-site. But Joel Koppel, a representative of the city's electrical construction industry, argues that prefab homes "are not sustainable for San Francisco’s local construction community. They do not utilize local business enterprises, they outsource jobs that would go to SF residents, and they add nothing to the local economy.” 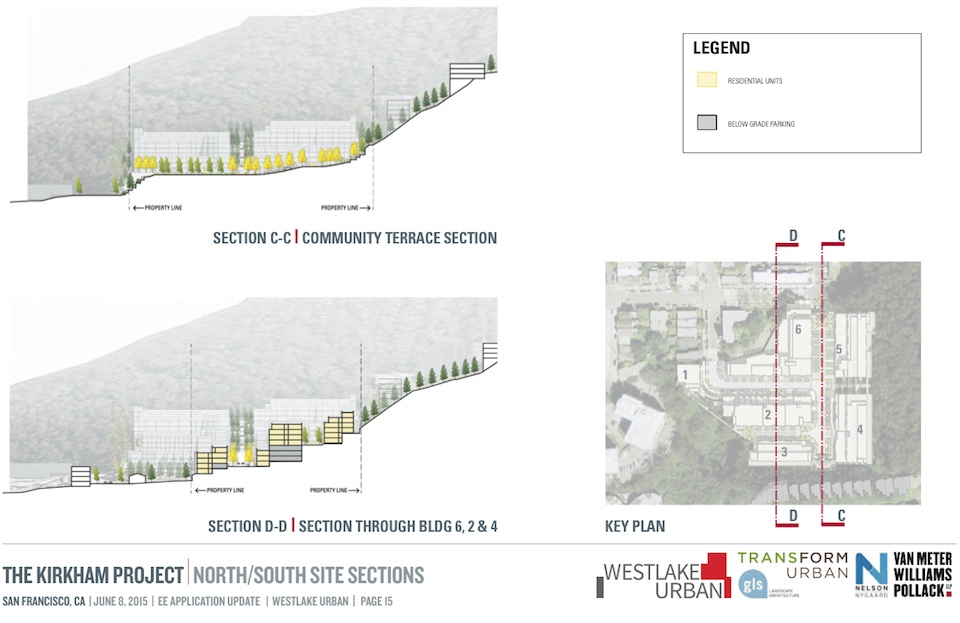 "I think the progress is over scale. It's massive," said ISNA member Denis Mosgofian, a 42-year Inner Sunset resident. "It increases the density of the project 530 percent from its current density, and there's a tremendous lack of affordability." Mosgofian also thinks that Westlake Urban can afford to boost the percentage of affordable housing from 12 percent to 40 percent. "This outfit doesn't even have land costs, because they've owned the land for 40 years," he said.

Porat said the redevelopment would create one new parking space for every two units, as car ownership is rapidly declining among urban dwellers. "We're also planning for the future," said project architect Karen Murray. "We're offering alternatives to needing a car, like using a concierge service to deliver your food," along with ride-sharing, bicycle storage, scooters and electric bicycles.

Porat agreed: "I think we're at an inflection point right now as far as car ownership, and as planners, we're planning for 50 and 100 years in the future."

For their part, Wabl and Mosgofian said they don't believe 230 parking units will be enough to serve the proposed community. Parking is already congested in the area, and because Kirkham Heights lies outside the Area J residential parking zone, tenants would be limited to two-hour parking during daylight hours. Porat said her team supports extending these restrictions into the night, "to ensure that our proposed low parking ratio does not impact neighborhood on-street parking."

"They're going to create density in a few new blocks like we have in other parts of the city," said Wabl. "I didn't move downtown, I came to the Inner Sunset. I think we have to inform more people about what this means for our neighborhood."