At Acrimonious Meeting, SFMTA's Plans For L-Taraval Met With Boos

The latest battle in the war for the future of the L-Taraval took place last Wednesday, when SFMTA officials unveiled their updated plans for the line at Dianne Feinstein Elementary.

After a welcome from Supervisor Katy Tang, who emphasized that officials were there to listen, Muni Forward program manager Sean Kennedy walked the audience through the new plans for the corridor. But the presentation pitted Kennedy against a disruptive crowd, who frequently interrupted, booed, and shouted comments during the presentation. 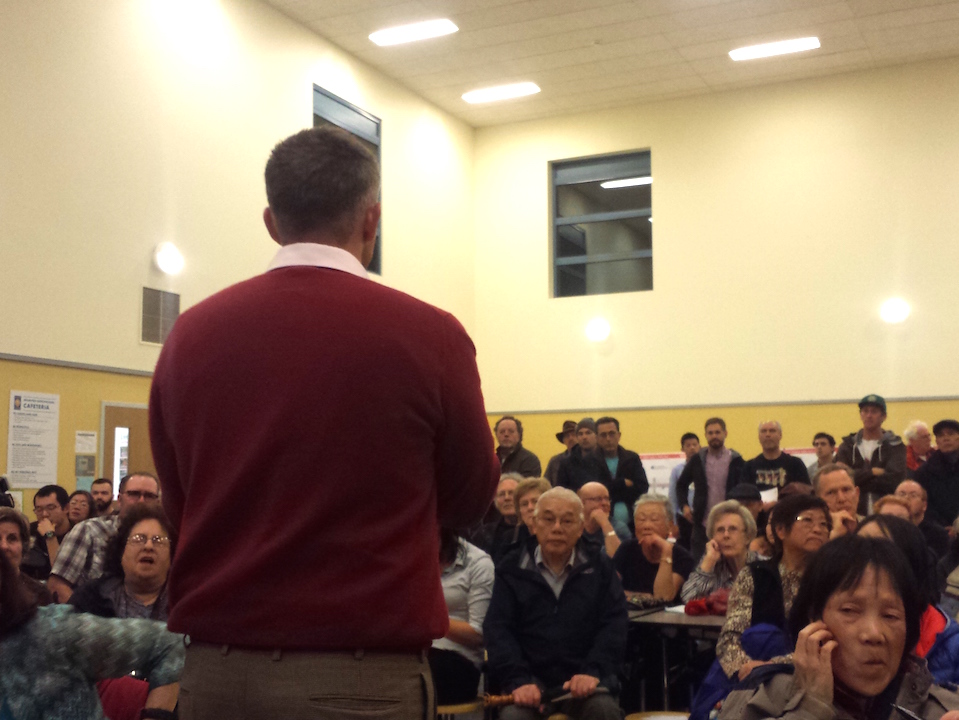 The SFMTA’s efforts on the L-Taraval focus on improving pedestrian safety under the city's Vision Zero program. Because the light rail shares the road with cars, passengers face dangers when they enter and exit trains, and many have complained of being almost run over by drivers who are unaware that the law prohibits driving past a stopped Muni train. Police enforcement of the law is rare.

As a result, the city has designated the L-Taraval as a high-injury corridor, with 22 people hit while entering and exiting trains over the last five years. In total, the corridor has had 46 pedestrian collisions.

The SFMTA is aiming to enact new safety measures on the route with the consolidation and removal of stops, the construction of boarding islands, and the creation of transit-only lanes.

But some residents have vigorously campaigned against those proposals, contending that they would remove parking spots and accessibility for senior citizens. Earlier this week, opponents of the plan taped flyers on Muni stops targeted for removal, warning riders that their stop would be taken away. Other residents have received the flyers in their mailboxes, often at late hours. 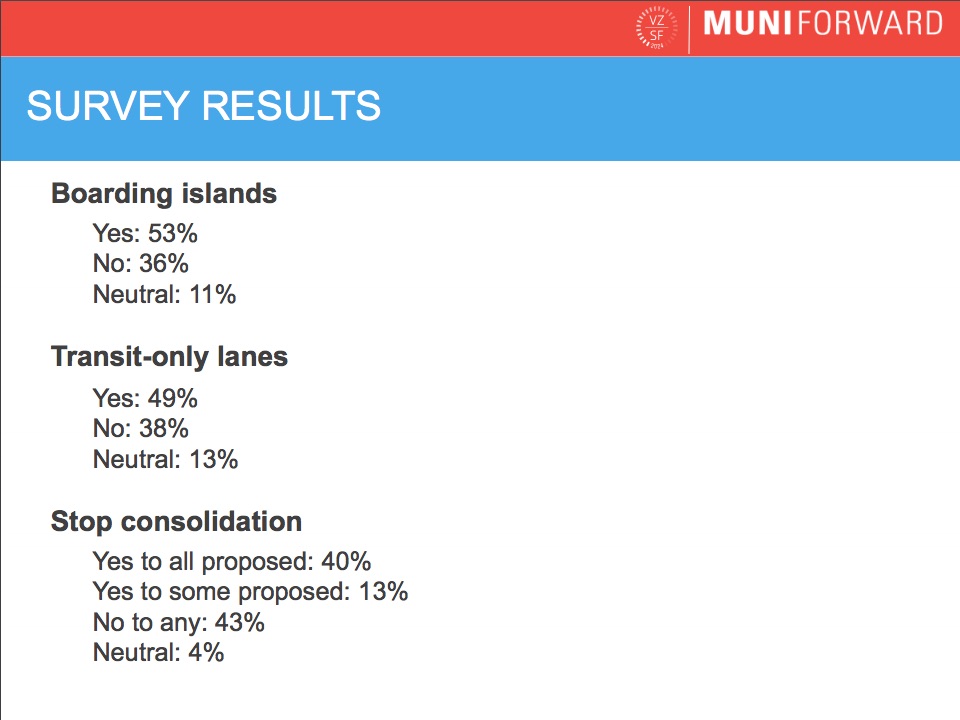 In response to that community feedback, the new plans would restore the following stops: 35th Avenue (inbound only), 44th Avenue, and 46th Avenue and Ulloa St. Additional ramps would also be constructed at the outbound stop at 28th Avenue and the inbound stop at 30th Avenue. 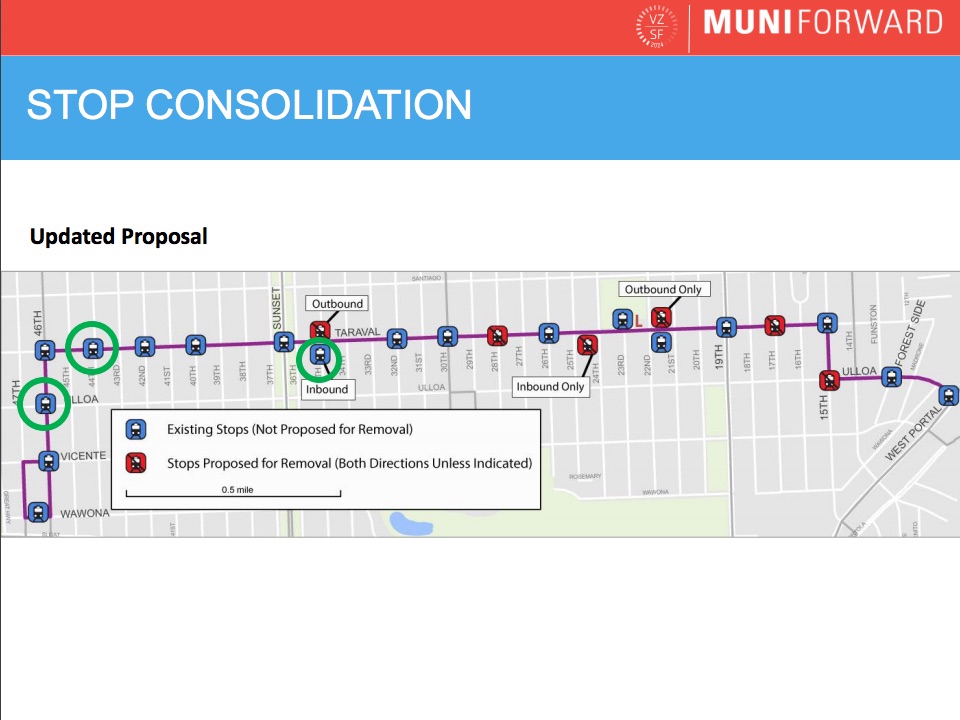 Instead of building boarding islands, the current plan is to conduct a pilot for painted boarding areas at various stops along the corridor. The criteria for the success of the painted areas would include the percentage of drivers who follow the law by stopping, and the number boarding-related crashes at pilot sites. If the pilot is not successful, boarding islands would be built in place of the painted lines. 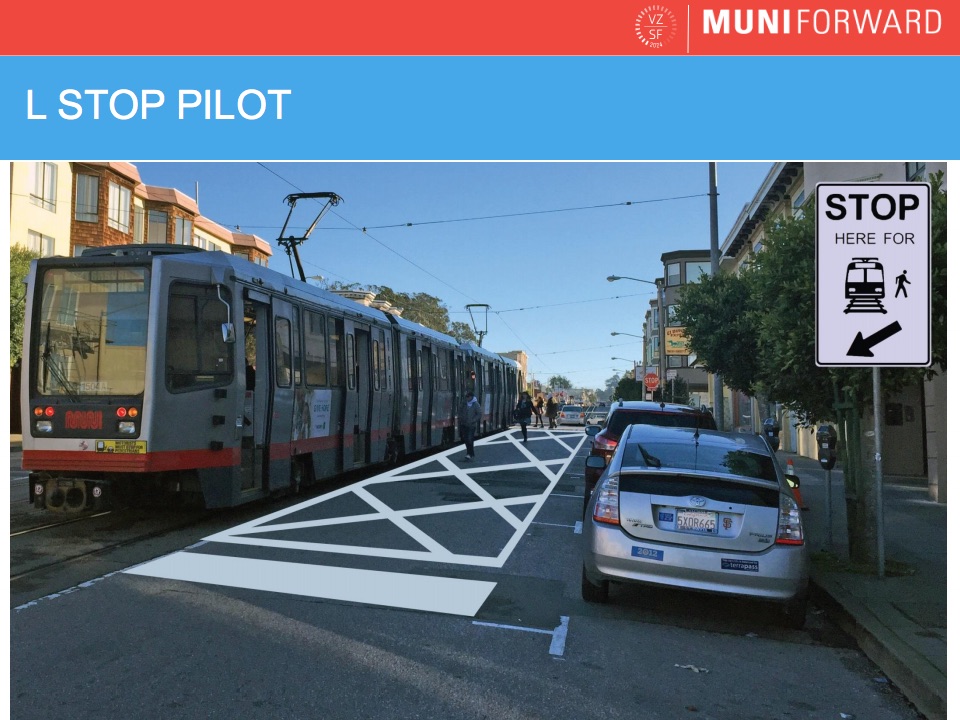 The meeting was acrimonious, with the crowd, aggravated by SFMTA’s lack of microphones in the high-ceilinged space, offering vocal opposition. Two local residents, Albert Chau of Great Wall Hardware and Paula Katz, have spearheaded a petition against the removal of stops and parking spaces, which they have presented at previous community meetings. At this meeting, they claimed to have nearly 2,000 signatures against the proposals.

The audience also questioned the frequently cited statistics around pedestrian safety. When Kennedy pointed out that at “every intersection, people are getting hit,” one resident shouted, “Those figures don’t seem to be that high!”

Another merchant questioned if SFMTA had conducted an economic impact survey on the merchants whose businesses line Taraval Street. “We have not,” responded Kennedy, to the loud disapproval of the audience. 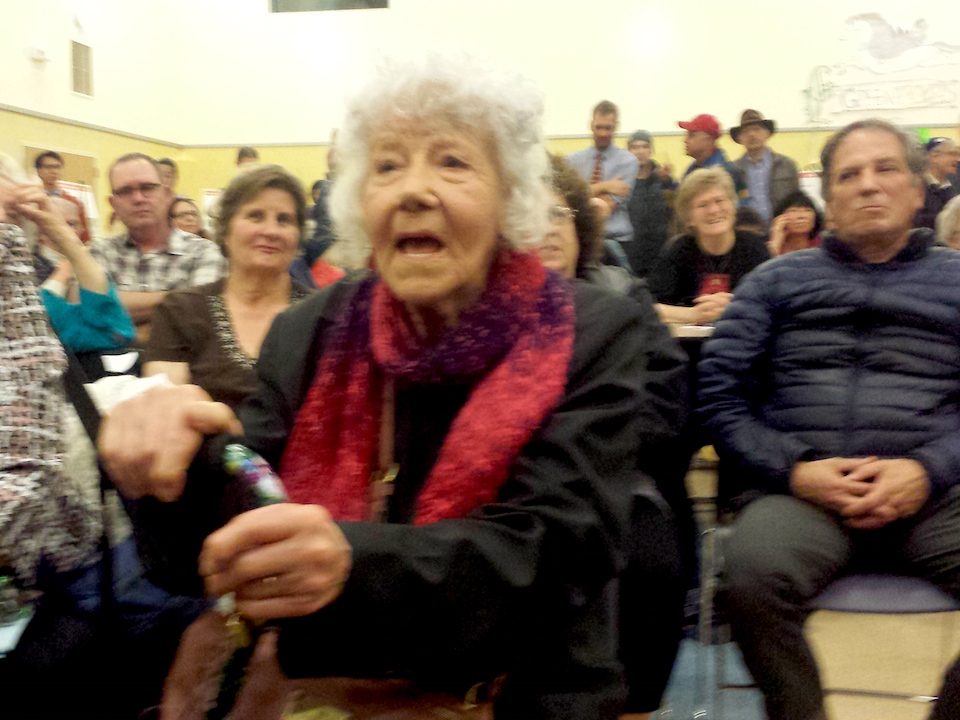 Mary, a 102-year-old resident of the Sunset who spoke out against stop removals. (Photo: Fiona Lee/Hoodline)

Towards the end of the meeting, a few locals spoke in favor of the SFMTA’s proposed changes. Leslie Clark, who uses a wheelchair and is a member of the Muni Accessibility Advisory Committee, pointed out that boarding ramps the islands would provide are a priority for the disabled.

May, who declined to give her surname, is another disabled user of the L-Taraval. Though she does not support the removal of stops, she said she was strongly in favor of boarding islands. "Just on the way here, I was almost hit. I stuck out my cane ... Instead of waiting for statistics, are you waiting for someone to die?”

Her statement was interrupted by others in the crowd, who groaned and protested her comment.

At the meeting's end, one neighbor pointed out the costs of inaction with regards to safety. “I heard a lot of stuff about ‘my’ parking and ‘my’ streets,” said Janelle Wong, who has lived in the area for 10 years and has children who go to school in West Portal. “It scares me that we don’t see safety as a primary thing, as a community. We will all eventually bear the cost of someone getting hurt, of someone dying in our streets.”

Kennedy's presentation, with the updated plans for the L-Taraval, is available at the SFMTA’s website.
San FranciscoOuter SunsetParkside
35 minutes ago