A Conversation With Pete Mulvilhill Of Green Apple Books

Back in 1967, a man named Rich Savoy had just finished a stint in the Army and a short tenure as a radio technician for United Airlines. But what he really wanted to do was open a used book and magazine store—a dream he realized when he founded Green Apple Books on Clement Street. Over the years, the store has expanded as surrounding units became available, and today it proudly stands as a massive destination for SF bookworms.

Savoy is no longer a part of the business, having sold it off to three employees, Kevin Ryan, Kevin Hunsanger, and Pete Mulvilhill, over a ten-year period. It's a process admired by many in the small business community as a paragon of how to keep a historic shop running.

We caught up with Mulvilhill in a tiny upstairs corner of the store to chat a bit about "succession planning," the importance of a good bookstore, and what it means to advocate for the survival of independent merchants in San Francisco. 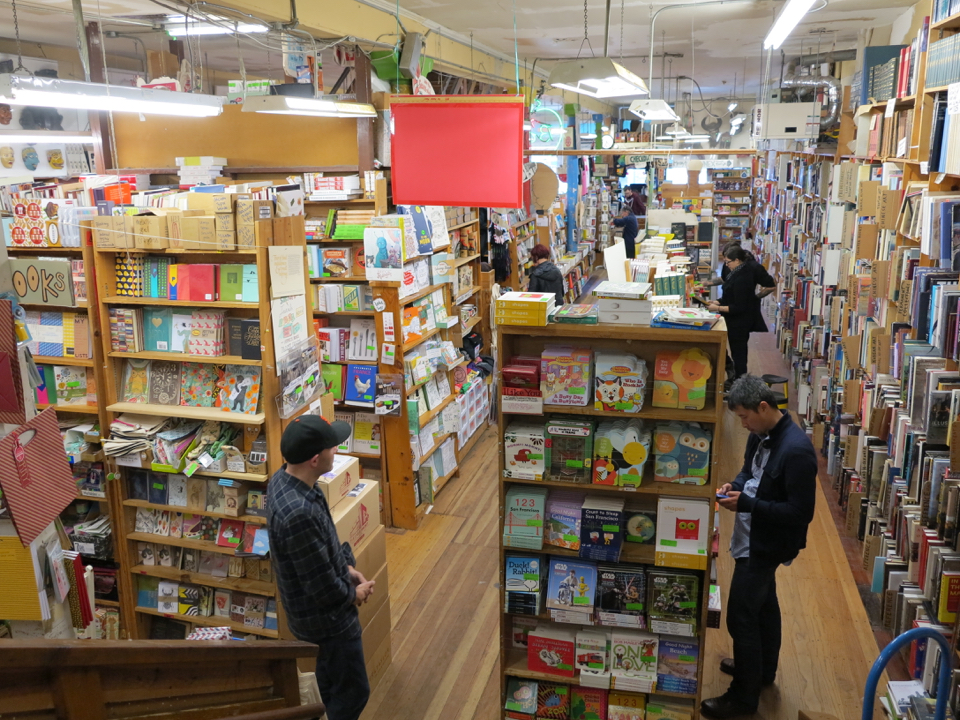 I am from Bethesda, Maryland—D.C. suburbs. I moved here right after college because I didn't want to live in D.C., but I wanted to be in a city with good culture and nature.

Tell us about some of the events that led to you working here.

I moved here right after college. I was hoping to be in journalism, but I was under-qualified. It was 1993, a rough patch for the economy, so I took temp jobs. Eventually, a temp agency placed me here in this very nook where we are now. When I started, 22 years ago, this used to be the bookkeeper's office.

The store had just had its 25th anniversary, and they'd had a bunch of events to celebrate it, and the bookkeeper was kind of running that. So he was behind in his bookkeeping, and I was just doing office-y things for a couple weeks. Then he liked me, thought I was doing well, and recommended me to the owner, Rich Savoy.

So then I worked in the receiving room for six months. Things developed and I got promoted, then eventually, me and two other guys bought the store from the original owner. 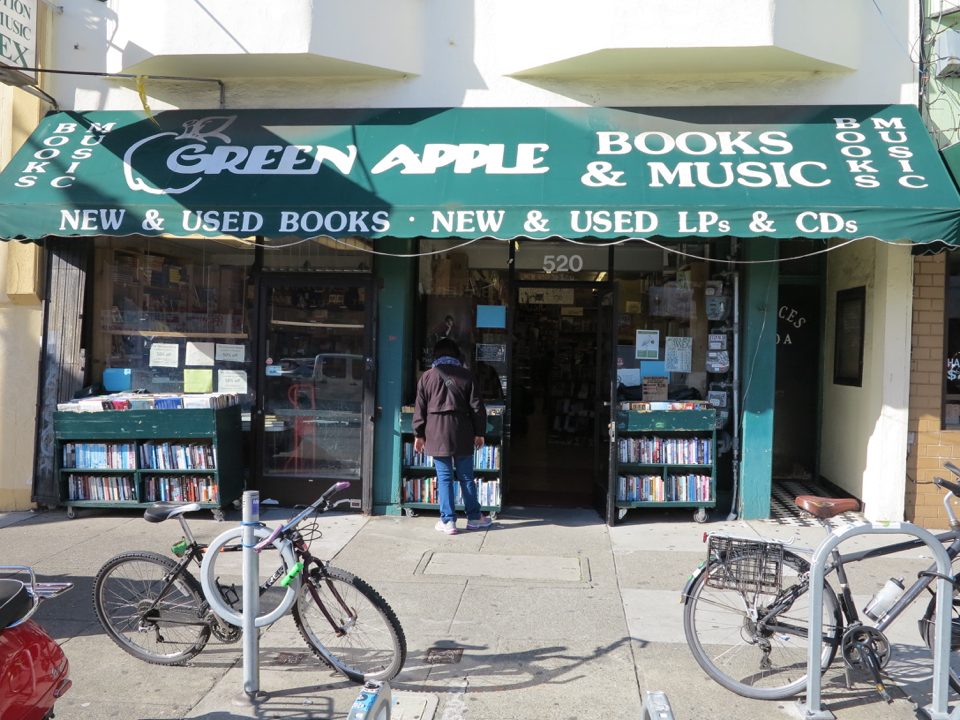 Tell us about the process of transferring the ownership of the business. It sounds like a good example of how legacy businesses can work in San Francisco.

Yeah, and actually we've given quite a few talks about this. It's called "succession planning," when a business owner is getting older and wants to sell the business or move on. Bookstores, in particular, are very investment-heavy.

It takes a lot of cash to open a bookstore and just get the inventory—for example, 100,000 books. Especially new books, if you think of them as $10 or $12 each at cost, you're talking about a million dollars worth of inventory. Most people who have a million dollars would get a better return on it doing almost anything else. A lot of stores don't successfully sell because it's very expensive, and obviously the fixtures and the brand name are worth something.

The owner knew that he couldn't just sell the store and get a couple million dollars for it, which is what it was worth. He also owns the building, and he wanted to make sure whoever bought the store from him would keep it going for a long, long time. 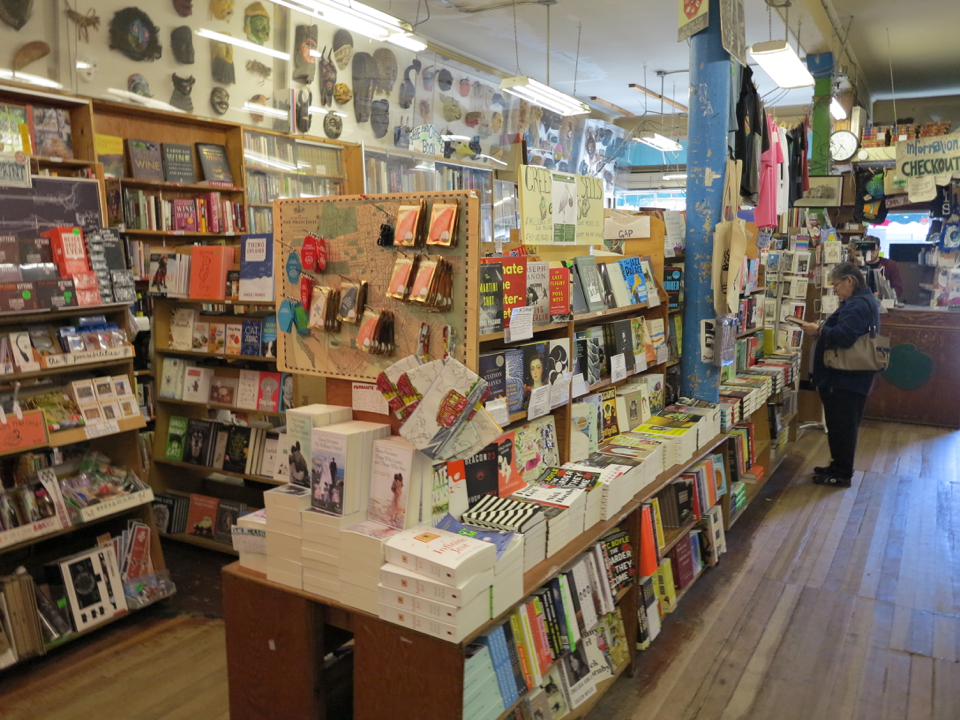 So he assembled a team of three booksellers who worked for him—myself and two other guys—and worked with us for a couple years while we negotiated the price, learned more from him, worked out legal agreements and those kinds of things. Then we had a 10-year buyout. Every year, we would give him a chunk of money, and buy more shares of the store.

He had more or less stopped working a year or two into that, so he got 10 years' worth of solid income and he got a tenant that pays him a good rent. So for him, it was a win-win. We also had benchmarks, so if we failed or screwed up somehow, he'd be able to reclaim the store.

And when did this occur?

Let's see, the 10-year buyout officially ended around 2008, so it started officially around 1998. But it started unofficially a year or two before then. He's still our landlord, so we send him a check once a month, but he's not otherwise involved in any way. 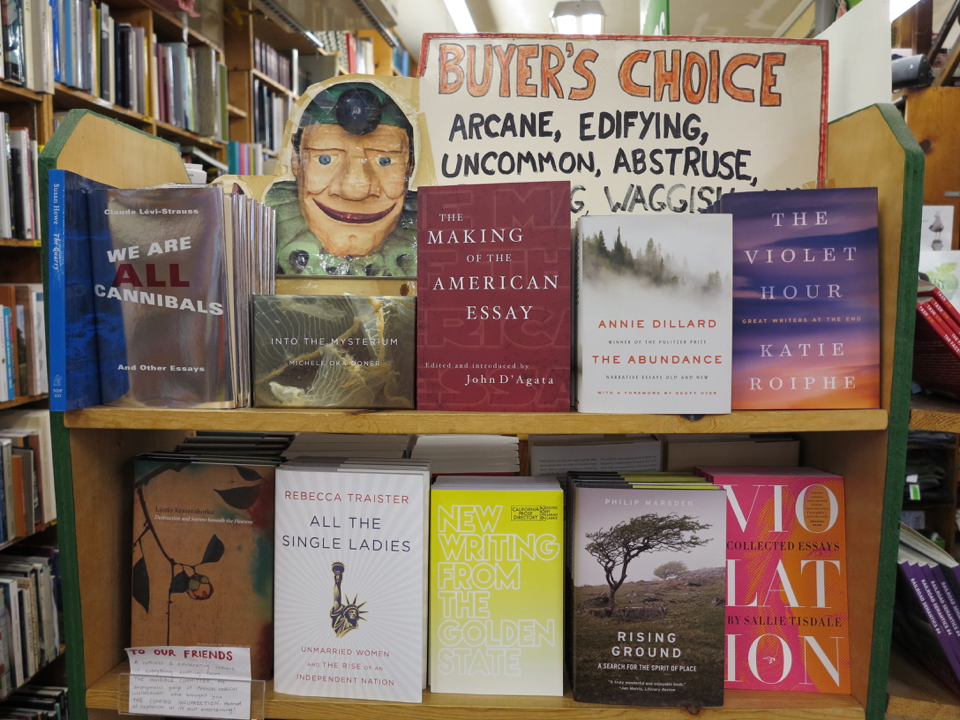 What sets Green Apple apart from other bookstores? Why is it so special? 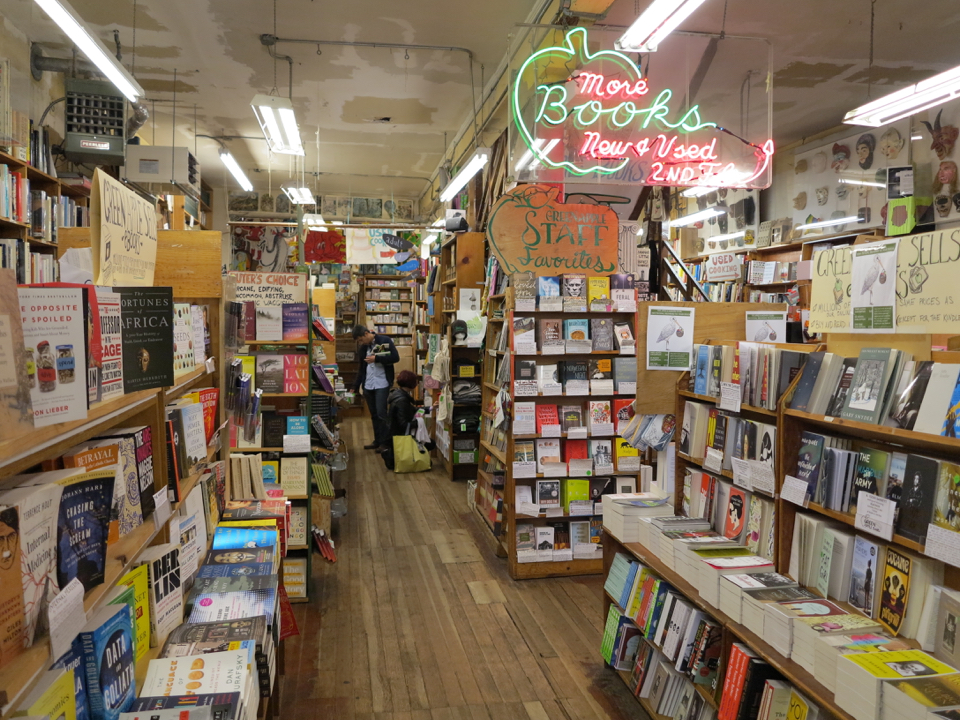 What do you think makes that difference to people?

I think it also has to do with the fact that people can browse, instead of searching the way they do on Amazon. They can discover things they wouldn't otherwise discover on Amazon. I also think there's beauty in the store, both in the physical books and in the shelves and the worn floors. There's a sense of community, especially in our 9th Avenue store [in the Inner Sunset] that's doing all these events with a great literary community.

I also feel that people are getting that 'shop local' message, that if they don't shop at these local, independent stores, they'll go away. And they don't want them to go away. They don't want a city where Amazon just delivers whatever they need and they never get to leave the house. There's this concept of a "third place." There's home, then there's work, but there's gotta be a third place in the world. For some people it's the bar, for some people it's the gym or a yoga studio, and for some people, it's the bookstore.

Finally, all the people who work here contribute. There's 28 people who work here, and they all write these little shelf-talkers and they all help decide which books we carry. There's a guy who knows everything about LPs, so he has a killer LP selection. There's another person who knows magazines, so we have 700 magazines. All these people add up through their efforts and energies to create the store, and it really reflects back on the community, because we only buy what we think we can sell. Really, it's kind of a mirror to the customers, in a certain way. 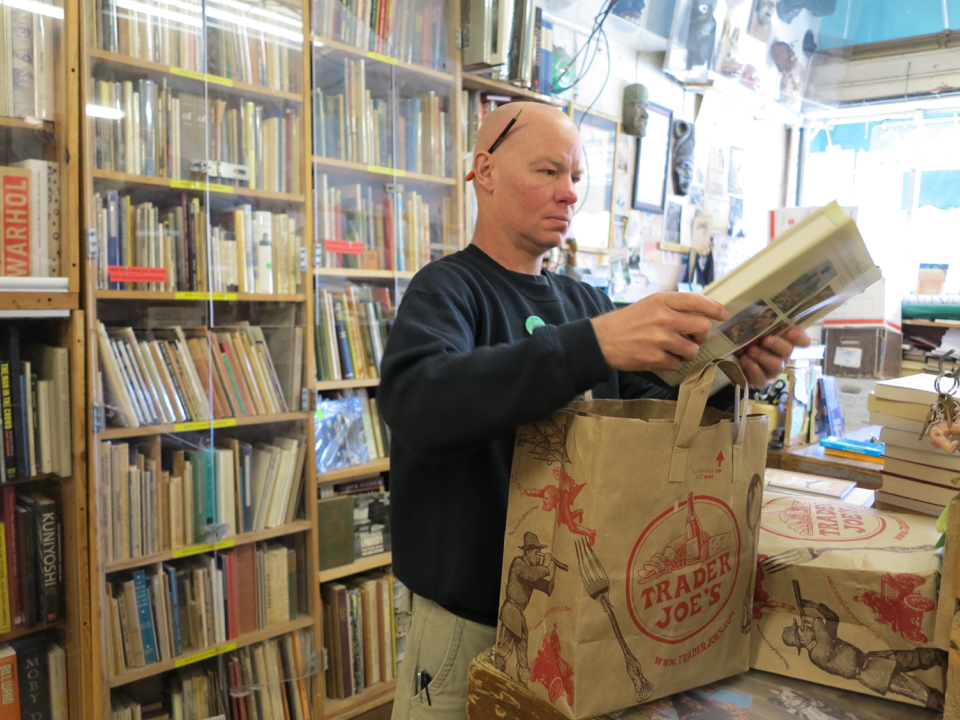 Employee "E.H." assesses the resale value of a parcel of used books.

What's in store for the future?

It's our 49th anniversary, so we're kind of scheming something up. Normally, you'd wait 'til the 50th, but it's San Francisco and there's the seven by seven = 49 thing, then the 1849 thing. So we think the 49th anniversary is notable in and of itself. We'll be doing a fun thing in early April, and we're planning more of an anniversary celebration in the fall. We are just now talking about what we're going to do. Then for the 50th, we'll do everything we can to just make it an epic party.

Finally, we have this little annex store that we had been using for calendars, but since calendars went away, we've been having this clearance sale over there. However, on April 1st, 3 Fish Studios is going to open a pop-up shop in that space for five or six months, through the summer. We're really excited to do that and partner with another independent business. We've never done anything like that before, but we're just continuously trying to adapt and build bridges. 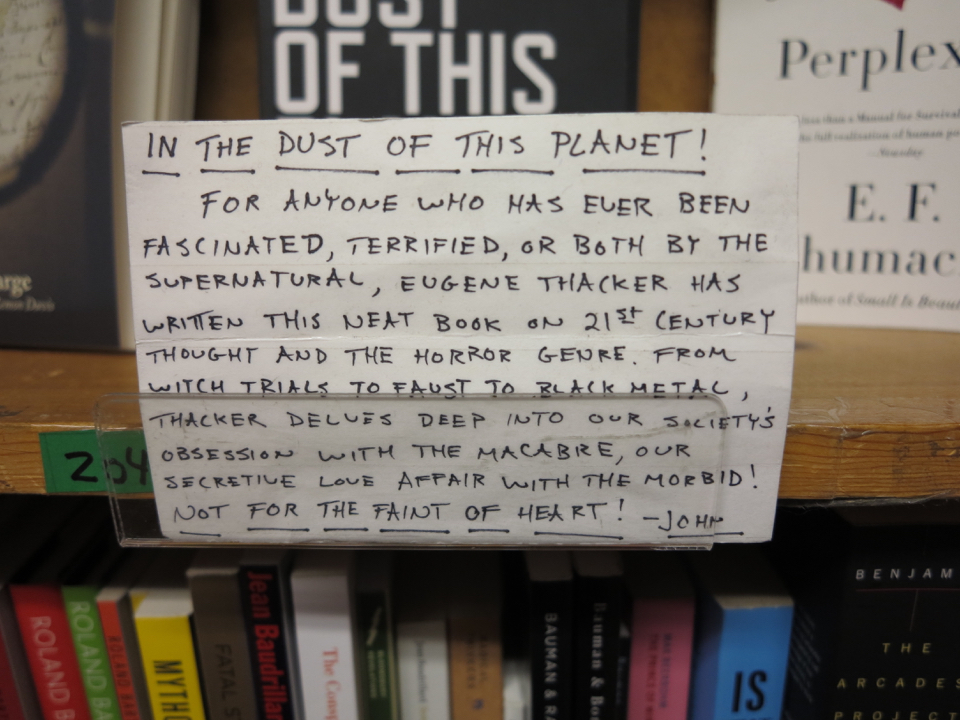