If an initiative backed by the mayor's office is successful, the streets of the Castro district could get a little cleaner over the next several months.

Similar to ones installed in SoMa last year, the cans are wrapped with the logo for the Castro/Upper Market Community Benefit District.

The "smart waste" trash cans are a part of an initiative from interim Mayor Mark Farrell's office that's bringing the devices to four new neighborhoods, of which the Castro is the first.

Bigbelly receptacles have been placed at five locations: two at Castro and Market, two more near Muni entrances at Church and Market, and another at Market and Noe near Fitness SF. 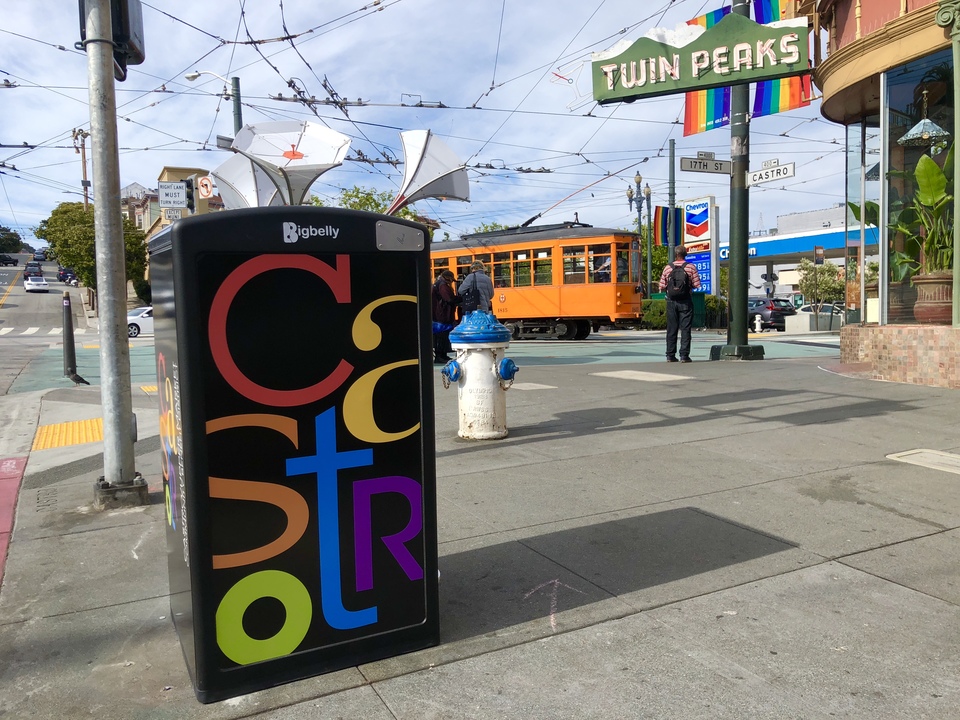 Andrea Aiello, executive director for the Castro CBD, said her group is "partnering with the city to get this done."

The neighborhood group has contracted with Bigbelly for the trash cans, "and the city will be reimbursing the CBD for our costs," she said.

The community benefit district signed a six-month contract with Bigbelly, which is headquartered outside Boston, but "it is anticipated that this will be a two-year program," said Aiello.

Castro CBD, Bigbelly, and the city will work together "to develop evaluation criteria" in order to determine how effective the new cans are at reducing sidewalk litter, she added.

According to district cleaning reports, the Castro CBD's street-cleaning team picked up nearly 70,000 pounds of trash and responded to 109 illegal dumping requests between July 2017 and February 2018.

"The Castro CBD board and I are excited about the city's new effort to work with the CBD to keep the Castro clean," Aiello said.

Unlike low-tech trash cans, Bigbelly devices are secured, so "once the trash is put inside the can, it doesn't come out and it avoids the unsightly look of an overflowing trash can," she said.

Aiello hopes the devices lead to cleaner sidewalks. "The trash doesn't overflow and then blow around, and people can't pull things out of the cans," she said.

Each trash can is topped with a solar-powered transmitter that sends a notification when the bin is ready to be emptied. As with other city trash cans, Recology will empty the Bigbelly bins.

Aiello said she's been in contact with the Union Square Business Improvement District and the Yerba Buena Community Benefit District about their use of high-tech cans.

"Both organizations are extremely happy with them and have noticed that the area around the cans are generally kept cleaner," she said.

Mayor Farrell is scheduled to hold a press conference tomorrow at Castro and Market streets in front of Soul Cycle at 11 a.m. to announce the program.