Renovations to the Jerry Garcia Amphitheater in McLaren Park are underway to make the site more accessible and improve facilities for concert performers and attendees alike.

The Greek-style outdoor concert venue was constructed in the 1970s, and named in honor of Grateful Dead lead guitarist and singer-songwriter Jerry Garcia in 2005. Garcia grew up nearby in the Excelsior District, and launched his music career in small venues around the Bay Area.

The venue in McLaren Park has been underutilized for most of its life, according to Linda Stark Liteheiser, one of the founders of Friends of the Jerry Garcia Amphitheater (AMP).

AMP led the charge to rename the amphitheater in Garcia’s honor, and also played a key role in identifying the priority renovations necessary to improve the space and make it more attractive to concert promoters.

The amphitheater’s annual Jerry Day was launched in 2003, and volunteers since then have gathered signatures on petitions to get additional city and grant funding to support and improve the venue, Liteheiser said.

Since the 1970s, the space has been retrofitted to meet the bare minimum of Americans with Disability Act (ADA) requirements, but there has been no dedicated city budget for planning or attracting events to the venue. The formal renaming received national media attention, but after the hype passed, the venue remained an unknown gem, Liteheiser said. Over the course of the next eight years, “it became evident where the areas for improvement are,” for the amphitheater, she said. First, McLaren is a relatively isolated park in terms of amenities, and by the time people get to the venue, they want food, drinks, and restrooms. Second, the venue needs the ability to sell tickets for some events, to help provide a revenue stream to support the free community events that are already so popular, such as the annual Jerry Day.

“There’s no such thing as a free concert,” Liteheiser said. 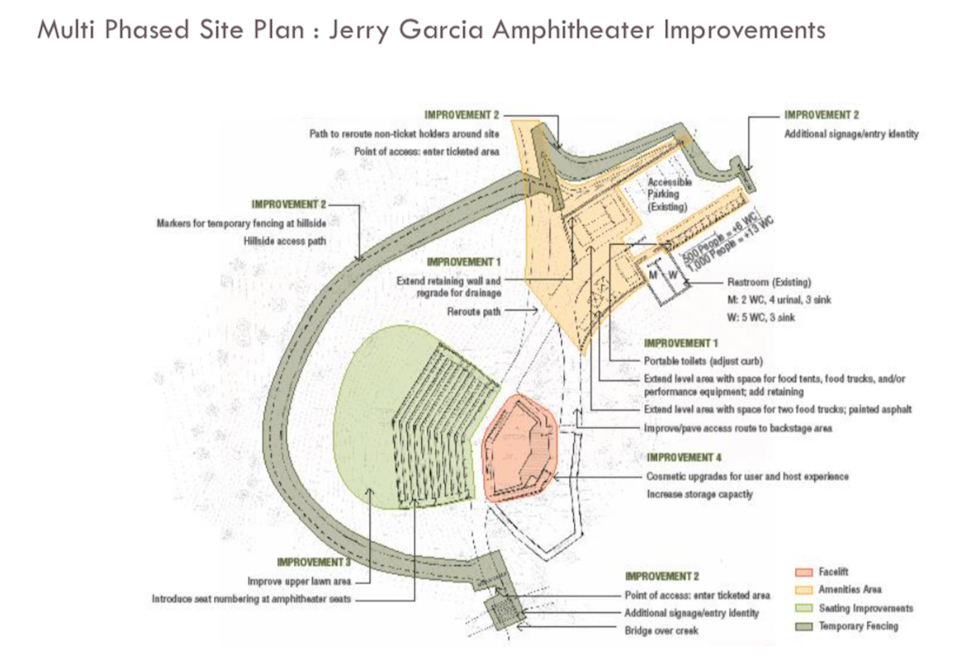 The amphitheater improvements were fleshed out in the 2018 McLaren Park Vision Plan, in which the San Francisco Recreation and Parks department (Rec and Park) built off and compiled years of community feedback and input. The Vision Plan included priority projects, including the amphitheater revamp and improving the group picnic facility, as well as adding new signage and access points to trails connecting to those two main focal points and improving the gateways into the park. Those ‘Tier One’ priority projects are fully funded, from a mix of sources including the 2012 Clean and Safe Neighborhood Parks Bond, grants, and other gifts, Rec and Park spokesperson Tamara Aparton told us.

The park saw some small-scale quick-build improvements before the Vision Plan was released, including a $250,000 project to pave the area in front of the amphitheater stage, adding some additional signage, and improving drainage in some areas, Aparton said.

Thanks to avid volunteers, the stage saw some additional acts in recent years, including SF Shakes, the SF Mime Troupe, and a curated concert series by Noise Pop. But the venue can only host 1,000-2,000 attendees, and the space doesn’t currently lend itself to ticketed concerts, since there are no clear entry and exit points.

The $1.5 million project launched this week may not result in many truly visible changes to the amphitheater, but the improvements will make the venue much more flexible, Liteheiser said.

All of the site’s existing ramps and accessible seating will be modified to be consistent with current ADA standards— with new handrails, improved ramps, and a new bridge over the creek — and the accessible parking area will be repaved and re-signed. New bike racks are being installed and the hardscape area near the existing bathrooms will be expanded to allow space for portable toilets, food trucks and tents, and concert equipment loading and unloading.

The stage itself and the green rooms beneath it will also get some improvements, including new paint and a fully paved ramp between the loading zone and the stage area. Dedicated storage areas to house tables, chairs, tents, brooms, shovels, and other standard equipment will prevent each performance from being a full set-up and tear-down ordeal, Liteheiser said.

Also, a route to allow for temporary fencing will be established, lined with boulders and logs that better define the space and providing the option for ticketed concert events to have security fences.

Most of the major electrical, lighting, and sound equipment upgrades are in the Tier II priority list, and aren’t yet funded, Aparton said.

During construction, a fence will block access to the amphitheater and surrounding areas, but the majority of the park will remain open. 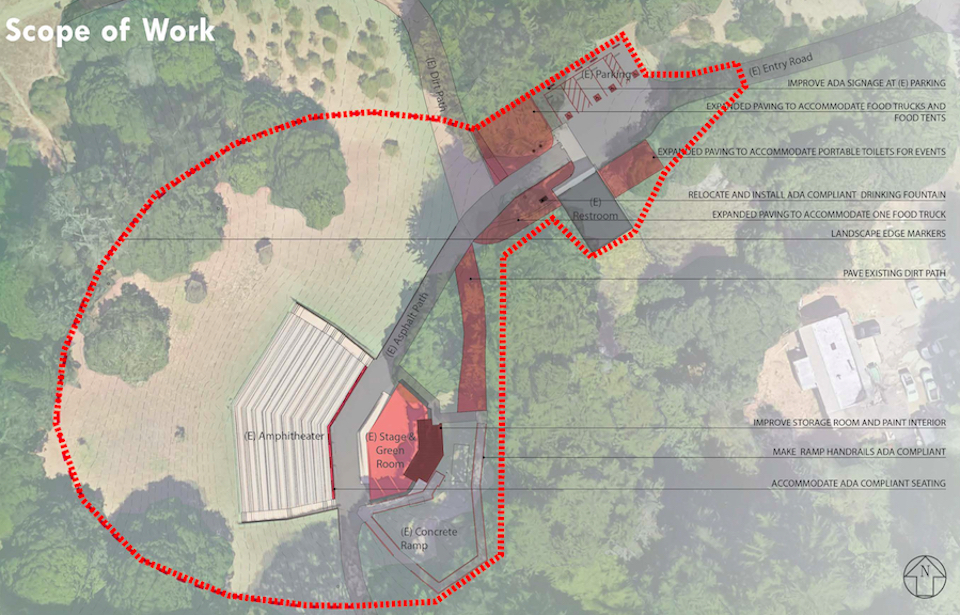 Once the amphitheater reopens, the hope is it will become a venue in the Southeastern part of the city on par with Stern Grove and Golden Gate Park’s meadows, Liteheiser said.

“The concerts and events bring newcomers to McLaren Park, and they can take a walk afterward to discover all of its offerings.” Any revenue from ticketed concerts could go toward a fund to support other community events, she added. AMP is fiscally sponsored by the SF Parks Alliance, and since the park is spread across three San Francisco Supervisor’s districts, AMP’s volunteers are always busy, she said.

While the Crosstown Trail helped bring much more foot traffic to the park, especially during the pandemic, the hope is to use the amphitheater’s revamp as “a step toward having another section of the city offering a one-of-a-kind venue for all types of events,” from concerts and plays to elementary graduations, Liteheiser said.

“It’s a relatively unknown space but it has such amazing potential.”