Out on the far side of Richmond, way around the point of land that launches the Richmond-San Rafael Bridge towards Marin and houses the Chevron refinery, sits a hidden cove with a little boat marina. Here, you'll find colorfully painted houseboats alongside more typical marina denizens; giant sculptures scattered about; a tiny farm complete with livestock and yurts; and a waterfront barbecue joint where, as likely as not, you'll hear live music floating out over the water.

The spot is Point San Pablo Harbor, and the restaurant is called — very fittingly — Black Star Pirate BBQ (1900 Stenmark Dr., Richmond). It opened in September and has been attracting crowds for months to this sleepy little community, which has the distinct Burning Man-esque feeling of an artists' colony, from the oversized sculptures to the communal bookshelf in the marina bathroom. 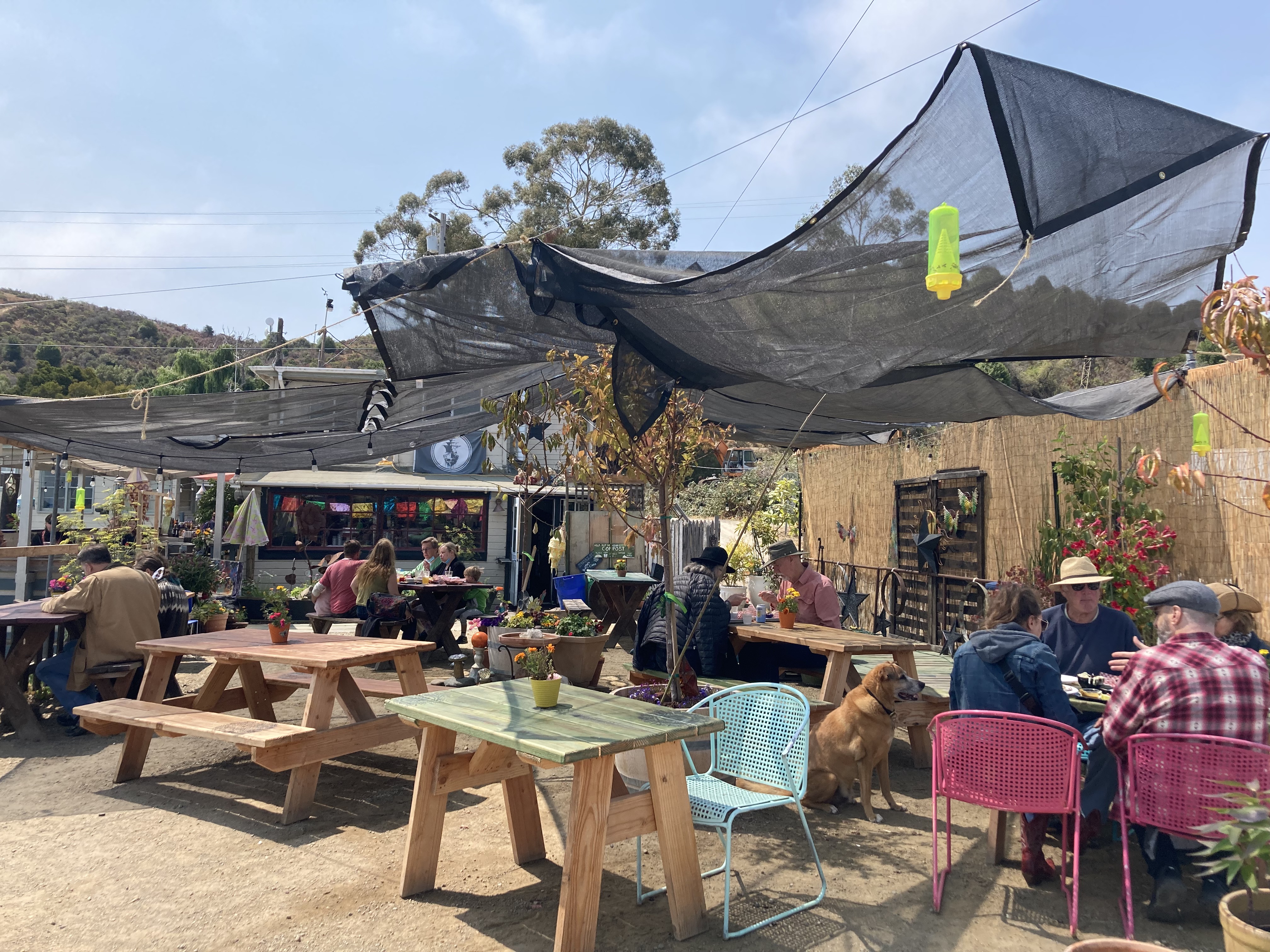 Open Friday, Saturday, and Sunday from 11 a.m. to 7 p.m. and boasting live music every afternoon it's open, chef Tony Carracci serves up Southern-style barbecue, all locally sourced and organic. Visitors will find a mouth-watering selection of meats alongside vegetarian options, and a dizzying array of sides, from slaw and greens to all kinds of potatoes to grits and mac-n-cheese. And then there's the bar.

The food is tasty and the drinks are cold, but guests come for the setting at least as much as the food (at least the first time). The casual, colorful outdoor patio looks out over the harbor and the placid waters where the bay meets the delta, a uniquely serene and unspoiled section of the Bay Area's waterways. 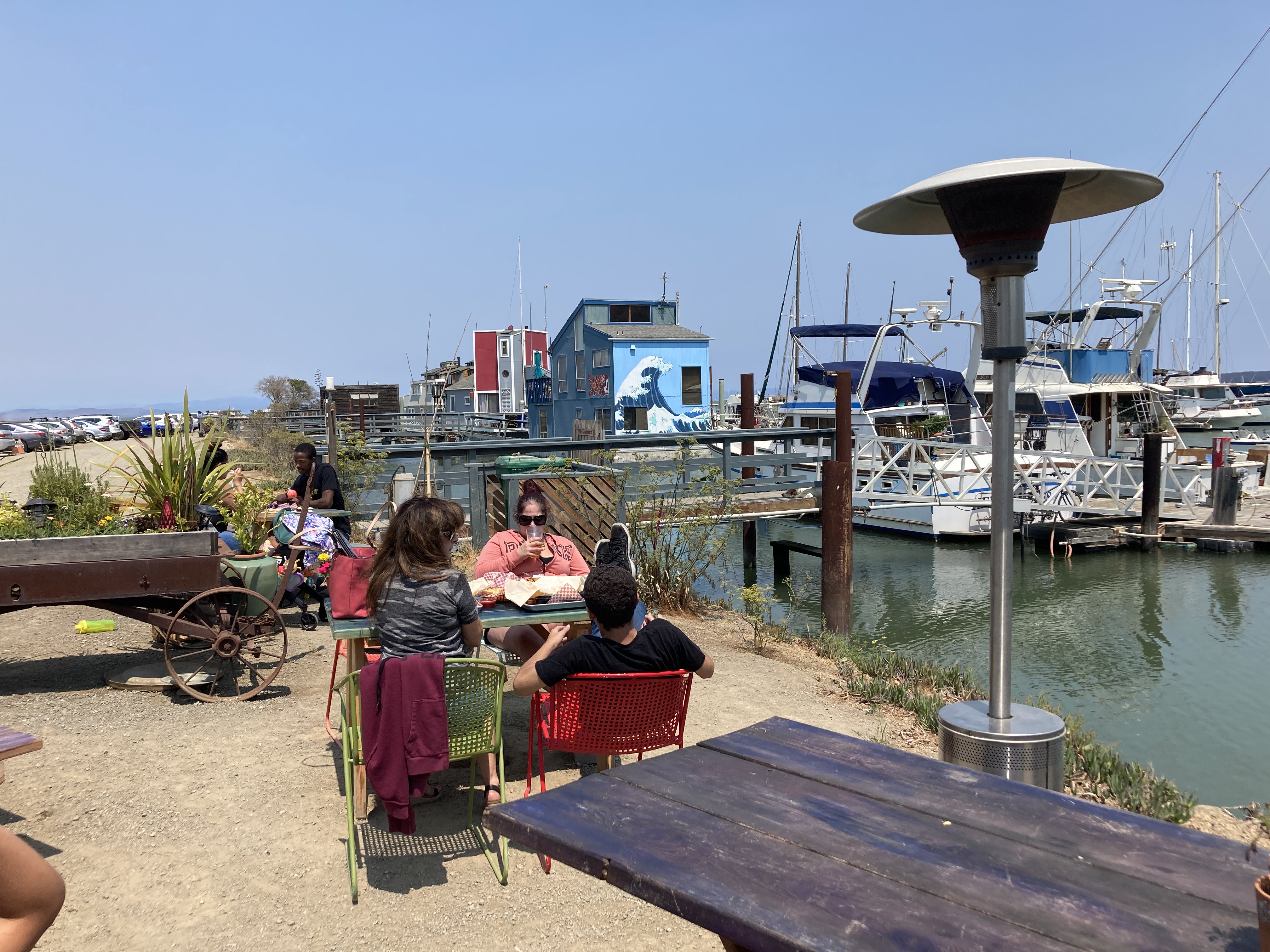 View of the houseboats from the restaurant's patio | Photo: Laila Weir/Hoodline

Probably few guests make it through a visit to the restaurant without wandering around the rest of the harbor (nor should they), checking out the art, the farm, the little beach, and the boats. You can stroll a little way up the coast along old railroad tracks, or go and watch the goats, chickens, and pigs meander around the tiny farm. 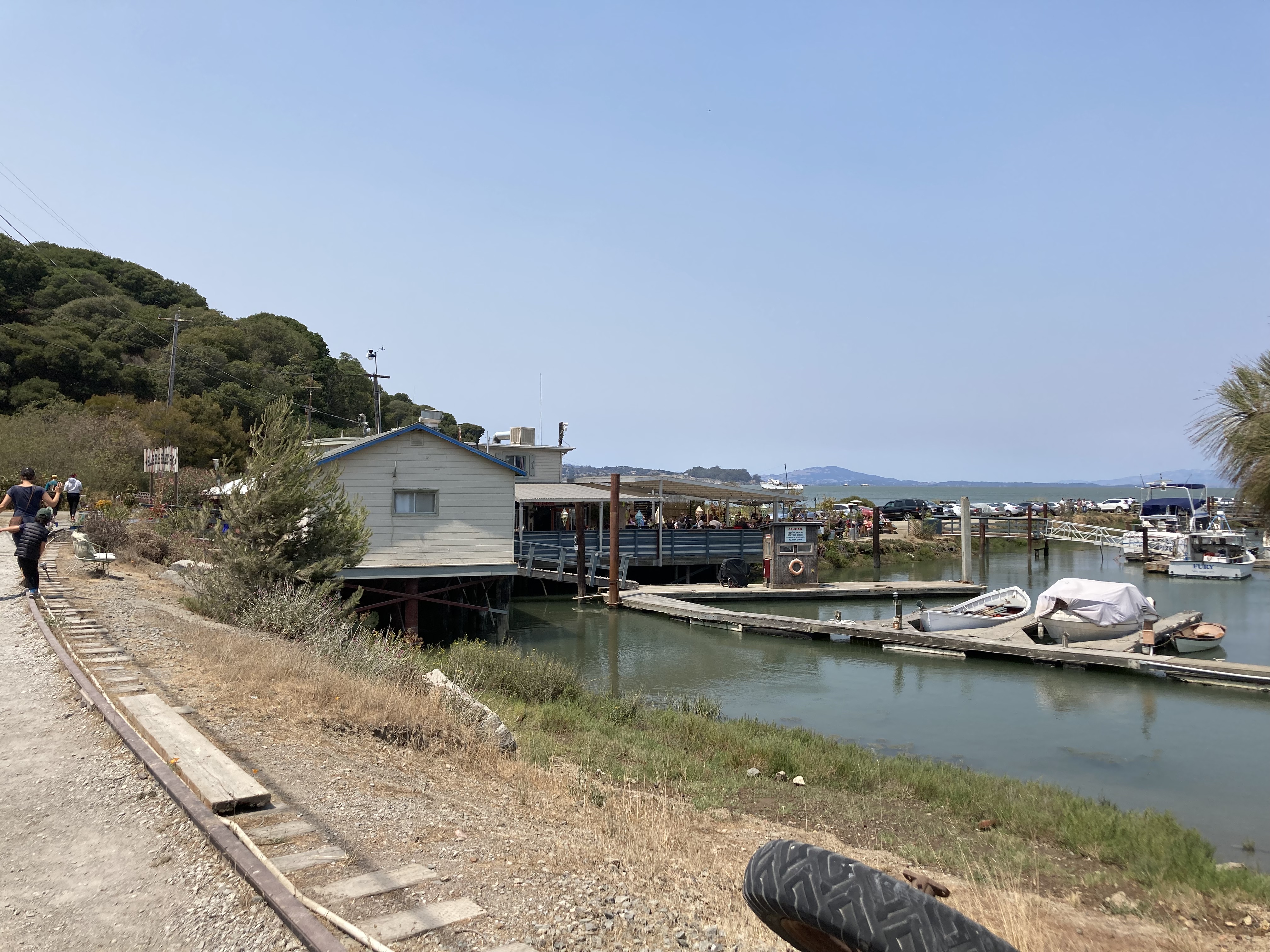 The restaurant sits over the water at the entrance to the marina. | Photo: Laila Weir/Hoodline

It's a quirky, beautiful, tucked-away haven that feels a world away from the rest of the Bay Area, though it's just a short (and very scenic drive) north from the Richmond-San Rafael Bridge. But with the advent of Black Star Pirate BBQ, it's anything but undiscovered. The crowds don't detract from the experience — in fact the hubbub increases the feeling of discovering a hidden and very happening party you never knew was there — but it does mean would-be diners should plan for a wait. 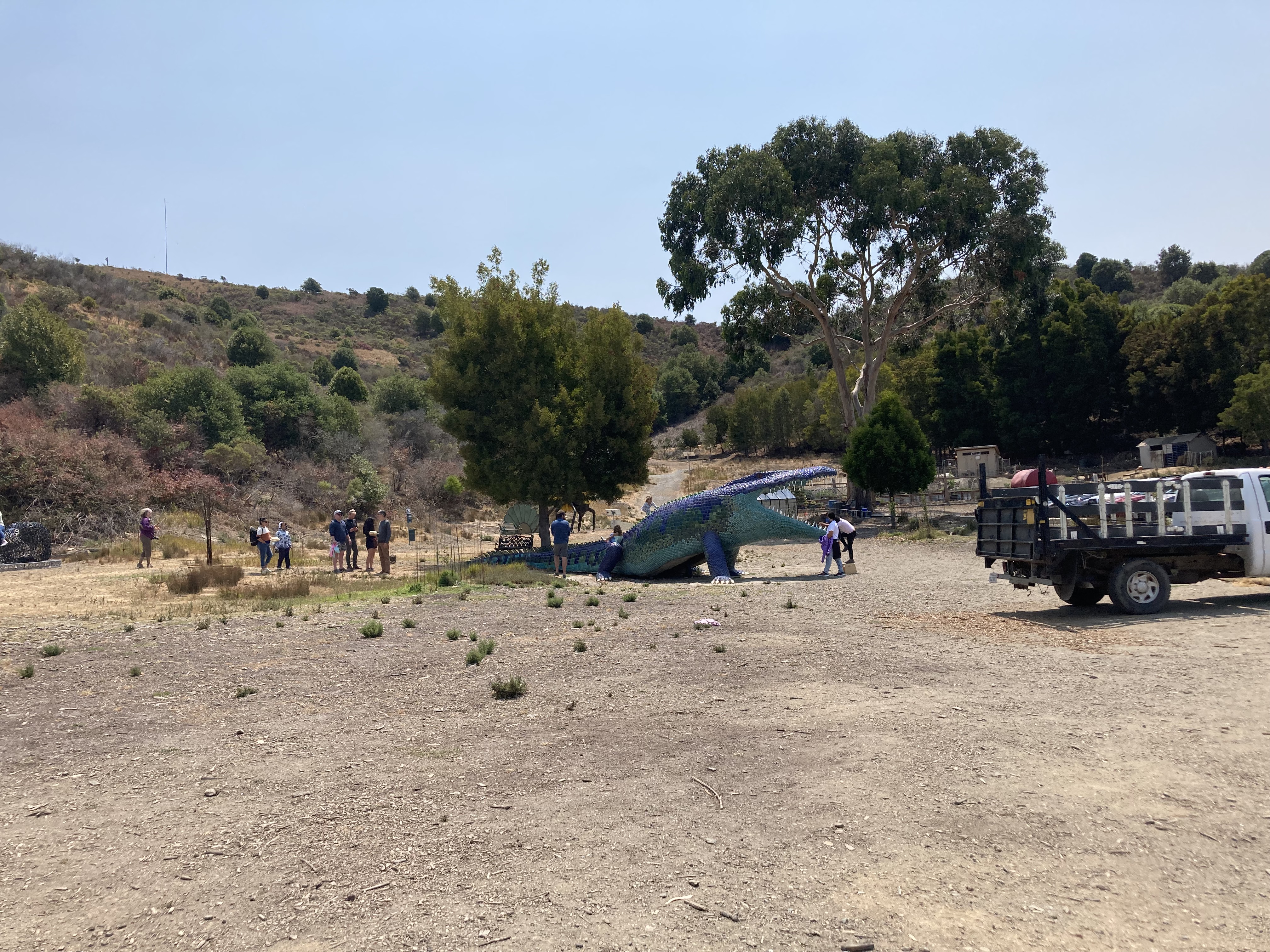 Visitors climb on, and in, a mosaic-covered sculpture of an enormous lizard. Photo: Laila Weir/Hoodline

In keeping with the casual feel of the place, the restaurant is self-seating. You order at a counter and then snag a picnic table to eat at. At particularly busy times, guests can hang out in an overflow patio and sip a drink until they're paged that their food is ready. There's plenty of scenic views and loads of atmosphere to soak up as you wait. 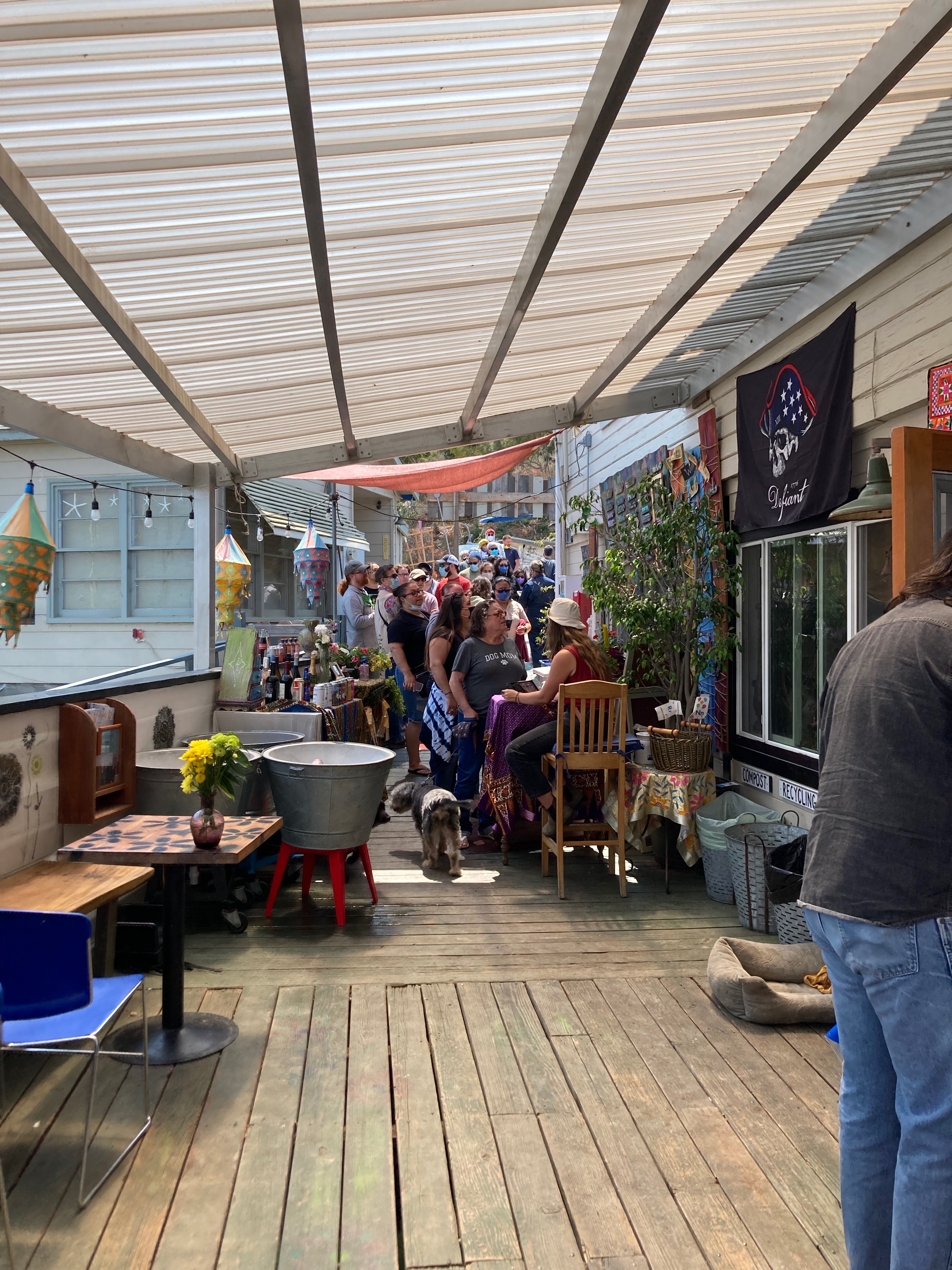 The line for barbecue gets long on a recent Sunday afternoon. | Photo: Laila Weir/Hoodline

Guests can order platters that range from one meat and two sides ($19) to four meats and four sides ($73) or a la carte. Current "meats" are brisket, tri-tip, pork spare ribs, pulled pork or chicken, smoked turkey, and grilled portobello mushrooms. 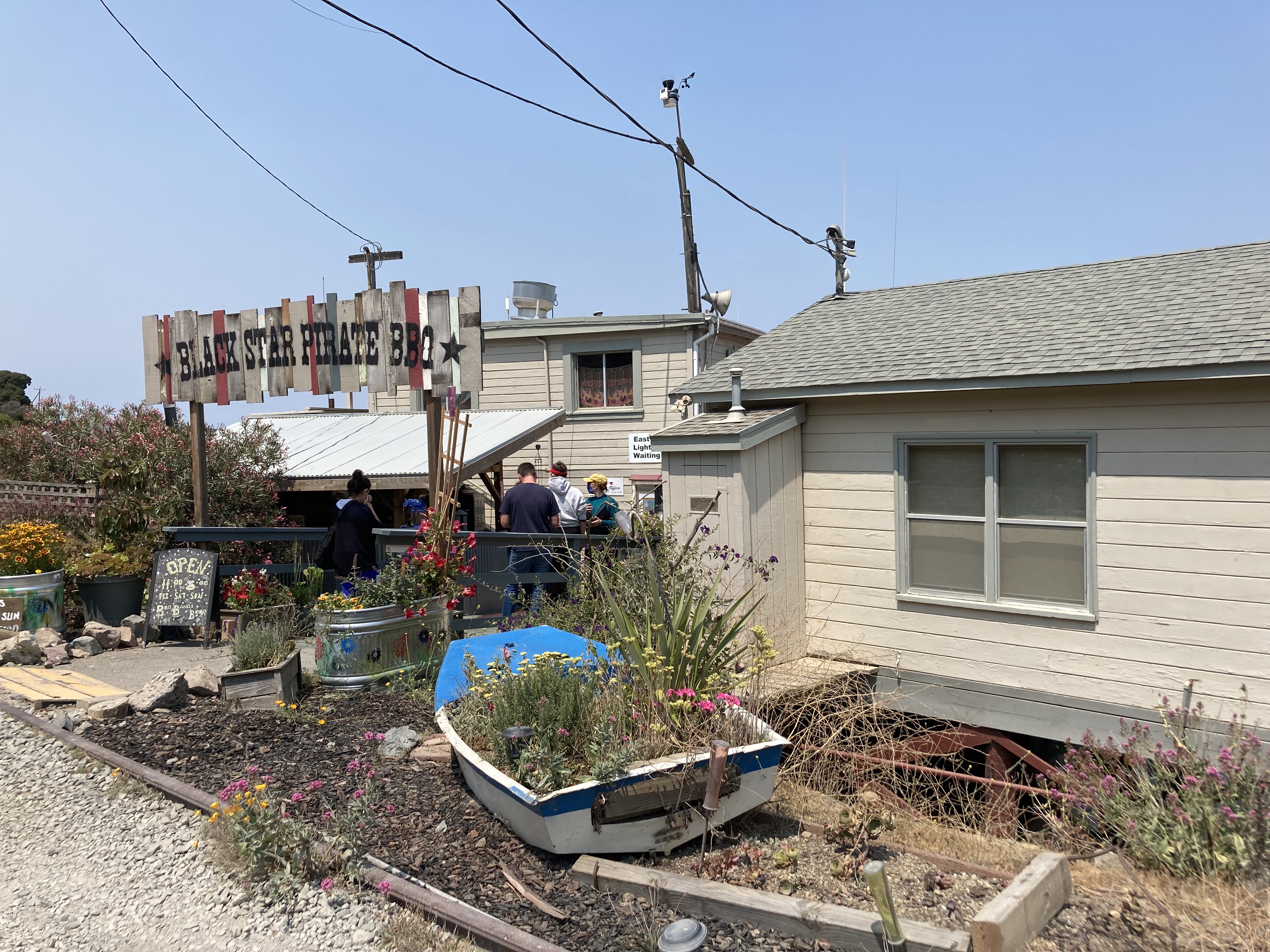 Guests wait at the entrance to the restaurant. | Photo: Laila Weir/Hoodline

Oakland
About 1 hour ago