All photos: Alex Martinez for Haighteration
By Andrew Dudley - Published on May 31, 2011.
San FranciscoDuboce TriangleCastro
When The Bar on Church abruptly shuttered in January, we instantly began to wonder (slash dread) what might take its place at the corner of Church and 14th Streets. Would it become yet another effectively-windowless gay bar slinging toxic drinks and blasting bad pop music to an empty, albeit sticky, dance floor, we feared? Well, we now have an answer. And thankfully, that answer is no. Meet Churchill, a gorgeous, 1940s-inspired throwback cocktail bar opening tomorrow night at 198 Church Street.

Churchill isn't a "gay bar" or a "straight bar," mind you, but aims to be a comfortable and welcoming space for folks of all stripes, says one of the bar's owners, Anthony Healy-London. Healy-London, a Lower Haight resident, and partners Mike Goebel, Darin Brunson, and Dylan O'Brien, have already had success with Bloodhound in SoMa and Double Dutch in the Mission. With Churchill, they've created a vibe that's "similar to Bloodhound in its ambiance and feel," as Healy-London puts it, but with its own unique character. The Space The team worked on remodeling the space for a solid three months. Aside from keeping the Bar on Church's cement floors, and leaving the bar in its position against the back wall, they decided to change just about everything. For starters, there was the ceiling. Originally coated in plaster, the team stripped it bare, exposing long pieces of wood which fit their plans for the space perfectly. The wood had to be pulled down, scrubbed of its plaster, and then reaffixed -- a process which proved time-consuming, but worth the effort. 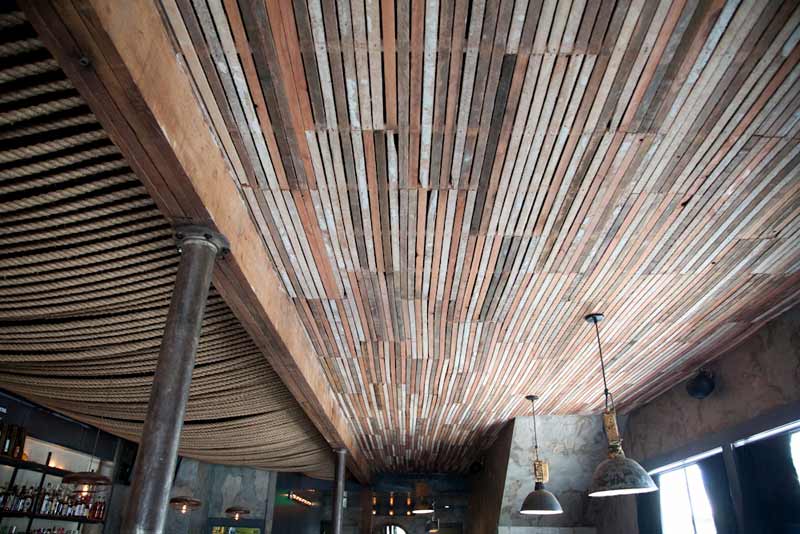 And then there was the issue of light. Or rather, lack thereof. The team felt that the bar's cave-like darkness was nothing short of shameful. "People shouldn't have to drink in secret," Healy-London says, noting that having a cocktail during daylight hours has become socially acceptable (if not desirable --ed.). As such, the team decided that Churchill needed more light. So, they knocked down the bar's south-facing wall on 14th Street and built a new one, incorporating a large window that wraps around to the Church Street side. 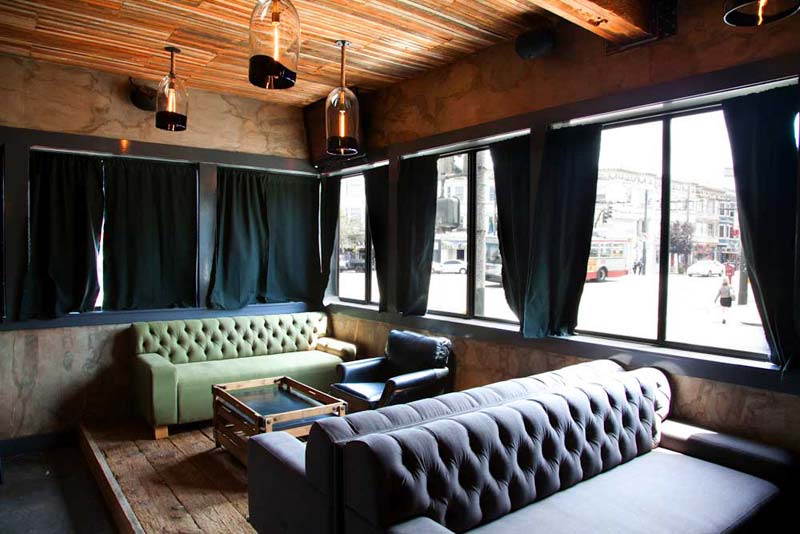 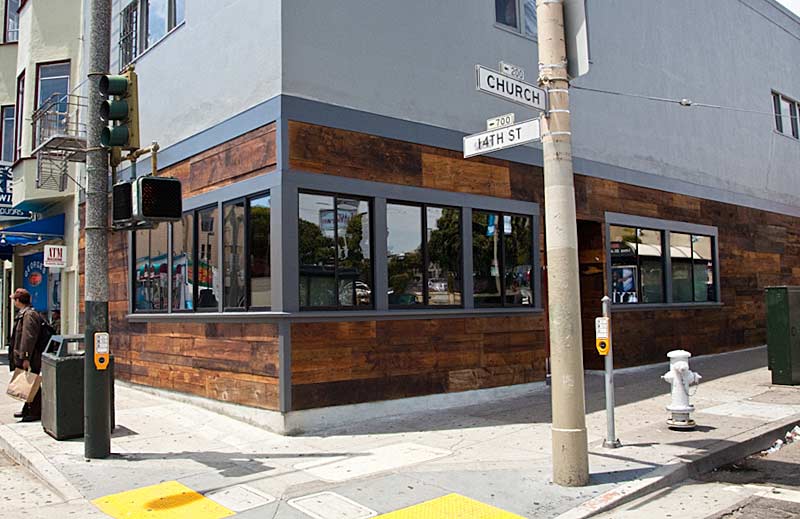 Throughout the space, there are masculine colors and strong textures meant to evoke the World War II era -- steel, wood, leather, and the like. Healy-London says they intentionally decided to let the materials and fixtures, rather than, say, artwork on the walls, give the place all the personality it needs. So, for example, they hung several custom-blown chandeliers from designer Lauren Geremia, who also did the interior work for Bloodhound. There are also some nautical touches, like the 3,000 lbs of ropes hung overhead (meant to convey strength, according to Healy-London), and vintage lanterns affixed to the bar. 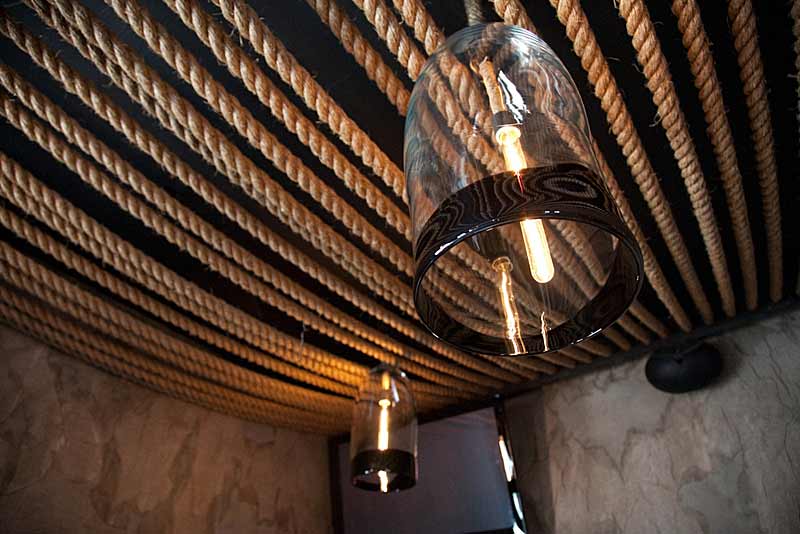 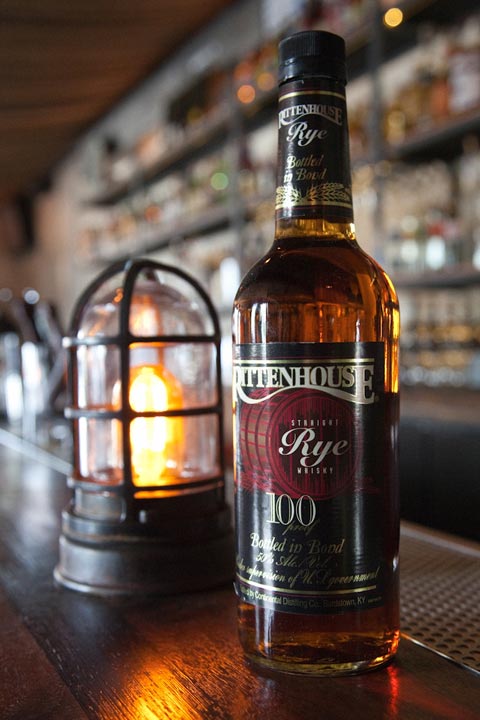 The bar itself is crafted from a single piece of walnut by Soren Hansen, a Danish craftsman who lives in Alameda. Above it hang several light fixtures fashioned from rusty chicken feeders, strung upside-down: 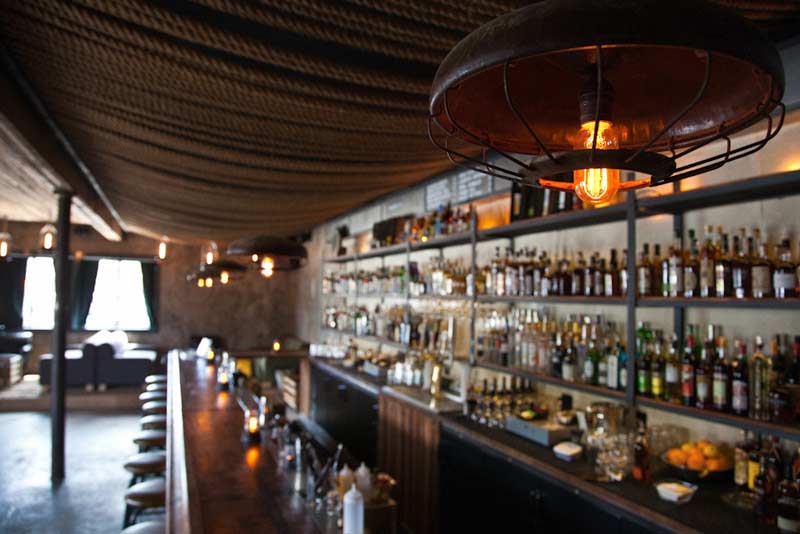 In the back of the bar, there's a second lounge area with a pool table and jukebox. There are a few TVs throughout the bar, but Healy-London insists they'll only be turned on during special events. The Drinks Yes, let's talk about the drinks. Churchill boasts a strong selection of whiskeys, beginning with roughly 40 labels -- a total which will grow over time.

There are also plenty of rums, vodkas, and other spirits, including about 25 different agave-based varieties. As for beer, Churchill will have 10 on draft, mostly from California, although we also spotted some German and Belgian brews. And a few bottled beers, some of which are gigantic, will be available as well. 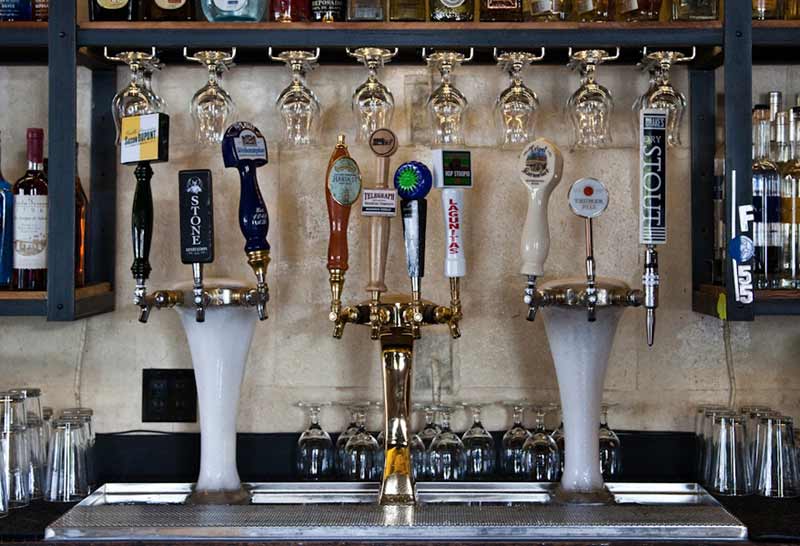 Churchill has come up with a few signature drinks for its cocktail menu, including: The Churchill's 75, a twist on the French 75, which features cognac, benedictine, lemon juice, sugar, and champagne, and... The Brooklyn, a classic cocktail featuring Bulleit rye, Amaro Averna, Luxardo Maraschino liqueur, vermouth, and orange bitters. (Healy-London notes that Winston Churchill's mother, Jeanette Jerome, was actually born in Brooklyn -- who knew?) There won't be a food menu, as Churchill doesn't have a kitchen, but expect some light snacks, e.g. chicharrones, to be available. 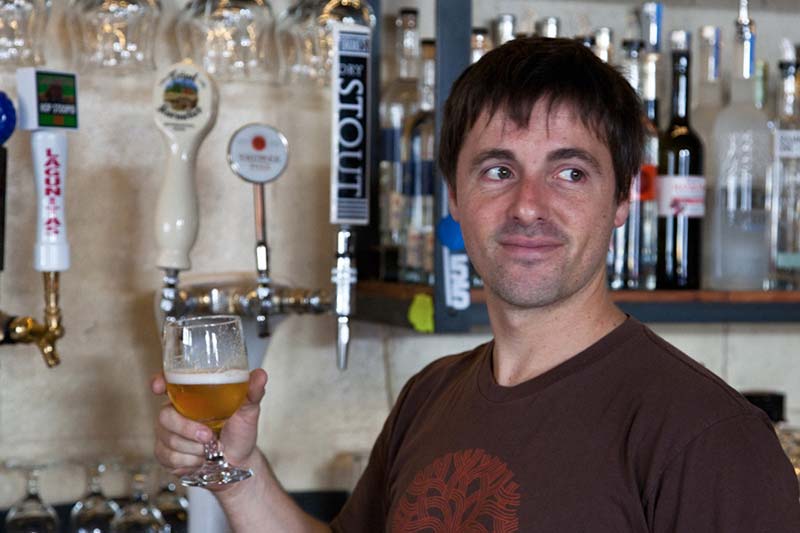 Co-owner Anthony Healy-London
Healy-London, who lives on Pierce Street, is particularly excited about Churchill's location. Having received an enthusiastic welcome from nearby bars like The Residence, Lucky 13, and Blackbird, he feels optimistic about this busy intersection where several neighborhoods meet. With the Lower Haight, the Castro, Duboce Triangle, and the Mission all within walking distance, the bar is uniquely positioned to serve several different communities at once. And based on what we've seen, we wouldn't be surprised if Churchill soon becomes your favorite neighborhood bar -- no matter what neighborhood you call home. Churchill officially opens on Wednesday. It will operate between 4pm and 2am on weekdays, and from 2pm to 2am on Saturdays and Sundays. For more information, visit churchillsf.com, or email [email protected].
San FranciscoDuboce TriangleCastro
About 17 hours ago