Rebar
By Michael Barba - Published on December 21, 2013.
San FranciscoHayes Valley
As the leaves rustled louder than the vehicles sweeping across Octavia Boulevard in the air of a December afternoon, amongst the fresh food and familiar company, a street person said that her daughter had been taken from her over a year ago and that she recently witnessed friends and strangers beaten by police. Others said that she could often be found here in the Growing Home Community Garden, where the boulevard meets Lily Street – in an oasis from the nearby urban blight.

In five short, traffic-bustling blocks the pavement bordering Octavia Boulevard guides pedestrians from the Hayes Street intersections' fashionable boutiques – featuring an ice cream parlor and coffee shop housed in dual cargo-crates – to a pair of chain-link enclosed plots of vegetation which, according to a volunteer at the garden, encompass a sense of community that keeps the Hayes Valley neighborhood in a favorable balance. But for the homeless and volunteers at San Francisco Project Homeless Connect's garden – partially located in front of a building with enormous, colorful letters spelling “Great Adventure” – future tales of gorgeous vegetables and blooming flowers may be halted in the summer of 2014, with the city government of San Francisco planning to redevelop the pair of land parcels into mixed-use housing. “Do I personally look forward to seeing that garden disappear? No, not at all,” said Daniel Watson-Weller, co-owner of Streets of San Francisco Bike Tours on Octavia Boulevard and Linden Street. “But it is kind of the reality of these temporary use projects.” The Growing Home Community Garden is a placeholder on Parcels R and S for the city of San Francisco, which made several plots of land available for interim use along Octavia Boulevard after the removal of the Central Freeway in 2000. “This neighborhood is going basically from an area for freeway traffic,” said garden volunteer Markos Chimes, “to a better living area for people. I think this garden, Patricia’s Green and this boulevard have gone a long way to creating that – and all three of them together, to me, just work.” 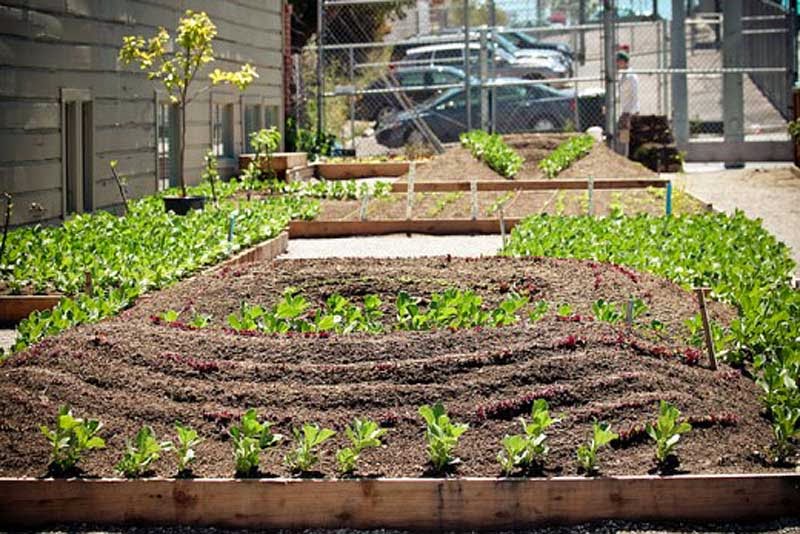 Rebar
In late October, the city announced they were seeking developers to purchase or lease the parcels, as well as one other nearby lot, for the construction of pedestrian-friendly, residential housing or a mixed-use development with retail spaces at ground level. “I feel like we have enough condos in Hayes Valley,” said Watson-Weller, a Hayes Valley native who has witnessed rapid changes in his surroundings over the past decade. “There’s four different major complexes which are growing right now within the neighborhood. However, given that it’s the city’s land, it’s their prerogative to try to make money off of it – it’s kind of expected.” The garden contributes no annual revenue to the city of San Francisco for its use of the parcels, according to an announcement by the Office of Economic and Workforce Development. The city will announce their selected contractor on March 14, 2014, less than one month after development proposal are due. Until then, “we have neighbors that come in, office workers that take their breaks here, [and] we have the homeless people that come in,” said garden volunteer Carol Phillips. “It’s a real monopoly of people. And that’s a wonderful thing because everybody kind of interacts with each other. It’s a sweet thing in a very busy neighborhood.” The garden first opened to the public in February of 2010, three years after its conception by Eric Bayer, according to Phillips, who wanted to create an outreach for people experiencing homelessness or mental illness. “We’re growing all kinds of food: lettuce and carrots and onions,” said Phillips. “Our trees are developing, we have fruit, we have peaches and apples – we’ve had a very good year.” Last summer, the city ended Hayes Valley Farm’s use of several parcels, located across Octavia Boulevard from the Growing Home Community Garden, in favor of housing developments. Police raided the defunct farm after protestors, reacting to the temporary uses’ termination, occupied the lot for two weeks. “I hope [Hayes Valley community members] all just stand up and say, ‘we want to keep this,’” said Phillips. “Then I’m sure the powers that be will want to keep it going. That would be a nice thing for all these folks that are living here. I hope we can save it, I really do.” After the garden is uprooted, Proxy, where Watson-Weller’s Streets of San Francisco Bike Tours operates alongside places like Smitten Ice Cream and Ritual Coffee Roaster, will be the last remaining interim-use project to have come from the freeway’s destruction in Hayes Valley. “I think Octavia Boulevard is really going to lose something if we lose this garden,” said Chimes, “because just having Patricia’s Green isn’t enough, because it’s getting more and more commercialized up there.” The Growing Home Community Garden welcomes volunteers Monday, Wednesday and Friday from noon to 5pm. This article originally appeared on the author's blog, Hayes Valley Times.
San FranciscoHayes Valley
About 22 hours ago