A Year Of The Inner Sunset's Gratitude Center

By Adam Hofbauer - Published on January 06, 2014.
San FranciscoInner Sunset
At 6:45pm on a Monday night, the main room of the San Francisco Gratitude Center is packed nearly to capacity. Lined up in multiple rows of folding chairs, the audience is listening to a man speak about his experiences as a young musician traveling through Europe, coping with alcoholism. On the wall behind him are the 12 steps of the Alcoholics Anonymous recovery process.

Most of the people here are regulars, familiar to each other after years of struggle. And as crowded as the room is, this is only one of 52 meetings that the Center hosts every week. Since January 6th, 2013, the Gratitude Center at 1320 7th Ave in the Inner Sunset has served an increasing number of individuals in need of recovery from multiple forms of behavioral and substance abuse. Though only offering A.A. meetings on site, the Center also provides referral services for issues ranging from overeating to drug abuse to homelessness. The Center's mission statement prioritizes the values of "recovery through spirituality, service, community, mediation and art." It is this art that might be the first thing one notices when entering the space. Paintings in multiple styles line the walls, and pieces of sculpture lurk in the corners -- all of them the works of members of the Center community. 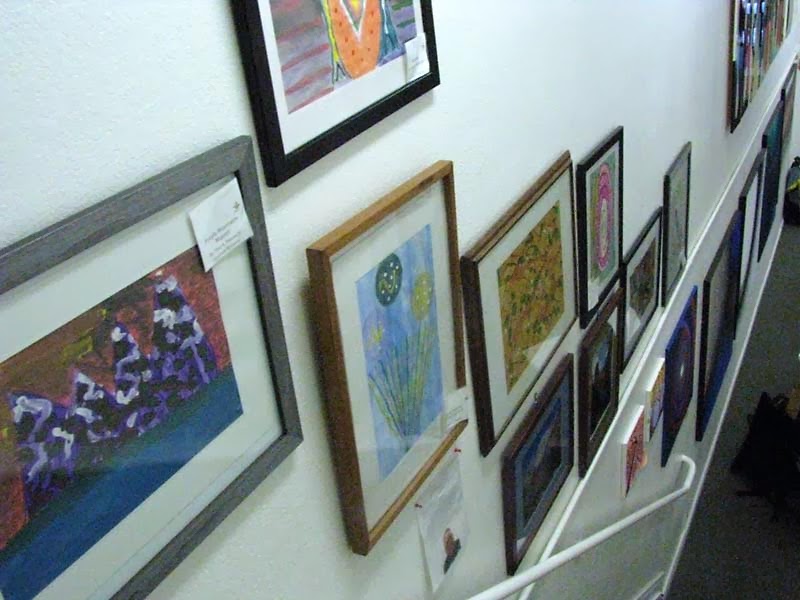 This wide variety of unconventional approaches is something the founders of the location hoped to bring to the recovery community. Ricky Hanson, one of the Center's founders, says, "I know what our mission says, and it doesn’t say anything about A.A." Though the A.A. model of support is central to the location's work, the Gratitude Center also takes a broader approach. The organizers hope to allow any individual to receive whatever kind of services they might require, while also providing community connections through gallery shows and other events. Hanson highlights the Center's overall atmosphere as being a more welcoming environment than some of the other A.A. centers throughout the city. He credits much of the Center’s success over the past year to its ability to attract many of those for whom a feeling of safety and community is paramount. Adding to this appeal, Hanson believes, is the site's non-denominational presentation. Though still adhering to the "god"-based principals of A.A., Hanson says that the site's lack of explicit religious iconography is intentional. "A lot of people claim that the gratitude center breaks tradition," Hanson says. "But the bottom line is that the Gratitude Center is recovery based. [I think] that we're one of the few centers that offer a wide array of art work, recovery, exercise, and programs dealing with mental issues. [We're] really trying to focus on dealing with the fact that this isn't just A.A. or N.A. (Narcotics Anonymous)." Prior to the Center's founding, the main location for A.A. meetings in the Sunset was the Presbyterian Church across the street. Following a series of internal conflicts within the Church's A.A. community, many were left seeking an environment where they could feel more comfortable. It wasn't until nearly seven years later that they were finally able to establish the Gratitude Center as a nonprofit, offering a still-underutilized capacity for support. According to Hanson, members come from all over the city, as well as from as far away as San Jose, seeking the community support that the Center provides. Though they have seen their weekly meetings expand from an initial twelve to the current count of around fifty, Hanson believes that the potential exists for as many as two hundred. Space is a word that comes up often with the Center’s organizers and, in a city where space itself is a premium, they find themselves with more space than they have programs to fill it. On the second floor, a back room sits empty and unused, exemplifying possibilities not yet fulfilled. Hanson points out that the Center itself is capable of housing any number of additional art projects as well. Hanson sees the art produced by the Center’s attendees as the best way to reach out to the local community. He points out how meetings often transition into members patronizing local coffee shops and restaurants, and he would love to see these same members' art on display or for sale in these establishments. Additionally, though no members of the neighborhood homeless community have yet become regular visitors at the Center, Hanson and its other organizers would love to increase their ability to serve these individuals. "I'm sure," Hanson says,"that if (the Center) had a liaison or someone who could call up social services... we’d be a lot better off. So I think that is where the community part will come together with the Gratitude Center. I want the guy at Arizmendi who is standing out there with a Street Sheet to know that the Gratitude Center is over there (and can) help you." At Monday night's meeting, the phrase that comes up more than anything is the phrase, "It's good to see you.” Sometimes it is spoken by people who have not seen each other in years. Other times, it is an exchange between those who see each other every week. The phrase speaks to the Foundation Center's value to its members. It is the idea of repetition, the significance not just of face time, but of seeing the same faces every week, then every year, until the years become decades and the decades become your life. It is the knowledge that your continued success or effort is part of a system of support, of two faces recognizing each other, that keeps the Center a growing part of the Inner Sunset community.
San FranciscoInner Sunset
Dec 03, 2021