Photo: Amy Stephenson/Hoodline
By Amy Stephenson - Published on May 09, 2014.
San FranciscoUpper Haight
You've probably seen the clinic on Cole Street, next to the Goodwill, and you might have even seen the lavender Victorian at the corner of Page and Lyon. But there's a lot more to know about Huckleberry Youth Programs.
We met with residential coordinator Patrick Buckalew and case manager Debbie Linley to find out more. 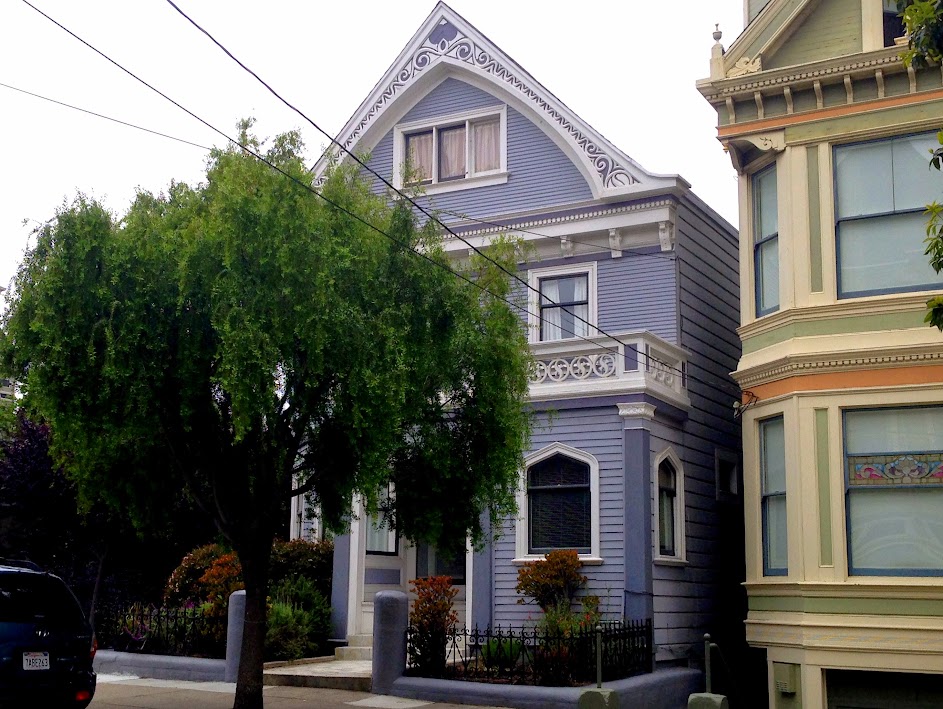 For the uninitiated, Huckleberry Youth Programs serves kids in crisis from 11 to 17 years of age . Huckleberry House (at Page and Lyon) is their residential center, where kids can stay for a few days (or weeks) while Huckleberry gets them the services they need to either reunite with their families, or be moved to a safe location.
Huckleberry Youth Health Center (Cole Street, next to the Goodwill) serves as their clinic, where kids can get everything from reproductive health care and STI tests, to, say, an inhaler. The clinic is run in conjunction with the Department of Public Health, and the services are all free.
Huckleberry was founded in 1967 by Reverend Larry Beggs in response to the massive influx of youth to the Haight Ashbury for the Summer of Love. During their first summer, Huckleberry served 211 kids, far exceeding expectations. By the first year, they'd helped 664 kids, many of whom came from outside the Bay Area. Named after Huck Finn, Huckleberry House was the first runaway shelter in the country.
In October of 1967, Juvenile Court Judge Raymond O'Connor's son ran away and ended up at Huckleberry. In response, the judge ordered a midnight raid on the shelter, on the grounds that a clerk at Huckleberry didn't make a phone call to one teenage runaway's parents. The entire staff was arrested for "Contributing to the Delinquency of a Minor," a misdemeanor. The kids were also arrested for "Being Without Parental Supervision."
Huckleberry House enlisted the help of Willie Brown to work toward changing the laws around their licensing. The charges were eventually dropped, but licensure is still a struggle. They're not quite a child care facility, because that was created for places like boarding schools where kids stay long-term. Currently, they're licensed as a group home, but California is finally getting around to creating a "Shelter License." (Read the full Huckleberry history here.)
Generally, the kids who come to Huckleberry are brought in by police, the community, or, most often, their own parents. Parents call when their kids, suddenly teenagers, start skipping school or staying out after 3am. "Parents might have stayed here when they were kids, or a cousin did, or something, so when they have trouble, they call us. We've been around long enough to serve two generations in the same family."
Sometimes, kids come themselves. When we asked if anyone ever simply knocks on the door, Patrick and Debbie chuckled. "Yes," they answered in unison.
The goal of Huckleberry House is to identify needs, get communication with the family and the runaway reestablished (if it's safe), provide therapy, and set the family up with long-term resources (groups, programs, etc.) that will keep the problem from happening again. Basically, they're a triage system designed to quell the crisis and set the family in the right direction. Success, in their world, means getting a kid to "run away less."
And they know a bit about success. The figure they quoted to me was that 95% of their kids either return to the family or go to a safe and stable location.
"Sometimes, success for us means just listening to a parent who's at the end of their rope. The parents are used to people thinking it's their fault and that they should be able to handle the situation, and sometimes just talking to someone who doesn't tell them they've done something wrong is a huge, huge success."
As rule, Huckleberry is nimble. "We never know what will happen when we answer the phone or open the door." As such, they have to be ready to handle everything from a kid with severe psychological conditions (like bipolar disorder or schizophrenia), to a kid with PTSD or a parent who's concerned about truancy.
To this end, their network is enormous. The amount of acronyms rattled off in a one-hour interview for services with whom they coordinate was truly stunning. They go wherever they need to go: high school wellness centers, TARC (Truancy Assessment & Resource Center), CPS, Edgewood ... Whatever the family needs, Huckleberry can help set them up.
"That said, if a kid comes from even 20-30 miles outside of the city, there's literally nothing to help them out there," Debbie told us. The majority come from the city, or just outside. 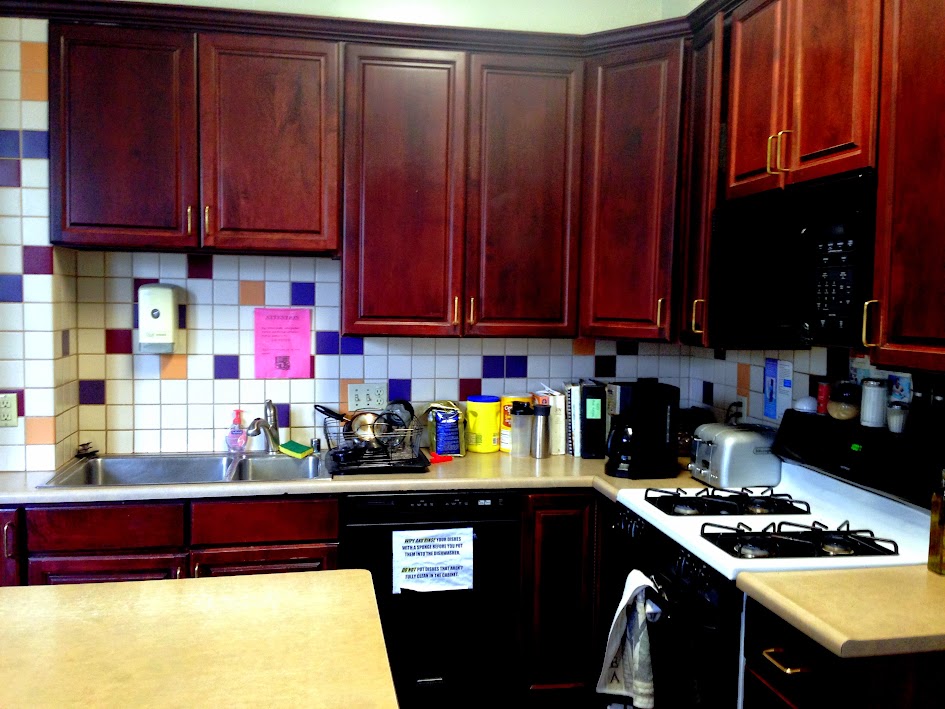 The building is three floors, plus a basement. The first floor is mostly offices, plus a kitchen and dining room and a living room space they use for therapy sessions. The second floor has three bedrooms (one for boys, one for girls, and one with a single bed for kids who have extreme issues, come at 3 in the morning after everyone is asleep, or who are trans), a bathroom, an office for one of their on-site counselors, and a huge rec room with couches, games, an arts and crafts space, and a TV (which is "hardly ever" on). The entire place is warm, welcoming and clean. 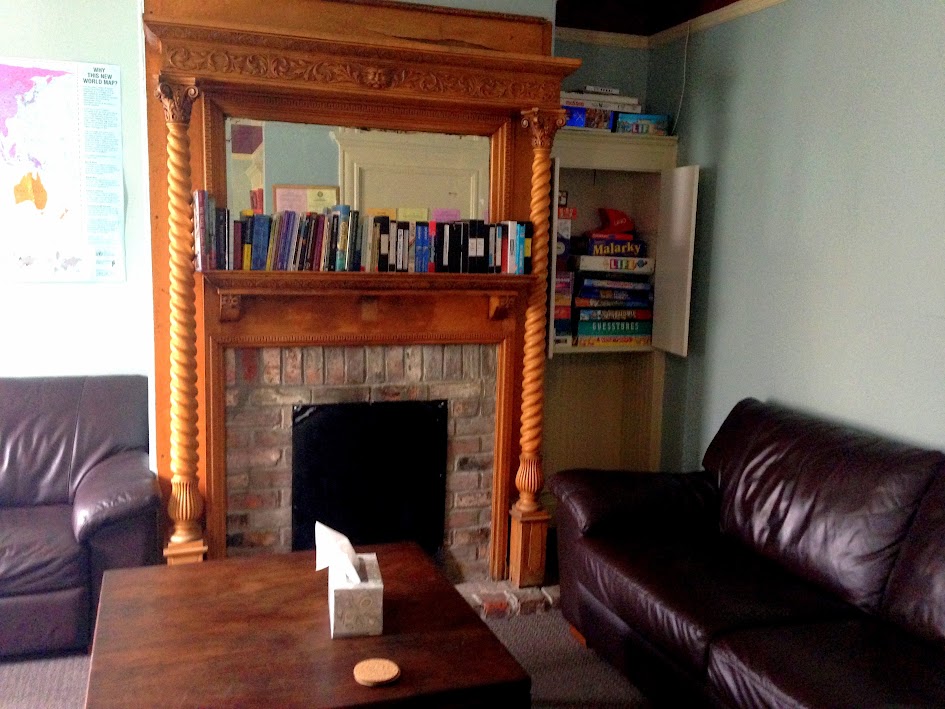 Generally, kids stay for 3-5 days, or, in some cases, 2-3 weeks. While there, they go to school, do homework, and life goes on as normally as possible under the circumstances. Patrick and Debbie told us that cooking dinner (and playing games) works like magic for getting kids to open up. "I wish we did things like this at home," is a common refrain. While there, the kids have access to therapy, clothes, toiletries, and anything else they might need.
When we asked about how things have changed over the years, Patrick and Debbie brought up a troubling cycle. There are fewer kids in the Bay Area because families are being displaced (most of their clients are low-income or marginalized in some way). Since there are fewer families, services that lo- income or marginalized families need get their funding cut. This, of course, increases need for the remaining families, and decreases supply. They told me that while there are fewer kids, the level of trauma has become much more severe as San Francisco evolves. They've seen a huge uptick in PTSD and commercially sexually exploited youth (trafficking).
Want to help? Patrick and Debbie are always looking for donations. When asked what they need most, "toothbrushes!" was the immediate (and somewhat desperate) response. "Nobody brings them when they run away from home," Patrick explained.
That, (new) underwear and pajamas are top of the wish list, as well as food. "You have no idea how much a teenager eats."
They'd also like you to know that Huckleberry Youth Programs has a 24-hour crisis hotline for teens and parents alike. That number is (415) 621-2929.
That's also the number to call if you want to donate, or if you want to learn about any of their other services. For instance, they offer a 6-week Parenting Support Group for parents of teens. They can also be emailed at hh[{at}]huckleberryyouth[{dot}]org.
San FranciscoUpper Haight
Jun 24, 2022