Photo: Jared Schwartz/Hoodline
By Jared Schwartz - Published on July 15, 2014.
San FranciscoCivic CenterHayes ValleyMid-Market
It's been awhile since we discussed the new transit plan for Van Ness Avenue, so let's check up on the status of the project and some changes that have been made in the past few months.
If you haven't heard about this before, the goal of the Van Ness Bus Rapid Transit (BRT) Project is to "create rapid and reliable transit service along the Van Ness Avenue corridor between Mission and Lombard Streets." While the San Francisco County Transit Authority (SFCTA) was the project leader from its inception to the environmental clearance stage, the project transitioned into the hands of SFMTA in December 2013. The SFCTA continues to produce monthly progress reports, some of which are referenced below.
The main features of this project include adding "exclusive center median transit lanes for buses, transit signal priority, high quality stations located in the median, reduced left turns, pedestrian safety enhancements and the implementation of new low-floor buses."
The wording of "exclusive center median transit lanes for buses" is a little tricky. Don't expect to see raised, boarding platforms (like the ones for the T-Third along the Embarcadero) in the middle of Van Ness anytime soon. Instead, passengers will board on the righthand side as they do now, except on 6" curb-height platforms that resemble those currently on Market Street, as seen in the picture below. 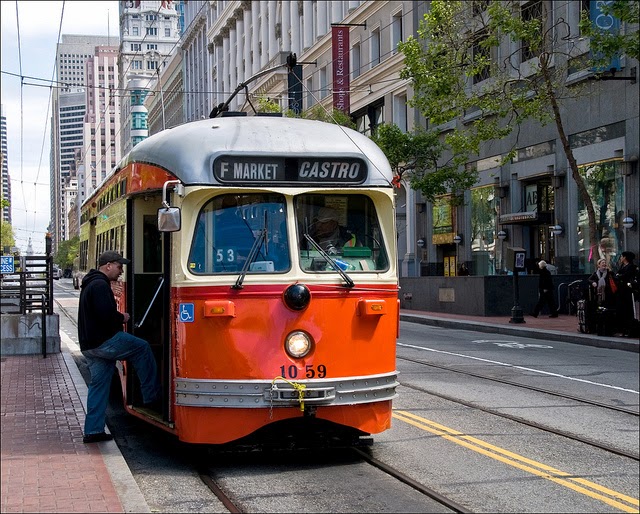 (Photo: Flickr/tonythemisfit)
While platforms are a certainty, the design and height of them still remain under review, partly because the San Francisco Arts Commission (SFAC) objected to the red "seismic wave" shelters lining Van Ness. SFMTA met with the Arts Commission and several other city agencies and came to an agreement that "staff should develop a platform design that provides information displays and advertisement panels positioned to provide some wind protection, but omits the red seismic wave roofs (i.e., no station roofs or canopies)."
So just to be clear, there may be no roof to hide under during those (few) rainy days we get in the winter and spring. But they are still deciding if they'll add seating.

(Photo: Map of Proposed Stops, SFCTA)
So when will all of this take place? SFCTA states that "SFMTA began final design in May 2014 and expects to conclude in mid-2015. Under current assumptions, construction would begin in late 2015 and revenue service would begin in 2018." Below is a copy of the schedule provided by SFMTA.
As for the finances, the core BRT project will cost $162 million but the total package (including projects related to this initiative) is expected to be around $250 million.

(Photo: SFCTA June 2014 Meeting Memorandum)
If you're interested in learning more, the SFCTA's Plans and Programs Committee is holding a meeting today at City Hall (Room 263) at 10am. If you can't attend in person, the meeting will stream live or be available on demand later right here.
As a neighborhood that borders on this project and many of our residents potentially using it to get across town, what are your thoughts on this initiative and the changes? And what about the roofless bus shelters? Let us know below in the comments.
San FranciscoCivic CenterHayes ValleyMid-Market
About 3 hours ago