From Disco To Punk, Remembering The I-Beam

Photo: Michele Turchetto/Facebook
By Camden Avery - Published on August 03, 2014.
San FranciscoUpper Haight
On an October night in 1977, Sanford Kellman opened the doors to the I-Beam, a disco at 1748 Haight Street, on the second floor of what was once called the Park Masonic Hall.
The I-Beam was reportedly one of San Francisco's earliest major discos. It offered, above everything else, a place for all kinds of people to dance, and it booked some of the best talent around, especially as it rode the wave from late disco into new wave and punk.
In 1977, the year Harvey Milk was elected to the Board of Supervisors, the Haight was part of the same district as the Castro. Michael Xavier, a local resident who used to frequent the I-Beam, told us that at the time, most of the few major businesses in the neighborhood were gay-owned, and there was a vibrant queer world centered in the Haight. The bar Trax, he said, is just about the last remaining chapter of that part of the Haight's past. 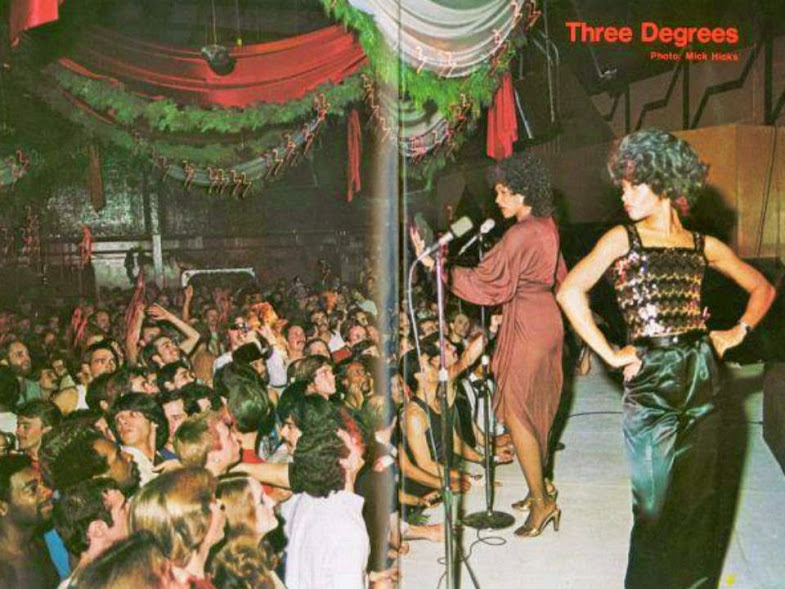 (Image via Facebook/Michael Xavier)
The I-Beam was yet another part of gay life in the Haight: there was disco, there was a busy men's room, and there were even go-go boys as late as 1988.
Denise Laws, who worked as a bartender at the I-Beam throughout the 1980s, said that even towards the end of her stint there most of the employees went by monikers like Lady Di and Blanche. "It was pretty much a bunch of gay guys that worked there," she said, "and then there were the token straight people." 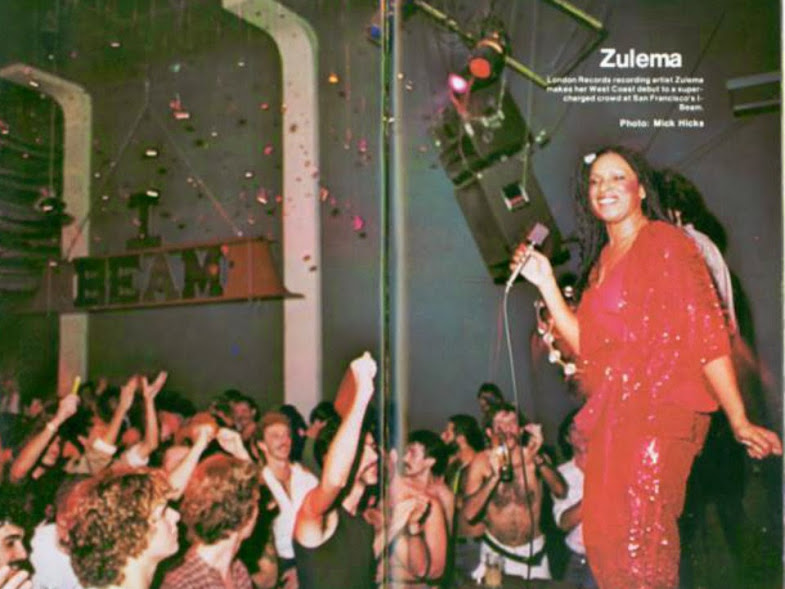 (Image via Facebook/Michael Xavier)
As much as it was a gay refuge, the I-Beam was known to be porous and open to everyone. It supported a community of music fans that exploded sexual boundaries, and the music it hosted defied typical straight-or-gay logics. (An interesting corollary here is a queer element in hardcore punk through the late 80s and into the 90s.)
Over the years, the I-Beam made a name for itself largely as a venue for new wave and punk; it eventually hosted weekly hip-hop nights, and even a weekly acid house night at the end of the 1980s.
The roster of groups who performed at the I-Beam over the years is astonishing. As Xavier said, "every band and their mother played there." 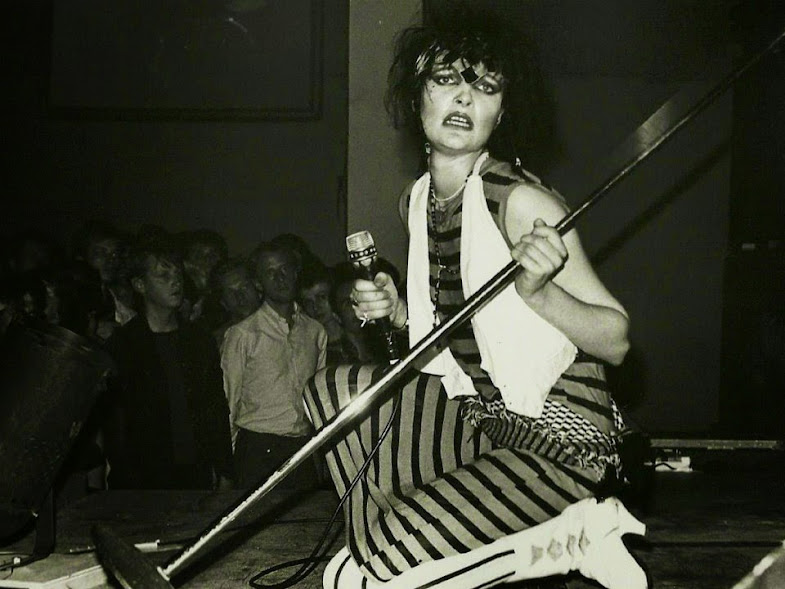 (Siouxie & The Banshees, photo by Bobby Castro)
In addition to a regular rotation of DJs, especially regular DJ Michael Garrett and KUSF DJs Ron Quintana and Cathy Cohn (who booked talent for the club), the I-Beam hosted—brace yourself—Sylvester, the Trammps, Duran Duran, New Order (for $10!), Diamanda Galás, the Buzzcocks, the Beastie Boys with Run-DMC, Siouxie & The Banshees, the Pixies, the Jesus & Mary Chain, Gwar, Camper Van Beethoven, Jane's Addiction, Smashing Pumpkins, Pearl Jam, the Slits, Violent Femmes, the Cramps, the Red Hot Chili Peppers, Ice-T, Nick Cave & the Bad Seeds, 10,000 Maniacs, Butthole Surfers, Buck Naked & the Bare Bottom Boys, Red Kross ... you get the picture.
And that, Xavier said, is something that crystallized in the music scene in San Francisco at the time: there was music—new wave, house, disco, punk, reggae, 80s rock—and there were the people who had their love of music in common. It was probably "Indie," he said, but "they didn't know how to categorize it." 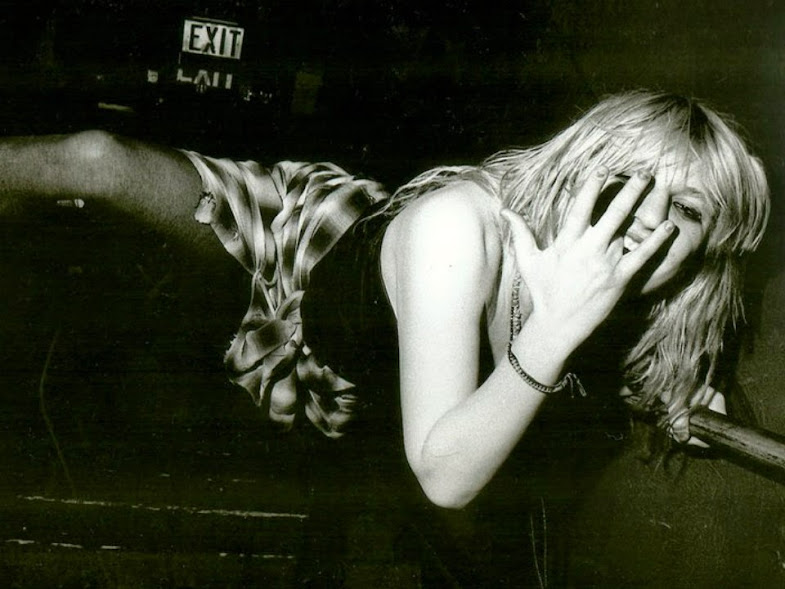 (Courtney Love at the I-Beam, photo by Bobby Castro) 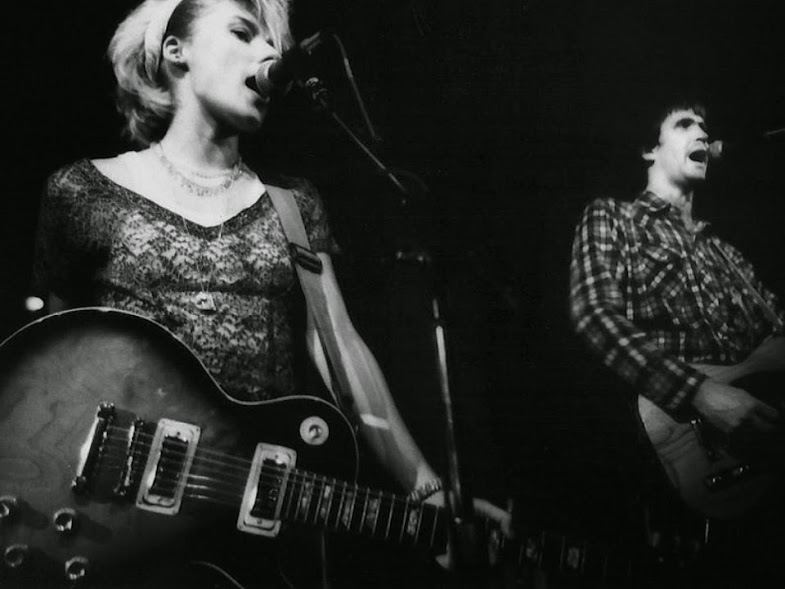 (Blood On The Saddle, photo by Bobby Castro)
We spoke to Ron Greco, a Haight-based punk rocker who used to perform a couple of times a year at the I-Beam with his band Crime. He met his first wife at the I-Beam: after she told she'd just broken up with her boyfriend, he kissed her and they went on to be married for nine years.

"What was nice about it was a great PA system," Greco said. "The ceilings were tall, the backstage area was great. It was really great for musicians."

Crime opened at the I-Beam for, among other acts, Divine, who Greco first met while opening for Sylvester and the Cockettes at the Palace Theater in North Beach.

Denise Laws started working at the I-Beam as a bottle girl in 1980 or 1981, she said, worked her way up to a barback and  bartender, and stayed until about 1990. "It was great," she said, "I kind of grew up there all through my twenties. I loved it. I worked three nights a week, was able to get by, and met some really great people."
It wasn't exactly a free-for-all, she said, "but it had that sort of spirit for sure. It was the same thing at the Stud [on Folsom], but the Stud didn't have live bands."
Laws said the I-Beam was about the same size as Slim's, maybe a little bigger, with one main room with a bar along the entire wall, a central stage and a ticket booth on the stairs that brought you from street level inside. There was also, she said, a video room, a game room with two pool tables and a smaller satellite bar, and a backstage loft for the lighting crew.  "The place was huge," she said.
She also said she remembers a lot of the regulars because she didn't drink when she was at the I-Beam.
Because she was on duty, we asked?
"No," she said, laughing, "trust me, it wasn't that. That didn't matter. People on duty, they drank and there was a lot of nose candy."
A lot of the people who used to frequent the I-Beam aren't around anymore, she said, but she runs into some of them now and then. Just last week she was buying furniture off of Craigslist, the woman who was selling recognized her, and they got to talking about it.
Part of the reason the number of people who remember the I-Beam is sparser than it might be, of course, is because of the generation decimated by AIDS.
"I had some good times there," Laws said, but "it's really sad ... during the mid to late 80s AIDS was hitting the pavement and lots of really good friends of mine died, a lot of people that I worked with died. It was sad, really sad."
The I-Beam faced trouble on-and-off over the years with neighbors complaining about noise levels. Xavier said that during an early protest presented before the planning commission by neighbors against the club, a supporter of the club arranged to record the Hell's Angels riding their motorcycles around the block at 10pm. "That's what it sounds like at 10 o'clock at night," they said, and the club stayed open.
The I-Beam opened after a brief closure following the Loma Prieta earthquake, which split the ceiling, and stayed open up until 1994, when it closed its doors for good. The site stayed vacant for another 10 years before it was demolished and replaced with an apartment building with storefront retail space.
Though the I-Beam has been closed for 20 years, many longtime locals still have memories of time spent dancing, socializing, and partying the night away in one of San Francisco's most iconic clubs. If you're one of them, reminisce about your memorable experiences at the I-Beam in the comments.
San FranciscoUpper Haight
Aug 12, 2022