by Andrew Dudley @andrewdudley
September 30, 2014
It looks like the many months of construction on the eastern end of Haight Street have finally wrapped up. Almost.
The Market And Haight Streets Transit And Pedestrian Improvement Project (or MAHSTAPIP if you're nasty) involves a number of upgrades, including opening the easternmost block of Haight to two-way Muni traffic, creating a transit-only lane from Laguna to Gough, upgrading the curbs and sidewalks at the Market/Haight/Gough intersection, and tweaking traffic signals to improve traffic flow and pedestrian safety.
Transit-only lane
First up, the new transit-only lane that it seems like we've been talking for years (because we have) was finally painted over the last 48 hours. There's now a red eastbound lane (pictured above) extending from Laguna to Octavia, alongside a right-turn-only lane for regular traffic. (Haight between Octavia and Laguna also got repaved, while they were at it.) After crossing Octavia, Muni buses and other special vehicles can now continue along the red carpet in their own dedicated lane, all the way down to Gough/Market. Gone are the parking spots which once lined the southern side of the block. 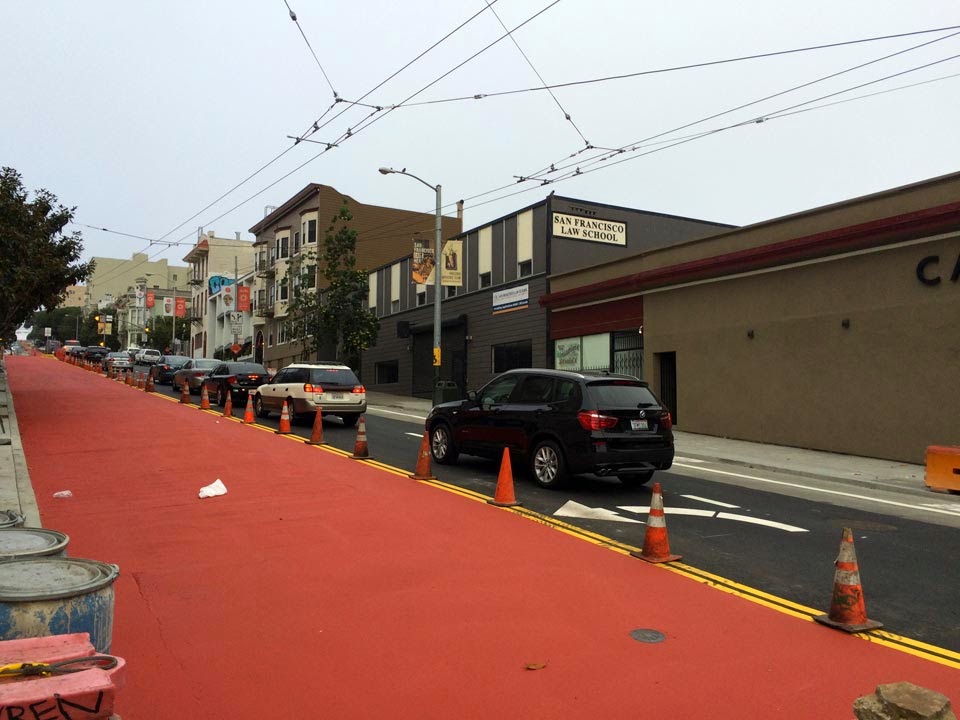 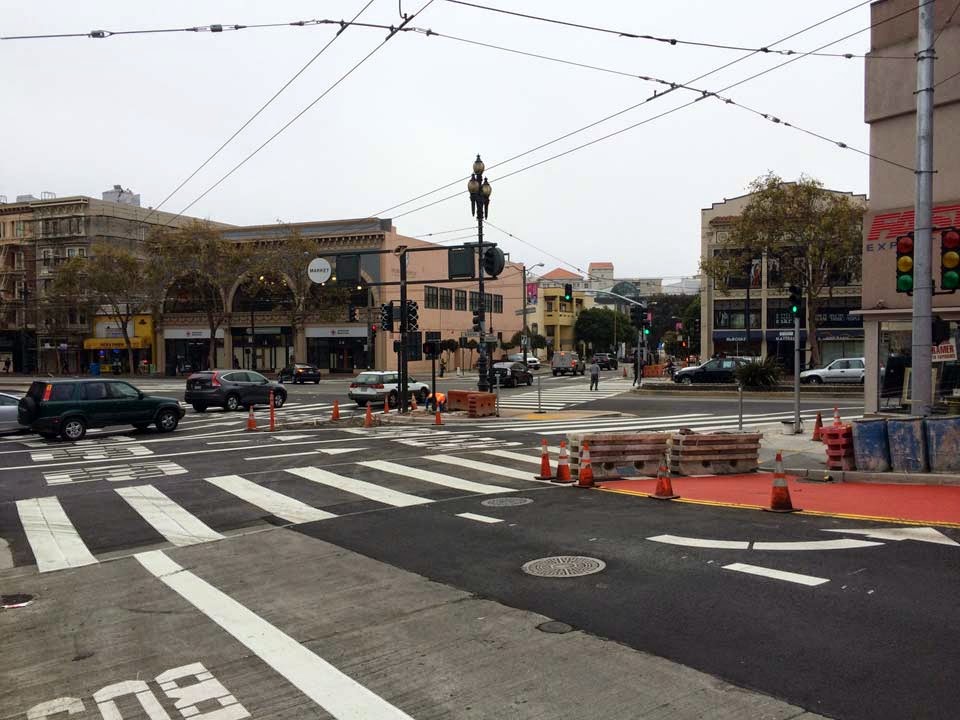 Haight/Gough/Market intersection
At the end of Haight, you'll find an upgraded intersection. Crews have extended the sidewalks, installed curb ramps, and done some underground sewer and water work. 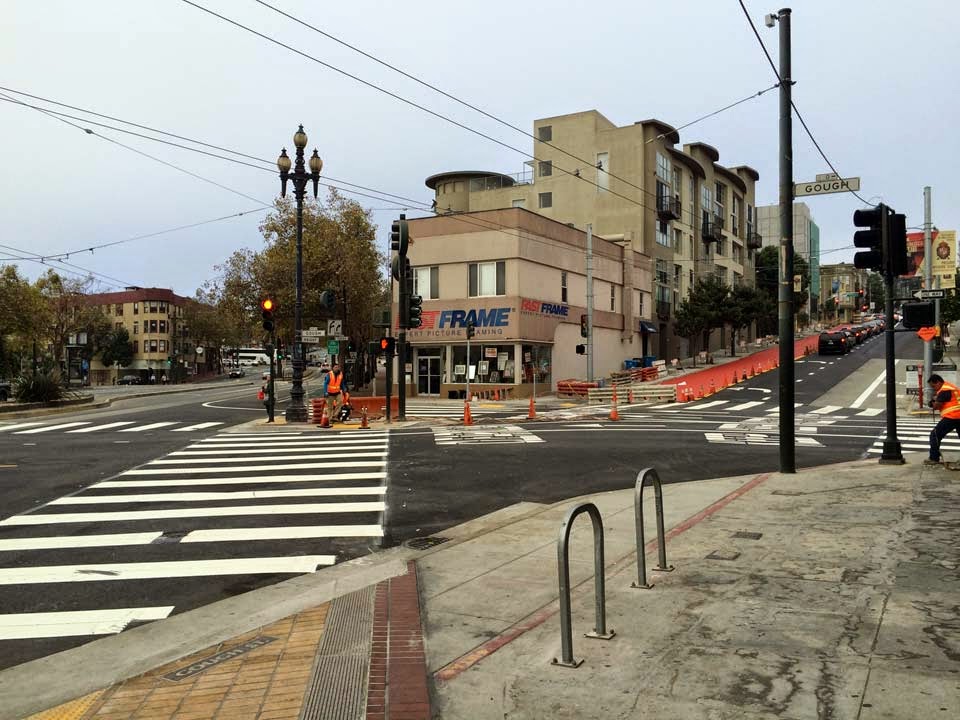 It's a nice change from the seemingly constant construction work that has occupied the intersection in recent weeks: 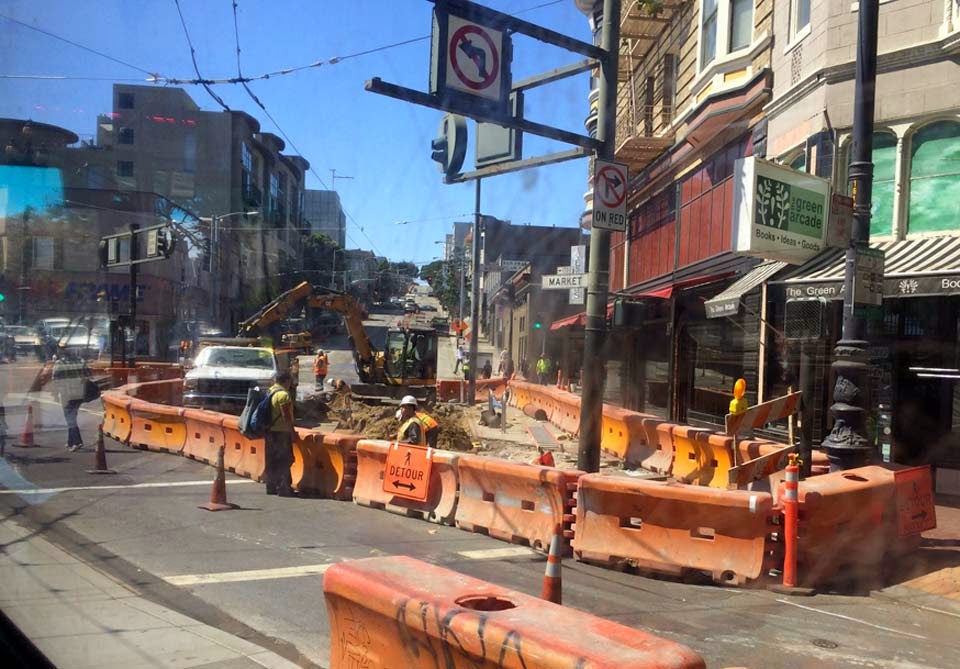 While major construction related to the project is now over, the SFMTA notes that there's still one step left before the transit-only lanes will open and the project will be considered complete.
Next week, crews will be testing traffic signals in the area, to prepare for the new eastbound flow. Once those tests pass, they'll remove the cones and barriers, and the new traffic and parking configurations will officially go into effect.
Neighborhoods
Hayes Valley, Lower Haight