Street lamps ready to be installed (Photo: CastroStreet.org/DPW)
By Roy - Published on September 24, 2014.
San FranciscoCastro
New street lamps arrived yesterday as part of the Castro Streetscape Improvement Project upgrades, with crews installing the new lamps on the west side of Castro Street between Market and 18th Streets.
Reminiscent of the Seattle Space Needle, the new street lamps have a saucer-shaped lamp at the top and taper down to a crosshair-style support pole. As you can see below, the new pole design will likely make it much more difficult to post the event flyers that paper the current Castro light poles. 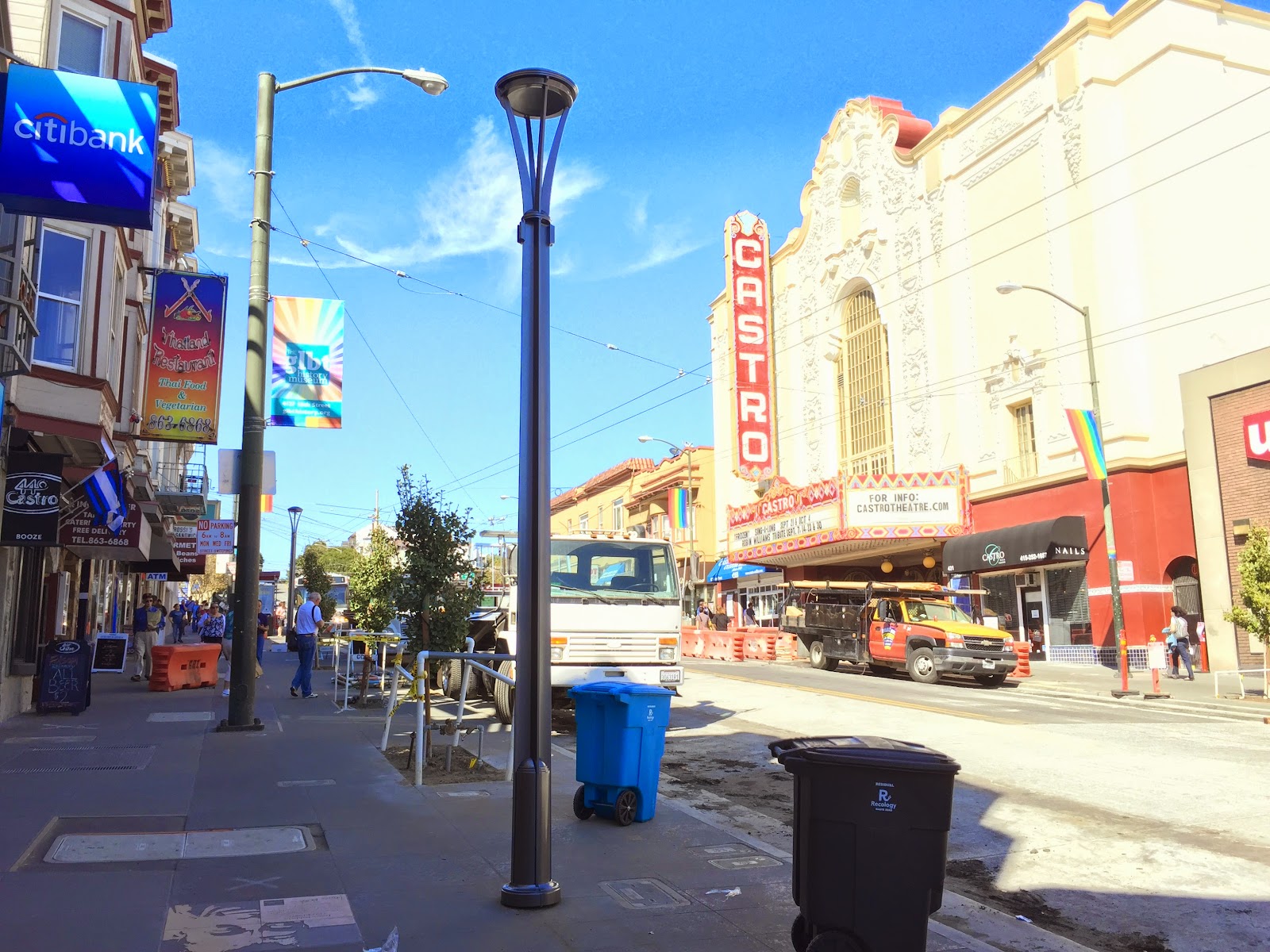 Roy McKenzie/Hoodline
Castro Streetscape project lead John Dennis of the Department of Public Works said that the street lamps probably won't get connected to power until after the Castro Street Fair next Sunday. Dennis also mentioned that these "pedestrian scale lights" represent only 50% of the new lighting coming into the Castro.
"These pedestrian scaled poles are meant to supplement roadway lighting and help illuminate sidewalks and Rainbow Honor Walk Plaques, and will have a warm white light," said Dennis. "We expect to have all lights including new roadway lights (which will include celebratory multi-colored programmable downwash lights) up and running by Halloween."
Crews will continue to install the remaining pedestrian scale light poles on the east side of Castro Street over the next few days. 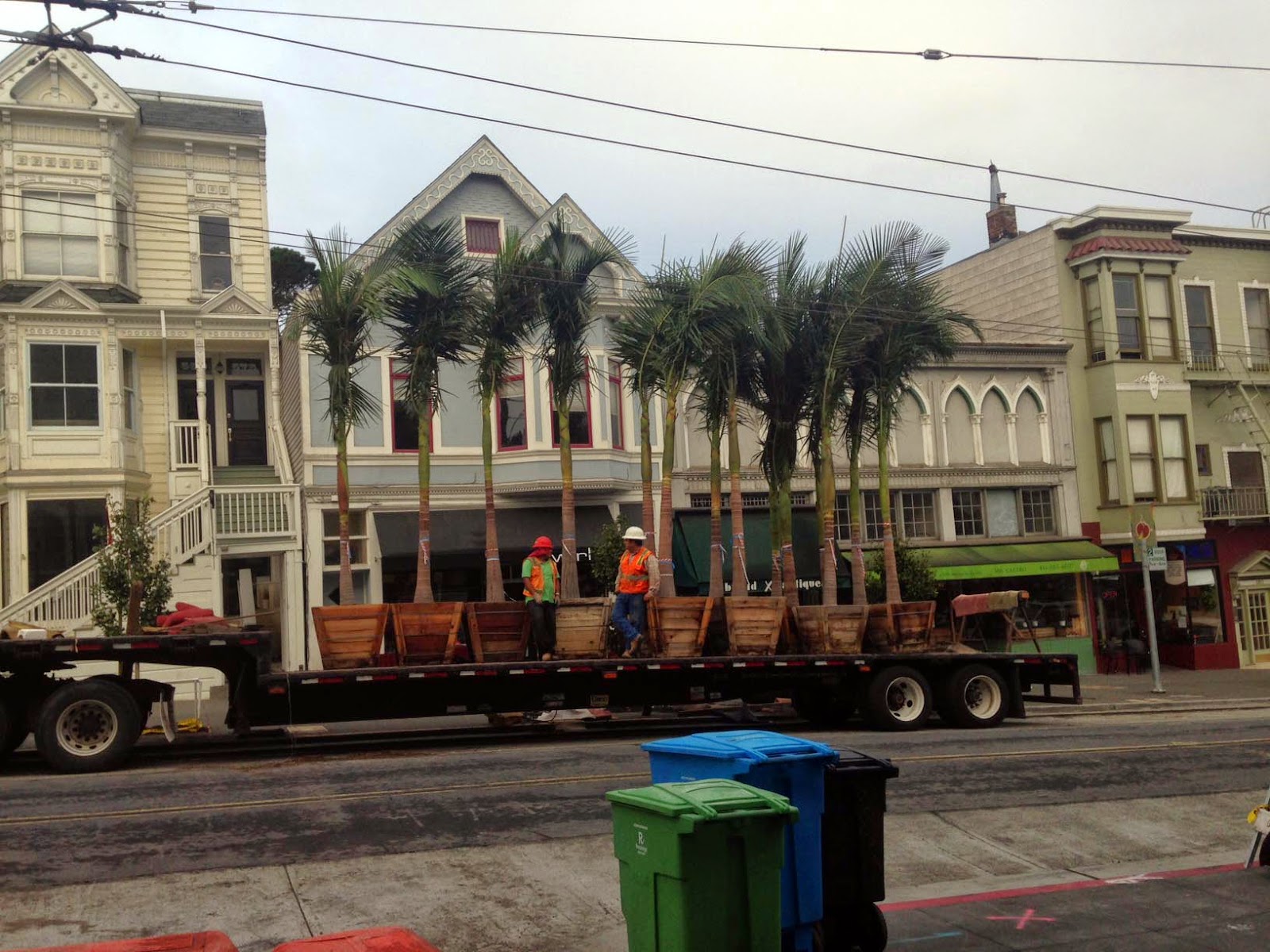 via DPW
Along with the recently installed ginko trees,  the Castro's new flora is set to be further supplemented with the arrival of the new King Palms (see above). According to Dennis, the DPW hopes to have all the tree planting complete prior to the Castro Street Fair.
With changes now occurring on a daily basis, now might be a good time to take a stroll in the neighborhood and take stock of what's new. With that said, what do you think of the Castro's fresh look?
Update: 1:35pm:  The DPW reports that the contractor has now begun pouring the special sidewalk in front of the Castro Theater. The sidewalk flags (squares) are being poured first, and the work will be followed with the special brick inlay band in a few days. Per the DPW's update: "This type of sidewalk finish takes a bit longer to complete but it'll look amazing when it's finished." 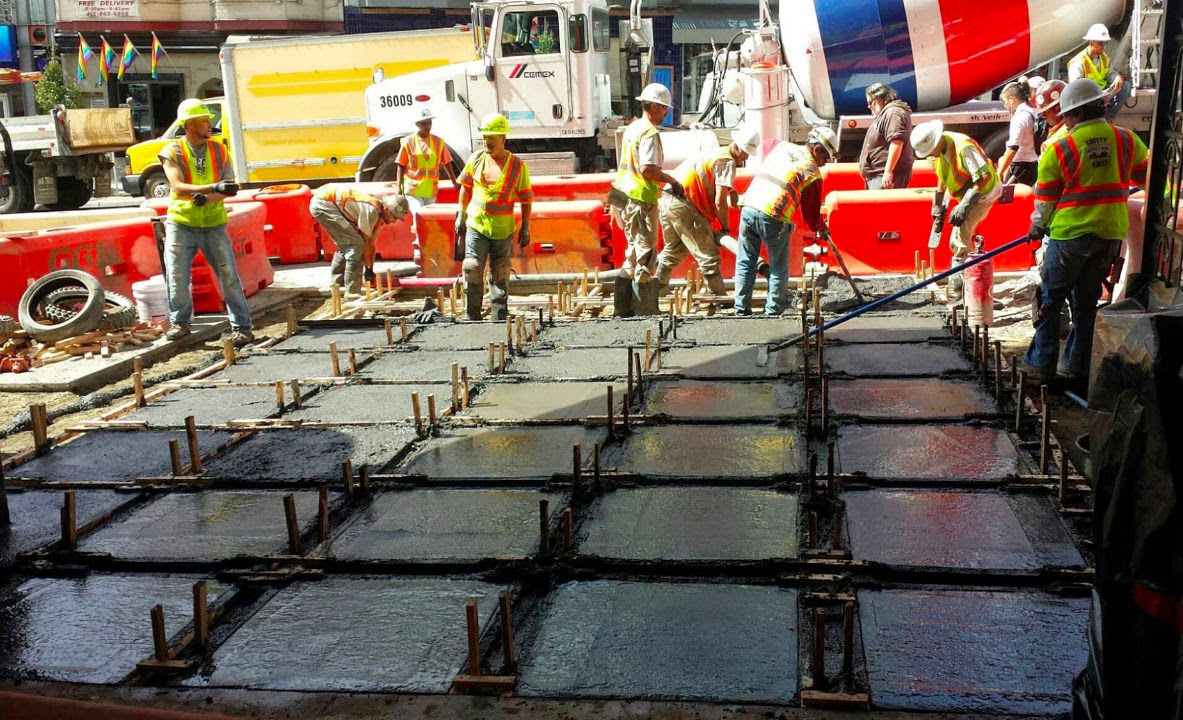 via DPW
San FranciscoCastro
About 1 hour ago