Nuala Sawyer/Hoodline
By Nuala Sawyer - Published on October 13, 2014.
San FranciscoDivisaderoAlamo SquareNoPa
As we reported last July, the Alouis Auto Radiator space on the corner of Divisadero and Grove is set to become a new condo building and set of retail storefronts.
Judging from the comments on our last article, the project is controversial among neighborhood residents, with criticism focusing on the new plan's aesthetic—which contrasts with the rest of the neighborhood's Victorian look—and on potential conflicts from noise-related issues that could arise from the neighboring Independent.
While the future of the space is a hot topic, it's time to talk about the business that has resided at that location for the past 62 years: Alouis Auto Radiator. A neighborhood institution longer than most residents can remember, some have wondered whether the family-owned and operated Alouis is closing its doors for good.
On that front, we've got good news: Alouis is not closing down, and it's not going far.
Thanks to a sign shoved between the bars at the old Divisadero location, we learned that the business is relocating just a few blocks away, to 1970 McAllister St. 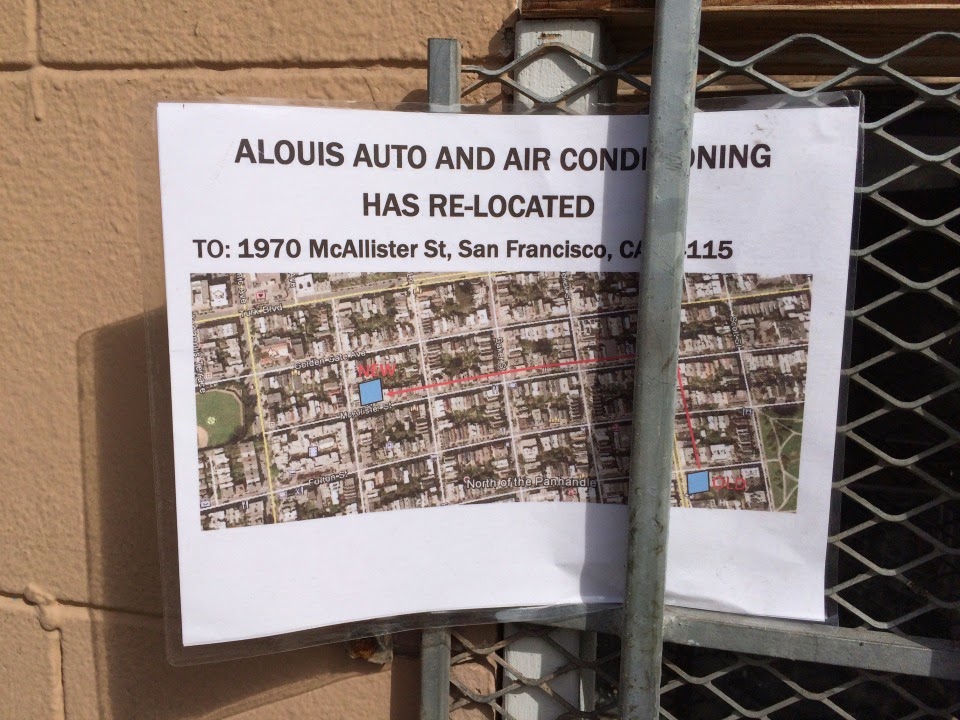 This new location, sandwiched between Central and Lyon streets, is no stranger to long-standing family-owned auto shops. Since 1986, it's been home to A & G Autobody.  Offering service in English, Spanish and Russian, A & G was first opened by Anatoly Glotov. His son Oleg Glotov now runs the space.
The two businesses will operate separately, but will share the same space, with A & G upstairs, Alouis downstairs. So for car owners looking for auto services, there are now two long-standing family-owned auto shops in the same handy location. For any car frame repair, paint jobs, or exterior repairs from fender benders, head upstairs to A & G. For radiator repair and car maintenance issues, Alouis on the bottom floor has you covered.
As for the old Alouis Auto Radiator space on Divisadero, we'll keep you in the loop as construction on the new condo building gets underway.
San FranciscoDivisaderoAlamo SquareNoPa
About 5 hours ago