Castro History Walk To Be Unveiled On Friday

Photo: Roy McKenzie/Hoodline
By Roy - Published on October 01, 2014.
San FranciscoCastro
Department of Public Works construction crews are currently laying down the Castro History Walk pavers and expect to be finished by Friday for a 6pm unveiling at Harvey Milk Plaza.
Not to be confused with the Rainbow Honor Walk plaques, these 20 concrete pavers are one of the final touches to the Castro Street Improvement Project and feature Castro area historical facts etched into concrete, from the early history of the area (when it was home to the indigenous Yelamu people) up to the present day, as the Castro became a beacon for LGBT people across the world.
The Castro History Walk starts chronologically at Harvey Milk Plaza, continues down the western side of Castro Street to 19th Street and comes back up the eastern side of Castro from 19th Street to Market Street.
"Each fact tells us something fascinating about the neighborhood," said Aiello of the Castro/Upper Market Community Benefit District, which funded the project. "Some will make you smile, but others will bring back emotional memories. History is not always pleasant, and we didn’t shy away from that."
DPW staff worked with the GLBT Historical Society to select the facts and released a draft summary over the summer that included 10 facts from the pre-LGBT era and ten LGBT-focused facts that begin in the 1950s.
The community provided feedback on the proposed facts to the CBD and DPW, which included a request to strike the name of Dan White, the assassin of Harvey Milk and George Moscone, from one of the pavers. "Strong arguments [to keep the assassin's name] were made on both sides," wrote Aiello, but in the end the CBD board voted to omit the name. The group also hired copywriters to check and double-check before the final language was sent to DPW to implement.
The CBD is hoping that the presence of the Castro History Walk will inspire people to investigate their own neighborhood. A digital version may soon accompany the etchings as well, noted Aiello, who said that "there are plans to develop some type of online information with more detail."
If you'd like to check out what all the historical facts are before the big unveiling this Friday, click here. Otherwise, we'll see you at 6pm this Friday, October 3rd for the unveiling.
In related news, check out this photo of the rainbow crosswalks that are being completed today. The rainbow stripes themselves are made from a hard durable material called DuraTherm, which should protect the rainbow crosswalks and keep them looking bright. 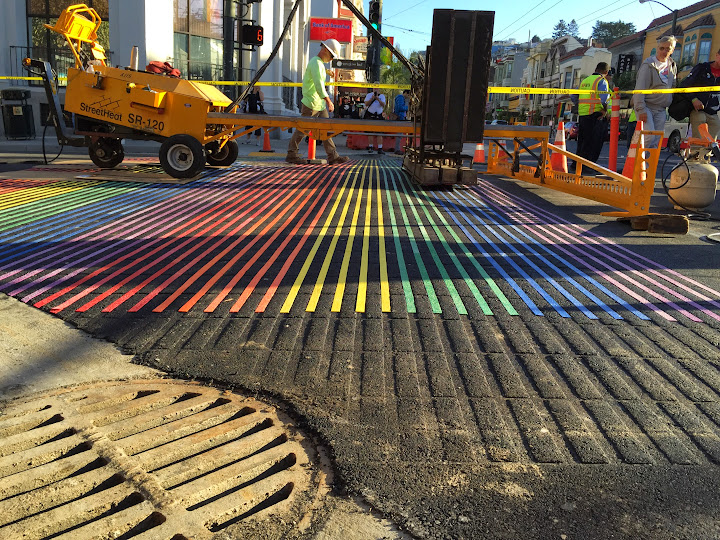