Photo: torbakhopper/Flickr
By Roy - Published on October 14, 2014.
San FranciscoCastro
If leather is your thing, or you're even just a little bit curious, you'll want to check out the Castro Gear Show happening this Saturday, October 18th from 6:30-8pm at Knobs in the Castro.
Current Mister Daddy's Barbershop Leather (MDBL) 2014 title holder Nile Eckhoff is behind the event. He's organized a coalition of Castro businesses including Daddy's Barbershop, 440 Bar, Knobs and Mr. S Leather down in SoMa to kick off the first annual Castro Gear Show in preparation for MDBL 2015.
Eckhoff, a Castro resident, says that the aim of the gear show is to attract younger people into the leather community. He sees a major disconnect between the "old guard" leather community and younger gay folks here in the Castro, and wants to bridge that gap. Eckhoff says that people in the younger gay community see leather as something for the older generation, while leather purists don't think that "neon sneakers and colored harnesses" fit into the leather mentality. "If we don’t open it up, it’s going to die off, " he said.
With the Castro Gear Show, Eckhoff hopes to demonstrate how young people can incorporate leather into all aspects of their life, whether it be at work, at the club, in the bedroom, or "under your pants." "It doesn’t have to be scary or inaccessible," said Eckhoff. "I wear a leather tie and leather boots to work most days. I work in a professional office."
You've probably seen Eckhoff shining shoes and polishing leather out in Jane Warner Plaza or in front of Bank of America at Castro and 18th over the past year. As part of his duties as a MDBL titleholder, Eckhoff has been bootblacking (the practice of cleaning and caring for boots and leather gear) for the past year, raising funds for Daddy's Barbershop's charitable giving campaigns and attending LGBT and leather-related functions to represent the Castro and city-wide leather communities.
Eckhoff wants to see leather return to the Castro despite its association with the SoMa area, "I'm a leather man," he said. "I live in the Castro, but a lot of people think of leather men as living in SoMa." 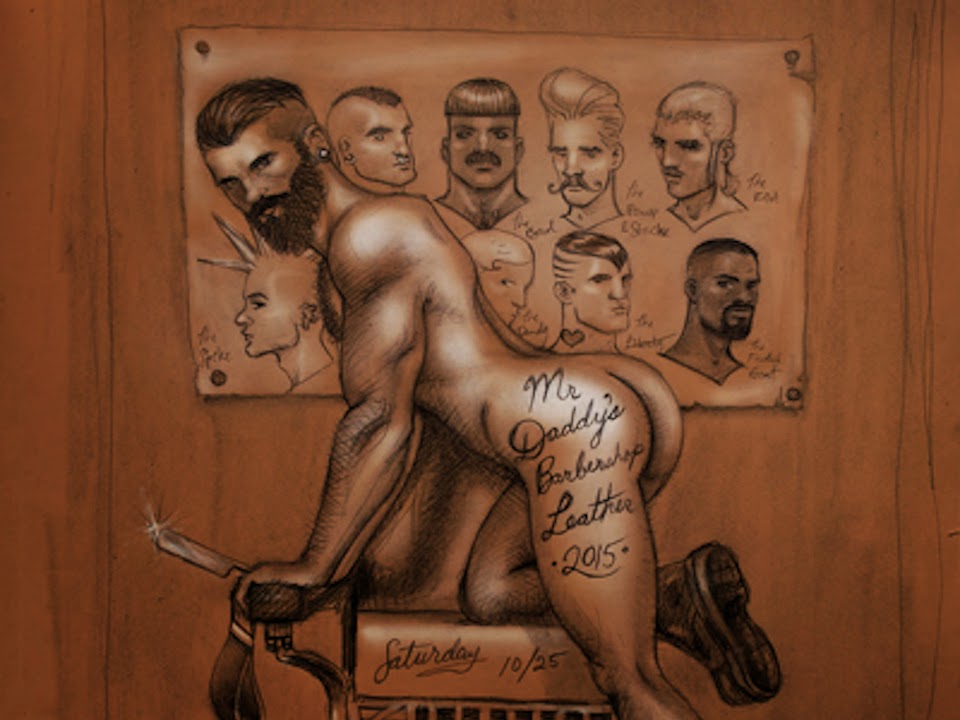 This weekend's gear show will feature local men decked out in apparel from gay-owned and -operated retailers, as well as serving as a signup opportunity for the Mister Daddy's Barbershop Leather 2015 competition on October 25th.
Eckhoff and Daddy's Barbershop have lined up some handsome models for the event, including Lee Vaughn, J Mark Jenkins, Jacob Juarez (Mr. April, Bear Chest Calendar 2015), Gage Fisher (first runner-up, Mr SF Eagle Leather 2014), Patrick Scofield, Michael Brandon, Julian Marshburn, Drew Sebastian, and Patrick Schofield. You could also walk away with one of many gift cards from participating local retailers, which Eckhoff earned through his bootblacking work.
So there you have it: men, beer, and gear will be converging at Knobs on Saturday evening. See you there.
San FranciscoCastro
Aug 05, 2022