Jared Schwartz/Hoodline
By Rose Garrett - Published on December 18, 2014.
San FranciscoHayes ValleyMid-Market
Back in March, we told you about 1564 MRKT, a collection of artists, woodworkers, designers and crafters all working on their own small businesses in one space.
The project was started by Cleveland Motley, who told us that he "needed to get out of the house" after starting a handmade bag company called Motley Goods.  He found the space, then brought in a cadre of other artists to collectively rent out the Market Street studio.
However, with the building in escrow, the workshop was always temporary, and now 1564 MRKT's members will pack up their letterpresses, woodworking tools and sewing machines in advance of a Dec. 31st closing date.
A 12-story condo has been proposed for the site, including, as Socketsite noted recently, 109 condos over three ground-floor retail spaces and a basement garage with parking for 28 cars and 110 bikes. An environmental review is currently underway for the proposed project. 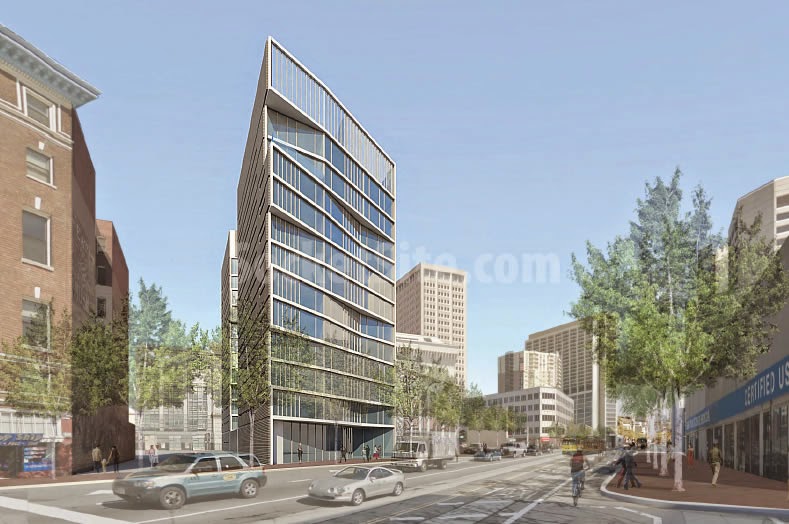 Rendering via Socketsite
Motley has been engaged in an exhaustive search for a new location for his business, which he said highlighted the growing challenge to maintaining small-scale creative projects in the city. However, Motley told us that he has managed to find a new location for himself and at least one other member of 1564 MRKT.
The new spot, located at Larkin and Geary, just might be the last semi-affordable space in the city, he said. "Realtors of San Francisco are happy I found somewhere, so they don't have to hear from me any more."
We asked Motley where the rest of the members of the 1564 MRKT group were headed next. "Most of them are going to Oakland," he said.
Motley and his crew will be holding a studio closing/holiday party this Saturday, December 20th at 1565 Market St. Starting at 8pm, the event will boast holiday decorations, kegs and eggnog, and your $15 at the door will go towards the new Tenderloin location.
San FranciscoHayes ValleyMid-Market
About 17 hours ago