As you may have heard, the SFMTA is in the process of gaining community feedback on its proposed changes to the 5-Fulton Line, which would affect both commuters and residents who live along the route of proposed changes.

We're now in the second phase of the 5/5L Muni Forward Project, which was developed as part of the Transit Effectiveness Program (TEP). SFMTA’s website describes the TEP as “the first major evaluation of the Muni system in 30 years,” which ultimately resulted in a series of recommendations distributed across the city’s transit system. The first phase of this project included implementation of the 5-Limited line, which consolidated approximately 20 percent of the bus stops, extended bus zones, and widened lane widths, among other changes.

According to the SFMTA, these first phase changes resulted in a 10 percent increase in ridership (approximately 2,000 daily riders) and a 15 percent reduction in travel time from 6th Avenue to Market Street.

In the second phase (which has not yet been finalized), plans include widening sidewalks at intersections and transit stops on Fulton and McAllister from Cole to Larkin through bus bulbs and installing traffic signals that assign transit signal priority to buses. 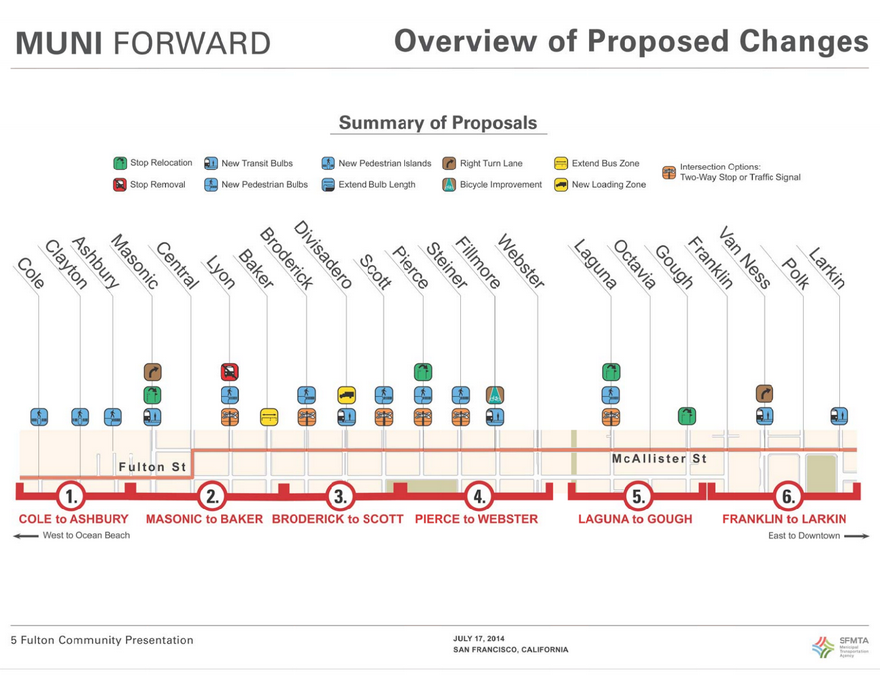 Pending approval, the SFMTA estimates a timeline to completion timeline of 18 to 22 months, which includes the design period, the process of obtaining a construction contractor, and the construction itself. The estimated capital cost for the proposed improvements totals $6 million and would be funded by Proposition A, which recently passed with 71.3 percent of the vote.

As part of its efforts to finalize the proposal, the SFMTA has conducted community outreach to gain feedback from residents. On November 5th, a community meeting was held at the African American Art and Culture Complex to examine the issues.

Among the changes discussed at the meeting was the suggested move to implement traffic light signals on McAllister from Baker to Steiner, at intersections which currently rely on four-way stop signs. Some residents who live along the McAllister corridor voiced opposition to this aspect of the proposal, which they feel will compromise the safety of pedestrians and bicyclists.

Gabrielle Tenaglia, a NoPa resident involved in a petition against the proposal, expressed a number of concerns related to the traffic lights. For example, she worries that drivers would speed up to hit the yellow light, which would pose an added risk to pedestrians. It also concerned her that two homes for the elderly are situated along this stretch of McAllister. According to Ms. Tenaglia, most attendees of the meeting were in opposition to the proposal.

Some residents had mixed feelings. Mark Ferinas of Alamo Square said, “Rapid transit is very important and I think Muni probably knows what it needs ... On the other hand, I understand lights on a narrow street like that would make things more difficult for pedestrian and ruin the small neighborhood vibe of the area.”

Regarding safety concerns, the SFMTA told us it conducted a study of 12 intersections in San Francisco that had transitioned from a stop sign to a signalized control. As part of the study, it analyzed five years of crash data before the switch to traffic signals and five years of crash data after, and found 30 pedestrian-related injuries occurred before signals were installed, and eight after.

The proposal is still being finalized, and to Hoodline’s knowledge, no meeting has yet been scheduled by the MTA Board to hold a vote. We'll keep you updated.

In the meantime, if you live in the area or commute using the 5, let us know what you think of the changes that have been completed, as well as the ones that are now being proposed.