Rose Garrett/Hoodline
By Rose Garrett - Published on December 20, 2014.
San FranciscoHayes Valley
Hayes Valley is prepping for a holiday lull, but there are still some tidbits of neighborhood news to share.
As you may have noticed, artists took advantage of a break in the rain on Thursday to work on the exterior mural on the building adjoining newly-opened Warby Parker (picture above). From the looks of it, the mural has been completed.
Plans are officially moving forward for the new mixed-use development on Octavia's Parcel T. The building, which is planned for the Octavia and Page streets,  is slated to have a mix of studios, one-bedrooms, and two-bedrooms, with an average unit size of 686 square feet. A rooftop garden, 13 residential parking spots, and 22 bicycle parking spots are also in the offing, though there's no further clarity on the tantalizing "beer hall" concept.
This news comes as Hayes Valley was defeated by the Excelsior in the first round of the Curbed Cup, Curbed's annual neighborhood-of-the-year bracket. Oh well.
In retail pop-up news, Gather is hosting a month-long pop-up by fashion designer Jamie Lau. This afternoon (December 20th) from 2pm-6pm, swing by for festive treats and champagne with Jamie and the Gather crew. "This will be your chance to meet the designer and learn more about her process and what inspires her work," said Gather co-owner Daisy McClellan. (541 Octavia St.)
Mixed Nuts is also getting into the pop-up game. Starting this past Thursday and going through Sunday December 21st, look for a Paz Collective holiday sample sale featuring sterling silver jewelry and natural-fiber scarves for your last-minute gifting needs. (227 Fell St.)
Meanwhile, the folks at Cary Lane have an exclusive offer just for Hoodline readers. Show this coupon (either printed or on your phone) during checkout, and you'll get 40% off any single item, from this coming Monday the 22nd until Sunday the 28th. (560 Laguna St., at Hayes.)
In food news, the parade of accolades keeps on marching for Souvla, whose french fries got a big league shoutout in Bon Appétit writer Andrew Knowlton's "best 46 things I ate this year" list, alongside nearby-ish Alta CA's fried beef tendon puffs.
Finally, there's change afoot over at Straw, where owners Ari and Maura Feingold have installed brand-new interior artwork that's not recommended for those afflicted by oulrophobia (fear of clowns). "We hired a local designer, Scott Johnson, to draw custom 'down a clown' art," Maura told us, noting that the new wallpaper was installed this past Monday. If you're in the mood for a donut burger, go ahead and check out the restaurant's new look. 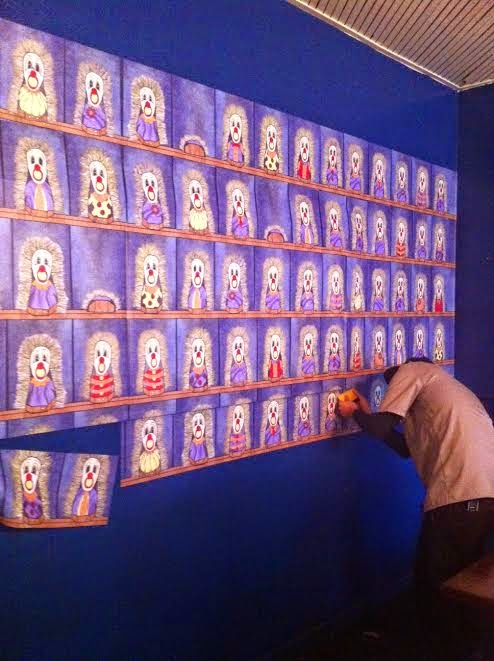 San FranciscoHayes Valley
About 12 hours ago