Photo: Stephen Jackson / Hoodline
By Nuala Sawyer - Published on December 04, 2014.
San FranciscoDivisaderoAlamo SquareNoPa
La Urbana, the "sophisticated cantina-style Mexican food" restaurant at Divisadero and Grove, celebrated its one year anniversary recently. Since opening its doors in August of 2013, La Urbana has been hopping, with indoor seating for 70, a private dining room for ten and a large adjoining informal garage used to highlight events like Taco Tuesdays and World Series games. There were even rumors of plans for a rooftop patio, which have yet to come to fruition.
The restaurant's seating capacity, however, seems to be growing. A sign posted in La Urbana's windows shortly before Thanksgiving notified the neighborhood of its intent to place 14 outdoor tables and 36 chairs on the sidewalk: 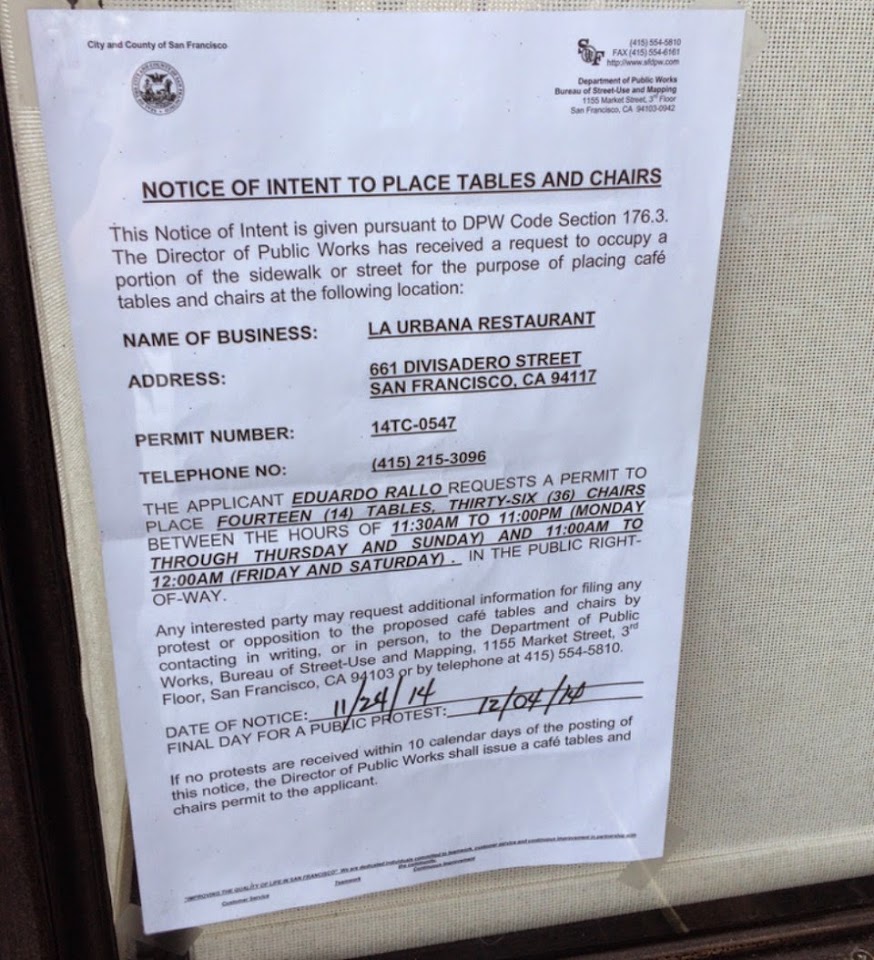 (Photo: Andrew Dudley / Hoodline)
"We are currently in the permitting process for outside seating," confirmed employee Lula Tilahun when we reached out to learn more about the plans.
However, the story doesn't end there. Thanks to a tip from reader Kevin L., we learned that neighbors (or at least one neighbor) are rallying against this latest La Urbana addition. The new Grove Residents' Rights Resource,  which has been formed recently to address issues affecting "tenants and homeowners on and around Grove Street and the Popeye's Gulch neighborhood," has issued a statement in opposition to this change to Grove Street's sidewalk.
Though its unclear how many members actually make up the Grove Residents group, it lists a long series of grievances about La Urbana, which range from "drunks screaming over the blaring music" to "employees and customers using our front stoops as their private smoking area, and arguing or getting high right under our bedroom windows, late into the night."
For this specific issue of sidewalk tables, concerns mostly circle around noise issues. The garage currently has seven tables, so there are fears that the 14 proposed outdoor tables would double or triple the noise. The application proposes that the outdoor seating will be in operation until 11pm on weeknights and midnight on weekends.
According to the opposition, six neighbors have already submitted complaints, but it's unclear how many complaints are needed in order to affect change. For non-Grove Street residents, they offer this plea:

"Even if their noise doesn’t bother you personally, please consider helping out your neighbors, many of whom are very bothered and at their wit’s end with La Urbana. There’s also a safety issue for children, sidewalk accessibility & safety issues for disabled people… there’s plenty of good reasons to oppose a big restaurant seating area on the sidewalk on our residential side-street, besides the noise it will create for the nearby homes."

The public hearing is being held today. If you've got concerns about La Urbana's outdoor seating plans, you can email modesta [dot] jacquez [at] sfdpw [dot] org or call (415) 215-3096.
San FranciscoDivisaderoAlamo SquareNoPa
About 5 hours ago

Matt Charnock
About 5 hours ago