Shipwreck/Facebook
By Lisa Gordon - Published on January 08, 2015.
San FranciscoUpper Haight
If you haven't yet heard about The Booksmith's Shipwreck, you've probably passed by and wondered about the raucous commotion at the back of the 1644 Haight St. space.
Shipwreck, a monthly event, happens the first Thursday of every month at the Haight Street bookstore, but you don’t have to be literary—or even to particularly like bookstores—to enjoy the event (though it doesn't hurt). Though not easy to describe, the words “erotic fan fiction” and "open bar" are generally involved in any discussion of the event, which has been growing in popularity since its 2012 debut (generally held at Booksmith, Shipwreck has an upcoming show at Elbo Room in April, as well as some shows in New York).
We caught up with Amy Stephenson, neighborhood local and Shipwreck co-creator (and, incidentally, a Hoodline Upper Haight editor), to learn more about the monthly event, which hosts its January installment tonight at 7pm. 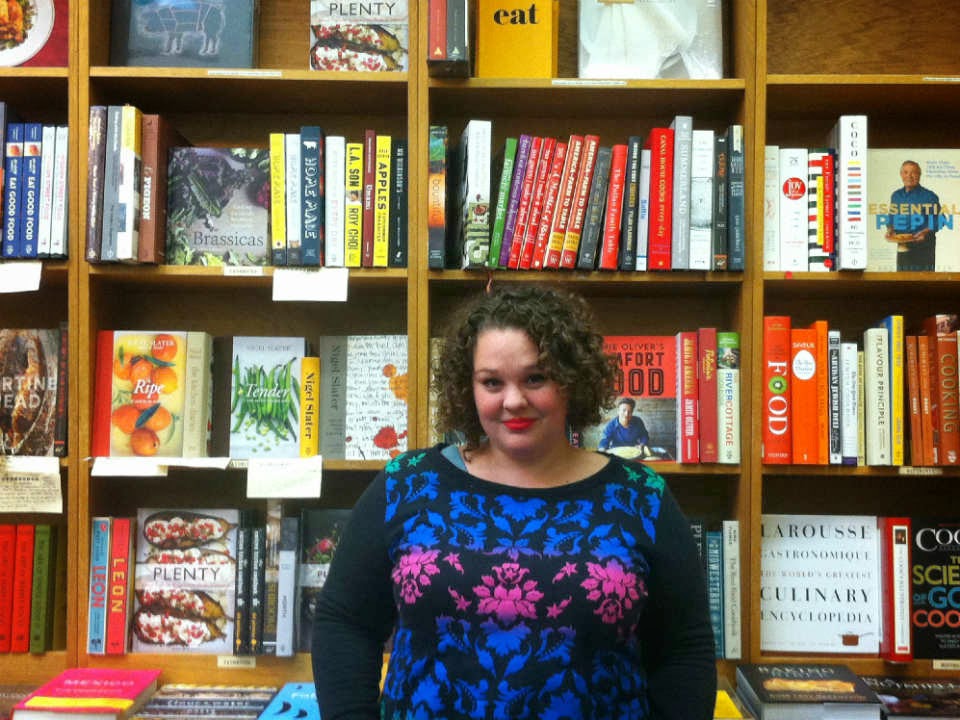 Photo: Camden Avery/Hoodline
How did the whole thing come to be?
"I had done some events with Casey Childers, who runs and helped found Write Club in San Francisco. We became friends through the literary scene in SF, and we had a few beers—and then a few more beers—and then had this idea that if we could do an erotic fan fiction competition it would be hilarious. And it was just one of those jokes that we accidentally followed through on."
So the participating writers are local?
"We have local writers. Some with books, some without books, some are just bloggers we love or people we know who are funny; we’ve literally picked people just because their Twitter accounts are hilarious."
And how does it work?
"It’s the first Thursday of every month. We pick a book every month, either one that we just love and is classic, or is just in the zeitgeist for whatever reason, and we assign each writer a character—they don’t get to pick. And then they write 800-1200 words of fan fiction about that character, or heavily featuring them or centered around them. They can do anything they want. Whoever wins gets to come back. The structure of the show is that there are six readers total, and they’re all read by our 'thespian in residence,'  currently Baruch Porras-Hernandez, and the audience gets to vote."
So it’s not specifically erotic fiction? Or it is?
"It generally is erotic. That’s part of it. And it mostly winds up being lots and lots of dick jokes. But they really can do anything, and people have done really clever stuff. People get really creative."
How do you get writers?
"Most of the time people are coming to us. We’ve been doing it now since June of 2012, and when we first started we were chasing down writers and it was hard to find them, there a couple who were really excited but mostly it was us being like, 'please write for our weird show that we can’t even explain yet.' And now, we are inundated with writers; we’ve had to turn people away."
Have any turned out to be not good?
"There have been a couple that have been duds, but it’s fine because the audience gets to vote, so you get immediate feedback of what worked and what didn’t work. We’ve had some writers try to go really 'cutesy' and it’s just not that kind of crowd, so often that doesn’t play. But mostly it’s just rowdy, and there’s an open bar, so people are just there to laugh."
Really? Open bar? Now you’ve got my attention.
"Yeah it’s 10 bucks for an open bar, which is pretty good in San Francisco. We get good stuff!"
Were you nervous about the first couple shows you had?
"Oh, we were terrified. When our first shows got a 60 percent turnout or whatever, we were like, phew! That’s over, pressure’s off, I guess we don’t have to worry about next month. But then next month was bigger, and the next month was bigger, and now we’re selling out every show."
What are your hopes for the show?
"Our big goal is to be able to pay our writers, because that’s super important to us. We’ve been playing with guest readers. We’ve been trying to step into getting big-time guest readers to fill in, so we just did one in November where we did A Series of Unfortunate Events [by local author Daniel Handler] and as a big surprise, Daniel Handler came out and read erotica to 200 people based on his own children’s series. So we’re trying to do that, and I think the show is finally getting big enough where we can do that and not have to lean on it for marketing. What was so cool about Daniel Handler was that it was a surprise. Everyone went apeshit. So that’s what I want—to pull big surprises like that." 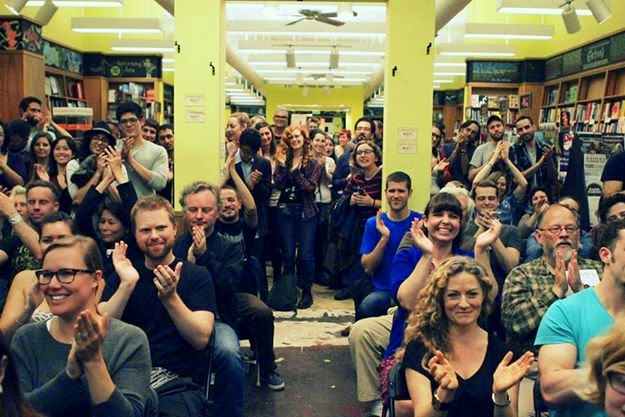 Shipwreck/Facebook
How do you get people to come? How do they find out about it?
"We’re on Facebook, we’re on Tumblr. But most of the action is on Twitter—if you search for #shipwrecksf on Twitter, there’s a huge faction of people who live tweet every show because they love it. There are a lot of really good “hit ‘em out of the park” one-liners that just bring the house down. Plus, the fan fiction community started online, so it kind of markets itself."
I wandered in once—I think to just buy a book—and I saw that there was something happening back there, and it was rowdy, and I heard laughter, and I had no idea what was happening.
"It’s really fun when people wander in. I sit facing the audience because I’m doing the emcee thing, and it’s fun to watch people wander up and try to figure out what’s going on, and the first really dirty joke lands and they’re like, 'what?!' But a lot of people also just see it on the sandwich board out front and think, 'oh, I have to go to that.'"
So the authors sit right there, in the line of fire?
"They have to sit there while their pieces are being read and not give away that it’s theirs. I find that you can usually watch the person that’s laughing the hardest at the jokes because that’s the person who wrote it. Everyone laughs the hardest at their own jokes, probably because they know they’re coming. They squirm and hide under the table and they can’t even deal with it. But they know what they’re getting into.
"It’s the magic of the show when you cram 200 people into a bookstore—which is half of the children’s department—and give them this really gross stuff, they don’t know what to do with themselves. So to have the writers laughing or showing them that it’s okay to be weird and laugh hysterically or get really drunk or whatever you need to do to get through the show." 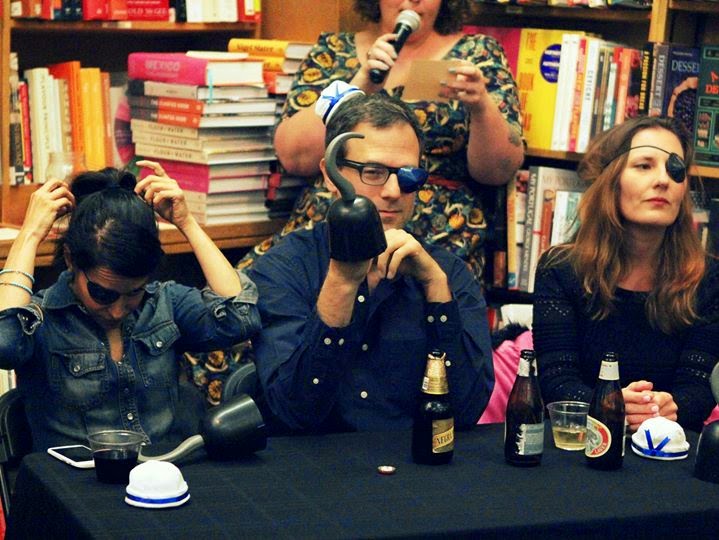 Shipwreck/Facebook
Have you had lots of high-profile authors participate?
“We’ve had some New York Times best-selling authors sully their reputations,” Amy says. Some of the better-known authors include Kelly Link, Andrew Sean Greer, Scott Hutchins, John Scalzi, Holly Black, Daniel Handler, Michelle Richmond, Mac Barnett, Kate Leth, and more. Amy says that childrens’ authors often do the best. “I don’t know why, it’s really weird.”
What do you want people to know about the event?
"Even though it’s at a bookstore, it’s not intimidating, it is extremely democratic, and even if you haven’t read the book. We’re doing Ayn Rand this week: who’s read Atlas Shrugged? Nobody has! I read the thing because that’s my job, for the show, but nobody has read this thing. It doesn’t matter. It’s fun. That was my goal, starting out: a social event in a bookstore that is not intimidating, and that you don’t have to be super smarty-pants to attend."
Tickets for tonight's event are still available here, although reserved seating is sold out, and seating is now first come first served. And Twihards take heed: next month's event, held on February 5th, will feature fan fiction based off of Stephanie Meyer's Twilight books.
San FranciscoUpper Haight
Oct 22, 2021