The Saga Of The Central Divis Playas

A memorial for Richard Barrett, killed in 2008. (Photo: Janet/Flickr)

Gang crime is usually hidden from most of society, but it wasn’t on Friday night. Police now say that the mafia-style murders of four men at Page and Laguna are gang-related, and they're still looking for suspects. Little else is publicly known at this time.

But there is a rare look into modern San Francisco gangs, in the form of a story that's been making its way into the public realm. It’s about the Central Divis Playas, a gang operating in the Western Addition and Fillmore that's now facing federal racketeering charges for a series of murders and other criminal operations over more than a decade.

We’ve pieced together the saga through court documents and hearings. While we’ve spoken with law enforcement and nearby residents, no one would discuss the CDP or their alleged activities with us on the record.
Ten men and one woman have been accused of membership in the locally infamous CDP, also known as 237 (the numbers corresponding to CDP on a telephone keypad), D Block, and a host of other monikers.
The members stand accused of conspiring to commit four murders (in aid of a continuing criminal enterprise), and a series of other charges typically associated with organized crime: pimping, extortion, weapons possession and use. 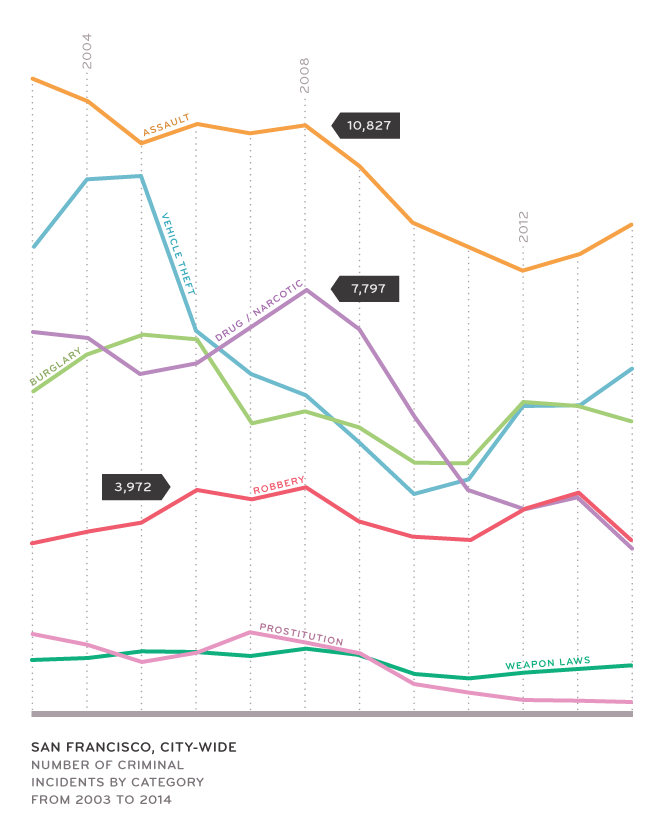 Operating for about two decades, the CDP's members are expected to protect the gang’s name and reputation using “any means necessary,” which often includes intimidation and violence, federal prosecutor William Frentzen wrote in one filing.
The crew makes themselves known by raising two thumbs, knuckles pressed together, forming a “U” shape (for Uptown, one of its other nicknames), or by making a “c” and “d” shape with their hands. The feds say that some CDP members get tattooed with the gang’s various names, as well as posting on social media and writing graffiti within the area the gang claims as its territory. Though the exact parameters of the CDP's territory are unknown, the gang is headquartered near Baker and Grove, according to Frentzen.
Gang members earn money in part from low-level associates selling drugs — historically coke, crack and weed — pimping women (sometimes minors), and committing robberies. Upper management, known as “shooters” or leaders (with no formal title), are mostly responsible for the violence and intimidation that feds detailed in a laundry list dating back to 2002.
The Investigation
The investigation kicked off in 2012, when prosecutors began looking into the murder of a Los Angeles pimp named Calvin Sneed — a murder that unfolded after a couple with ties to the CDP allegedly used its vigilante assistance to protect their daughter Leticia.
The parents, Barry Gilton and Lupe Mercado, allegedly lured Sneed to their doorstep in the Bayview, and with the help of CDP members Antonio “TG” Gilton and Alfonzo “Fonz” Williams, gunned him down in June of that year. The couple has pled not guilty.
Sneed got involved in the family's life after the couple had sent Leticia to live in Los Angeles with Gilton’s cousin, Antonio (also known as TG).
Once Leticia moved to LA with Antonio Gilton, she started to work for a marijuana dispensary called Happy Days, which used to operate in the Western Addition. William Frenzten, the federal prosecutor, has accused the owner, Jeff Hunter, of having ties to the CDP, and claims that Happy Days’ LA incarnation is also a brothel and a hub for other illegal activities.
“Happy Days is ... basically ground zero for Hoover Cripps,” Frentzen said in court, referencing the notorious LA gang. And Happy Days is where Leticia, then a teenager, met and associated with Sneed, the pimp.
Word that Sneed was beating Leticia and forcing her into prostitution got back to the girl’s parents, who allegedly first tried to stop the abuse by killing Sneed in LA. After failing to hit the pimp with gunfire — his car got shot up — the parents fled back to San Francisco where they conspired with Fonz of the CDP, according to Frenzten.
The Giltons, Fonz and Mercado allegedly shot and killed Sneed that June. 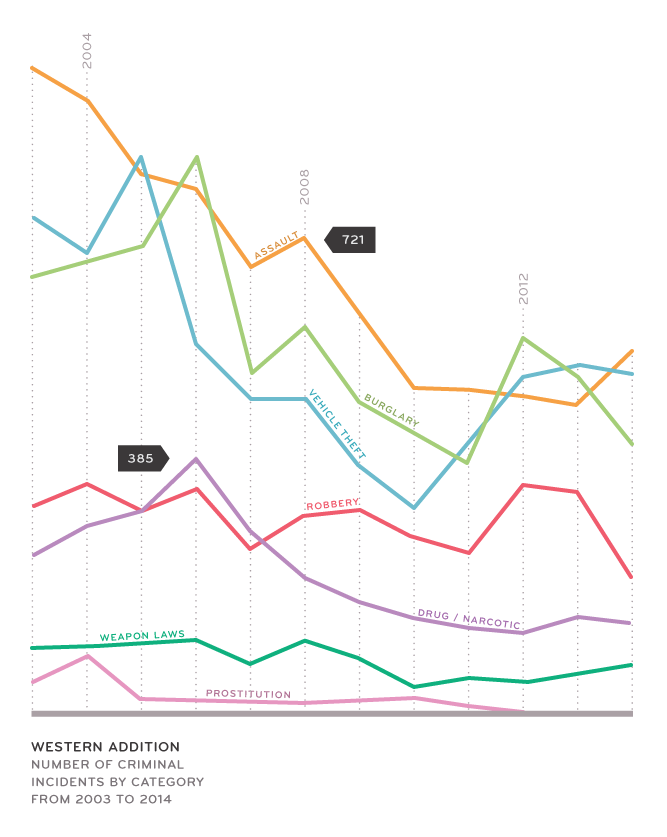 Following Sneed's death, the government started to look back into other criminal activity that the CDP may have been involved with – subsequently charging alleged CDP members Reginald “Fat Reg” Elmore, and Charles “Cheese” Heard with the double murder of Isaiah Turner and Andre “Baby Bin Laden” Helton. The feds haven’t yet specified whether the victims were also in a gang, or other circumstances surrounding the 2008 deaths at the University of San Francisco’s Lone Mountain Campus. But, the government did say that Fat Reg and Cheese murdered the two men to further their criminal enterprise.
Gold-toothed Cheese is already in prison for the 2008 murder of Richard Barrett (who himself may have dabbled in transgression, appearing on the SFPD’s wanted list in connection with an attempted homicide) during a robbery dubbed the “Bamm-Bamm Bling” by local media. It happened outside of a North Beach club called Fuse, when Cheese attempted to steal a pendant depicting the Flintstones character “Bamm-Bamm.” Barrett resisted and tried to run, at which point Cheese shot him twice in the back, prosecutors said at the time.
During Cheese’s trial, members of the CDP stood and bared their gold teeth at one of the government’s witnesses, a Texan tourist, who claimed she’d witnessed the robbery-turned-murder during a visit to the city. At the time, Cheese’s defense attorney claimed the courtroom act was to compensate for an unfair identification process, but prosecutors called it “out-and-out intimidation of a witness.” Several of the men who stood ended up being penalized for parole violations, according to Frentzen.
The fourth murder the CDP has allegedly committed in recent history took place at a club in the Marina District in 2010. Close to midnight, alleged CDP member Jaquain “Loc” Young burst into what was then a club called the Gravity Room, and gunned down Jelvon “Pooh Bear” Helton.
At the time, law enforcement believed Helton to be an active member of another Western Addition gang known as Knockout Posse or KOP. The KOP and the CDP were warring for unknown reasons — though it’s worth noting that in recent years the CDP has been in conflict with any number of its known rivals, including Eddy Rock and Page Street Mob.
In addition to the men the CDP allegedly murdered, the feds say that CDP members Adrian “Tit” Gordon, and Esau “Sauce” Ferdinand tried to kill two unnamed victims on separate occasions in 2011. Paul “P World” Robeson has also been charged with pimping.
The CDP defendants are scheduled to appear in court on January 23rd for a motion hearing. You can read the most recent indictment, which details the government’s accusations, here.
The Context
The Central Divis Playas are only responsible for a fraction of the crime in the neighborhoods which they purportedly claim as territory.

You can get a sense for the other two groups mentioned above via these injunction-zone maps provided by the city attorney. (Gang injunctions are a controversial legal tool employed by cities to curtail gang-related activities.)

Most crime rates associated with gang activity have steadily dropped over last decade in San Francisco, based on data from the San Francisco Police Department*. This includes the affected areas of Western Addition. 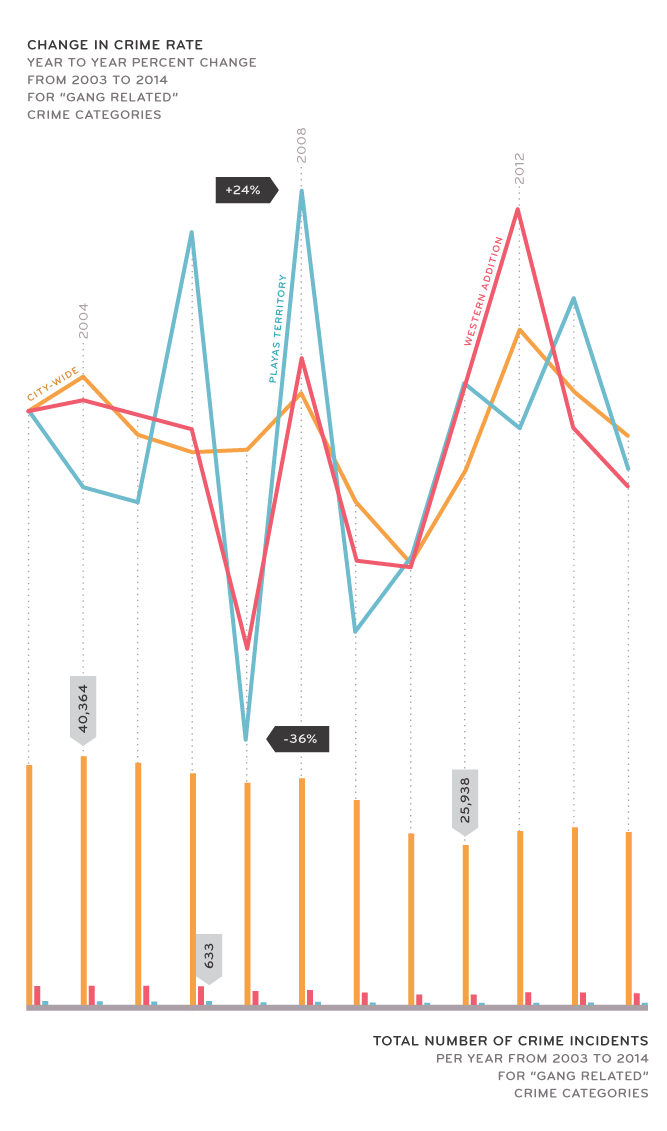 The drop in crime mirrors national trends, but is also partly related to the rapid gentrification of San Francisco. Gang members have been forced into the East and South Bay, according to sources in law enforcement. And yet, even as crime drops, you can see gang-related crime rate changes fluctuating fairly evenly, indicating that the overall gang problem remains unresolved.
Lack of opportunity remains for many in Western Addition, as in other parts of the Bay Area. In parts of area neighborhoods, like where the CDP took root or where Friday’s shooting occurred, there are still not many options if you didn’t move in with them. A few people, allegedly including the CDP and whatever gangs may have been involved in Friday’s shooting, go the criminal route.
Systemic discrimination inherited from earlier eras of this country’s history, combined with troubled San Francisco and Bay Area efforts at housing and redevelopment, the education system, the war on drugs, and other societal problems, have created a difficult environment for many.
Although there may be no easy solution for gang violence, there are those who seek to create change, including many nonprofits, community centers, and individual efforts. One initiative, the Western Addition Neighborhood Access Point, is trying to connect more people with job opportunities. Another, the Western Addition Community Technology Center, is working to improve skills around higher-paying jobs. Even the tech industry, which has its own history of inequality,  has companies in the city starting to develop their own community assistance programs.
If you know of an individual or organization that's working to combat problems and make positive change in the neighborhood or in the city, let us know in the comments and we'll look to surface their stories in the coming weeks and months.
*Note: the numbers in these charts come from a data set going back to 2002 provided by the San Francisco Police Department, that may not be fully accurate and is not totally up to date. The data set has recently become unavailable for reasons that are unclear but may be related to questions about conflicting numbers raised by the SF Weekly (we’re awaiting word back from a department spokesperson).
Data analysis and charts by Robin Peeples.
San Francisco
About 5 hours ago