At a public hearing this afternoon, the SFMTA Board of Directors unanimously approved the proposed Area Q residential parking permit zone.

As we recounted last week, the proposed parking zone stretching from Webster to Masonic has been in the works for more than two years. After a series of community meetings and subsequent revisions in recent months, the proposal finally reached today's decisive vote. 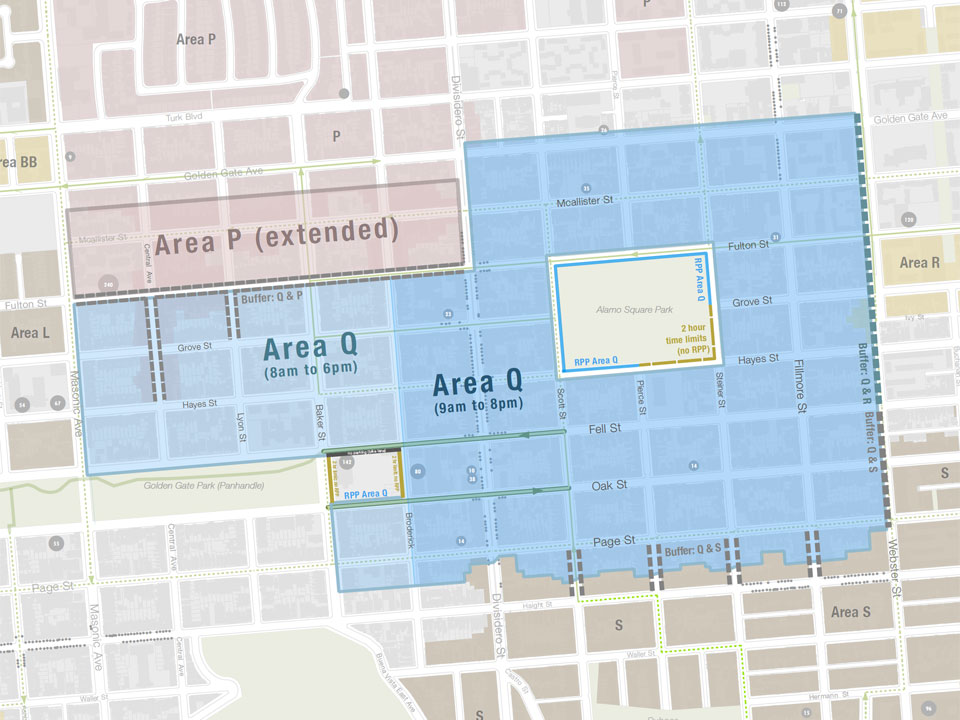 Turnout at today's hearing was high — so much so, in fact, that attendees took to sitting and standing on the sides of the hearing room (at least until a warning about the fire code was raised).

During the public comment portion of the proceedings, a representative from the Alamo Square Neighborhood Association said that membership of his group was divided roughly 60 percent in favor of the proposal, and 40 percent opposed.

Supervisor London Breed's aide Conor Johnston corroborated that 60/40 breakdown, saying it jibed with what he felt was the sentiment of residents in the area. When asked by the Board whether Supervisor Breed had specific concerns about the proposal, Johnston cited "some process issues," such as the cost of single-day permits versus multi-day permits. He said that if the city is serious about promoting transit-first policies, they should make it easier for people who don't own cars to engage in alternatives like car-sharing via affordable single-day permits.

Dozens of local residents then spoke about the RPP (Residential Parking Permit), roughly evenly split between those in favor and those opposed.

Of those opposed, many bemoaned the process itself. Some claimed they were not informed about the process until very recently, or that the RPP process was very difficult to stop, relative to how easy it had been to initiate.

Others expressed concern about the specifics of Area Q, like the hours that the parking restrictions would be in effect, and the exclusion of the area south of the Panhandle.

After public comment, one member of the Board asked if there were any accommodations for hardship concerning residents who couldn't afford the $110 annual permit. The answer was no. Another question was raised about how businesses in the RPP zone would be affected. A rep from the SFMTA told that Board that all businesses in the RPP area could purchase one permit for a personal vehicle, and up to three additional permits for vehicles registered to the business.

The area south of the Panhandle was also a subject of discussion. The SFMTA said they had originally included the area in the RPP, but removed it after objections were raised by the Haight Ashbury Neighborhood Council (HANC).

A Board member asked about cultural facilities like churches, and how their congregations might be facilitated. The SFMTA acknowledged that the two-hour parking regulation could create a hardship for such institutions, and that the hours could be extended on those specific blocks to three or four hours. Specific aspects of the RPP can be amended after it is approved.

"RPP is a dynamic tool," the SFMTA rep said. "It can be changed."

In the end, the Board voted unanimously to approve the zone.

An SFMTA rep said that the RPP won't go into effect until the Fall, so tweaks to the specifics (such as time windows for spots in front of churches) can still be addressed in the months ahead.