Upper Fillmore Independent Retail: A Victim Of Its Own Success?

Editor's note: We collaborated on this article with The New Fillmore, the monthly newspaper of the Fillmore District and Upper Fillmore neighborhoods. You can find the latest print issue delivered to your door if you live in their circulation area. You can also check for updates from them on newfillmore.com.

Why have so many luxury apparel chain stores opened in Upper Fillmore over the last decade? Beyond the general economic growth of the city, our findings suggest that the success of independent retailers had created an especially attractive environment for them.

High-end independent apparel stores began opening up decades ago. The ones still operating on the street today started to get going in the mid-90s and began to boom around ten years ago.

Luxury chains began to show up en masse around this time, and in the last five years they’ve come to visibly dominate the category. 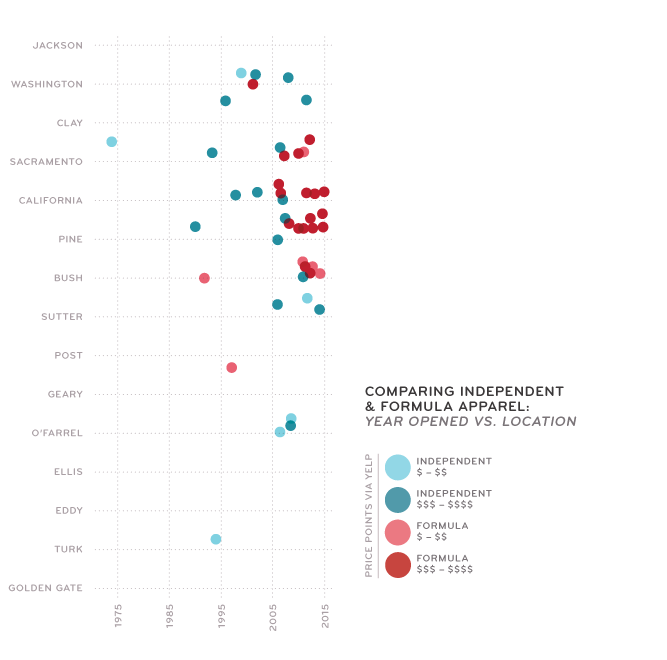 One can think of many factors at play here, and certainly the topic deserves more analysis.

For example, there is presumably more money in the neighborhood in the past ten years, as this era’s tech economy has continued to expand. And with this success putting San Francisco on the map with a broader audience, there are no doubt more companies looking to find local customers in new ways.

But why luxury apparel in Upper Fillmore?

Union Square, which many local have seen as the most natural home for these brands, is already packed, and it’s a tourist trap with top-dollar rents. Previous articles in The New Fillmore and elsewhere have quoted luxury retailers who say they’re looking for something more intimate.

Commercial corridors on other neighborhoods main streets, like Valencia in the Mission or Divisadero, have become more prominent symbols of new wealth flooding in. Why don’t these stores go there?

Hoodline has previously analyzed Divisadero, and one can see a booming high-end restaurant scene unfolding there in the last decade. But pretty much no high-end apparel. 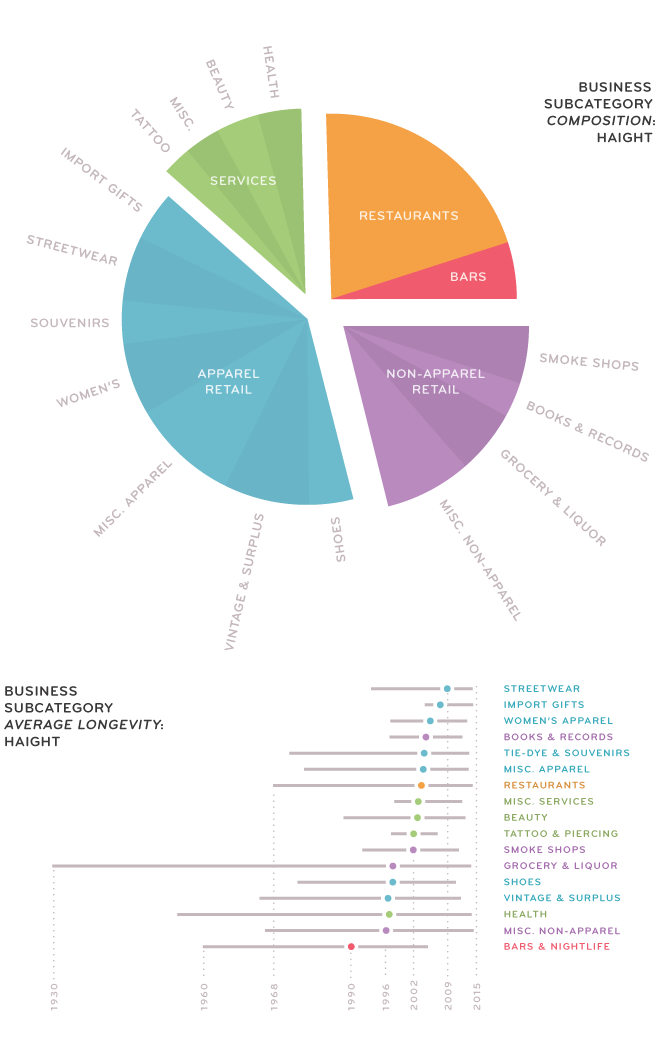 Why not Upper Haight, the home (according to one study) of the most single millionaires in the city? That neighborhood has actually gone through major apparel-trend changes, too – but in a very different direction from women-oriented fashion of Upper Fillmore. In addition to the Haight’s long-running hippie threads and vintage shops, it has recently added more than a dozen shops of the streetwear-skater-surf-weed-culture category. In interviews we’ve done, proprietors of these stores see themselves as continuing the 60s tradition, albeit in a way that the original hippies often don’t recognize.

It’s something like Upper Haight’s brand-name that we suspect has been shaping Upper Fillmore’s retail changes. A big difference, though, is that Upper Haight has lots of retail space that turns over quickly, so the new generation of counterculture apparel is getting layered on top of the existing ones (however awkwardly). 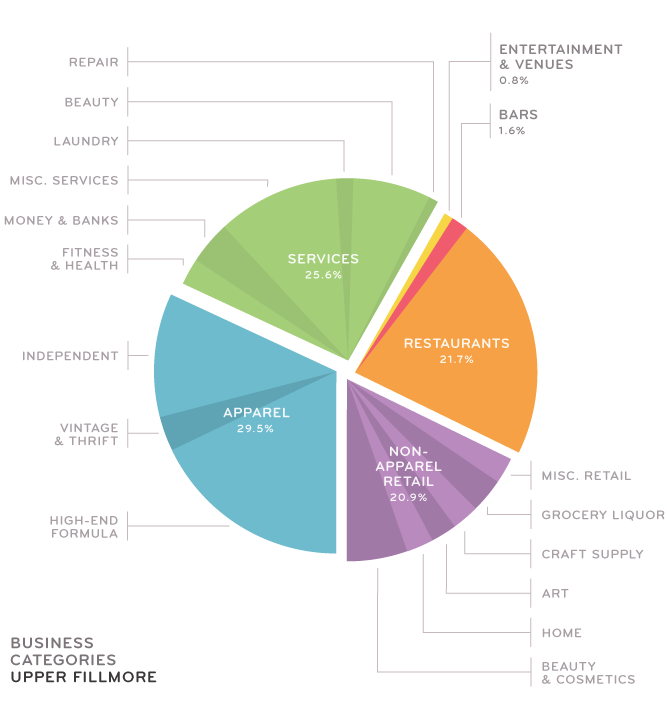 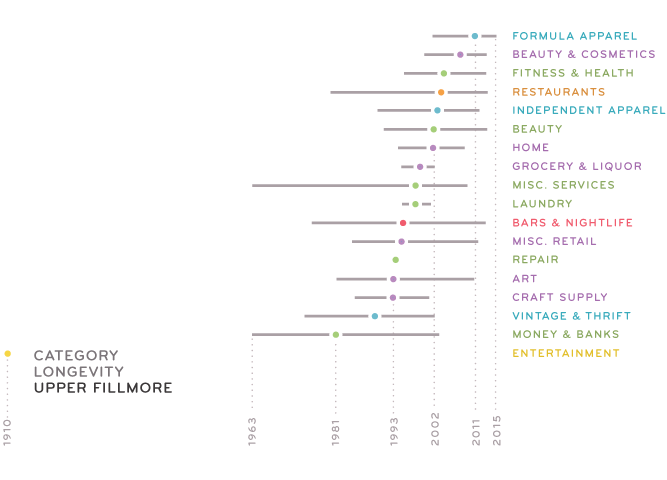 Upper Fillmore just doesn’t have that much space to fit the demand. For a variety of historical and architectural reasons, the quaint Victorian storefronts aren’t available south of Bush. Stores catering to wealthier crowds generally stay above it. The number of restaurants in the neighborhood hasn’t changed much, but you can also see the corresponding increase in prices within the geography.

To illustrate this broader shift, the chart below shows both formula retail and restaurant price tiers over the decades along the main commercial stretches of Fillmore Street, for businesses still open today. 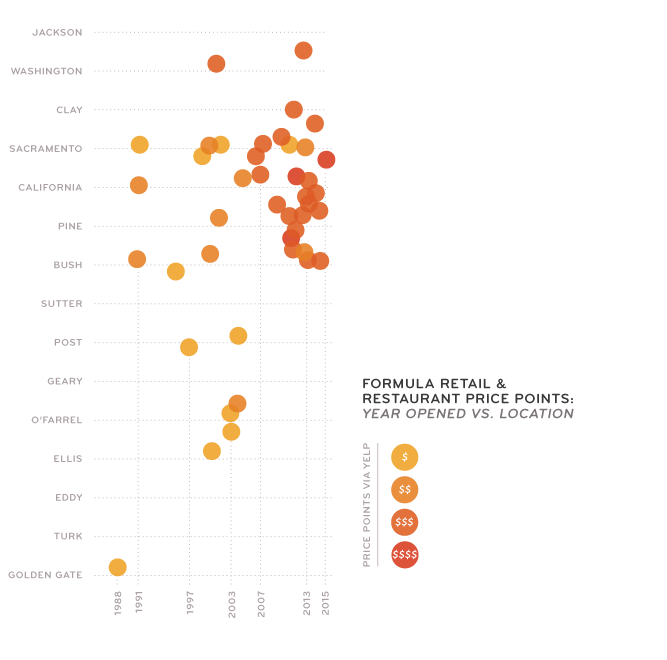 In article after article we reviewed, luxury chain managers said that Upper Fillmore was the place for them, with some opening stores only in the neighborhood and nowhere else in the city. But usually they were vague about the reasons. They didn’t come out and say that they’d seen the evolution of the street’s independent apparel scene, and decide that they wanted in on the customer base.

As we were studying this issue, a countertrend also became clear. Upper Fillmore still has a large number of older businesses of all types. If you set aside the apparel situation, you can see decades-old establishments like what you find in less central, seasoned city neighborhoods, like the Inner Sunset. We’ve made a chart to illustrate how the newest stores fit in. 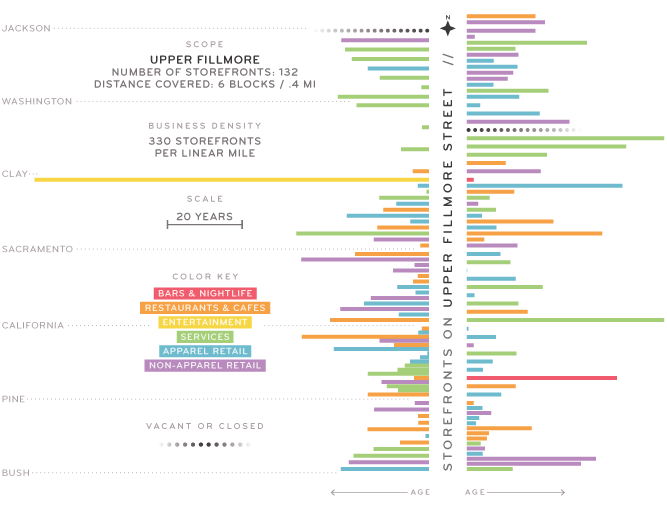 The neighborhood, in the view of some, may have lost many beloved older shops. But perhaps the combination of loyal customers, benevolent landlords and the increasingly strict formula retail restrictions will limit the scope of future turnover.

We also took a look at the lower part of Fillmore, south of Bush, for context. The area unfortunately reflects the decades of failed experiments in urban redevelopment. Vacancy rates are higher, as shown by the dotted lines. Large portions of the blocks are dominated by blank concrete walls, and the decline in density of shops is unmissable when you compare the two charts. 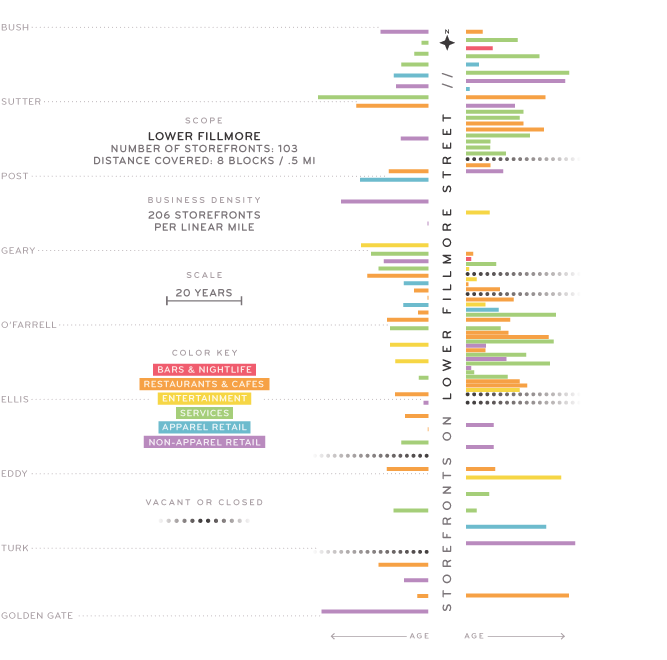 And yet, service businesses and restaurants have still managed to cluster together, particularly near Geary. New commercial zones remain underdeveloped, like the old Muni substation building, or the McDonald’s. 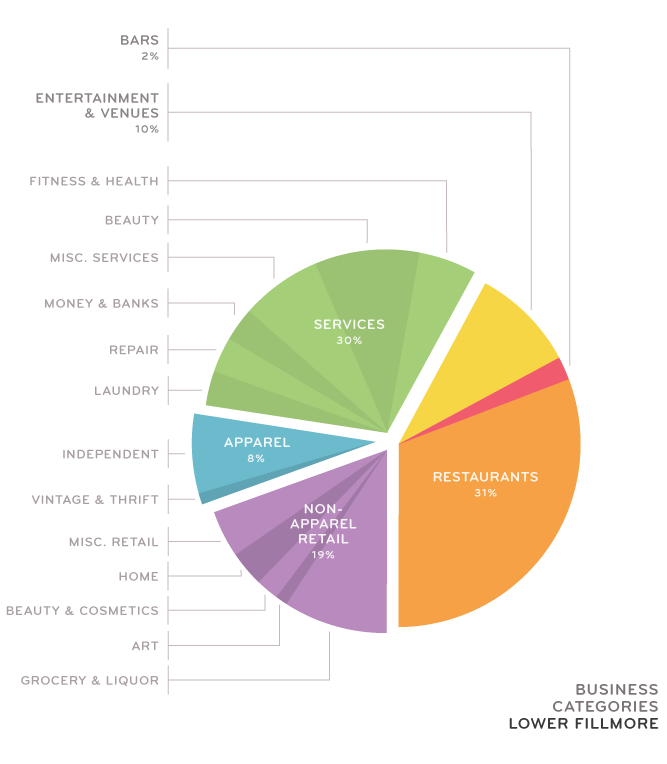 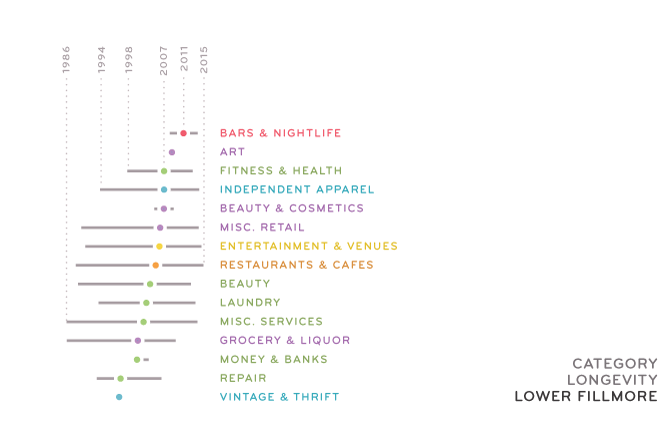 As Upper Fillmore neighbors debate the blend of local businesses and formula luxury, the residents further south have more room to try to create something better.

San FranciscoFillmore
About 16 hours ago