Since 2011, there's been talk of installing medians to separate bike lanes from traffic along Fell and Oak streets, which link the Panhandle and Golden Gate Park to the popular commuting corridor the Wiggle. Construction on the medians began in February of this year, coinciding with the building of rain gardens, sewer replacements, and sidewalk bulbouts. And now, residents and commuters both will be relieved to know that the construction madness along Fell and Oak streets has reached its conclusion, as medians on both streets have finally been completed. 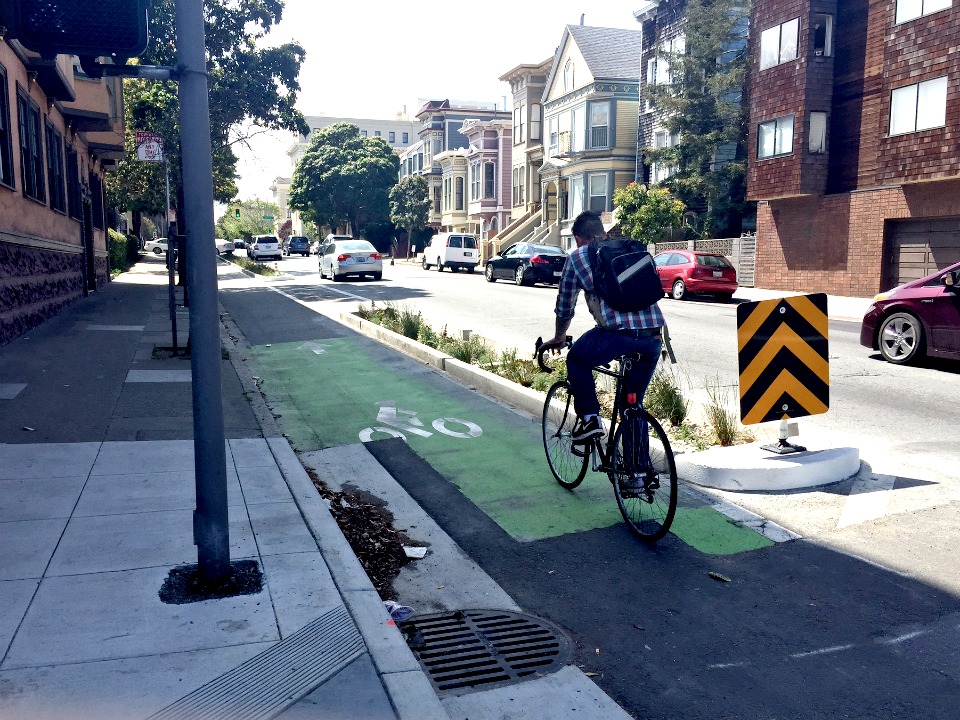 The newly-installed bike medians run westward along Fell Street between Scott and Baker, and eastward on Oak between Baker and Scott. The placement of each median depends on garage entrances and traffic turn lanes, with the longest-stretching median running along Fell Street near the Panhandle (see top image).

Safety has long been a concern for cyclists commuting through the neighborhood, and a recent map released by the Vision Zero campaign shows that the intersections at both Fell and Divisadero and Baker and Oak streets are neighborhood hot spots for cyclist injuries due to collisions. The recently installed medians aim to help clarify lanes for both drivers and cyclists, and increase safety along the busy corridors overall.

And if the medians along Fell and Oak seem like a big change, prepare yourselves: plans are in process for a massive redesign of the Wiggle which could include building sidewalk bulbouts, removing parking spaces to "daylight" intersections, and preventing southbound traffic from entering Scott Street at Fell.

How do you feel about the medians along Fell and Oak streets—do they make you feel safer as a driver or a cyclist?

San FranciscoDivisaderoLower Haight
Less than a minute ago

San Francisco and Santa Clara counties are both offering up a chance to score sports or other event tickets to people who get the COVID-19 vaccine. Read More