After months of construction and frustrating delays, the neighborhood's rain gardens have finally been completed. Noise, construction equipment and lane closures related to the project are finished, and a few shrubby plants can be seen poking out of the rock-lined gardens located at Fell and Divisadero, Fell and Baker, and Baker and Oak streets. 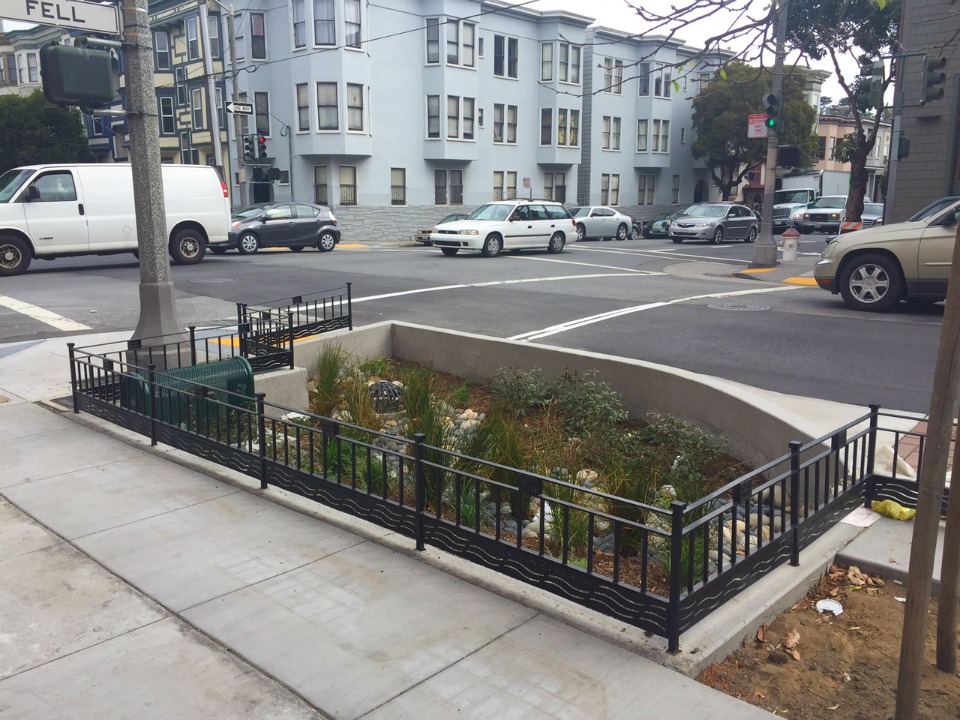 The rain gardens are not only designed to add a bit of greenery and drainage: they're also designed to act as curb extensions that shorten the crossing distance for pedestrians.

"This addition to the project will benefit community members; not only will the project make residents and travelers safer, the rain gardens will add beauty and character to the intersections," says SFPUC's project page for the gardens.

As to how a rain garden actually works, the diagram below pulled from SF Better Streets helps lay out how gardens like these work:

In the case of the new rain gardens, plants and river rocks cover the surface, allowing a low-maintenance flow of rainwater to the mulch layer below, which will then redistribute the water into the planting soil, native soil and bedrock.

As for other areas in our neighborhood that could benefit from a rain garden, one only has to wait for a large rainstorm, such as this one from December of last year, to see where flooding occurs. But not all intersections meet the qualifications—areas must be at least two feet wide, have less than a 5 percent grade, and have bedrock at least four feet below the surface of the street.

While the rain gardens are finally done, the bike lane medians along Fell and Oak streets still have a ways to go. While Oak Street's are mostly completed, the city has yet to re-paint the green bike box at the intersection of Broderick and Oak street, or paint bike sharrows on the freshly-paved surface of Oak between Baker and Broderick streets. The lack of clear markings means that on any given day, cars can be seen idling in the bike lane, perhaps not knowing that it actually is one.

Meanwhile, Fell Street is still filled with temporary plastic medians, and work on completing the bike lane is still in progress, though workers have been noticeably absent of late.

We got a little rain earlier this month, now we just need a lot more to really test this gardens out.
San FranciscoDivisaderoNoPaUpper Haight
Feb 03, 2023